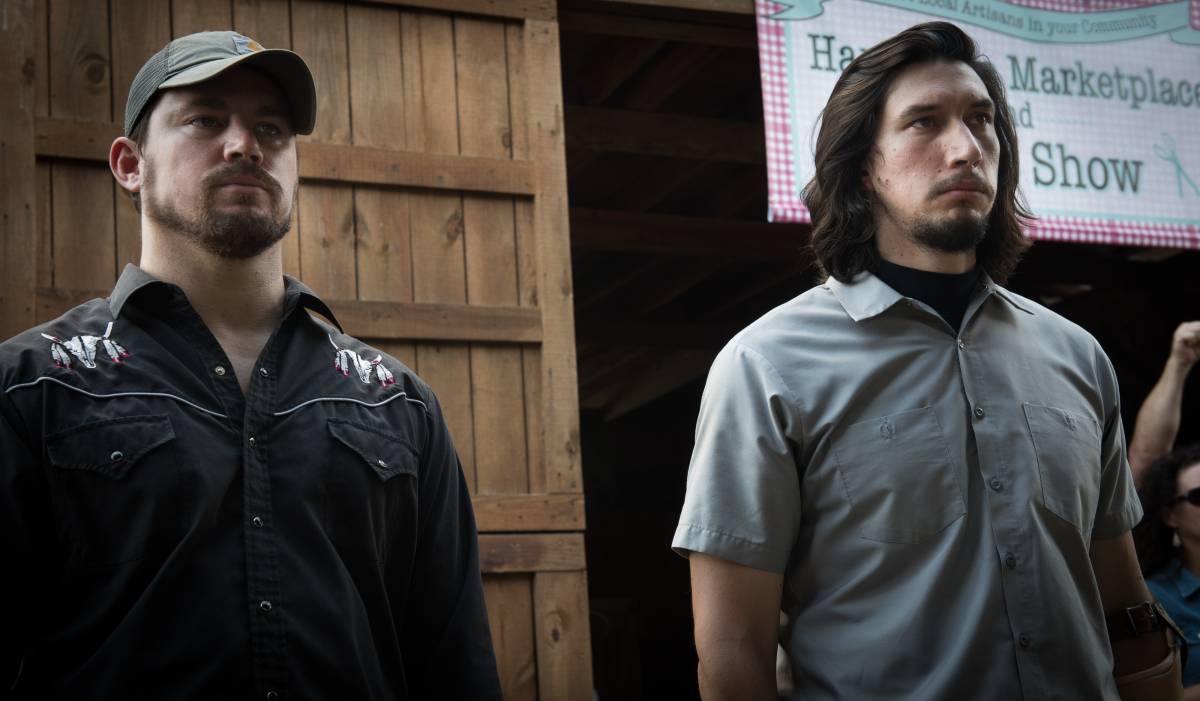 In 1995, Michael Mann remade one of his earlier films. L.A. Takedown (1989) wasn’t a cynical cash-grab as the remake towers over original thanks to many elements which were lacking in the original. L.A. Takedown was originally envisioned as being much more layered and sprawling, however limitations in casting restricted the complexity and intricacy of the film.

Fast forward to 1995 and the casting of heavyweight leads Al Pacino and Robert De Niro with supporting assistance from the likes of Natalie Portman, Danny Trejo, Jon Voight, William Fichtner, Val Kilmer, Amy Brenneman, and Tom Sizemore elevated Heat to one of the greatest portrayals of the criminal mind ever to be filmed. Much like Mann’s remake of L.A. Takedown or Alfred Hitchcock’s remake of The Man Who Knew Too Much, Soderbergh improves upon his craft from Ocean’s Eleven to deliver one of the year’s best films in Logan Lucky (one that feels fresh and altogether different from Ocean’s Eleven).

Having plundered three bank vaults, Soderbergh returns (after a four-year stint in television where he honed his craft on such projects as Godless, Red Oaks, and The Knick) having set his eye on a new treasure, the Charlotte Motor Speedway. In masterminding this plot, Soderbergh uses the working-class hero down on his luck archetype within the scope of the good ol’ boy culture as a vehicle to explore how luck is often used as a synonym for, and balm to, the effects of class on social hierarchy (this is not uncommon for Soderbergh as this subtle commentary on class pops up often in many of his films like Erin Brockovich and The Girlfriend Experience). Unlike the fresh polish and glamor of Ocean’s Eleven, our story is set in one of the poorest parts of the country, where one can quickly observe just how transformative the success of the heist would be for the Logan’s and their associates. This is, as Soderbergh puts it, “Ocean’s 7-11”.

Jimmy Logan (Channing Tatum) is a one-time football legend who blew out his knee thus dashing his hopes of playing professional football. Jimmy persevered through his injury and went on to work construction to make ends meet however Jimmy is fired after an HR representative sees Jimmy limping and corporate decides that Jimmy is an insurance liability. When Jimmy returns home, he discovers that his ex-wife Bobbie Jo (Katie Holmes) and her husband Moody (David Denman) are planning to move out of West Virginia to Lynchburg, Virginia with their daughter Sadie (Farrah Mackenzie). Jimmy needs to come up with the money to hire a lawyer to fight this move and suggests to his brother Clyde (Adam Driver) that he and Clyde steal the money from the Charlotte Motor Speedway during one of the slowest and least secure weekends of the year; while working beneath Charlotte Motor Speedway to resolve its sinkhole issue, Jimmy discovers that concession stand earnings are delivered to cash vault in the basement by way of pneumatic tubes. Due to a logistics issue, the heist gets moved up a week to the Coca Cola 600, the most secure and lucrative stock-car race of the year. To make this caper possible, the Logans call upon their extended network of accomplices, explosives expert Joe Bang (Daniel Craig), Joe’s brothers Fish “All the Twitters” (Jack Quaid) and Sam (Brian Gleeson) Bang, Jimmy’s sister Mellie (Riley Keough) Logan, among other colorful characters. The plan that they conceive includes colorful details like cockroaches painted with nail polish, gummy bears, fake salt, and a garbage fire. 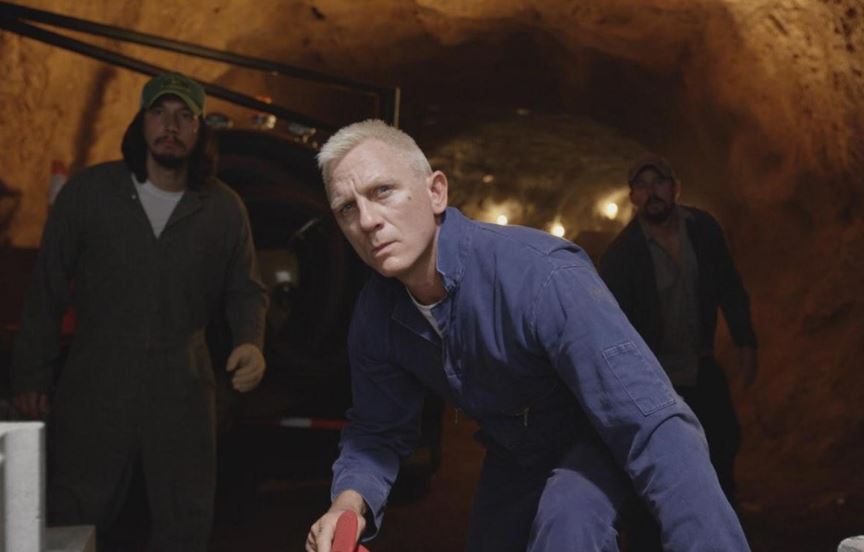 How two characters play off each other has the potential to ruin a film, so it is fortunate for Logan Lucky that Driver and Tatum play off each other perfectly. The chemistry between Driver and Tatum is almost palpable, Driver’s Clyde is a voice of reason to Tatum’s visionary Clyde, whose quiet confidence borders on beguiling and whose sense of humor is laced with righteous frustration. To have one Logan without the other is to have only half of the recipe as to what makes the Logans work and this screenplay showcases the talents of two of the best actors of their generation (Seth MacFarlane quips cheekily that if you were to add the Logans together you would get one complete normal person).

Tatum’s performance feels organic, a credit to Jules Asner (a native of West Virginia herself) partially basing the character of Jimmy on Tatum as Tatum, who grew up poor in Alabama, Mississippi, and Florida, attended college on a football scholarship until he dropped out and eventually turned to modeling and stripping (see Magic Mike). Clyde lays the groundwork for Tatum’s thoughtful portrayal that keeps the film from gathering too much momentum in descending into absurdity. Driver’s performance showcases his talents and allows the film to gently work its way to an incredible climax; this lackadaisically-paced first half would have not been possible without the characters of reason, namely Clyde and Mellie. The film boasts a nearly two hour run time but only slightly does it feel like the film ever strains and this is truly a testament to the tremendous talent of everyone involved in this project.

The supporting cast is excellent as well. Daniel Craig threatens to steal the show with those bulging blue eyes, blond bangs, tattoos, and a swagger that eclipses Tatum’s. Craig dispenses every line of Bang’s dialogue with a sneer, a character who feels entirely larger than life. Riley Keough gives a memorable performance, showcasing the same audacious spirit as her brother Jimmy but also is grounded in reality in the same manner as Clyde (she may be the most well-rounded character in the movie and my third favorite performance behind Tatum and Craig). Mellie is everyone’s well meaning sister with a great deal of bravery and resolute spirit. Joe and Fish Bang are funny every time they are on screen, their participation in the heist hinging on their insistence that it be carried out for moral reasons. Denman does a spectacular job as the well-meaning but somewhat irresponsible step-father Moody, engaging in car repartee with Keough with gusto and proving he can hold his own. Seth MacFarlane’s cameo is entertaining and informative – prior to seeing this film, I was underestimating just how much you could tell about a character by the way they pour a drink. I was extremely impressed that no characters overshadowed each other to a significant extent, each character had their own niche and I was never disappointed whenever we switched perspectives to show what each character was experiencing. There were stellar performances all around though one of the few nitpicks that exists with regards to the characters is that the accents are unfaithful to their regional roots.

Terrific acting usually builds on marvelous screen-writing and Lucky Logan boasts a vivacious script, pulsing with enough energy and color to leap off the screen. The question of the Logan family curse, while not central to this movie, evokes a great deal of empathy and raucous laughter from the audience. The sub-plots that are established get their own resolutions and nearly every loose end is tied up by the end of the film. Additionally, almost every joke connects which makes this one of the most entertaining movies of the year. This screenplay will no doubt be studied by future film students as an exercise in how to capitalize on every bit of sincerity in a story. It should be noted that, while the actual screenplay is credited to Rebecca Blunt, the screenplay was written by Soderbergh’s wife, Jules Asner. The use of a moniker while being involved in this film is not unique as Soderbergh directed, shot, edited, financed, and distributed the film under an assumed name as well.

In the aftermath of Logan Lucky, the news report refers to the escapade as the “hillbilly heist”. The best heist movies turn the logistics of theft into a captivating experience for the audience such that we revel in the individual elements of the caper. Bringing a group of misfits together who each bring something unique to the table to problem-solve against seemingly insurmountable problems is where the challenge lies, in exploring the logistical challenges until we can celebrate the collaborative triumph with the characters.

Soderbergh’s deft hand at directing is what makes this otherwise quintessential heist film greater than the sum of its parts, amplifying the comedic delivery by veteran actors and making what on paper is a summer blockbuster feel like more of an arthouse film (this reflects Soderbergh’s training/roots). Logan Lucky is a triumph of directing, acting, screenwriting, scoring (the soundtrack comes to us from David Holmes, the man behind the soundtracks for Ocean’s Eleven, Ocean’s Twelve, and Ocean’s Thirteen) and editing which coalesces into a refreshing movie-going experience that in no way feels like it belongs in the doldrums of August. Soderbergh definitively proves that the heist genre cannot be counted out in terms of innovation and comedy. Logan Lucky is an experience that is as exhilarating as witnessing a NASCAR stock-car prowl the track, moving with such seemingly effortless velocity that it leaves one breathless.

Verdict
Logan Lucky leaves you on the edge of your seat in anticipation, eager to discover what outcome or comedic antic is around the next left turn.
8.5
Cultured Vultures is a pop culture website established in 2013 covering all things gaming, movies, and more. We eat your words.
All The News On The Biggest Games