A Brief History of LGBT Themes In Vampire Media

Get ready for a sucking good time. 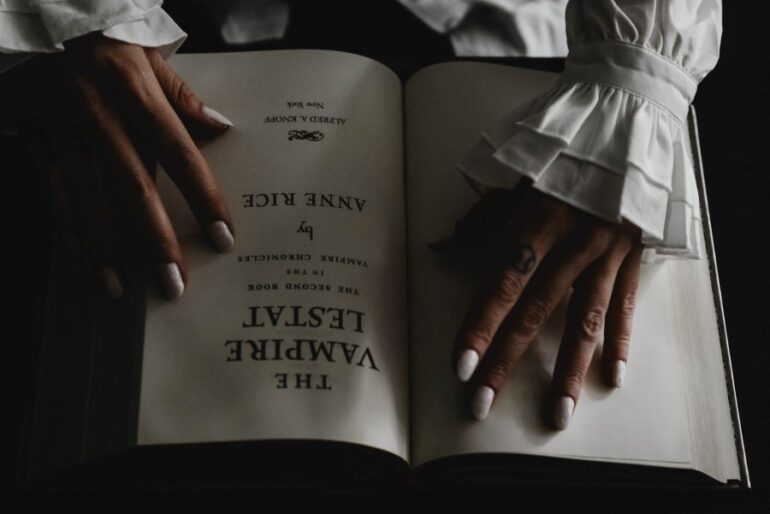 A Brief History Of LGBT Themes In Vampire Media

When I was doing my research for a The Route of Ice and Salt by José Luis Zárate review, I came across an article that examined the underlying gay tones of the film Interview With The Vampire. In particular, the conclusion of the article really caught my attention.

“For whatever reason, vampires work best when sucking blood is a thinly veiled metaphor for sucking cock…”

Despite the brashness of the word choice, I couldn’t help but agree with this point. I was always aware of the homosexual subtext of the movie ever since I first watched it as a teenager, but as I grew older, I noticed more and more that were a lot of stories that focused on vampires with underlying LGBT themes. It got me curious about how this trend first started out and how it has developed.

LGBT themes first popped up in horror literature during the 1790s and 1800s, when gay gothic authors – the likes of Matthew Lewis, William Thomas Beckford and Francis Lathom – wrote these stories as a subliminal expression. In a Huffpost interview, James Jenkins, co-owner of Valancourt Books, an independent press that specialises in the rediscovery of fiction that has previously gone under the radar, commented that “the traditional explanation for the gay/horror connection is that it was impossible for them to write openly about gay themes back then (or even perhaps express them, since words like ‘gay’ and ‘homosexual’ didn’t exist), so they sublimated them and expressed them in more acceptable forms, using the medium of a transgressive genre like horror fiction.”

However, the first truly gay vampire book to be released was Sheridan Le Fanu’s 1872 novella Carmilla. Predating Bram Stoker’s Dracula by 26 years, it features the protagonist Laura being befriended by the beautiful but mysterious Carmilla. However, as the story progresses, Laura learns that her new companion is actually a long dead woman, Countess Karnstein. This story does have something of a problematic idea in its very core – Carmilla’s vampiric nature along with her false affections for Laura almost demonises the idea of lesbian relationships, portraying them as predatory.

With that being said, Carmilla arguably acted as a template for future gay vampire novels, and even Carmilla’s future adaptations mitigated the problem of the original – the web series Carmilla that debuted in August 2014 was applauded for its portrayal of queer relationships. Gaining a loyal cult following, the show embraces openly gay and genderqueer characters throughout its three seasons. Though there is still an element of danger in the adaptation, the story takes a more healthy angle, with the main characters starting off as stand-offish towards each other, but then their feelings develop into a romantic relationship instead of the cat and mouse game from the original.

Even the most famous vampire novel of all has its gay subtexts. Dracula was written in 1897 by Bram Stoker. While he didn’t invent the vampire, he is often cited as the man who first came up with the traditional westernized version of the monster. He’s also a man whose sexuality has been debated over for a long time – his relationship with fellow writer Oscar Wilde has been a particular point of contention. When this argument is put to the side though, there is still some gay context to be found in the book. During a point where the protagonist Jonathan Harker is cornered by an entourage of female vampires, Dracula stops them by proclaiming “This man [Harker] belongs to me!”

Though pieces of vampire media with gay themes popped up in the coming years, such as the 1936 movie Dracula’s Daughter, the portrayal of LGBT characters and themes were strictly prohibited in cinema, thanks to the Motion Picture Production code that ran from 1934 to 1968. Eventually, this code became impossible to enforce and was subsequently abandoned. The 1970s would prove to be a golden age for vampire media – blatantly sexual vampires were beginning to pop up in cinema, ranging from Blacula, a 1972 Blaxploitation film, to the 1979 remake of Dracula starring Frank Langella.

In literature, one of the most genre defining pieces of vampire fiction was to be released around this time – Anne Rice’s 1976 Interview with the Vampire. This book was the first in The Vampire Chronicles series, and at the time of its release, it had a mixed response from critics. One of the more unfair reviews of the book came from The New Republic, commenting that ‘To pretend that it has any purpose beyond suckling eroticism is rank hypocrisy.’ However, the novel was and still is very popular, and despite the main plot essentially following a toxic queer relationship, it has become a staple of queer literature. The majority of the plot follows the relationship between Louis and Lestat, and what they share can be described as something in between best friends, worst enemies and lovers. A subplot that is omitted from the movie adaptation is that Lestat forgets to get Louis his own coffin, expecting them to sleep together for the first few nights of Louis’ new life.

The 80s was a complex time for vampiric media. On the one hand, they were more popular than ever in the mainstream. Anne Rice would go on to write follow-up books for Interview with the Vampire, first with The Vampire Lestat in 1985 and then Queen of the Damned in 1988, books which would continue to feature mostly gay characters. In film, cult vampire classics that came out at this time featured conflicts in the same vein of Carmilla, flipping the sexual vampire on its head. In 1983 film The Hunger, bisexual vampires lived a decadent life before meeting a grisly end. In the 1985 movie Fright Night, a young naïve boy is turned into a vampire. The 1986 film Vamp featured a group of horny teen boys meeting their doom at the hands of vampires. In 1987, The Lost Boys were wild immortal party boys seeking to break up the traditional family image.

On the other hand, tragically, the AIDS crisis was to leave its mark on vampire culture. In his 1993 book Hollywood Gothic: The Tangled Web of Dracula from Novel to Stage to Screen, cultural historian David J. Skal wrote that “when the definitive anthropological history of the AIDS epidemic is finally written, the irrational, vampire-related undercurrents of scapegoating, blood superstition, and plague panic will no doubt be prominent considerations.” This could be reflected in another stand out piece of vampiric cinema – in the 1998 film Blade, the title character takes a preventative serum to control his thirst for blood, in the same way people who were HIV-positive at that time were starting to take medication to prevent AIDS.

By the time the 90s rolled around, the AIDS crisis was more under control, and LGBT characters were finally beginning to become more prevalent in popular culture. Subsequently, gay vampire culture flourished, securing their place in modern culture. The idea of the ‘good’ vampire started to emerge – one example was Ulysses G. Dietz writing a series of books about a gay vampire who leads an otherwise normal life, outside of killing homophobes. The vastly popular Buffy the Vampire Slayer (1997-2003) has probably one of the best portrayed gay characters in television history in the form of Willow, played by Alyson Hannigan. Though she isn’t a vampire, Willow is Buffy’s best friend who ends up coming out as gay halfway through the series. Interview with the Vampire finally got its cinematic adaptation after being in development for years, which received mixed to positive reviews.

Though it has been with us for a long time, vampire media has cemented itself in the modern landscape. However, while straight vampires do exist, like in the Twilight franchise written by Stephanie Meyer, more often than not, vampires have proven to be profoundly gay. True Blood has very sexual themes and frequently features LGBT characters – even if you haven’t seen the series, the scene of Lafayette laying the smackdown on homophobic rednecks was a popular clip on the internet when it came out. Indeed, it really does appear that vampires seem to work best when sucking blood is a thinly veiled metaphor for- you get the idea.