Klaus: A Guide To The Cosmic Universe Of The Siberian Shaman Santa

Santa has never been sexier. 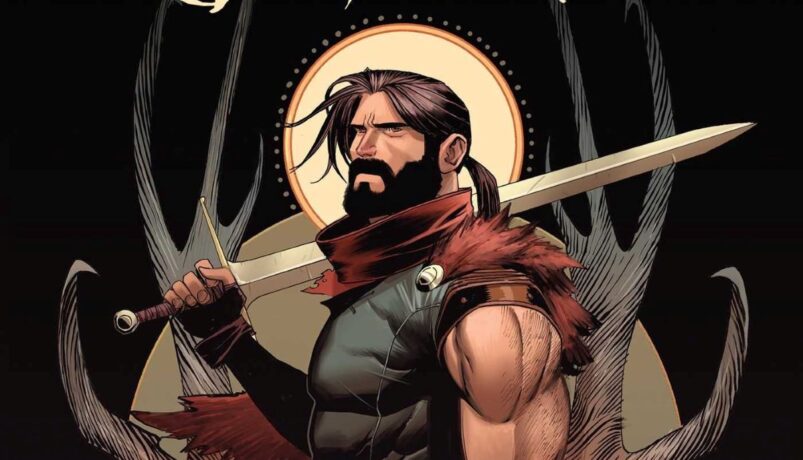 Alongside festivities like lighting a menorah, decorating a tree, or spending time with loved ones around a crackling fire, comic book readers used to celebrate the holidays with another annual tradition: reading the Nordic-Viking-infused Santa Claus epic fantasy comic series from writer Grant Morrison, artist Dan Mora, and letterer Ed Dukeshire.

Beginning in 2015, Klaus comic issues were published by BOOM! Comics and released monthly. Fans didn’t care if it was March or July: Morrison and Mora’s epic Santa Claus origin story series flew off the shelves all year. After the seventh and final issue was finished, and a single volume collected the beloved Yuletide series in one compact book, readers wished Santa would drop another Klaus comic issue in their stockings once again. Thus, a tradition was born.

Each December from 2016 to 2019, the creative team buoyed the holiday spirit with an oversized one-shot comic issue. Unfortunately, likely corresponding with the global pandemic, no annual issue hit the shelves in 2020 or 2021. These standalone issues, ranging anywhere from 25-50+ pages, expanded the universe whilst integrating familiar elements from the original 7-issue run. The one-shots slide through time as Klaus stops evil and spreads cheer throughout different decades in history. It’s a jolly good time for even the dourest holiday grinches.

Historically, comics love interpreting Santa. Superman saves the beloved childhood hero in Superman’s Christmas Adventure, a one-shot published in 1940. Santa Claus materialises as one of the Marvel Comics universes’ most powerful mutants in the 1991 Marvel Holiday Special issue. Comic books have cast Santa as a mutant, a villain, and in the case of Klaus, a sexy shamanic superhero. Morrison and Mora’s 2015 comic series imagines the folklore figure as a chiseled Nordic war hero who ultimately fights the Yule Lord, Krampus. If you haven’t read the narrative and visual masterpiece that is Klaus and feel bummed about the general sadness permeating these last two years, treat yourself to the perfect gift this holiday season.

However, this cosmic comic universe may intimidate unfamiliar readers. With so many characters, lore, and Nordic cultural parallels, you may find yourself curious about the importance of the elements comprising Klaus’ magical story. Just in time for the holidays, here’s a reading order and a guide to help further your appreciation for a wonderful comic series during the most wonderful time of the year.

Klaus becomes an immortal, an amalgam of myth, magic, and legend who delivers hope and joy to the world in the comic series. Morrison crafted this barbarian Santa Claus out of Siberian shamanism and Nordic culture. The Klaus version of Santa can be compared with Scandinavia’s mythical bringer of toys. This Nordic Santa, the Julenisse, does not necessarily live in the North Pole. Instead, like Klaus, he lives nearby. Children in Scandinavian countries find comfort knowing Julenisse could be as close as an adjacent forest or stream.

Morrison’s Klaus also practices meditation and convenes with the supernatural realm; a shamanistic Santa. In Siberia, Tungusic people, also known as the Evenki, not only participated in shamanic culture but were also reindeer herders. Shaman originates from the Tungus word saman. Saman can be translated literally as “one who knows or knows the spirits.” Klaus congregates with spirits throughout the comic series.

Siberian shamans used altered states of consciousness, achieved through consuming the mushroom Amanita muscaria, to interact with the spirit world. Although Klaus does not eat mushrooms on the page, artist Dan Mora frequently implicates the psychotropic properties linked with shamanism by rendering his colour palette with intricate, psychedelic hues. Siberian shaman dressed in red and white during the winter solstice. This choice of clothing colours proved intentional; they emulated the Amanita muscaria’s red and white appearance while gifting the mushroom to others. Klaus’ behaviour and the comic series visual motifs distinctly mirror that of the Tungusic shamanic practices. Morrison researched

It would take a whole essay to dive into every intricate facet Morrison and Mora allude to in this series. Derived from Nordic history, the rune Wunjo plays a constant role, denoting happiness and joy for those who work to attain euphoria. Klaus features circular imagery, referencing Norse mythology where the circle represents balance and the regenerative circle of life. As opposed to reindeer, Klaus opts to ride his cosmic sleigh pulled by wolves. Wolves are also crucial characters in Norse mythology, serving the god Odin as loyal companions; just as Lili remains loyal to Klaus.

Luckily, readers can enjoy Klaus without knowing the centuries of Nordic history. But understanding the research, time, and sensitivity poured into the creation of the sexy shamanic Santa story furthers the awe Klaus incites.

This dark Santa Claus retelling begins with the first seven issues in Klaus: How Santa Claus Began. Our titular hero begins as a man – a lonely yet formidable (and muscular) barbarian – wandering the forest with his pet wolf Lilli sometime in seventeenth-century Europe. Klaus journeys to Grimsvig, a town where his connections run deep. It is Yuletide season in Grimsvig. Except, the settlement’s tyrannical leader, the black-cloaked Baron, runs the town with an iron grip. Children are not allowed toys or gifts at Yuletide anymore. Fathers, brothers, or any male residents slave away in the coal mines all day.

Klaus, an empathetic, affectionate man, decides to deliver toys in the shadows of the night. He never questions performing an act of goodwill. The forest spirits recognise his selfless heart and imbue him with a little extra magic. Klaus serves the town because he sees a genuine need. A sinister force threatens the Yuletide spirit, so Klaus further moulds himself into the superhero Grimsvig deserves.

The luminary story continues in the two-part comic volume, Klaus: The New Adventures of Santa Claus. Klaus returns to save Yuletime, this time in the modern era.

In the first one-shot, Klaus and the Witch of Winter, the hero returns to Earth after apparently being shackled for decades as a victim of the Lunar War. Who knew Santa could be imprisoned by moon metal chains — on the moon? He breaks free, but the world has moved forward and irrevocably changed in his absence. A witch kidnaps a poor dad’s children on Christmas Eve. Of course, Klaus takes Lili and his wolf pack to locate the missing children.

This installment sets Klaus against an unknown enemy: modernity. He grapples with lost time, piecing together the changes required in his unintended sabbatical. Klaus and the Witch of Winter revitalises his character, capturing the straightforward tenderness he inhabits. The issue also introduces The League of Santa Clauses. Santas from countries worldwide unite with Klaus in an epic showdown against the antagonists. Mora flexes his artistic skills, repurposing historical design elements to fit his vision of this league of extraordinary Santas.

Klaus and the Crisis in Xmasville transports readers back in time to the magically strange past of the 1980s. A family stumbles into Xmasville, a town where soda ads furnish every building and all its male citizens don Westernised Santa Claus apparel, complete with belt and hat. Things take a not-so-jolly turn when an Underworld-like Santa from an alternate dimension attempts to line his pockets with silver and gold through the guise of soda corporation, Poca Cola.

The one-shot comments on cheap marketing tactics and the ruthlessness of capitalism. A usually faceless corporation attaches itself to a malevolent face — in the form of evil multiverse Santa. Hilariously, the issue isn’t even set during Christmas. No, Anti-Santa wants to cash in on corporate thrills and use the Santa image to produce a year-long holiday season akin to Xmasville’s current state. Klaus and the Crisis in Xmasville drips with ironic humour. Mora’s art adopts a nostalgic aesthetic, reminiscent of the 80s era the narrative depicts. Watercolours evoke a saturated look separate from the bold, vibrant colours seen in other Klaus comics. At its core, Crisis in Xmasville is Klaus vs. Greedy Soda Lord Santa.

Morrison and Mora bring new, mortal characters into the mix, further expanding the Klaus-Christmas-themed cosmic mythology in the third comic volume. Klaus still binds the story together as the effervescent, muscled centrepiece of goodness. This time, however, Klaus enlists the aid of a neglectful father-turned-snowman during an apocalypse and we see the relationship between Klaus and an orphan unfold throughout the decades. It’s not a one-wolf open sleigh ride for the magical shaman in Klaus: The Life and Times of Santa Claus.

Remember that 1998 “Christmas” film Jack Frost where Michael Keaton’s character dies and reincarnates as a snowman? The Klaus and the Crying Snowman one-shot essentially takes that concept and converges it with a Norse mythology-inspired cosmic apocalypse war. Sam wakes up as a snowman without his memory. Marvelling at his Frosty-like appearance and meagre stick arms, Klaus enters the scene with a message of hope. Klaus recounts their tale of grandeur together. They battled comet-people and travelled to save the universe on the distant planet, Titan. Norse gods, Ragnorak, time travel, and snowman tears force Sam to confront his past if he wants to return to human form.

Both one-shots focus on telling stories about fathers and sons. Klaus slides into the fatherhood role himself in Klaus and the Life & Times of Joe Christmas. The second and most recent one-shot evokes emotion without dialogue. Instead, the 25-page, wordless issue is laid out in splash page holiday calendar format. According to the title, Joe Christmas takes the helm as our central character. We see him dressed in a Westernised traditional Santa Suit on December 1. From there, the years reverse but the calendar dates move forward chronologically. Beautiful artistry snapshots days in the life of Joe Christmas and his extraordinary, lunar adventures with Klaus, his wife, and one-eyed, shape-shifting cat Tiger.

The final page clarifies Joe and Klaus’s initial connection. Spoiler alert: someone dropped off Joe on a doorstep and Klaus took care of him for the rest of his life. Over time, Joe became the Robin to Klaus’s Batman. Their relationship extends beyond fighting together against Norse monsters and saving the world from intergalactic threats. Though Klaus doesn’t age, he takes pride in Joe through every moment of the mortal man’s life. Even when Joe surpasses Klaus in age, Klaus functions as a father figure to Joe. Without dialogue, Klaus and the Life & Times of Joe Christmas draw attention to the splendour and minutiae Mora’s art embodies. The images expound upon Klaus’ universe history, hinting at events mentioned in previous comic issues. But the images pull the veil back on another, celebratory history as well; the history shared by a found family (and a cat).

READ NEXT: 20 Best Christmas Comics To Read During The Holidays