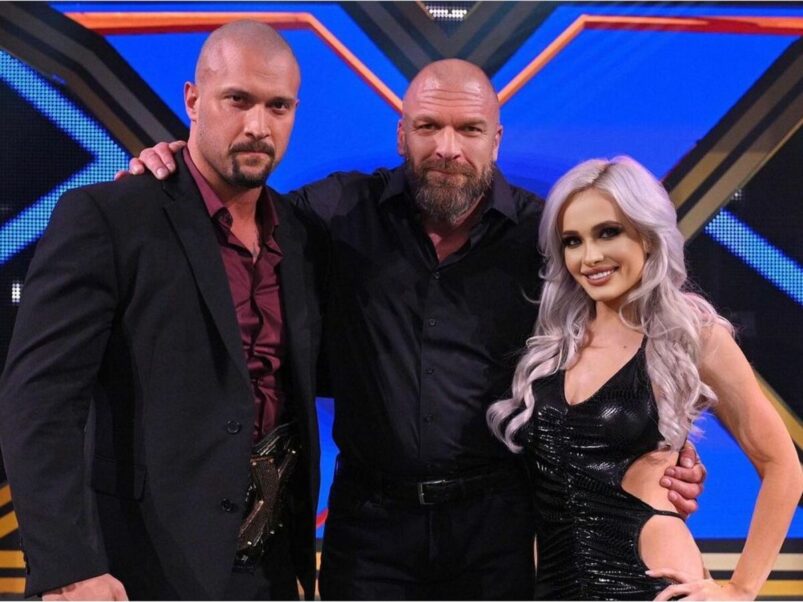 As part of Triple H’s soft reboot to WWE’s main roster, the former NXT duo of Karrion Kross and Scarlett Bordeaux made their triumphant return to WWE as part of last night’s episode of SmackDown Live. Both Kross and Scarlett found themselves released from their contracts during the course of last year, despite Kross being considered a potential major star by Vince McMahon.

Kross and Scarlett each made an impact as part of the independent scene during their downtime, competing for promotions such as Control Your Narrative, MLW and even appearing on Ric Flair’s Last Match supershow. However, it seems that relations hadn’t suffered too much between the two parties, as the former NXT Champion and his valet were quick to take Hunter’s offer up on a huge return to the main roster, not only as a duo this time round but also without the awful helmet he was forced to wear during his debut run.

Karrion made his presence felt immediately by assaulting Drew McIntyre during his stare-down with Roman Reigns, a clear indication that Kross is intending to be involved in the championship picture after Clash at the Castle. Scarlett placed the iconic sand timer down in front of the Undisputed Champion, who stood in the ring bewildered during this savage attack.

It’s great to see Karrion and Scarlett back in WWE and hopefully this will lead to a much more successful run than what we saw back in 2021.

READ NEXT: WWE Clash At The Castle: 5 Matches We Want To See