A return to form in the big leagues? 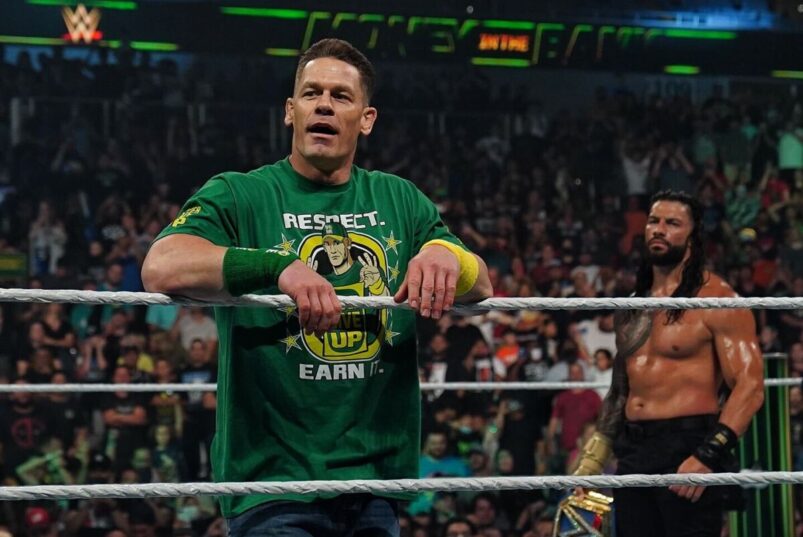 At the 2021 edition of WWE Money in the Bank, arguably the biggest wrestling megastar of all time, John Cena, made his return home to challenge Roman Reigns for the Universal Championship. Cena and Reigns broke global headlines both inside and outside of the wrestling industry, which couldn’t have come at a better time for the world’s premier wrestling promotion.

After suffering through the effects of the pandemic for well over a year, WWE have needed a proverbial shot of adrenaline to help them get off the ground running again. With live crowds returning as part of Money in the Bank weekend, this was the perfect opportunity for shocking returns, cameos and headline-worthy moments. That’s precisely what we received in the closing moments of a pay-per-view stacked full of notable results.

John Cena returning in time for SummerSlam was common knowledge, but the crowd responded as if they were totally unaware of the former 16-time world champion’s intentions to make his triumphant comeback. It was a glorious moment to watch unfold, children and adults alike were losing their minds as ‘My Time is Now’ blared out through the arena. His epic staredown with ‘The Tribal Chief’ was a moment that will forever be etched in history, something that should mark the end of the pandemic era and the beginning of WWE’s return to form.

But has John Cena’s return truly saved WWE from the downward spiral?

The night following Money in the Bank, WWE kept the returns coming with the likes of Keith Lee and Goldberg both making their on-screen returns. Lee was very much given a warm welcome after 5 months of inactivity. Goldberg, however, was not. Once again, WWE have chosen to turn to the Hall of Fame star for yet another championship feud. The last we saw of Goldberg, he opened the 2021 Royal Rumble in a similar title counter against Drew McIntyre, and now he returns to rinse and repeat the routine with current champ, Bobby Lashley.

This is all well and good for Lashley, who is being given a high profile match worthy of a SummerSlam card, but the over-reliance on Goldberg as a credible threat and challenger to any champion is a continued negative trope of modern WWE programming. Fans have long voiced their distaste in Goldberg, ever since WrestleMania 33, where he lost to Brock Lesnar to definitively end their fantasy feud. Since then, ‘Berg has competed (and demolished) several of WWE’s top stars, leaving them in a tough position to recover from.

Hopefully, WWE have learned their lesson over the years and will continue to utilise Goldberg to simply give his opponents a tough fight, like how they did with McIntyre in January. But the problem remains of WWE continuing to see these part-time superstars as the quick-fix solution to a dry period.

Where I see the same argument being used for John Cena’s return, we must consider this from a different perspective. Cena has been absent from WWE TV since last year’s WrestleMania, at which he competed in an understated main event against Bray Wyatt in the first-ever Firefly Funhouse match. After convincingly losing to Wyatt, Cena vanished off the face of the wrestling Earth, leaving nothing to suggest he’ll be returning to take vengeance on The Fiend anytime soon.

Cena was gone for over an entire year, with no mention aside from the occasional history lesson on commentary. This has given Cena the time to focus on his other passions, including his most recent theatrical release, Fast 9. It has allowed wrestling fans to develop a longing for the leader of the Cenation, letting the buzz build and make way for huge dream match material upon his return. Fans were more than happy to jump out of their seats and wave their hands uncontrollably in front of their face when the green-shirt sporting legend skipped out on stage. Compare that to a Goldberg return and you get the idea.

So what will all this hullabaloo mean? Will WWE learn from their previous mistakes and allow for more hyped returns such as John Cena’s? Will John Cena’s involvement even pay off? Will SummerSlam achieve the desired buy-rates? We already know that SummerSlam is expected to be one of the biggest possible wrestling events of the year, with it returning to actual theatres for the first time since WrestleMania 2, but at the very end of the day, it’s the Peacock subscriptions ans weekly ratings that make the moves for WWE.

I imagine that Cena’s weekly appearances from here on throughout the summer will provide WWE with the necessary boost in the short term, however there’s a lot for the company to take away from this whole ordeal, we’ll just have to wait and see what happens once the dust settles.

READ NEXT: Can Goldberg/Bobby Lashley Save SummerSlam 2021?