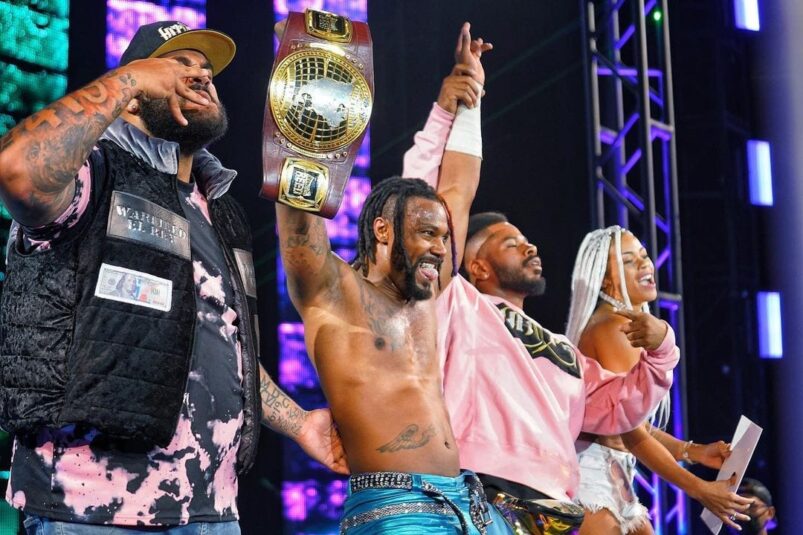 Hit Row’s charismatic leader, Isaiah ‘Swerve’ Scott, has finally won his first singles championship in the form of the NXT North American Championship following his victory over Bronson Reed in a stellar main event. The man formerly known as Shane Strickland and Killshot, ‘Swerve’ has fought through a lot of adversity and maintain a great deal of patience before finally being given the chance to shine in a singles role.

‘Swerve’ originally captured the hearts and minds of the NXT Universe during the inaugural NXT Breakout Tournament, the sequel to which is planned to take place in a couple weeks time, and made it as far as the semi-finals before being eliminated. Fortunately, the former EVOLVE Champion’s momentum wasn’t halted by that particular loss, and soon found himself competing in the Cruiserweight Division upon its revamp in 2019.

Despite Scott’s natural charisma and the oodles of talent at his disposal, he never quite made it as far as we all expected him to. After a few lost feuds and underbooked matches, ‘Swerve’ lost his TV time and was soon used as a glorified enhancement worker.

Following a heel turn at the expense of the former North American champ, Leon Ruff, ‘Swerve’ morphed his character into an arrogant, flashy villain, using his repertoire of unique, high-flying offense to chip away at bigger competitors and threats such as big Bronson Reed and Dexter Lumis. After dispatching of Ruff, Scott went on to re-debut alongside the hip-hop tandem known as Hit Row, bringing with them a thuggish attitude, looking to take over all corners of NXT.

With a new theme song breaking Spotify charts and a new wave of momentum to ride, Isaiah Scott burst out into the singles division with a fresh feel to him, soon finding himself in the main event scene challenging for the secondary championship. To many’s surprise, Scott picked up the upset win and walked away with the title in his first attempt. This has been huge for his and Hit Row’s stock, making the NXT Universe look at them in a different light as potentially the future of NXT.

NXT has thrived with stables such as the Undisputed Era on top, and Hit Row could be no different. There’s been a distinct lack of black representation in NXT’s lineage, so by giving superstars such as Top Dolla, Ashante ‘Thee’ Adonis and Briana Brandy the opportunities to shine in their respective divisions, we could very well see another quadruple title lockdown in the ranks of the black and gold brand.

‘Swerve’ and his new compadres bring with them a swagger and attitude that we haven’t seen from any other acts in quite some time. They have our attention, now they need to run with the balls they’re given. Scott is no doubt going to impress with his North American title run, with several dream matches now available for him to explore. Already imagining his potential feuds with the likes of KUSHIDA, Roderick Strong and Santos Escobar could make for a really exciting summer.

The North American title is a great way to get eyes on Hit Row as they continue to grow in NXT. Hopefully we won’t be seeing the title hot-shotted between Scott and the big Australian as we inch towards NXT’s Great American Bash and then subsequent SummerSlam weekend TakeOver show, that would do a lot to damage Hit Row’s momentum and likely lead Scott back into the realm of obscurity. There’s a tonne of untapped talent ready to be explored here, so please don’t waste it, WWE.