Conversation includes music, art and what true happiness looks like. 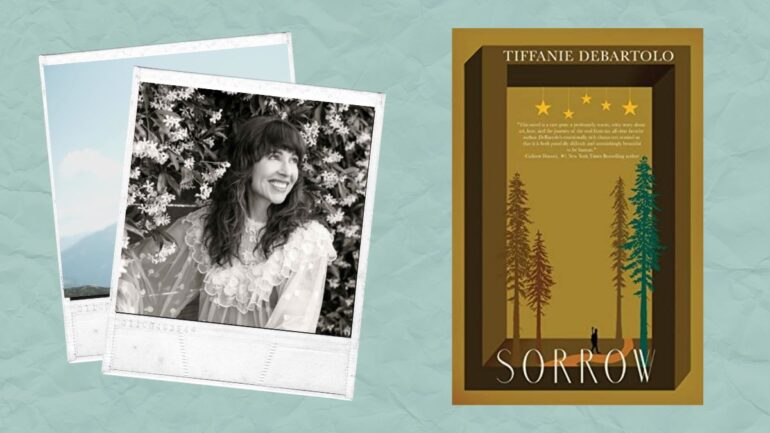 I sat down to speak with Tiffanie DeBartolo about her latest book Sorrow, which follows 30-something musician Joe on his journey to reconnect with an old flame, the eccentric artist October – and possibly rediscover his self-respect along the way.

Tiffanie is the founder and chief executive of Bright Antenna Records, whose roster includes The Wombats, Sports Team, Wilderado, Prep, and more. She co-founded the ShineMaker Foundation, a charity organization dedicated to making the world a better place. She’s also written the critically acclaimed books God-Shaped Hole (2002), How To Kill a Rock Star (2005), and the graphic novel Grace: Based on the Jeff Buckley Story (2019) and written and directed the film Dream for an Insomniac (1996).

I have to say, I love your book. It’s a beautiful book, and I’m so glad I got to read it.
Thank you so much! That means so much to me.

Your novel, Sorrow, takes some inspiration from a song by The National. Is that how it always starts for you when it comes to writing a book? A snippet of inspiration and then it builds from there?
Oftentimes yes. Music is a really big part of my life, and I get a lot of inspiration from music. Pretty much every work that I’ve ever written, there’s something attached to music. My first novel, which is called God-Shaped Hole is inspired by Jeff Buckley. And for this one, I had heard a line from a song I was listening to one day. It’s actually the song Pink Rabbits by The National, even though they have a song called Sorrow, and a couple of the lines from Sorrow are in the book, but it was the song Pink Rabbits that really inspired me. That was a line in it that sparked this whole scene in my head, and I remember writing that scene first, and it ends up way later in the book. But that was kind of the impetus for starting this novel, so it’s pretty magical when things like that happen.

So it begins like that, but after that you go like, here’s my structure, here’s my plot, my 50 page-edit…?
I never have any of that. I had that scene, and then I had to figure out who these people were, and why they were here. And then I start from scratch. I don’t outline books when I’m writing them, I just…write, and discover. It’s like a journey, discovering who these people are and what they want, what they’re doing. So I didn’t have a plot, the plot reveals itself when you get to know the characters. That’s the fun of it for me, figuring it out along the way.

In the novel, the protagonist Joe has two obsessions, trees and guitars. What would be your two obsessions?
I would have to say, my two biggest obsessions in life are probably U2, and my dogs. I have two giant Irish wolfhounds. I live where Joe lives, in Mill Valley California, so I am pretty enamoured by the Redwood tree as well. I hike in the forest every day. But I didn’t know anything about them, and when I realised how much Joe loves them, I started researching them. Like “Oh my god, these trees are amazing! How have I lived with them for so long, and I didn’t know all these things about them.”

Wait, so Joe loved trees before you knew about them?
Yeah! And I had to research them. Same with guitars; I love music but I’m not a musician. I work with musicians, and there are people in my family who are musicians, so I had to really turn to them and say: “You gotta teach me about guitars. What would he love, what would he play? Tell me how they sound, and show me what they look like.” It’s so fun to get to do that, and be like, I’m learning so much from my characters.

A few times in Sorrow, Joe and October discuss their favourite words. Do you have a favourite word?
I love that question! Well, you know, one of the words that they fall in love with in the book is one of my favourite words. It’s ‘saudade’, although I’m not sure if I’m pronouncing that right. I love that word, I love what it means. So moving, the definition of that. The same with that one word she talks about in the beginning, ‘desiderium’, which is another one I really, really like. One of my other favourite words is so funny, and I just like the way it sounds, ‘tangerine’.

That is a nice sounding word. [We laugh] Since that’s one of Joe’s favourite words, and yours as well. ‘Saudade’ is this feeling of longing or nostalgia, usually catalysed by music or art. Are there any songs or art pieces that bring out this sentiment in you?
Yeah! I think a lot of the art that I’m drawn to, whether it’s music, or a painting, or words, books…it just gives me that feeling, you know? It’s described as a sense of nostalgia for something that never was. It’s kind of like the theory one of my main characters talks about in my first book, God-Shaped Hole, explaining that we all have these wounds in our souls, and this pain that we feel but we can’t really explain it. We’re constantly trying to heal that wound. For me, that’s what that word means. There are certain songs that I’ll hear, that will make me feel that sense of longing and loneliness, but not really know what it’s attached to, if that makes sense? There’s something beautiful and poetic about that.

I think we often pitch that sentiment as nostalgia, and I never really had a particular word to kind of pin it down to. But when I read your description about it, it was like “Ohhhhh! That’s what I was feeling.”
I’ve kind of felt that my whole life. Sometimes I’ll be walking down the street, and I’ll see some random house, and it’ll just hurt your heart. And you’ll be like, “Why?” That’s what that is for me.

I have to ask, sorry we’re still on the word thing. [We laugh] You also mentioned the word ‘heliotropism’. Is that any chance that this is a link to the Jeff Buckley and Elizabeth Fraser song ‘All Flowers in Time Bend Towards the Sun’?
Yes! You know, it’s so funny that you asked that, because not many people know that song, but that was where I learned that concept, was from that beautiful, beautiful song. But I didn’t know there was a word for it. And then, when I was reading about trees, I stumbled upon that word, and I was like ‘oh my god, it all ties back together’.

October does these performance art pieces and projects. One of these projects is 365 Selfies. If you were doing this project, what would your day one selfie look like?
That is a good question. What would I do on day one? I would do like, a day long video of me kissing my husband. Start it off with nothing but love. [We giggle]

That would be a good start! In the novel, the subject of happiness is often discussed. And according to Aristotle, happiness is the supreme value and goal of one’s life. In your opinion, how does sorrow exist in relation to that?
I don’t know…For me, it’s attached to this idea of listening to your heart, and when I realise that I’m living in joy, and that I feel, what to me, is happiness. Happiness to me is like being satisfied in the moment, like I’m in the moment, and I’m appreciating it, I’m grateful for it, and I want for nothing else but this moment. The only times I feel that is when I’m being completely true to myself.

The interesting thing about Joe is that some people go through life not knowing what they want. They suffer, but they don’t know what they are suffering about. Joe knows what he wants, he just doesn’t have the courage to go after it, and I think that is so much more painful to exist like that. So for me, in the times of my life when I feel one with myself and the universe – however you want to describe that sense of true happiness – to me it’s when I’m listening to my heart and following my dreams and being true to myself.

I’m hoping that when people read this book, they’ll really ask themselves: “Am I doing what stirs my soul?” And if not, it’s not too late. It’s not easy to live that way, I think we all struggle with it because it’s scary to kind of just abandon yourself to your feelings and your dreams, but I think it’s the most rewarding way to live, even if you fail miserably, which I think we all do occasionally.

What lights up your soul? Chase after that.

READ NEXT: 7 Most Exciting New Books of October 2020