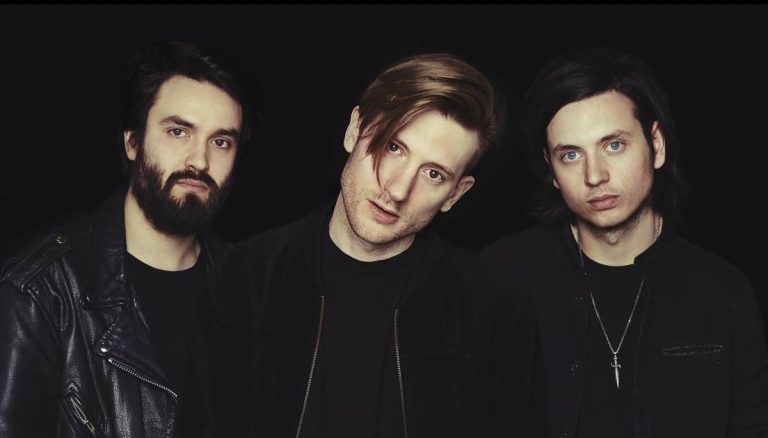 When you first hear Dinosaur Pile-Up, it’s not something you quickly forget. Their own brand of alternative earwiggery has found a welcome home in my music library over the past five years, ever since I first heard their Freshman effort, Growing Pains.

Blending vicious hooks with filthy guitarwork and what sounds like a genuine hatred for their drumkit, the line-up might have changed a lot in recent years, but the same raw energy is there to delight and invigorate even the most conservative of listeners.

After following up Growing Pains with Nature Nurture in 2013, DPU are set to return with Eleven Eleven (hopefully) at some point this year. First single 11:11 hints at the same level of good ol’ dirty rock from the trio and I for one can’t wait to hear more.

I recently talked to Michael from the band about the future, the past and terrifying green birds.

Hey Michael, how are you?

Pretty jaded, just got back from a little jolly at Glasto.

So, Eleven Eleven. What can you tell us?

It’s the name of our new record and it is fucking badass. We’re really proud of how it has come out and can’t wait for people to hear. Expect monoliths.

How did the recording process go for it? Do you find it gets easier the more you mature as a band or is it harder to keep innovating?

The recording process for the album was completely different from previous stuff because it’s the first we’ve done as a band which you can definitely hear in some of the tracks. There is a lot more of a live feel to them which is what we were aiming for. It’s something Matt wanted us to do for the last record but circumstances at the time meant we couldn’t.

You’ve often be labelled as a “grunge” band. Is this an association you have grown to accept or just want to disassociate yourselves from?

I think we used to be really worried about people labelling us because it felt like ‘oh just another grunge band’ but it’s not anything we feel too strongly about now. We all love that era of music so it’s a compliment really.

How have your fortunes changed since the release of (the quite frankly excellent) Growing Pains back in 2010?

N’aw thanks! I guess we’ve just grown more in a pretty organic way. We’ve been able to tour all over the world and play with some incredible bands so I guess it’s been going pretty well.

You have gone through quite a few line-up changes over the years. How do you adjust as a band to new members coming in to replace others?

It’s never really been an issue because we’ve always been friends with anyone who has come in so they know how weird me and Matt are already. We’ve been playing together for five years now so they have to adjust to us haha.

Do you have any gigs this year you’re particularly looking forward to? You’re in for a treat with Bestival.

Yeah we can’t wait for Bestival, gonna have to start planning our costumes! Really excited to be going back to Summer Sonic this year because Japan is fucking incredible and there are loads more killer shows in the pipeline!

We’ve just put together our albums of 2015 so far. What are your three choices?

Kendrick Lamar – To Pimp a Butterfly

Run the Jewels 3 when it comes out.

Why should we be pre-ordering Eleven Eleven as soon as it becomes available?

Because it’s going to be the best rock album of th10) A year.

And finally, who would you rather take on in a fistfight: Orville or Sooty and his mates?

I had to look up what an Orville was and it’s fucking horrifying so I’m going Sooty.