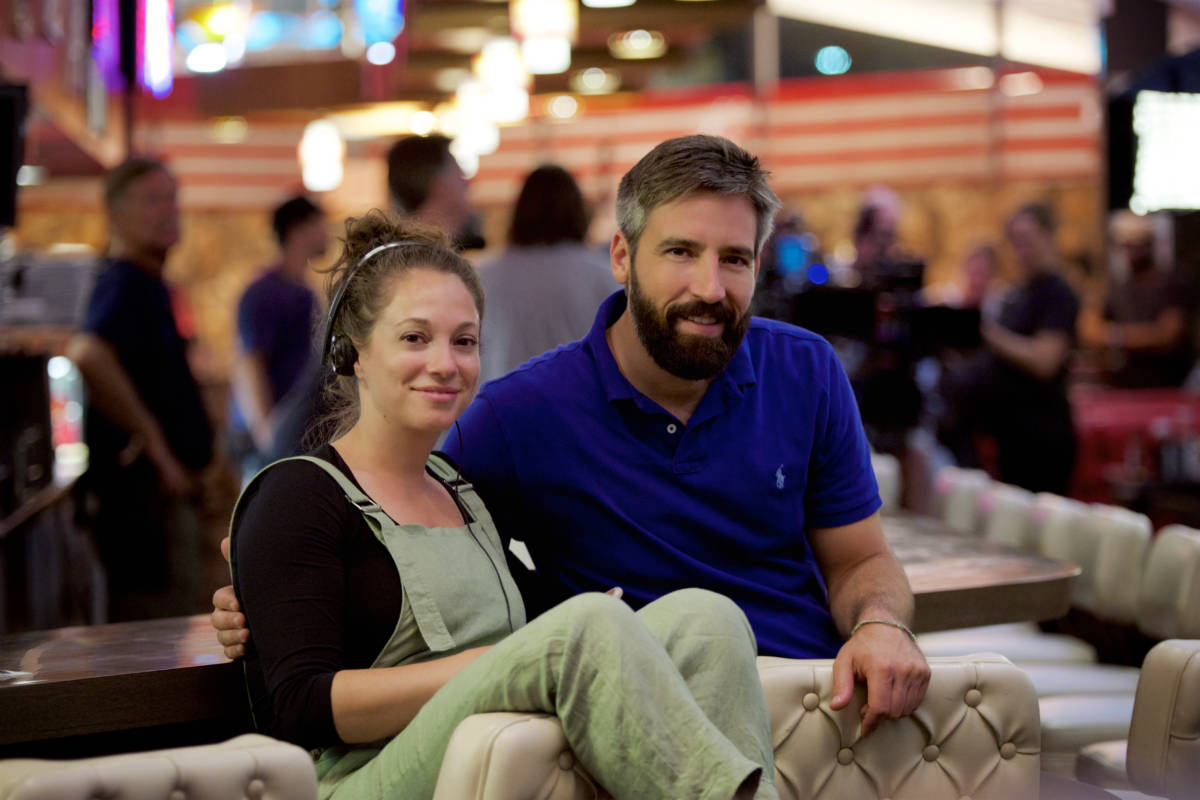 Cultured Vultures had the opportunity to sit down with director/co-writer Bill Holderman and co-writer Erin Simms to discuss their new film, Book Club, during a roundtable interview.

On Diane Keaton’s montage scene:
Bill Holderman: We were on set about to shoot that scene and we were rehearsing it. The costume that we had was this sort of elegant white jacket. She came out and the joke wasn’t working. It was like, “You look great!” We were panicking and we were a low budget movie. It’s not like we had a series of costumes waiting in the wings. We were shooting near her home and she was like, “I’m going home.” She goes home and the last thing you want to do in the middle of rehearsal is get an actor off set. I’m like, “Oh, no, there goes our day.” Ten minutes later, I get a call to meet Diane at her trailer. I go down and she’s brought back from her own closet all these beautiful but kind of out there, outlandish pieces from designers and the thing that ended up in the movie is a beautiful plaid poncho which we make fun of and I’m sure it’s from some designer that’s going to kill us for it. That’s a testament to her. She went home, grabbed her own thing, and was like, this is going to be great. To have actors at this level —these legends and be so engaged in the process and want to solve problems— this was a dream come true.

Erin Simms: I think part of the thing that works about the movie in terms of comedy is that each one of these women is bringing a big history with them. When Diane Keaton goes out in that jacket, you actually believe that Diane would go out in that jacket. Same with Jane. You believe she would bring the books into the thing. You’re bringing that sort of to the table, which wasn’t part of the plan but you feel it.

Bill Holderman: It was a big part of the plan because we wrote the script specifically for Diane. Her name is Diane in the movie still.

Erin Simms: Okay, it was the plan.

Bill Holderman: Jane’s name in the script was Jane up until a couple weeks before pre-production. We originally wrote it with them as archetypes in a way because we do have such history and we do know their filmography so well and we have a relationship as audience members. You don’t ever think you’re going to be able to cast them but when you do, it’s a gift that keeps on giving because we wrote it for them and it’s such a natural direction for us to go.

On casting Don Johnson given the role that the 50 Shades books play in the film:
Bill Holderman: The thing that was amazing about that—so Don Johnson and Jane Fonda have been friends for 40 years. When that idea came up, obviously, we were like, oh, that’s really interesting because he’s obviously Dakota’s dad and that’s sort of the meta of that. The thing that was great about that was when I first met with Don was not that that we were going to play with the idea that he was the father of the actress that starred in these movies but he understood the cultural impact of the impact of the books so well that I didn’t have to explain, like he was immediately like he gets it because he’s lived around it so much. For us, it was one of those things where Don so understood what we were doing because our movie is not about the specificity of the books but it’s about the cultural shift and impact that they had. Don really gets that.

Erin Simms: He really wanted the opportunity—he really wanted to work with Jane Fonda. What actually happened is that we went back and watched a movie. He did a small that he did with Chris Messina —I don’t remember what it was called— and Don is  amazing in this movie. It had been a while since I had seen him in anything. We really cast him because of that film and because of how good he was. He’s amazing in our movie. We weren’t just going to cast him in our movie because he’s Dakota’s dad — never, never, never! That’s sort of a very cool fun fact for trivia.

Bill Holderman: Right. But also after casting the four women, we really talked with them because they’ve been in the business for so long. They have actors that they know really well and sometimes that history is not great. For us, we really wanted those dynamics to be comfortable and easy. The fact that they were friends and someone she wanted to work with.

Bill Holderman: It does not.

Paramount Pictures will release Book Club in theaters on May 18, 2018.