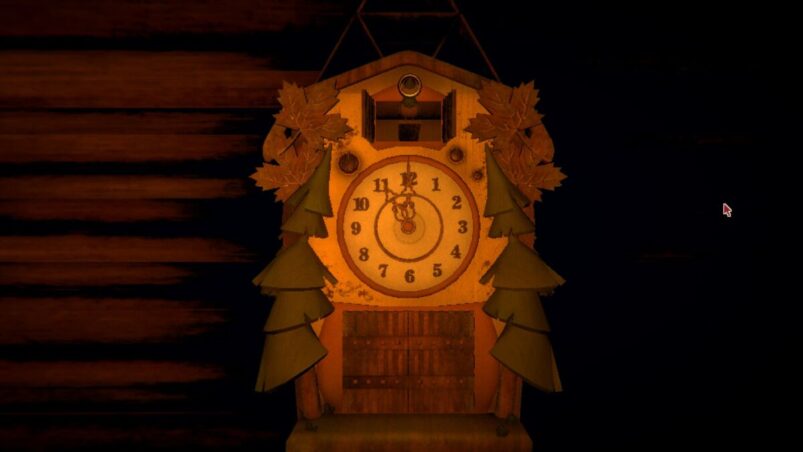 Though it may not seem like it at first, the clock will be the key to the player’s salvation and escape from the cabin in Inscryption. Of all the cabin puzzles, the clock has the most amount of stages to fully complete. This curious contraption has a twisty path to unlocking it and we’re here to be your guide.

Here’s what you need to to know about the clock puzzle in the cabin in Inscryption.

Players can find the clock directly behind their seat at the playing table. The clock has three knobs that relate to each clock hand.

To unlock stage 1 of the clock, players will need to set the clock hands for 11 o’clock. This means that the large and medium hands should be set at 12, while the small hand needs to be set to 11.

After completing this stage, the clock’s cuckoo will pop out with a golden ring. This ring isn’t needed for the rest of the clock puzzle, but will be important later in facing the final cabin boss.

Stage 2 of the clock puzzle is where things get complicated and morbid. In fact, this stage is less about the clock and more about getting an item that will essentially unlock the second stage for you.

The first step to opening stage 2 of the clock is to open the chest puzzle with the key from the safe. You should then complete the bottom left combat puzzle to open the shelf, which will reward you with the Caged Wolf card.

The goal now is during any combat encounter to play the caged wolf card and have it be eliminated from enemy damage. This will free the wooden wolf figurine behind the mysterious narrator. Walk over to the opposite wall and pick it up.

Once you have the wooden wolf figurine, move to the right until you see a contraption with a wooden squirrel figurine holding a golden dagger. Place the wolf figurine opposite the squirrel for the machine to activate and unlock the dagger.

The dagger will join the player’s other pack items on the playing table. During any combat encounter where you have the advantage and will win, select the dagger to stab your right eye out.

Once you land the killing blow on your opponent in the encounter, the mysterious captor will offer you a chest full of eyes for you to replace. Select the eye surrounded by a blue glow and shifting sigils.

After the in-game character replaces their eye, stand up and go to the clock. The magical eye will reveal blue and pink paint strokes on the clock that indicate the correct position of the clock hands, completing stage 2 of the clock puzzle.

The bottom portion of the clock will open, revealing another talking card, the Stunted Wolf, as well as a roll of film. Just like the ring from Stage 1, the roll of film is necessary for escaping the cabin.

As a creepy horror-mystery game, it’s perfectly fitting that a solution to one of the puzzles in Inscryption would involve self-mutilation. Luckily the replacement magical eye players can be used for other secrets and interactions as well for further exploration.