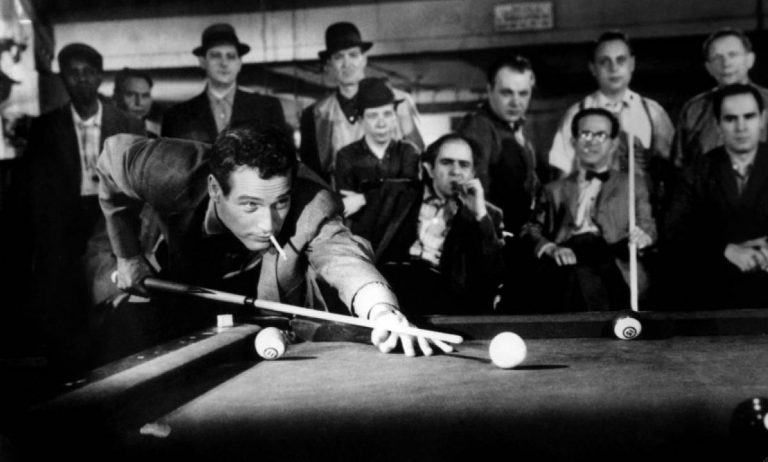 Maybe I’m not such a high-class piece of property right now. And a 25% slice of something big is better than a 100% slice of nothing.

The Hustler isn’t a clean movie. It isn’t necessarily a fun movie. Its characters aren’t heroes. But there’s a grimy serving of hard-nosed humanity at the film’s core, which makes it absolutely enthralling.

This challenge comes with a foreboding warning, however. Fast Eddie is told he lacks the character to win, that he’s nothing but a “big loser” who will wind up on the wrong side of the table, and after more than 24 hours straight of pool, Eddie proves the naysayers right. Minnesota Fats wins.

What follows is the unraveling of a man, the peeling away at the many layers he wears as Fast Eddie abandons his partner, develops a relationship with an alcoholic writer named Sarah (Piper Laurie), and succumbs to the tempting offer of big-time gambler Bert (George C. Scott). The prospect of the big victory is ever present, but the stakes are higher than any sum of money. In order for Fast Eddie to win, he’ll have to confront himself, his ethics, his desires, and the cold, unforgiving reality of the world in which he plays. Every last ounce of his humanity is at stake, and it’ll take nothing short of death before our protagonist sees his world for what it is — a rat race to the bottom.

What makes The Hustler unique is that it’s a tale about a man being confronted with reality. His dreams and his fantasies are slowly chiseled away. The veil is dropped from these pursuits, and behind the temptations, we see visions of demons leading Fast Eddie on, keeping him enslaved to this grand vision of the big win and easy money — one that will never manifest unless he’s willing to sacrifice his soul. This runs counter to the typical Hollywood narrative, one where courageous heroes rise up to live the life of their dreams after overcoming insurmountably huge opposition. In The Hustler, however, divinity is achieved by recognizing the evils around us.

A couple of loving characters, Sarah and Charlie, clash with Eddie along the way. They fight for him. They grab hold of him and try to shake him free of his delusions, but there are others out there, big fish like Bert, who hook Eddie and reel him in. The comparison of angels versus demons doesn’t stray far from the core premise of this movie, but in The Hustler’s world, the angels are wounded players who can finally see the filth around them. They’ve run their fingers along the edge of the pool table and seen the grime that clings to their fingertips. Even Minnesota Fats shows moments of actualization, though he appears resigned to his place as a servant in the court of grandiose temptation.
The best way to describe The Hustler, ultimately, is as melodramatic film noir.

It’s a dark movie with dark themes and undertones that flow counter to the Hollywood norm. The locations are run down, much like the characters who inhabit them, and troubled eyes, especially Minnesota Fats’, go a long way in creating a heavy atmosphere. There’s something heart wrenching at its core, and it’s a battle of good versus evil that rages entirely within the mind of a stubborn, complicated, and naïve Paul Newman.