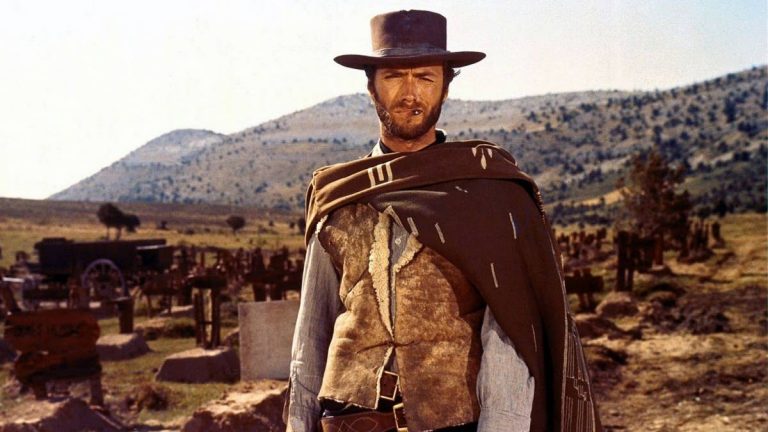 250 films, 250 reviews. This is a pretty crazy idea, but who doesn’t love a challenge? Here at Cultured Vultures we’ll be counting down the IMDb Top 250 with a review for each from one of our dedicated film writers. Everything from Goodfellas to Casablanca will be covered over the next year or so for you film lovers to enjoy. So you can’t say we don’t spoil you, you lovely lot. – Ashley, Project Lead

By the time Clint Eastwood appeared in Sergio Leone’s iconic western A Fistful of Dollars, he had already been working steadily in film and television for a number of years. Even so, his role as The Stranger feels as though this was the first time he had ever appeared in anything. Although the movie would not be released in the United States until 1967, many people credit this as the film that truly launched Eastwood’s film career. It’s hard to argue with that opinion.

For all of the incredible components that make up this movie, Eastwood stands as the centerpiece. To play this character is essentially to step into the shoes of Toshiro Mifune’s performance in Yojimbo, which A Fistful of Dollars essentially remakes. Imagining anyone else beyond Eastwood succeeding in that endeavor is impossible. The passage of time, as well as an understanding of Eastwood’s remarkable acting career, helps us to think along these terms. At the same time, I would like to imagine that people who saw A Fistful of Dollars when it was a new release felt the same way as the people who watch it for the first time in the present.

There was something about the mere presence of Clint Eastwood that could be captivating. He speaks infrequently during A Fistful of Dollars, but everything he says and does makes an impact. Everything contributes to what many people consider to be the definitive Eastwood persona, even above that of Harry Callahan. For some, Eastwood as The Stranger is as significant to the western genre as a whole as John Wayne as Rooster Cogburn.

As great as Eastwood is, he is hardly the only stellar element to this film. The best films of Sergio Leone are not simply great examples of westerns, spaghetti westerns, crime films, or whatever you like. The best films of Leone’s directorial career are quite simply breathtaking examples of singular creativity and inimitable energy. As a straightforward action piece that offers vast quantities of style, without really demanding much more beyond the request that you strap in and enjoy the ride, A Fistful of Dollars is quite frankly flawless. From the moment The Stranger arrives in a town that has been torn to shreds by two warring crime family factions, to the legendary showdown that leaves you in absolute awe of how a movie can culminate with an immensely satisfying conclusion, A Fistful of Dollars never really lets up.

There are some mildly silly moments that surface here and there, but those are overwhelmed by watching a definitive movie badass effortlessly, brilliantly play the two warring factions against other. Anything about the film that strikes you as dated is easy to ignore, in the face of Leone’s talent for building tension, rolling out a wide variety of cinematic tricks to establish his peerless style, and letting the music of Ennio Morricone add a few moments of flair all on its own. It’s not hard to understand why the movie continues to find an appreciative audience.

Call it a rip-off of Yojimbo all you want. Leone, as well as the long list of screenwriters who contributed one thing or another to the script, makes this film his own. Eastwood is essential to that thought, as well. Even if you don’t care about any of that, even if you’re not a particularly big fan of westerns, if you simply want a movie that defines cool, A Fistful of Dollars should accommodate you nicely. If you want to start with a heavyweight for any “best-of” for Sergio Leone, start here. It’s a classic that retains the vibrancy of the moment it was finished.