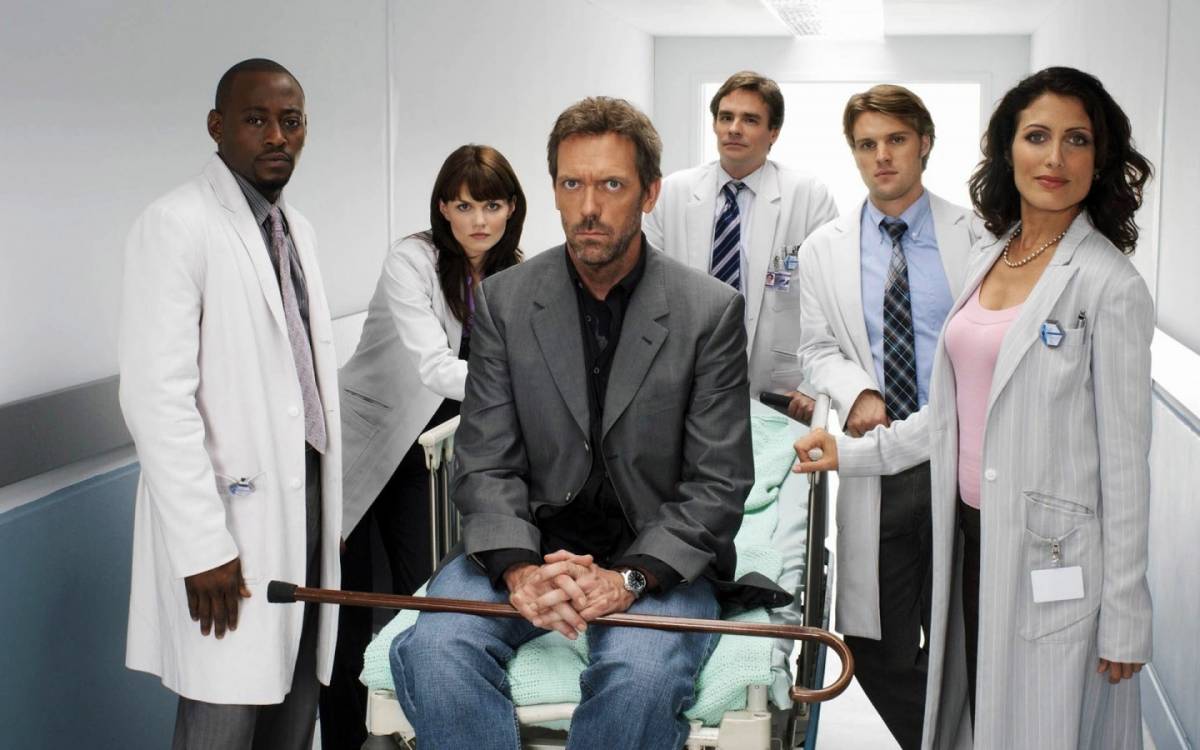 In light of the recent landing on Hollywood Boulevard of Hugh Laurie’s marbley star, I thought I’d take a look back at his most famed success, House. The joy of Sky boxsets and Netflix these days means that TV greatness is forever just a click away, and with House ending back in 2012, it could be easy to dismiss it and instead try something current.

I missed the train the first time round, and if I did, that means plenty of you did too. Many times in the past couple of years I had scrolled through the series that were available, looking for my next fix, and I had often just skipped House, remembering this one time when I had clicked on it to be presented with a daunting 8 seasons, each with a varying amount of episodes, from 16 to 24. It didn’t occur to me that quantity may have equalled quality!

The urgings of a friend kept prodding me, so this, coupled with the fact that I was looking for something with a strong central character to fill the Walter White and Nucky Thompson voids in my life, made me try the pilot. Let me be that friend to you… House is perfect boxset fodder, after all, you’ll have the benefit of no agonising waits between seasons, and they’re just the right length to watch a couple of episodes a night.

To recap: House is a medical drama – but not your average medical drama. I’m not a medical drama fan – at all – also partly the reason I steered clear for so long. Even when the medicine is thrust to the forefront of the episodes, it’s the characters that carry the settings and themes. Medical mysteries come and go, but the central spine of these characters’ stories slowly and gently evolve, giving you something to get your teeth into.

“Do I get bonus points if I act like I care?”

Dr Gregory House is a larger-than-life character, played brilliantly by Hugh Laurie. It’s hard to imagine another actor in this role; a character of sarcastic wit, intelligence, genius and faults. It’s interesting that a British actor won the part, allowing Hugh to inject some of his innate comedy and humanity into the character, a character that can seem almost English in his mannerisms and sarcastic nature, to play the stereotype card.

I could fill an article with House quotes, but I’ll stick to a couple that show two sides of his character. “For a moment there, I thought you were smart.” Let’s get this straight, House can be a dick, a real dick. As much as he cares about the people he allows into his life, he doesn’t sugar-coat anything for them. One mantra that runs through the entire show is that “Everybody lies,” and while House does lie, often for a prank, or to hide his vicodin addiction, you can usually rely on him to shoot straight for the heart. He is unforgiving when it comes to the frailties of his friends and co-workers, which makes for compulsive viewing.

“The eyes can mislead, the smile can lie, but the shoes always tell the truth.” House’s job is to solve medical mysteries, often to save the life of someone who is deteriorating rapidly. Life and death make for good television, but so does mystery, and House loves mystery. He is Sherlock Holmes, living for the high of solving the puzzle; looking to vicodin for that high if he doesn’t have a problem to solve.

Every Holmes needs a Watson. House’s foil, and best friend, is Dr James Wilson, played by Robert Sean Leonard. Through the ups and downs, Wilson is there to act as House’s crutch, should his crutch go missing. It’s a testament to Leonard’s sympathetic acting, and the writing of course, that Wilson grows to become such an important character. Without Wilson, there is no House. He’s a character that sneaks up on you as the seasons progress, alternately feeling sorry for him, sorry with him, laughing with him, and despairing with him.

Their friendship is right up there as one of the great television pairings. There are times you shake your head at the screen, just knowing that House has gone too far this time, and that Wilson won’t forgive him. And he would be completely in his own right not to! House really is a dick sometimes, it can’t be said enough! But the development of their relationship, through the ups and downs, shows how important it is to have someone in your life that you know, no matter what, will always be there. House may push every button Wilson has, but he does so knowing that Wilson understands that he’s ultimately just testing their friendship – or is simply bored and it shouldn’t be taken seriously.

A doctrine of Doctors

Foremost are Eric Foreman (Omar Epps), Robert Chase (Jesse Spencer), and Allison Cameron (Jennifer Morrison), with Lisa Cuddy (Lisa Edelstein) as his boss. House uses his team for deductive reasoning; they come up with solutions and he knocks them down. Through removing all other possibilities, he often finds the one answer that eluded them right up ’til the final moment. Each character is distinct enough, and engaging enough, to reflect different aspects of House’s character. Ergo; he can use them as he sees fit, to get to the answer he wants. Through this manipulation we get to see how they react and evolve throughout the seasons, just enough to be convincing, and enough that they don’t become tired characters.

There’s also a playful, knowing, element to their characters, often joked about by House, as though they know they’re in a TV show: references to Foreman’s apparent lack of emotion; Chase’s Aussie roots, his hair and his looks; Allison’s desire for House (never quite believable, for me). And with that, the running auto-immunity and lupus jokes: with patients rapidly deteriorating in every episode without an apparent cause, the full gamut of auto-immunity possibilities are consistently rolled out.

“If someone says Autoimmune, you’re fired!”

Another example of an in-joke includes one student needing just one more lumbar puncture (“LP!”) to complete her assessment, but she just can’t get one. This follows previous episodes with so many LPs you could make a pretty decent drinking contest out of!

“I don’t like being alone. At least, I convince myself that I’m better off that way.”

House doesn’t shy from the depths of some important issues. Addiction, and the effects it can have on both the individual, and those who love him (or her), are fully explored. The lengths someone will go to to hide an addiction, even in their darkest and lowest moments, at risk of death, are dealt with realistically, and in one memorable moment, horrifically. (Fans will know which particular moment I’m talking about).

And death and pain are a constant theme – dealing with the loss of loved ones, of senseless loss, or physical and emotional pain. Depression too. You get the sense that House is too preoccupied by his puzzles to be depressed – and maybe that’s the point – but lonely he certainly sometimes is. The show delves into the psyche of someone with, possibly, borderline mild aspergers; someone who simultaneously shuns those closest to him with insults and purposeful hiding, while knowing he needs them around to survive.

Over 8 seasons, few series have so convincingly conveyed a single character. By the end, House feels real. And if you’re one of those who worries that the ending to a series will be a cop-out, there’s no need to worry at all. The finale is satisfying and introspective, without giving anything else away. House is a show for those who appreciate characters and their arcs, as they are forefront of the writers’ considerations; given enough time to develop and mature, along with the actors that play them.