Try not to get nuked, eh? 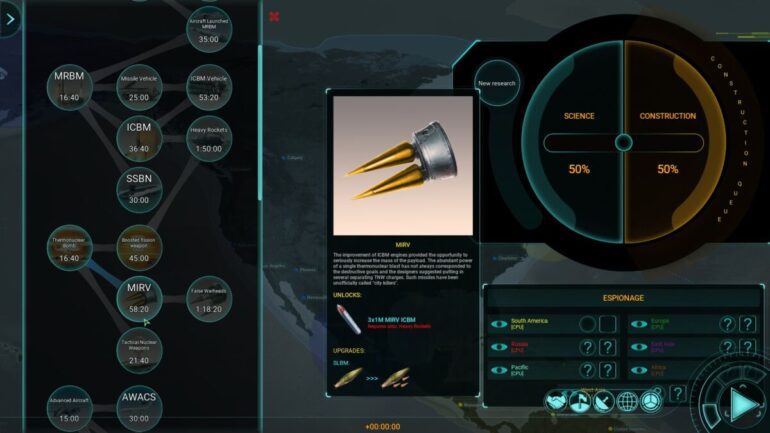 ICBM is a compact game with a simple premise and easy-to-understand mechanics, but with plenty of strategic possibilities. The objective of the game is to vaporize opposing regions before they do the same to you. This handy ICBM guide to armageddon will primarily focus on strategy and tactics for the single player mode; however, a number of the following suggestions can certainly be adapted and developed for multiplayer.

Players will have the entire globe as their nuclear playground, but they will take command of one region. Each region has its own population and city layout, as well as geographic features that are vital to composing a defensive and offensive strategy. To best utilize the terrain, it is highly recommended for players to get familiar where their largest and most important cities are and potential attack paths from other regions.

Be Efficient with Research and Synergize Technology Paths

Research will be one of the defining elements in driving the player’s strategy to victory. Time is also limited before nuclear war starts and it’s highly unlikely you can research the entire tech tree. Because of this, choosing only the most necessary techs, as well as those that improve or are connected to previously unlocked ones will ensure a more efficient use of time and resources.

However, It is important to be careful not to overspecialize on certain techs, even though they may directly benefit player assets. For example, the Anti-Ballistic Missile tech (ABM) unlocks the ability for SAM sites and destroyers (DDs) to shoot down incoming missiles. There is also an Advanced ABM tech, which improves defences further, but there could be a way of gaining the same protective effect by simply building more SAM sites and allocating research to something else.

Diplomacy is straightforward and simple in ICBM and can provide some important benefits if the allied regions agree to them, such as sharing radar intelligence and research progress. Extra global situational awareness is always good, since strikes can come from virtually any angle, but the research sharing can give access to possibilities a player normally wouldn’t have if they were to play without alliances. Be wary, however: alliances are non-binding and they can be broken at any time for any reason.

The AI works like clockwork in single player where they follow a predictable behavior of starting nuclear war, if not provoked by the player, at around the in-game 3 hour mark (they can start as early as 2 hours and 30 minutes). Additionally, at the start of ICBM matches nuclear weapon production starts at 10% efficiency and slowly increases to 100 by the 2 hour mark. Use these benchmarks to guide how much time is needed for preparation and then plan execution.

Players can affect how they allocate resources to prioritize speeding up either research or production, with larger projects (10 minutes or more) benefitting the most from increased resource commitment. Consider shifting the slider to a 55-45 or 60-40 setting for large projects, as going beyond these margins will yield significant diminishing returns and will actually hamper player progress. Going beyond these margins in favor of production once nuclear war starts is fine as there will likely be little time for research anyway.

ICBM is a game not only of wiping enemies from the face of the earth, but also protecting your own cities. In the Default victory mode, players will gain points for eliminating enemy populations, but also lose points if they get hit themselves. Hence, it is vital for any player strategy to ensure that they have a major defensive option and a primary strike capability. In essence, ensure you can walk and chew gum at the same time.

Speaking of defence, the most common threats players will have to contend with are aircraft (mostly bombers) and ballistic missiles (both tactical nukes and strategic city-busters). Due to the number of opposing regions, the likelihood of having to face off against both aircraft and missiles is high, which should factor into any defence strategy. There is no best solution for every single threat and likely a player’s defensive component of strategy can combine both passive and proactive elements to optimize regional protection.

All the major nuclear weapon systems can be roughly classified into two categories: tactical and strategic. Tactical nukes are meant to take out enemy assets such as structures, ships, and defenses, whereas strategic nukes (any weapon with a megaton or greater yield) are meant for hitting cities and dealing population damage.

Things like cruiser-launched or missile vehicle short-range ballistic missiles (SRBMs) or air-launched ballistic missiles (ALBMs) would be classified as tactical nukes, whereas intercontinental ballistic missiles (ICBMs) have enough power to efficiently cause city damage. The strategic challenge for players is to use both categories in a complimentary manner where the tactical weapons eliminate threats and defenses to allow smooth delivery of strategic weapons to gain victory points.

Since ICBM is primarily a game of strategic warfare, intelligence and awareness are vital components for planning and acting. Almost every asset has some sort of radar, with certain units, like the AWACS, or structures, like the radar site, provide massive radar coverage, which act as your eyes and ears. It is crucial to constantly place and move structures and units in such a way that you are aware of anything and everything that will allow you to strike better and prepare for incoming attacks. Researching radar improvements early can be a huge boon in this endeavor.

When populations start getting hit, they will start lowering the production output of the associated region. When output drops, research and asset production will suffer and there is no way of recovering from any population damage. Hence, it’s very possible to take an early aggressive approach to chip away at an opponent’s population to slow down their production over time, or instead focus on an alpha strike that wipes out an entire region’s production capability. Both approaches have their advantages and disadvantages, but are certainly viable with the right preparation.

The Strike Planner is an incredibly handy tool in ICBM, which gives players the option to group unit behaviors based on unit type, prioritize various targets, and commit to synchronized attacks for maximum effect. This tool is invaluable, especially in later stages of a match when regions have built large arsenals and forces, allowing for easy command of all troops across the globe.

As soon as any player in the game opts to use even the smallest nuclear warhead, the AI will perceive it as an act of war and will immediately retaliate. The use of nukes will not affect the target players are attacking, but the entire globe will begin nuclear war operations. Because of this, players have to be careful and absolutely ready to defend immediately as soon as nukes are used.

Since resources are limited and the world is large, it is almost impossible to nuke the entire world solo. Alliances are needed for even greater effect and reach. Regardless of the state of diplomacy, it is a good idea to focus an attack on one or two regions to concentrate overwhelming force and also to simplify control over units.

Aircraft are common in ICBM as they are mobile and can strike far and fast. Aerial engagements will happen between regions and they will be fast and brutal. The player with a tech advantage in aircraft, specifically the level of aircraft (base, advanced, or stealth), will very likely gain air superiority and, as a result, have the ability to strike with bombers and other assets at will.

The Navy is King in Early Offence and Defence

Naval units are some of the most versatile forces in the game and are extremely potent at force projection, especially in the early game. Ships like destroyers and cruisers (DDs and CGs respectively) have flexible and powerful weapon systems capable of hitting different unit types, and are themselves quite durable. This allows them to be used in a defensive posture, acting as radars and air defence, or immediately be turned into offensive weapons and bully enemy coastlines taking out installations. The only significant weakness is their relatively slow speed, but they more than make up for it with their power. 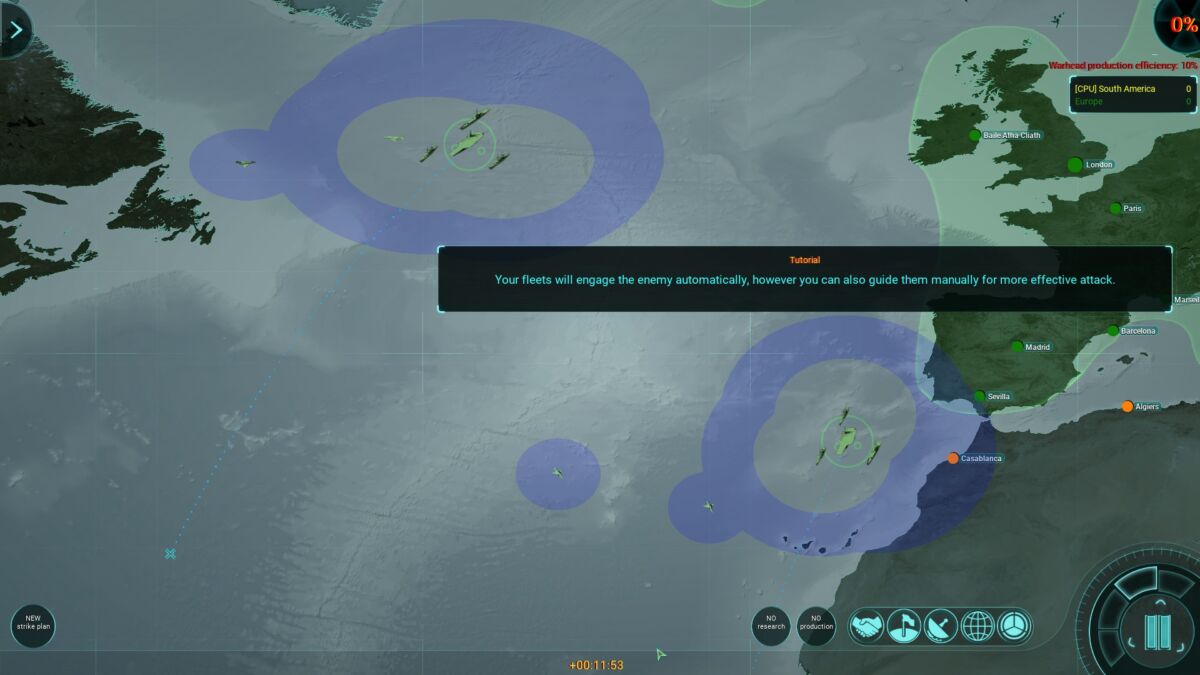 Keep Carriers Safe With an Escort

Carriers are an important asset as they can transport and base airwings capable of hitting deep into enemy territory where stationary air bases might not be able to reach. The aircraft of a carrier can be used both in defense, taking out air strikes before they reach any vital targets, or in the offence, wiping out installations and ships with ease. However, carriers themselves have no defences and are extremely vulnerable to attack from submarines or ships and airplanes when their airwing is depleted. It is wise to keep an escort of at least two or three if not more DDs (and 1 CG for good measure) to protect the carrier when it is in a weakened state.

Use the Oceans to Hide SSBNs

Ballistic missile submarines (SSBNs) are some of the most efficient and dangerous units due to their relatively large loadout of upgradeable medium-yield nuclear missiles. Also, SSBNs hide under the waves and only units with sonar can detect them, such as Destroyers, other submarines, or carrier-based early-warning helicopters, but once they do, SSBNs have little in the way of defences.

The best way to keep them stealthy, aside from researching the appropriate techs, is to utilize the world’s oceans and in particular the Pacific Ocean and the waters around Antarctica. These bodies of water are so massive that it would take a huge amount of ships to systematically comb through them and lock them down to prevent SSBNs from lurking.

Use the Pause Feature

ICBM can get overwhelming when many things happen at once, especially once nuclear war starts. Getting used to the pace and dynamics of the game will take time and the pause feature will only help players ease into the flow of the game. In multiplayer, pausing will be far more limited, so using it to learn the game early will give the necessary skills and reaction to play in full real-time.

READ NEXT: The Most Influential Strategy Games of the 2010s