How Thatgamecompany’s Journey Changed My Life 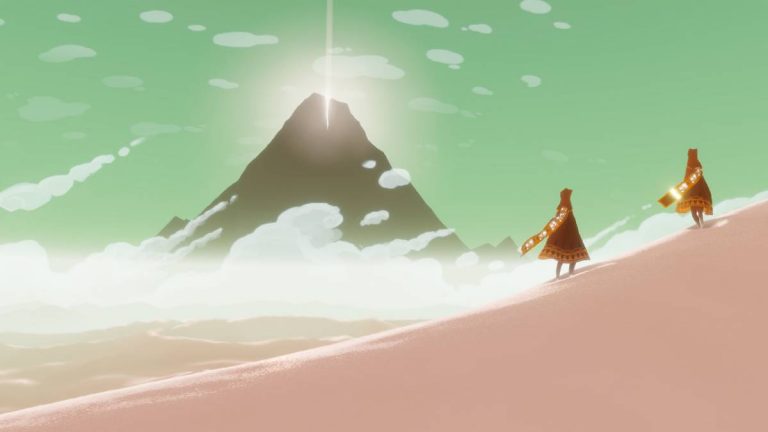 Trying to write this piece has been a journey in of itself. Not because it’s a topic which isn’t interesting to me or that there isn’t enough to cover, it’s just that Journey is a game which almost transcends words on a page – it’s an experience.

Journey is a game which consists of so much beauty. The soundtrack is hopeful at one second, then brooding the next without once being unfitting for the scene it belongs to. Conversely, the graphics are pure art – many games attempt to create their own style without ever really standing out, but Journey‘s is one of its biggest accomplishments.

Having initially played the game on the PlayStation 3, I was delighted to have the opportunity to travel the desert again on PS4 about a year ago. I didn’t think it was possible, but Thatgamecompany had somehow made each grain of sand, every swish of scarf and the charming singing of your avatar as captivating as the first time round, if not more. Journey is a game which has resonated with me more than almost any other piece of media I have encountered.

The plot, although vague, centres around your robed character’s pilgrimage to the top of a mountain. That’s it. There are no distracting side-quests or wasteful filler; just you and the expanses of a desert that will leave you feeling very small indeed.

The feeling of isolation is one that I think we all need to have every so often. With all our technology and social networks, people are too afraid to be alone with their own thoughts for even a second. I am guilty of that myself – I often feel lost without a controller or mobile phone in my hand, too regularly dependent on internet trivia to help me make idle conversation. Although Journey is still technically a form of entertainment, the case could be made that it’s a form of virtual therapy instead.

Prior to picking up the controller for my latest foray into the sandy expanses of nothingness, I was in a bad shape. I had sunk into something of a depression, unable to go to work for a couple of weeks because I couldn’t bear the thought of the stress it brought, or being around other people in that situation. Shortly into my playthrough of Journey, I felt strangely uplifted as if it was calming my mind and helping me to think clearly.

The sensation was almost indescribable: I was disconnected from the real world and the worries it brought with it. Rent became a non-issue, the empty fridge stopped making my stomach rumble and the damp coating the walls of my dank, distressing home no longer made me fret. The intense feelings of loneliness evaporated away as I travelled with a nameless, voiceless fellow gamer, forging an unspoken bond with them that I have never experienced in a video game before.

Although short on playtime, Journey stands head and shoulders above most competitors because of what you take away from it. All of the first-person shooters in the world can’t match this for pure immersion and memories savoured after the credits rolled. Thatgamecompany have succeed in creating a world that is always inviting, no matter how many times you reach its zenith.

The conclusion is epiphanic in a strange way that is almost too difficult to transcribe. Despite never knowing my character’s or my fellow wanderer’s name, or even having a conversation between us, I felt a great sense of pride and accomplishment for having reached its end; my spirits soared and a warmness rose up from my belly. It was the happiest I had felt in a long time, like a therapist had come along and waved their magic wand.

The clarity brought on by Journey made me realise what I had to do: I decided to quit my job to chase a dream that I had been trying to accomplish for two years. Two hours spent with it had been more therapeutic than two hours with a licensed professional ever could.