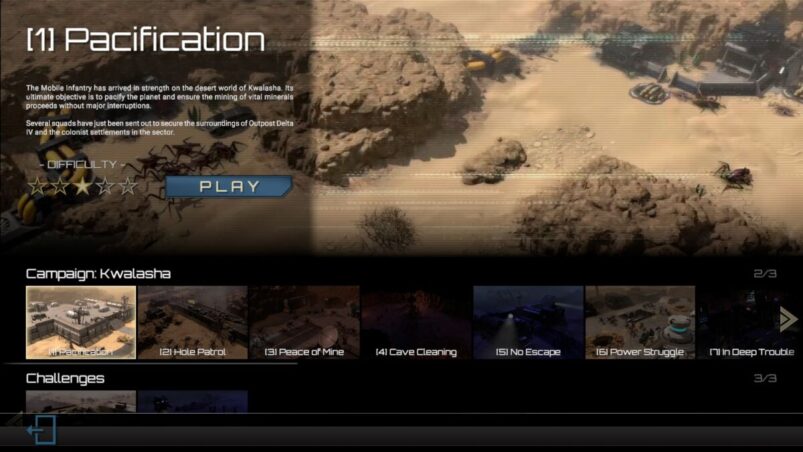 Terran Command’s single-player content is split into three main sections, the first of which is the tutorial. There’s a single mission here that sees you take command of a small force of Mobile Infantry in the disastrous invasion of Klendathu in Operation Bug House. The mission will teach the basics of movement and abilities, as well as accepting defeat, and should take you no more than 5-10 minutes to complete.

The bulk of Starship Troopers’ content is the main campaign composed of 20 missions and scenarios. There’s an impressive mix and variety of mission types including small-scale linear missions with limited resources all the way to massive dynamic missions with defensive and offensive operations in equal measure.

The first couple of missions in the campaign are relatively short and can be completed within 10-20 minutes. Later missions, especially the large ones, can often run 30-60 minutes. The difficulty level can also have a notable impact on the time needed to complete a mission, as well as the strategic approach you take. You can also expect that restarting a mission or loading to a previous save will add to a mission’s run time. Altogether, the campaign should take roughly 15-20 hours to complete in full.

There are two challenge scenarios available: Starport Sweep and Knights in Powered Armor. The former is the larger and more expansive of the two and could take 30-90 minutes to complete depending on your strategy and which objectives you decide to go for. The latter scenario is more mobile and dynamic, but no less complicated and should take about 30-60 minutes to wrap up.

Starship Troopers: Terran Command certainly has plenty of content to offer fans of the franchise and real-time tactics games in general. Your speed and mileage will be heavily reliant on the difficulty and tactics you choose due to the overall open nature and large scale of some of the missions. Bug hunting can’t wait though so get in your dropship and get a move on.