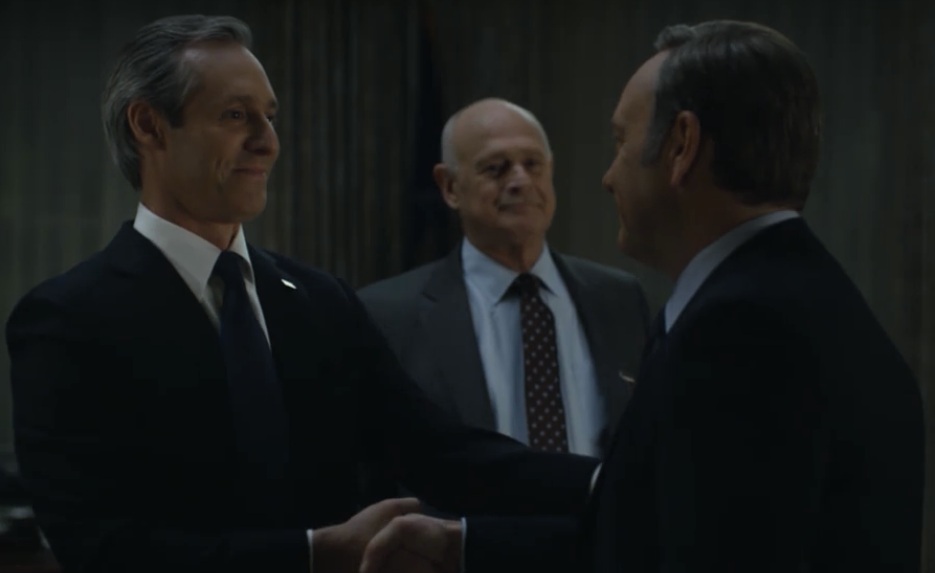 The power-thirsty Frank is likely to cause the President a lot of grief in Season 2.

Ashley Bebbington predicts some of the major plotlines coming up in the Mega-Hit house of cards.

House of Cards is set to return on Valentine’s Day this year, with all 13 episodes to be uploaded to Netflix simultaneously. After the first season’s dramatic conclusion, which saw Congressman Frank Underwood’s (Kevin Spacey) appointment to the Vice Presidency, it’s surely an early contender for TV event of the year. Here are 4 things to look out for in the new season:

Raymond Tusk, brought into the first season very late in the day, is a wealthy industrialist who made his money through nuclear power. He’s a close friend of the President, and played no small part in Frank’s appointment to the Vice Presidency. Whilst Frank asserted that he would rather not take the job than be Tusk’s lapdog, he owes some amount of loyalty to the man, who expects him to support pro-nuclear policies. This directly conflicts with the wishes of Remy Danton, a lobbyist for a natural gas company that have previously donated campaign funds to Frank’s re-election efforts. Clearly, these two business interests are going to conflict at some point, and both parties involved would make a powerful enemy for Frank were he required to go toe-to-toe with either of them.

Considering the ruthless cunning Underwood displayed to get the Vice President’s office, it’s not unfair to assume that he’s far from done. Last season White House Chief of Staff Linda Vasquez (Sakina Jaffrey) speculated that Frank would serve the rest of the term as Vice President before using that as a launch pad to secure the Presidential nomination. It’s pretty much certain that, given what we’ve seen of Frank so far, he won’t rest on his laurels. The logical next step would be to angle for the presidency before the next election, but how? He’s already shown that taking a human life isn’t beyond him with the carefully orchestrated murder of Peter Russo, carried out to look like suicide. Murdering a rookie Congressman, and murdering the President of the United States, however, are two completely different things. Whatever the case may be, we’ll surely be seeing more of Frank’s scheming in the next season.

3. The Changing Relationship between Frank and Zoe

For the majority of the first season, Frank Underwood was busy getting in the pants of young journalist Zoe Barnes (Kate Mara) in exchange for insider information from the Capitol. In the latter stages of the season, however, the relationship between the pair became more and more strained, adopting a purely ‘professional’ working relationship without the perks. In the finale we saw Zoe and her colleagues coming dangerously close to discovering Frank’s plot to discredit – and later murder – Peter Russo (Corey Stoll) as part of a wider scheme to take the Vice Presidency. Clearly Frank and Zoe both need one another, but if she should discover the true nature of his deceit, he may have a hard time keeping her quiet; with his new-found power, the stakes are higher than ever.

4. Frank’s relationship with the President

Frank’s predecessor, Jim Matthews (Dan Ziskie), was essentially a glorified mascot; ushered from one photo opportunity to the next, he had grown deeply disillusioned with the lack of power he wielded. As history has shown, however, the Vice Presidency is whatever the individual makes of it in terms of the power afforded to them. It’s incredibly unlikely that the power-thirsty Frank Underwood will simply take a back seat to all of the White House’s goings-on. This is likely to cause friction between him and the President (Michael Gill); while Frank was in Congress, the President could easily keep him at arm’s length, but now he’ll be offered no such luxury.

Check out the trailer for season 2 below: