It's about time you figured out if you like hurting people with the Hotline Miami Collection on Switch. 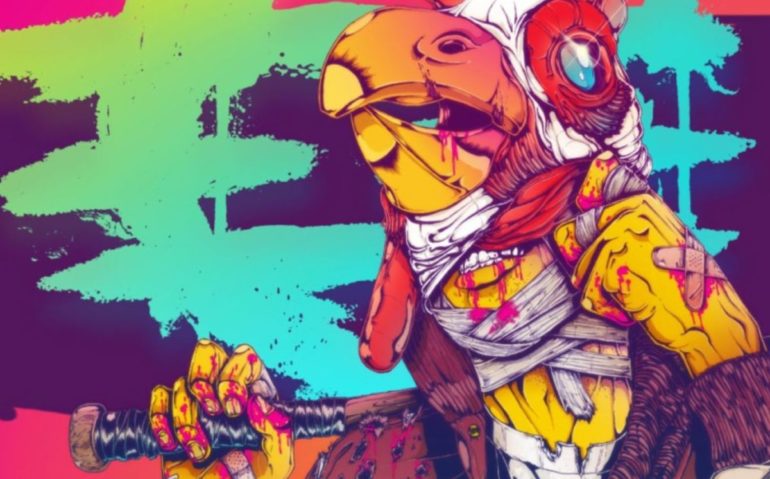 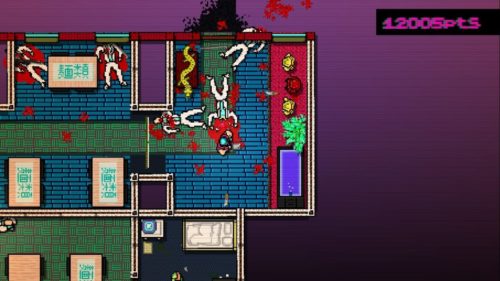 Few games have been as influential this decade as Hotline Miami. Dennaton’s neon-infused vigilante simulator has inspired many top-down imitators over the years (Mr Shifty and Ruiner to name but two), and it’s also largely responsible for the surge in popularity of synthwave: the 80s throwback beats that anchor the mayhem. It’s been the perfect fit for the Switch since the console launched, and now it’s finally here in the form of the Hotline Miami Collection.

Both Hotline Miami and Hotline Miami 2: Wrong Number are a part of the package, though it’s a shame someone at Devolver didn’t sneak in Hotline Milwaukee. This same collection has been found on other platforms before, including the also portable Vita, and there’s nothing new for its Switch version — at least from what I could tell. That doesn’t make this any less of an essential purchase, though — even if you’ve descended into madness with both entries before, Hotline Miami hasn’t missed a step in the time since. 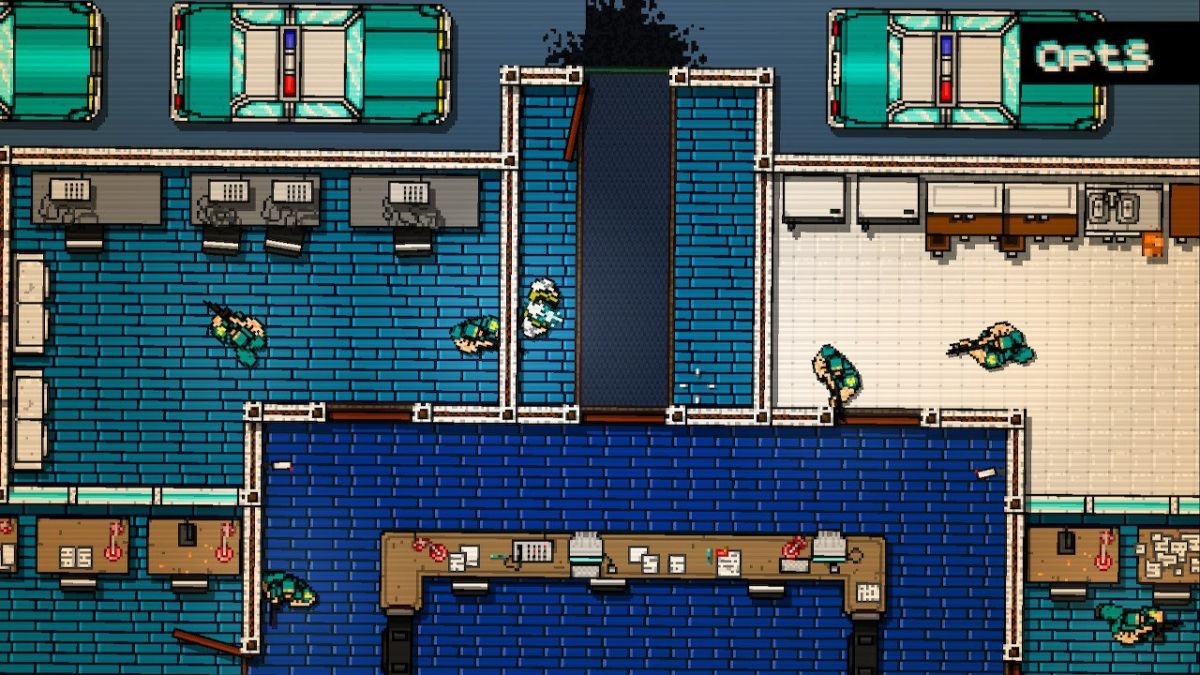 The first game is a laser-focused and enthralling experience, minus the infamous stealth level that is probably the worst thing about it. You play as Jacket, a disillusioned man who kills the mob at the behest of a strange voice on the phone. The story doesn’t go much deeper than that, though thematically it has the depth of a Lynchian lake if you read between the lines and dig a little deeper. It’s more than just an excuse to kill people while wearing funny masks.

Said masks are rewarded for completing levels and each comes with a different perk, minus the default, Richard. One mask will make dogs docile around you while another will start you off with a knife. Not all Hotline Miami masks are created equal, but there’s enough here to satiate those who want some variety in playstyle; those wanting to better their scores will doubtlessly appreciate the option to experiment. 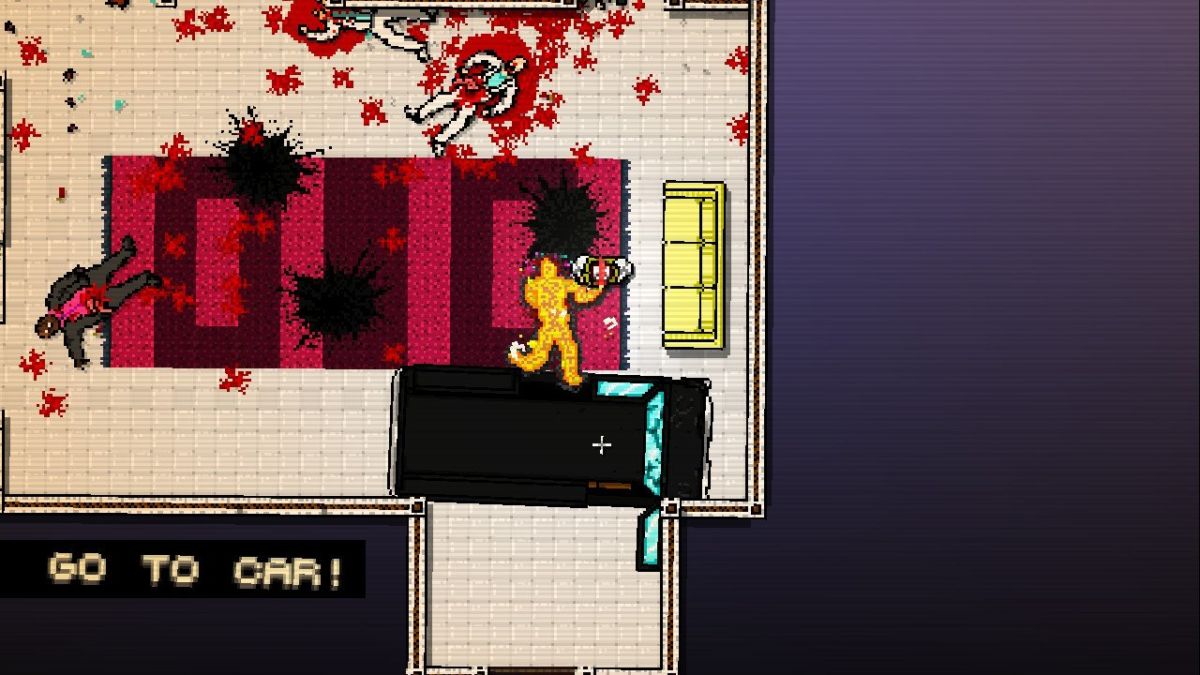 The goal of each level is simple: kill ’em all. Most levels require you to go through multiple stages for completion with generous checkpointing at the start of each new stage. It’s hard to define exactly what kind of genre Hotline Miami belongs to, because while it looks like a simple top-down shooter, it’s actually more of a rhythm puzzler. You follow enemy patterns and their placements, knowing that doing X will cause Enemy Y to do Z. Knowing who does what is part of one large puzzle, you being rewarded for really taking the time to dig into the “rhythms” of a level with silky, frenetic gameplay that makes you feel like you just came from the set of a John Woo movie.

Hotline Miami may not initially look like much, but it possesses the same rock-hard hook of the early 90s games it’s aesthetically inspired by. Those who can’t accept failure need not apply — it’s part of the Hotline Miami experience. Each death comes quickly with it likely being your own fault, a single misjudgement in positioning getting you swiped by a baseball bat or blown away by a shotgun blast. The frustration of Hotline Miami’s one-hit kill (for both you and your enemies) is offset by the ability to instantaneously restart, meaning that no matter how violently you are frothing at the mouth after you forgot about a particular enemy for the umpteenth time, you can immediately go again. It’s hard to put Hotline Miami down once you pick it up, it just as compelling to play as the day its Drive-inspired madness first released. 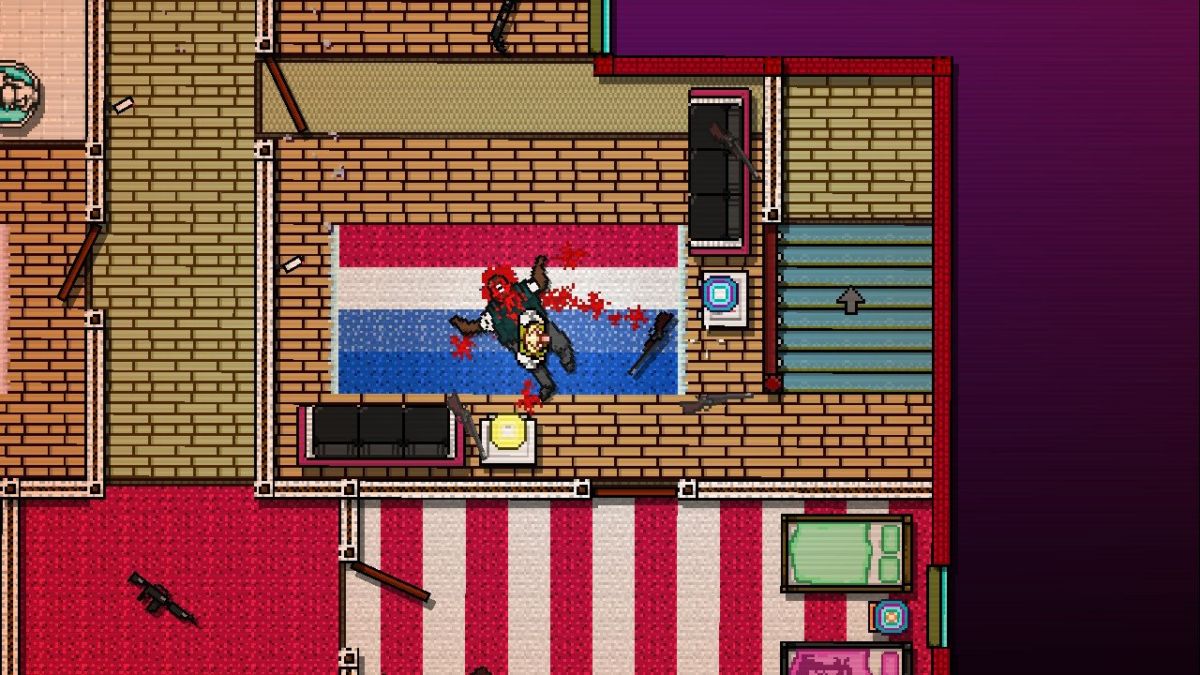 The Switch port doesn’t seem to be perfect, however. Enemies can often somehow latch onto each other and “vibrate” in place, and the lock-on system is worse than I remember, it being far fiddlier than such a simple mechanic should be. The most “interesting” bug I encountered duplicated Jacket at the end of a level with all previously killed enemies also returning, meaning that I had to restart the level all over again or somehow control both Jackets at once, who were on the opposite sides of the level. Definitely one of the most unique glitches I’ve ever encountered, but likely something a quick patch can clear up.

As for its sequel, Wrong Number has the more expansive and, at times, exciting gameplay, but it loses focus with a staggered storyline that flits between characters too often, giving itself barely enough time to settle into a rhythm. Wrong Number is undeniably still a fantastic game, the door-bashing and knife-slashing losing none of its appeal, but in their attempts to give more weight to the story, Dennaton added too much and took away a little of the surgical charm of its predecessor. When you can piece it all together, the narrative is superior (minus a cynically definitive ending to stop all talks of another sequel), it’s just the presentation of said narrative lacks cohesion.

In terms of gameplay, Wrong Number maintains the same “just one more try” pull of its predecessor, though levels are far broader this time out and enemies more numerous. It’s also not as punishing as the original with some masks and characters allowing multiple hits before death, and the lock-on being considerably more generous, it more often than not latching onto the right enemy and a quick tap of the button moving onto the next target. You can’t scope out far ahead like you could in the original game, leading to more unavoidable deaths, which, again, is just a part of the experience.

There are far fewer masks in the sequel, but the ones that are on offer provide the most significant gameplay changes. Alex and Ash allow the player control two different characters with one having a chainsaw and the other using only guns. This takes a little bit of getting used to, but once you nail the drastic change, cutting a swathe through enemies turns into a bit of a care-free exhibition of violence. Another mask (hilariously called Mark) allows players dual-wielding, which is just as fun as you would expect. 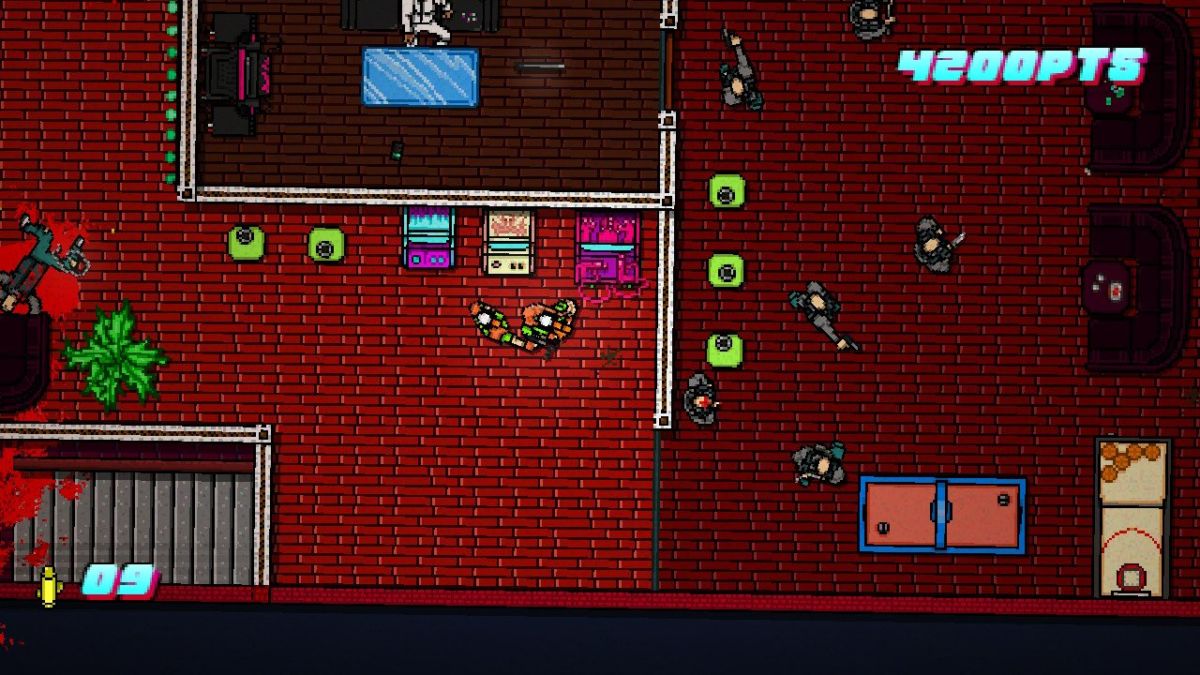 The Switch is renowned for allowing multiple ways to play, whether that be docked or handheld, with a controller or Joy-Cons. I spent the large majority of my time with Hotline Miami in the palm of my hands, though the “nubs” of the Joy-Cons didn’t allow as much precision as a Pro Controller. Playing on a big screen with a controller is the best and easiest way to play, but there’s something irresistible about putting on a pair of headphones, cranking up the synth, and proving that you’re not a nice person. If you’ve played Hotline Miami on the Vita before, you will know that the experience translates remarkably well to handheld.

The Hotline Miami Collection on Switch brings two of the most influential games ever made to yet another platform with great success. Even if you’ve played them many times in the past, there’s something about this Switch port that feels fresh, providing a welcome reminder of just how brilliant both games are in their own distinctive ways. If you’ve never played either, it’s about time you figured out if you like hurting people. 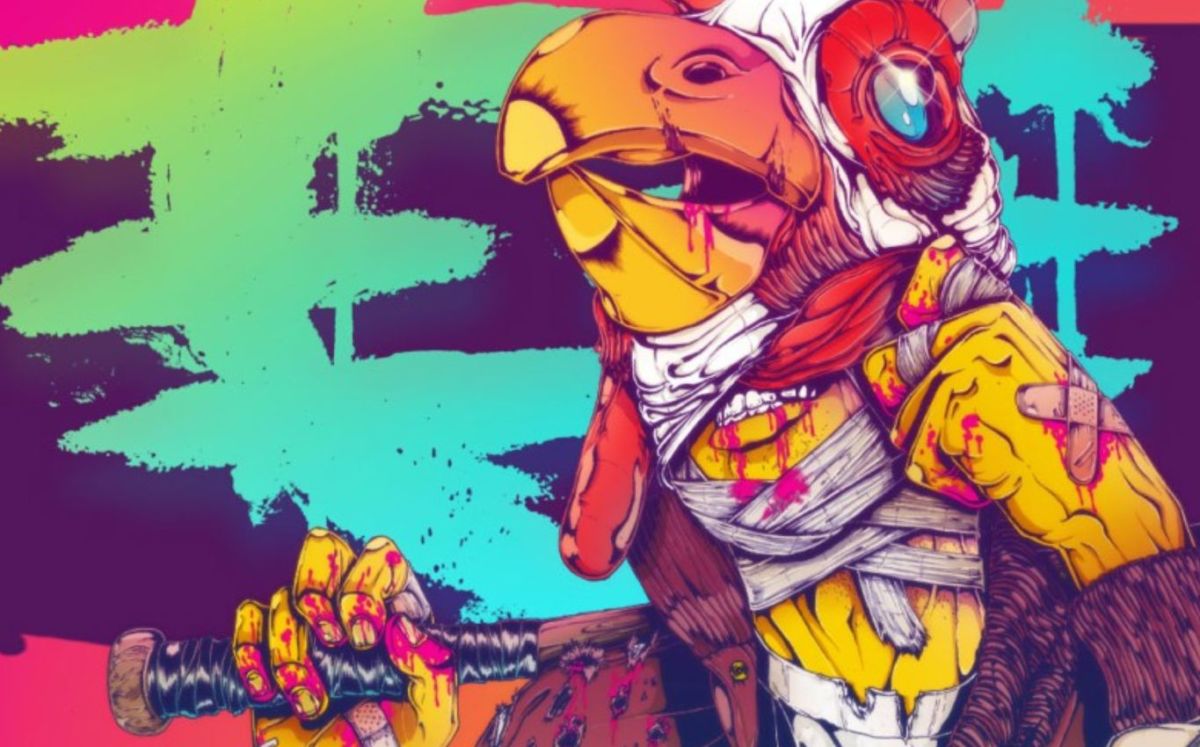