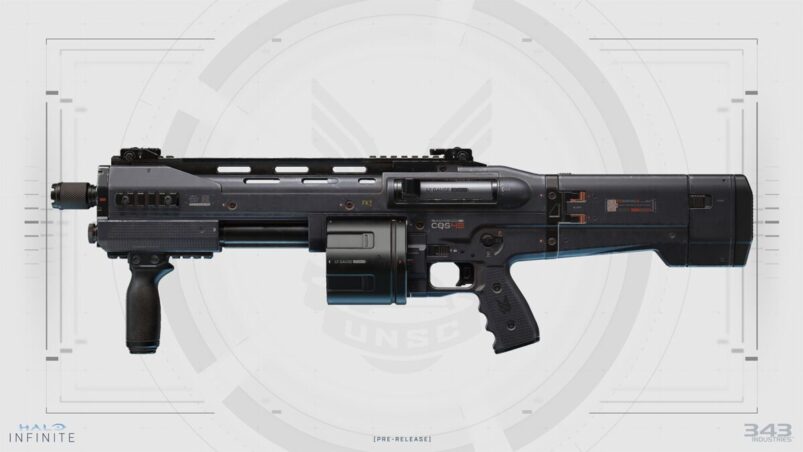 With Halo Infinite’s multiplayer having been out for over two weeks now, people from across the world have had their chance to get their feelings out there on what could be the best multiplayer shooter of 2021. While we’ll still have to wait and see if the campaign is up to snuff, opinions on the multiplayer have been all over the place.

Most tend to agree that the core gameplay of Halo Infinite absolutely slaps, but concerns have been raised about how the cosmetics work, with certain pieces and shaders only viable on certain armour cores and weapons, and the forced cross play in most playlists has seemingly let M&K aiming demons and even cheaters run rampant on unsuspecting controller players. There’s also the battle pass progression controversy, an ongoing issue that 343 have been continually refining.

However, there’s one issue to me that’s more egregious than all the others, one that I’d go as far as to say ruins part of Halo Multiplayer’s core identity entirely: the shotgun fucking sucks. The Heatwave gets a pass from me due to how gimmicky it feels, and the bouncing shots and trajectory swapping have more utility, but the CQS48 Bulldog feels like the biggest downgrade from the Halo games of the past.

Typically, the shotguns in Halo games have been pump action affairs, with the M90 and M45 shotguns absolutely decimating enemy Spartans in close range. It would even one hit kill if you rammed in the enemy’s face and pulled the trigger, which doesn’t sound impressive, but considering you play as super-powered, badass marines in god tier sci-fi armour, it’s a lot of damage. Now, with the Bulldog in Halo Infinite, it feels like you need to be in the same kind of range to even tickle the enemy.

That’s a bit of a hyperbole, as the shotgun in Infinite is still capable of putting a Spartan in the ground in 2-3 shots at close range. The increased rate of fire due to the weapon not being a pump action is also helpful, but when you’re used to the one hit kill potential of Halo’s boomstick that’s been evident in the 20 years prior, the Bulldog doesn’t match up.

Perhaps 343 Industries are trying to promote a more melee focused approach with the shotgun, as you could use the shotgun to weaken an enemy’s shield so you can lay them out in one punch instead of two. Even in that framing though, the Bulldog still feels like a downgrade, as the original shotgun could at least remove the full shield in one shot with the right range if you weren’t close enough to one hit kill.

Still, the biggest crime is the fact that it ruins classic Halo match-ups. The shotgun was incredibly situational anyway, its only real use in conventional gameplay being to hide around corners and one shot unsuspecting dweebs. However, as soon as melee weapons like the Energy Sword and Gravity Hammer came into play, the shotgun came into its element. Those weapons would lunge towards foes to grant an easy one hit, but a shotgun would let the player counter their lunge with a quick kill.

While the Gravity Hammer has been reworked in Infinite for less lunge but wider OHK range, the Energy Sword is still a lunge monster, but thanks to the weakened shotgun, a core tool to defend against the Sword’s domination has been removed. While it takes skill and patience to use the sword effectively, it’s a weapon that even new players could pick up and do some damage with.

To effectively counter it, your maneuverability and equipment usage needs to be on point, which can require a higher skill level in order to survive. On top of that, equipment being a pick-up instead of a loadout item (which I think it should be but that’s another topic), means you can’t always rely on having a Repulsor to put distance between you and the shiny scalpel.

For lack of a better term, a shotgun was an easy low skill option that could counter a relatively easy low skill weapon. Yeah, you could land a no scope headshot with a sniper, but the chances of that are slim. Landing a sticky grenade would down the sword user, sure, but that’s difficult in and of itself sometimes, and the delay in explosion would mean they’d focus you down before they died. If the sword wielder also has the Grappleshot, Halo’s grapple hook equipment, you’re doubly screwed.

There’s nothing more satisfying in Halo than facing down a sword user who’s lunging at you and blasting them away with one pull of the shotgun. Heck, there’s even a medal for it in the form of a Bulltrue, a medal that Infinite still has, but with the nerfed shotgun, you’ll hardly ever get it. About the best you can hope for is a decent shot with a Skewer, or to blow both you and the sword user up with a rocket launcher.

Perhaps this is a bit of a petty opinion to have, given that a large part of Halo Infinite’s gameplay is still amazing, but the weapon balancing definitely has some issues right now. Aside from the Skewer, which is the best weapon ever (don’t @ me), most of the new weapons are weak and lack impact. The Commando feels like a feather duster, the Ravager is the weakest plasma weapon Halo’s ever seen, and the Disruptor manages to be a worse version of Halo 3’s Brute Spiker.

Still, the worst offender by far is the Bulldog, not because it’s a bad new weapon, but because it’s a bad replacement of a core pillar of Halo’s arsenal. The Shotgun played a vital part in Halo’s power weapon meta, countering OP melee weapons while getting destroyed by other ranged weapons. In Halo Infinite, the Bulldog feels lost in the shuffle, and a piece of Halo’s soul goes along with it.

With 343 Industries promising more weapons to be added over the course of the game’s lifecycle, I’d imagine there’s room in the meta for two different kinds of shotgun, with the Bulldog favouring rate of fire while the second could be a genuine power weapon that opts for sheer damage. There’s an argument to be made that the Bulldog in its current form has wider versatility than any Halo shotgun before it, but there’s a vacuum that’s been left behind when there didn’t really need to be one to begin with.

Perhaps you could meet in the middle and add an alt-fire that does more damage while consuming more ammo. Best of both worlds, maybe?

READ MORE: 20 Years On, Halo: Combat Evolved Is Cemented As An All Time Great