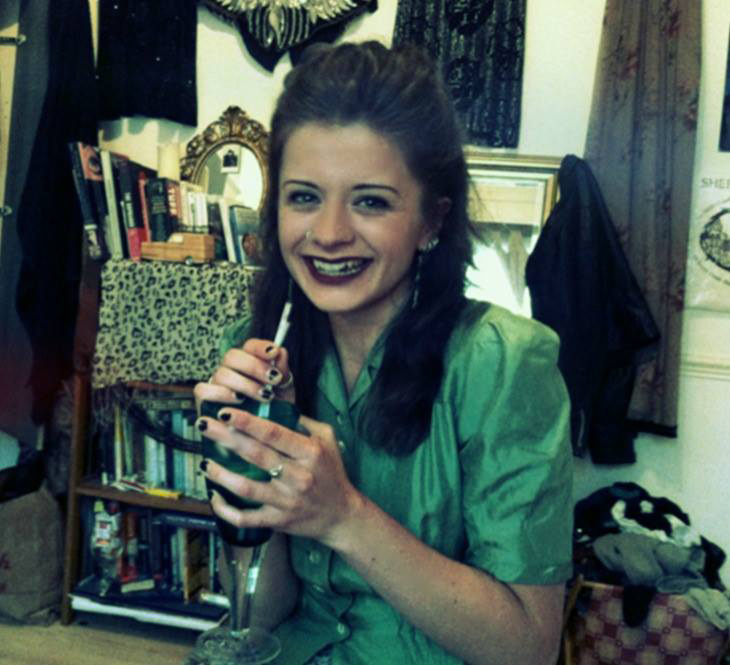 Livvy Hooper concludes her look at the University of Greenwich’s brightest talents; focussing her spotlight on undergraduate poets who featured in the end of year exhibition and reading; these are the ones to watch.

Tell us a bit about yourself
I’m Claudia, I moved to London three years ago from Sheffield, where I was born. I just graduated and now I’m not up to much. Floundering around in the real world. I turned 22 last month.

So tell us about the collection of poetry you created in your final year – what’s it all about?
My collection is called Taking Gennels. ‘Gennel’ is the word we use back home for the alley that runs down the sides of houses, or for any alley really. There are dozens of words for that alley in England, at the start of the book I included a few of the different names that I found online for it, like snickleway and twitchel, jitty and jigger. Brilliant words. Why does a little alleyway of all things get so much attention from the English language? I think that there’s something deeply personal and secretive about those nooks and crannies in a city. When you’ve lived there long enough, you get to know those back streets and shortcuts and alleyways like the back of your hand. It’s like you live behind the scenes of the city, in the clockwork that makes the hands turn. The inner workings as opposed to the outer appearance – that’s always a distinction that fascinated me. Before writing the poems I was experiencing some things that made me become quite closed off in a way. After a while it began to feel like I was trapped inside myself, stuck in the inner workings – lost in the gennels, if you like. I think the collection is about getting back.

There’s a real sense of the importance of location in this collection, particularly regarding Sheffield and London – what impact has place had on you and your writing?
I don’t understand why place is so important to me. I didn’t set out to write poetry that harps on about Sheffield all the time; I just don’t seem to be able to stop doing it. Its always seemed to me that people who come from Sheffield care deeply about where they come from – though I’m not presuming to speak for of an entire city here, loads of them might hate Sheffield! But to me, it seems to stamp itself on you somehow, so that even if you move away and never mention it again, it’s in your heart, it influences you. I don’t think it’s just pride, it’s more a sense of belonging that you can’t ever get rid of even if you want to. Also it’s beautiful in Yorkshire. I think my obsession with imagery wouldn’t be so prominent if I wasn’t from there.

Has the move from Sheffield to London influenced any particular changes in your writing?
I’d just turned nineteen when I moved to London with a copy of Songs of Innocence and Experience by Blake, and The Book of Longing by Leonard Cohen – and I’d only read a couple of the Leonard Cohen; I didn’t know anything about poetry. I’d been doing a bit of spoken word in Sheffield, which I was okay at. I loved hip-hop and I’d seen a few spoken word artists at festivals so I reckoned I knew what I was doing when it came to poetry – which I didn’t. It’s taken a long time for me to understand the level of control you need to be able to exert over a poem. The edit is the thing. I think that I came here with a poetic voice, and I don’t think my style has changed at its heart, but my understanding of poetry as a craft and editing as a practice has improved, and I hope it continues to.

Your collection also has a real personal feel – how does it feel to have written something like that, and to share it with others?
I’ve never really had boundary limits when it comes to that kind of thing. I don’t sit down to write and envisage the dimly-lit room full of shuffling poets that I will eventually have to stand up in front of and read my poem out to, if I did that then maybe I would restrict my content. But then, maybe not: I write what I need to, what is important to me, and if I couldn’t do that then I think the importance of poetry would be lost to me. It’s connection. But at the same time, whilst I want there to be a personal feel to my poetry, I don’t want my personal experiences made to loosely resemble a poem. Sylvia Plath said that you should ‘be able to control and manipulate experiences, even the most terrifying, with an informed and intelligent mind’. I work towards writing well-structured, controlled poetry that is informed by my experiences, and try to avoid at all costs just blurting my experiences onto a page. Perhaps I’m not always successful.

You’re also a fantastic performer of poetry – what do you make of the differences between the page and stage? Are there any for you?
Cheers! I’m not sure about this… performing poetry is a weird experience for me. I don’t mean to belittle it because poetry is meant to be spoken and shared in rooms and across campfires or what have you, and performing poems always helps me to understand what’s working and what’s not working in my poetry, but I’m only just getting back into reading. I became a bit jaded about spoken word nights and things like that – I think most people that practice spoken word are quite jaded about it; they all tend to write poems about the fact. Sometimes there’s just not a good vibe at those nights and I ended up not wanting much to do with it. But that’s certainly not always the case, and spoken word was what got me into poetry in the first place because I found it so exciting, and there was such a friendly little community of spoken word in Sheffield. I think when it comes to performing poems that you’ve written for the page, writing and performing are two differnt art forms in that they demand different skills from you, but they’re completely interrelated – practicing both will make you a much better writer.

Where do you find your inspiration when writing?
My inspiration comes from people and places. That sounds a silly thing to say because it sort of covers most sources, but those are the two key factors for me. I’ve never written a poem about animals or plants or great, big man-made things, I don’t think those things inspire me so often. It’s more like overheard conversations on tubes, or the way a stranger laughs in a pub garden, or when you can see that a couple are in the middle of a blazing row but they’re having to keep their mouths shut in public. Pubs always seem to be a great source of inspiration for me – not so much the drinking part because that’s false inspiration, but when I worked in a pub I was writing almost non-stop. You catch a lot of vulnerable moments in a pub; it’s that inner workings/outer appearance thing again.

Who or what are your biggest influences?
Sheffield, Paul Beatty, William Blake, the people in Sheffield, A Tribe Called Quest, Kate Tempest, Akala, F. Scott Fitzgerald, Scroobius Pip, MF Doom, Toni Morison, Mike Skinner, Sylvia Plath, South London, Lauryn Hill, Ted Hughes, Malcolm X’s autobiography, the Peak District, Stankonia by Outkast, the artist Jenny Saville. That’s a bit of an offhand list, but they’re the people and the things that I can remember as being turning points for me after I’d read them, seen them or listened to them, or places that are very important to me. All of those things have influenced my writing in some way.

What is it about poetry that works for you as a creative output?
The concentration. The lack of space. You have to pinpoint your meaning to a handful of words, shape everything into that space, pick everything carefully. There’s no room for messing about with poetry.

What’s the biggest thing you’ve learnt during your time university?
To trust my instincts. I think when you start out at University you’re eager to please people; you’ll make friends with everyone, you’ll wear a different face every week and ignore the voice in your head saying this isn’t actually fun, I think I’d rather go home. Trust that voice. It’ll save you a lot of bother later. That holds true for writing as well, especially when people try to influence your style in different directions. You have to trust that you know where you’re going, which is difficult when you’re just starting out.

How does it feel to have finished university?
Strange. For all my whining, I know that those three years of just reading and writing stuff down are probably going to have been the easiest and nicest of my life. I’m excited to get on and start new projects and do new things, but I’m in a strange state of flux at the minute that’s getting on my nerves. I just want to crack on with things! But in a few weeks I should be in a position where things are settling down and I can start writing and thinking of the next project.

What once piece of advice would you give to any would-be poet or writer?
Keep writing.

So what’s next for you – what are your plans now you’ve finished university? Any projects we should know about?
I’ve got a couple of things that if they work out could be really good fun, but I’ve a while to see about those yet. I’ve put Taking Gennels up for sale on my Facebook page so anyone can message me if they fancy a copy. I’ve an internship with Apples and Snakes about to start, so I’ll be hanging around their spoken word nights for a few months. Other than that I’m just writing. Hopefully you’ll get to read some of it soon.