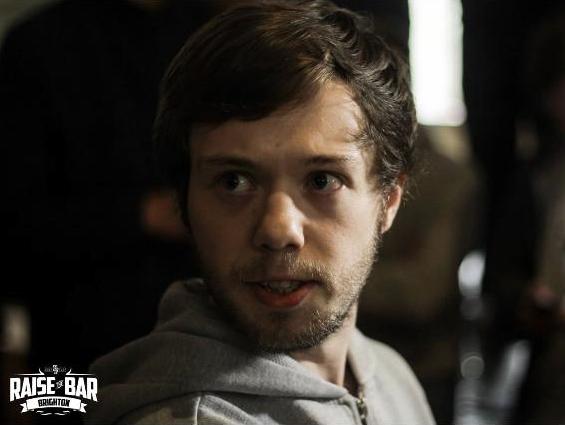 Livvy Hooper continues her look at the University of Greenwich’s brightest talents; focussing her spotlight on undergraduate poets who featured in the end of year exhibition and reading; these are the ones to watch.

Over the coming weeks I’ll be getting to know some of the best poets from the University of Greenwich’s Creative Writing poetry programmes, with interviews and excerpts from their debut poetry collections. The majority of these poets have recently finished their studies and are looking to careers in the arts, so I’ll be putting them under the microscope to find out what makes them tick, how they tock, and just why we should be keeping our eye on them.

Tell us a bit about yourself; what makes Jacob, Jacob?
Well i’m Jacob Birkinshaw, 22 years old and from a moderately sized London-overspill town called Basingstoke. I was born in my parents bedroom in the house my father still lives in. Both my parents came from Manchester (one with large Irish connections) and they moved to Basingstoke a few years before I was born. What makes me, ME, is a much more difficult question to answer, and something I’d prefer to be defined by peers based on the things I do, rather than the things I feel about myself… Bad answer, I know. But I’ve never really thought about it before. Maybe being a smart-arse; I’m definitely that.

How did you “get into” poetry?
A series of coincidences. I was in the bottom set in English till about 11, until Ms. Keenan saw that I was doing well in Maths, Science, History etc. and began to wonder if I was being held-back by the arbitrary educational divides children get put in from a young age (not that I’d be bitter or anything). I quickly moved up in line with how I was doing in other subjects, but never really thought about becoming a writer. I first wrote something while my friends were forming a band; two of them were arguing about who would write songs, and neither had any history of writing anything poetic, so I thought, well, why don’t I give it a go? I wrote my first verse/chorus when I was 16, to the melody of Radiohead’s ‘Jigsaw Falling Into Place’ and enjoyed it. I quickly switched to Rap, which I enjoyed more, but never had a producer or the set-up to record anything. Before long I began to write them as accapellas, moving further and further away from the rigid musical restraints to just doing what I wanted. When I was 19 I saw a poetry competition advertised in my college English Department, and I sent in a 16-bar rap I had done a couple days earlier. A few weeks later my mum came to see me at about 11 at night – I assumed I’d done something wrong – but she said “Did you enter a poetry competition?” I said yes, and she gave me a letter saying I’d won. That was the first time I thought I might actually be alright at this writing thing. A year later, by the time I was on my way to University, my degree choice had changed from PPE to Philosophy and Creative Writing. Within the first week at University I dropped Philosophy because it felt assinine, and moved to Creative Writing full time. Which is when this whole mess started…

What is it about Hip-Hop that works so well when you’re writing?
It’s how I was brought up musically, and it’s what I’ve written more of as a writer. My oldest brother is 9 years my senior, and he was very into Hip-Hop when I was in my formative years. Supreme Clientele by Ghostface Killah (which I “borrowed” from him) was the first album I ever listened to front-to-back and I immedietly fell in love with the complex lyricism and rhythm: it was unlike anything I had ever heard before, and I immersed myself in the genre. After I’d written a few bad songs, I wrote almost entirely in rap for about 3 years, filling up hundreds of pages with terrible lyrics.) When I won my first competition I began to think about rap as poetry. For a while everything I wrote was very messy, but about 18 months ago I began to develop exponentially both in technical rapping ability and more ‘classical’ poetic style. My poetry became more compressed, abstract, and refined, and I began to feel able to conceptualise and attempt techniques used by some of the best writers in Hip-Hop. Nowadays both are compartmentalised in my head, but because I’ve worked on both a lot – and continue to try and improve – I’m much more able to combine the two styles for certain pieces, and judge when to use the different tools for best effect.

Where do you find inspiration when writing?
Poetically, it’s normally trying to put an experience, story, or feeling into words. If I’m writing in a rapping format there are three ways I generally get inspiration: one is seeing/reading/thinking of a powerful statement, something that without any extra technical aspect resonates: two, freestyling; this is rapping to myself without any prior script just trying to put words and ideas together on the spot – it’s hit-and-miss, but it’s amazing what your brain can come up when you let it off the leash: three, thinking of a simile, metaphor, a homophonic, a piece of wordplay (all common rapping techniques) and building around it. The third is hard to do well, but easy to do badly.

What’s it like studying at Greenwich Maritime campus?
It’s the reason I came to the university; no other place grabbed me on the open day like Greenwich did. Although it may be the most inhospitable veterans hospital in British history, it’s a beautiful place to study, and I wish I had more lecture hours at university to spend more time there.

Who or what are your biggest influences?
Strictly poets, my biggest influence by a long way is Charles Bukowski: I can’t think of any poet that comes close. The format of his poetry particularly blew me away. In a more general sense it would be musicians and rappers such as Bob Dylan, Gil-Scott Heron, MF DOOM, Kendrick Lamar, Rakim, Nas, Loaded Lux, GZA, Illmaculate, Ness Lee… basically a lot of rappers.

What do you make of the third years and their work?
There are a lot of talented, weird, and wonderful writers in third year. Some of the poems I’ve heard have been brilliant and I don’t doubt that at least a couple of them will be making waves in the poetry scene over the coming years.

What do you want to do after Uni?
My aspiration is to become an original series television screenwriter. Obviously I want to take my poetry and hip-hop writing as far as I can, but I think I love those things too much to want my livelihood to depend on getting paycheque from them; I worry that it would take away from the enjoyment.

What’s the biggest thing you’ve learnt during your time at university so far?
Seek criticism.

What one piece of advice would you give any would-be poet?
Don’t filter your writing; write exactly how you feel and edit later, because chances are someone else feels that way too.

Where can we see you in action next?
I’ve got a few rap battles out on the “Don’t Flop Extra” channel on YouTube, as well as a few yet-to-be-completed musical projects with a number of producers. Poetry-wise, I’m likely to be at any poetry event organised in the Greenwich area, and I attend the majority of open-mic/slam events that I hear about through social media (read – not very many). Beyond that I’m very unorganised.

You can check out Jacob’s most recent rap battle here, and follow him on social media.