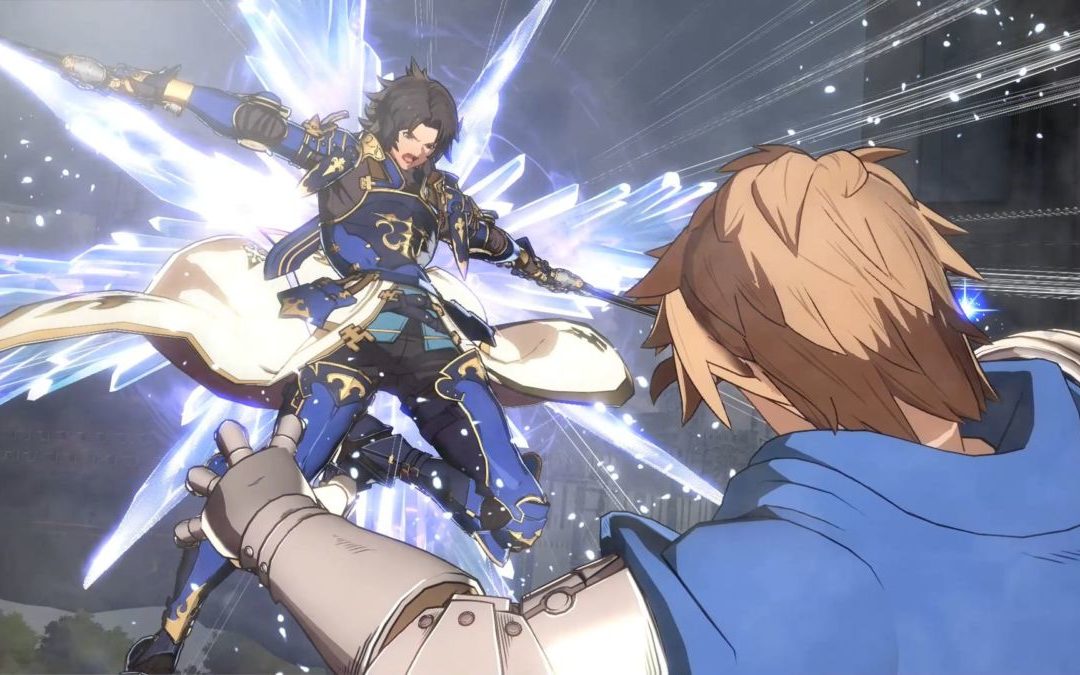 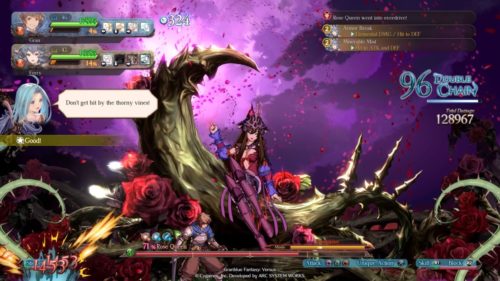 There are four mainstays of the fighting genre: Street Fighter, Tekken, Mortal Kombat and Soulcalibur, yet we tend to forget that there is more to life outside those four sturdy pillars. They are never going to go away, so why bother trying to achieve something new? Granblue Fantasy Versus has its flaws, though it does pack a passionate punch of heart and dedication, introducing us to a new fighting franchise Arc System Works want to see succeed and challenge those four beloved franchises.

Though very popular in its native Japan, Granblue Fantasy is a newer franchise in the West. Released in 2014 as a mobile gacha game, this is Granblue’s first major attempt at finding a western fanbase. If I haven’t got my research wrong and the internet isn’t collectively gathering their pots of tar and feathers to chase me out of the village, I can say that this is a promising start. 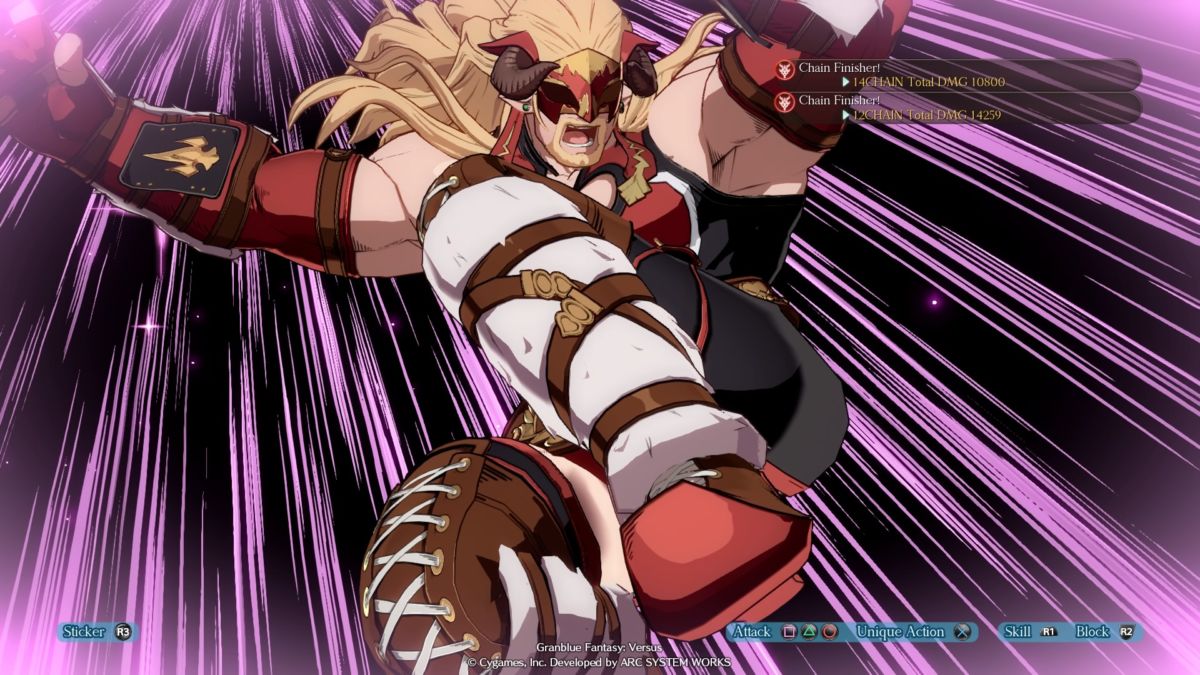 It became steadily clear during my first few hours playing Granblue that Arc System Works hasn’t stuck to one solid foundation and built on that. This lack of a consistent flow is especially noticeable with the game’s fairly light roster – with two characters already blocked by a paywall. However, it should be noted that one character can be unlocked after completing its RPG Mode.

Some of its roster features quick and nimble characters, landing combos left, right and center, while others feel sluggish, failing to respond to any button combos you are trying to discover, but if used right, pack damaging moves that take a fair chunk of health. There isn’t anyone that sat neatly in the middle in terms of balance, taking you from one extreme of fighting to the next. 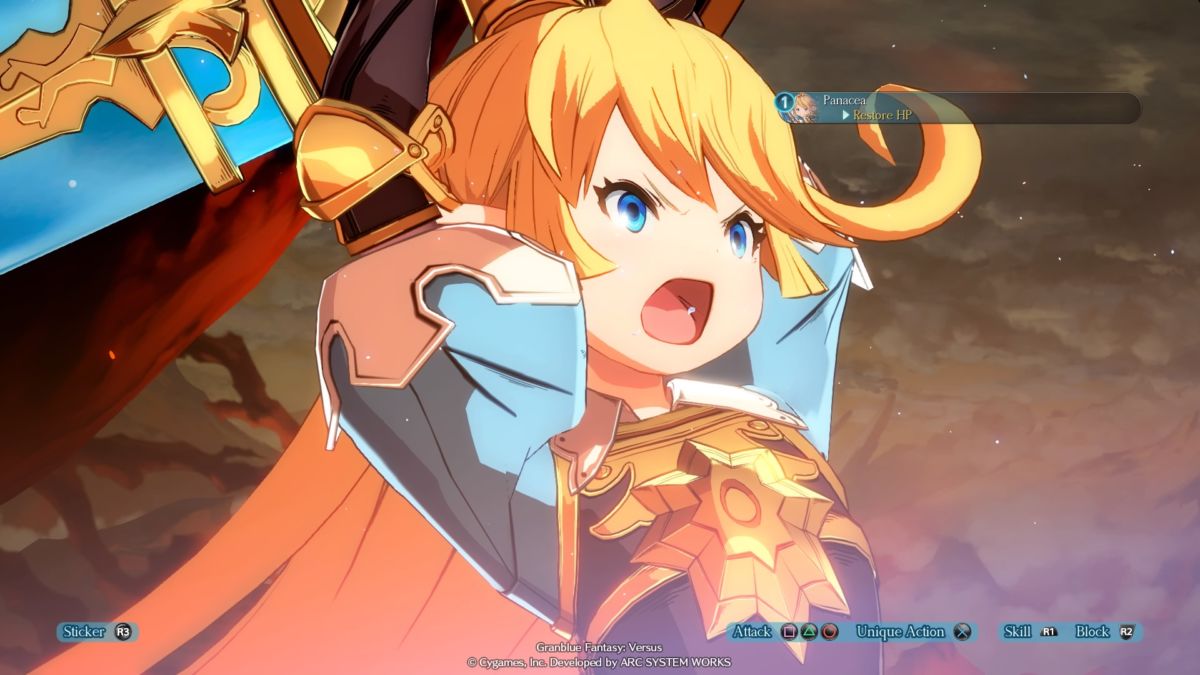 To the game’s credit, it does something most fighting games don’t and actually holds the player’s hand to begin with, rather than giving us the basics and hoping for the best. It’s an aspect Arc System is best known for and it’s great that they’re keeping that tradition alive. Its tutorial alone is fit to burst with the basic, intermediate and more advanced controls, finding you a playstyle that best suits you.

The shoulder buttons control your block, counter and special attacks, while your face buttons are your damage dealers. Square being your light attack, triangle your medium attack and circle as your heavy attack, while the X button is your unique attack. Some fighters can get a health boost, whereas others can prop up a shielded attack or ranged attack. 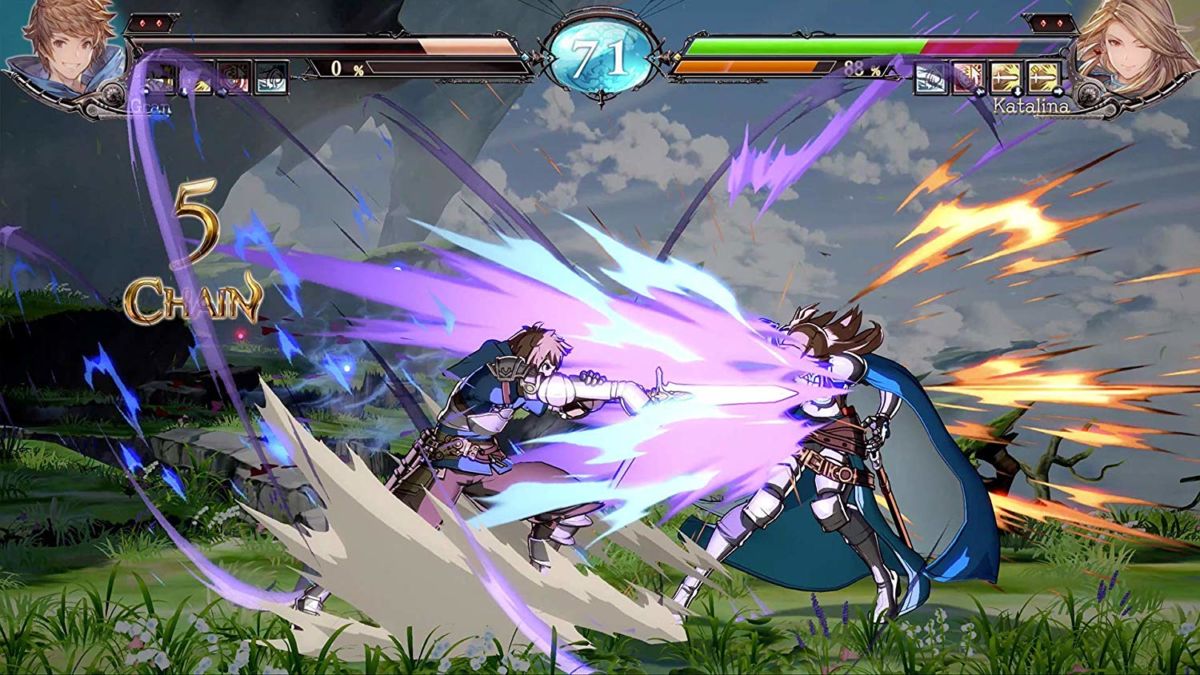 Mashing triangle and circle will achieve an overhead attack, whereas triangle and square will use a throw attack. Despite its light roster, GVF does everything it can to make each fighter unique, giving players open opportunities to get more creative in their methods. There are also auto combos available if controls are set to their basic functions, which will appeal to the novices or intermediate fighters among us.

The accessibility of GFV is where this title shines: if you just want to blast through the arcade for a few minutes, combos are quite easy to rack up. However, if you are a more hardened veteran who likes to take their Street Fighter with an extra dose of handicap, there are options to change the mechanics from basic to technical, giving the player more options when dealing with longer combos, parries and other little tricks to help gain victories. 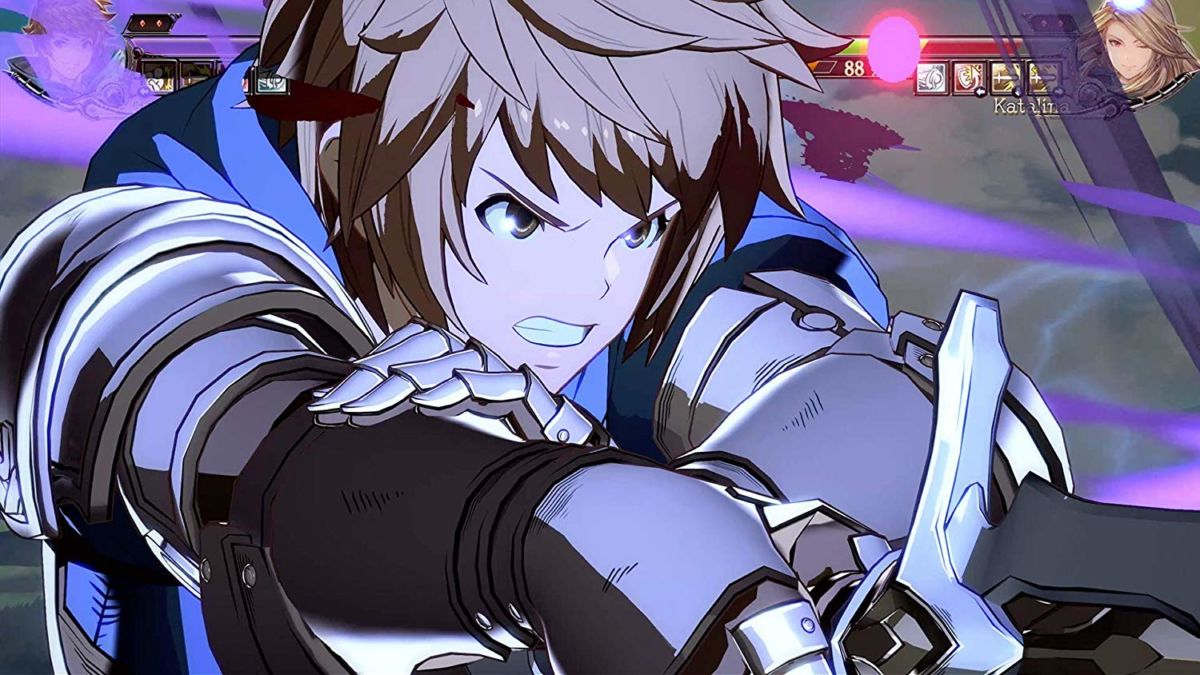 While there isn’t anything inherently wrong with its basic control scheme, GFV does respond better with its advanced control layout and you do miss out on some of the more devastating moves. Hopefully, this will give the player an incentive to get out of their comfort zone and try something more challenging. My problem with GVF’s basic control functions became prevalent during my time in Arcade Mode where, despite playing on normal difficulty, my opponents appeared to not fight back. I could simply back the opponent into the corner and just wail on them with the same basic square, square, square combo.

It’s also worth noting the game’s Skybound Arts moves, GVF’s killer app against the competition. Some are fairly easy to pull off, asking you to hold the R1 button with a directional button and either square, circle or triangle. Cooldowns are placed in to keep things fair and depending on which combo you use, some cooldowns last longer than others. 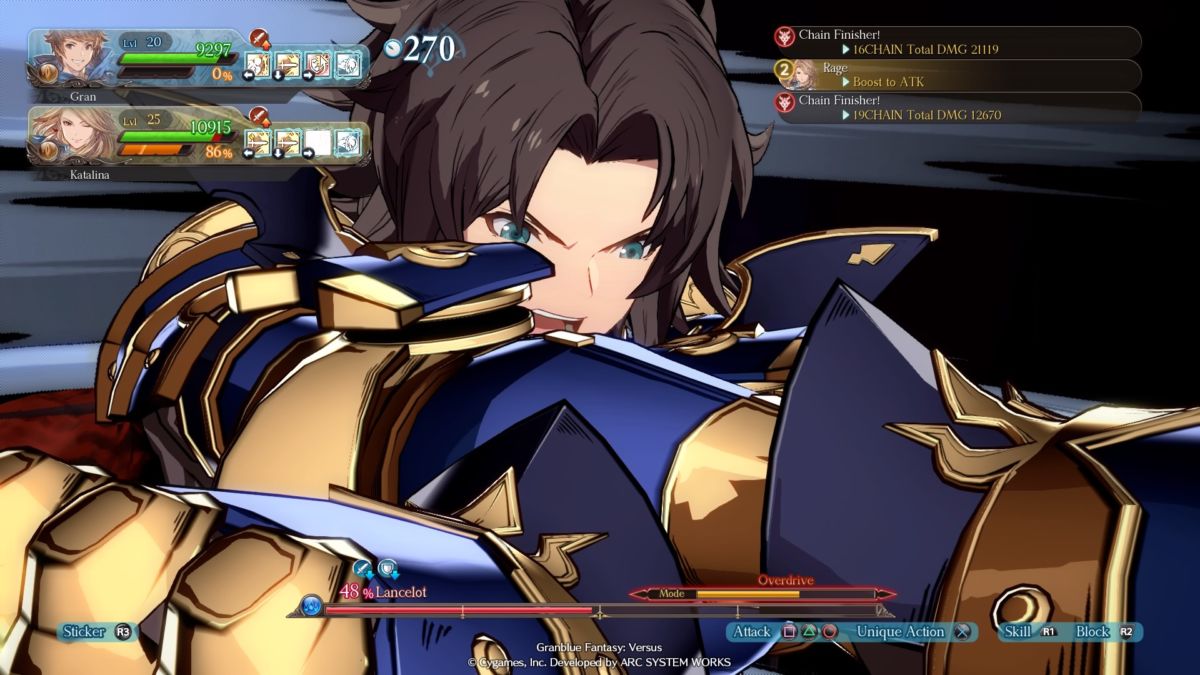 The challenge comes when your character’s Super Skybound Arts move is charged to 100% as you need some pinpoint precision to hit the double hadouken motion and R1 simultaneously. To defend the combination, it does make you want to nail it, as it makes for that endorphin rush all the sweeter. It will take practice to get used to the controls, especially if you’re not well-versed in fighting games, but in comparison to other games on the market, it’s not the most intense.

What will mainly keep you playing through GFV is the presentation style. With a cute anime style, GFV really does stick out when compared to its ultra-realistic peers in the fighting genre. Its 2.5D graphics might be a hook Arc System goes back to often in their games, but you cannot deny just how much a charm it is — you’d be forgiven if you just wanted to start up a match and gawk at the wonderful backgrounds the game has to offer. 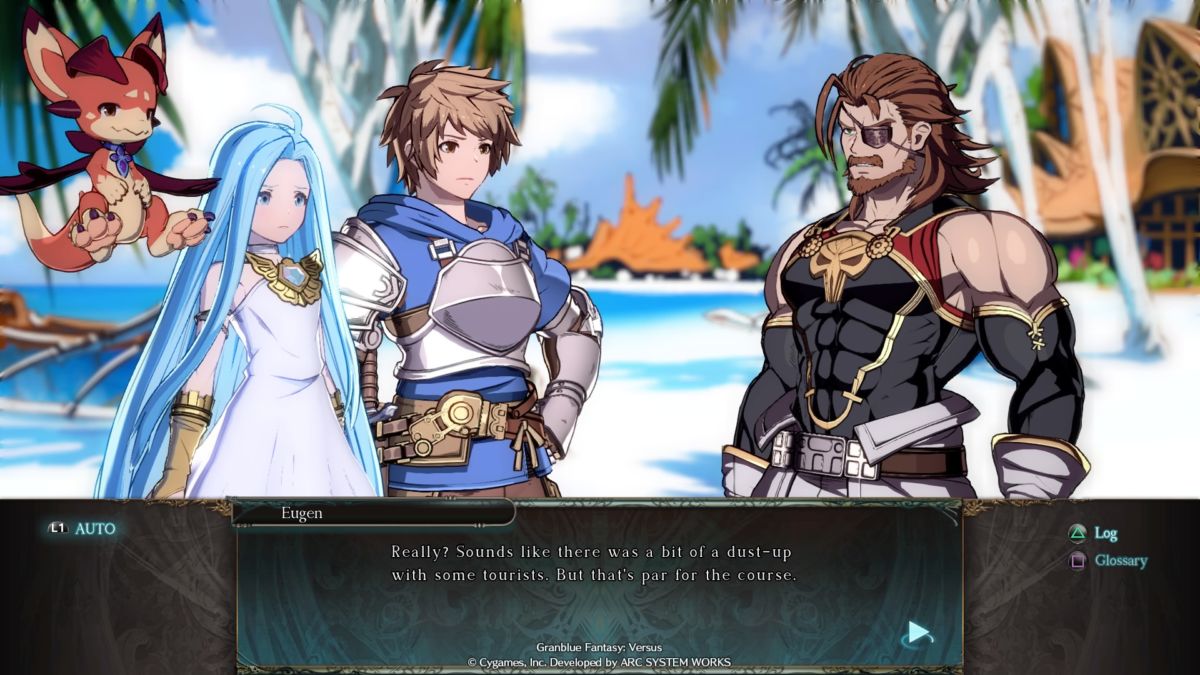 Secondly, for a title that’s main focus is really online and local multiplayer, there’s a surprising amount of single-player opportunities on offer, namely its fun and addictive RPG Mode. RPG Mode takes the player through the world of Granblue, which is fairly paint by numbers for its genre. Gran is a protector of Lyria, a girl with powers that the evil empire is eyeing up as a snack. They gather more people to their party, only they find that the empire is being manipulated by a higher evil that wants to destroy the world.

Most levels in RPG Mode take the player through a beat em up area, reminiscent of titles such as Streets of Rage or Final Fight. It’s tough to actually not pass most levels with an S rank, giving you more loot and gold that you could possibly need. Each level has a preferred element you need to do combat in, such as fire, water, earth, wind, dark and light. You can upgrade your gathered loot to make your character more powerful, especially handy when it comes to the odd boss that will take you a few attempts to master.

To RPG Mode’s credit, Arc System do their best to help explain a lot of questions about the characters of the world of Granblue. While there were still a few holes that needed filling – such as the history of the Astrals or why the Erste Empire wanted to keep them a secret — there’s still plenty of information offered to invest you in the world around you. Another positive to note is that as you beat bosses, some will join your party, which will open some extra levels to help you understand GFV’s roster and special moves. Add the Tower Of Babel mode, which works similarly to Mortal Kombat’s Towers with a growing challenge the more levels are cleared, and there is plenty to be getting on with.

Granblue Fantasy Versus is not a perfect fighter by any leap of the imagination, but what it lacks with its inconsistent mechanics and light roster, it makes up for as a product of passion and heart. Its less-is-more approach and accessibility for novices and hardcore fans alike are great for fighting fans of all backgrounds. With a little more care paid to its core mechanics, there’s no telling the heights this franchise could reach. If you are looking for something a little different to the four sturdy pillars that hold the fighting genre up, you will not be disappointed with Granblue. 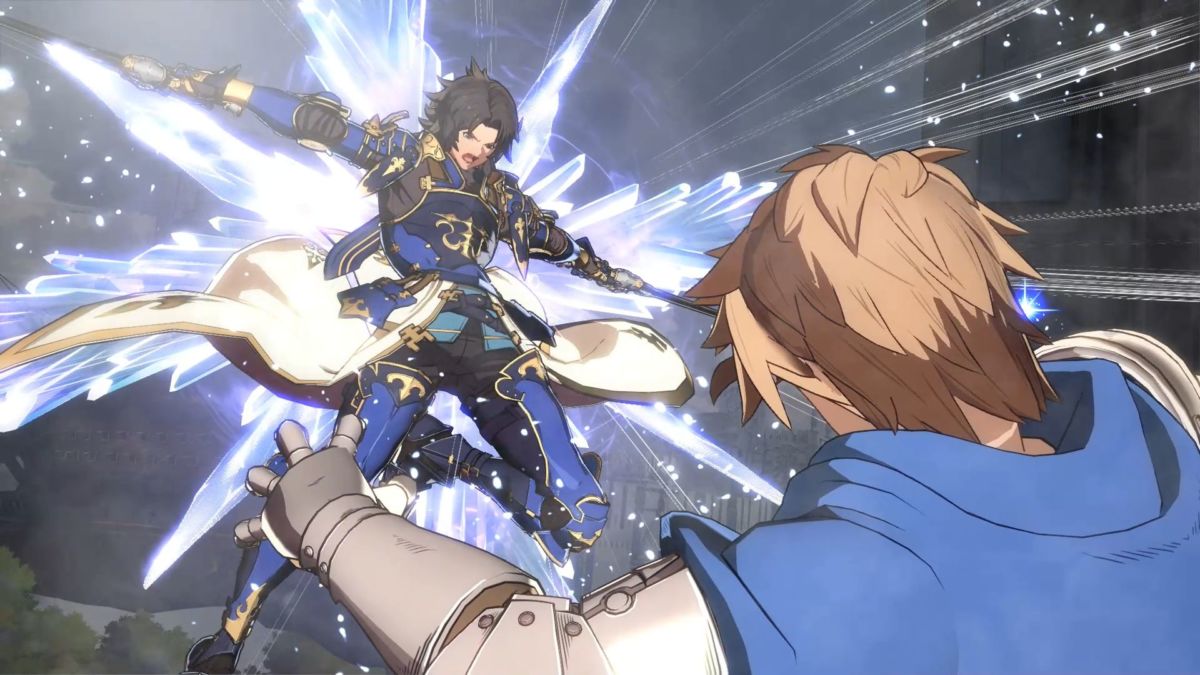 Verdict
It’s easy to see why the Granblue series is popular in Japan and hopefully this title will convince you too. Granblue Fantasy Versus is a fun and addictive new challenger to the fighting game throne.
7
Cultured Vultures is a pop culture website established in 2013 covering all things gaming, movies, and more. We eat your words.
All The News On The Biggest Games