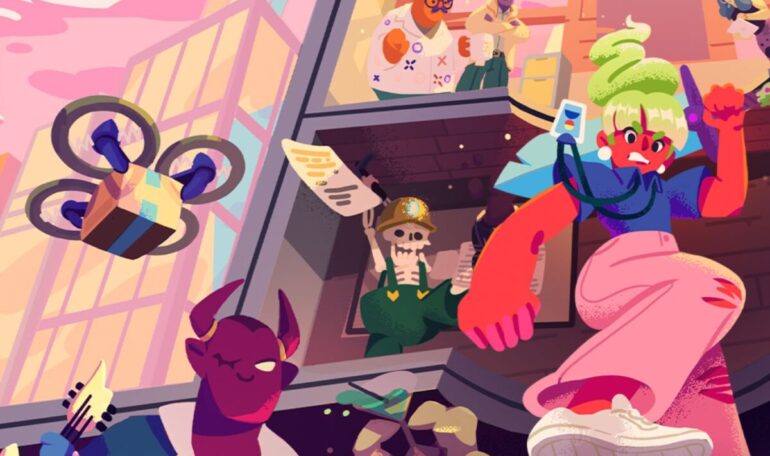 If you’re in the mood for dungeon crawling with a slice of start-up culture satire, Going Under is certainly a wise choice for your very niche specifications. As a new intern for the start-up drinks company Fizzle, who were recently bought out by the giant corporation Cubicle, you find yourself lumped with the grunt work instead of actually doing the job you applied for. That grunt work just happens to be exploring a dungeon to batter monsters, but that’s neither here nor there.

While the third person roguelike dungeon crawler might be a unique framework for a send-up of Silicon Valley-esque tech start-ups and their overall vibe, it’s one that Going Under absolutely nails from the get-go. In fact, it nails it almost a little bit too well, because after only an hour with the game, I found myself comparing main character Jacqueline’s experience with my own.

For a bit of background, in 2018 I took on an unpaid internship for a mental health/tech start-up based in Manchester. I worked there one day a week for a total of 7ish months, before leaving around Christmas after coming to a number of personal realisations about the nature of the company, my role and responsibilities and so on. I won’t name names, or put the company on blast on anything, but Going Under has brought some of those experiences back to the surface.

Going Under’s take on the world of start-ups seems to be eyeing the culture’s end goal, with Cubicle acting as a big conglomerate of companies, each with their own unique ideas just waiting for a cash injection so they can rent an office space and build a slide. While slides weren’t necessarily discussed during my start-up tenure, I’m sure the idea would have made it past the planning stages.

Instead of Cubicle, my real internship took place mostly inside of WeWork office spaces. WeWork is a company that allows professionals and start-ups to rent office space, network with fellow professionals and, if my experience was anything to go by, host parties every Wednesday afternoon that disrupt everyone on that floor.

Cubicle itself is a bit of an all encompassing parody. There’s shades of what WeWork could be, with its library of start-up companies operating within its remit, but the main target is Amazon, with its drone delivery service and the Cubicle Primo service mentioned in conversations. Perhaps it wouldn’t be too much of a stretch for a company like WeWork to partner with Amazon to simply buy start-ups operating within it, becoming like the game’s Cubicle.

In Going Under, you join Fizzle as a marketing intern, before very quickly being told to go down into the dungeon and batter some monsters. So much for writing cool social media posts, eh? No matter what your job role says, if you’re an unpaid intern, you’re doing whatever the employees tell you to do, whether that’s getting coffee, pitching in during team meetings or wrapping a keyboard around some demon’s face.

My internship was similar, as I joined as a content editor of sorts. My responsibilities were to create and source content for the website’s blog posts, which did form the majority of my output, but I was also expected to attend planned evening events, create content based on the whims of the boss, or perform work duties outside of the previously agreed upon one day a week.

Once Jacqueline displays some dissatisfaction over her duties not matching her applied role, her boss gives her a spiel about how they can always be replaced, convincing her to stick around instead of quitting on the spot. For me, it was a similar situation, as I was trying to juggle being Cultured Vultures’ gaming editor while on the internship, and money was tight.

This was something I was reminded of any time the CEO mentioned how profitable the company would be, if I just stuck around for 3-5 years. Team meetings regarding equity shares and investment plans, all of which talking about money that never seemed to materialise, yet whenever my resolve was tested, I’d be guilt-tripped into staying because “you don’t want to live at home for the rest of your life, right?”

Perhaps the moment that cinched the comparison for me was a cutscene that played after a few unsuccessful dungeon runs. Once returning to the office, a meeting takes place with Fizzle’s CEO, Ray, along with the company’s AI that helps make business decisions (roll with it). After some deliberation, the AI decides that the best way for Fizzle to grow is to create a companion app, so Ray immediately decides to pivot the entire company on a whim.

This is an exact mirror of my own personal experience. When I joined, the company was designed to create a support forum for those whose family members and friends who had committed suicide. However, by the time I left, it had pivoted completely to a generic mental health awareness website, extolling the virtues of mindfulness, meditation and managing your mental health in the workplace. While this pivot didn’t come from an AI decision, it was due to investors and the advice of certain mentors.

It was a complete 180 on what the company was supposed to stand for, what attracted me to it in the first place, and was one of the biggest contributing factors in me ultimately leaving. That, and being told I would never get paid at all if I went freelance. That doesn’t help either. Turns out I’m a little bit more naive than I thought I was.

The success of a satire hinges on the abilities to accurately depict the subject it’s mocking, and Going Under nails the start-up culture its lampooning effectively. If nothing else, clobbering some tech start-up monsters with a computer monitor offers me a brilliant chance to exorcise some of my own demons, and for that, Going Under is worth the investment.

For the sake of disclosure, a code was provided by Team17 which was used in the creation of this article.