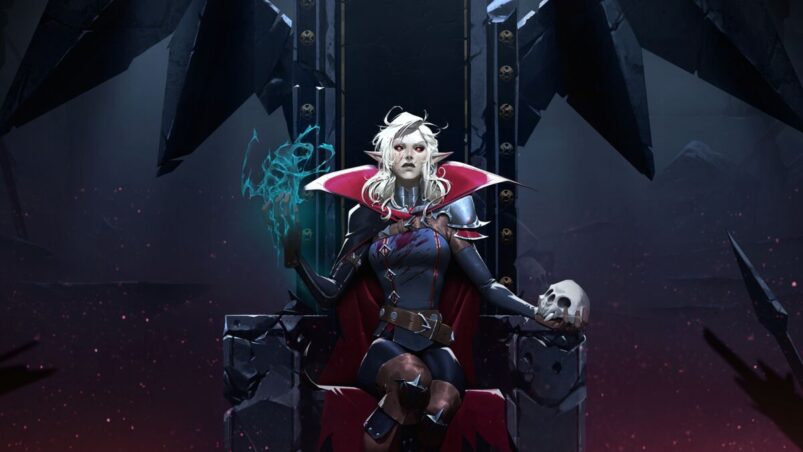 Vampires have been a wildly popular fiend in global folklore for ages, haunting the nightmares of younglings and inspiring the creativity of the twisted and unafraid. Gaming has taken to blood-sucking culture quite well, dishing out in-depth vampiric experiences like V Rising, an open world survival adventure. Though Stunlock Studios’ latest vampiric outing is quite unique in the blending of its theme, setting, and mechanics, if you find yourself smitten, we’ve compiled a list of the best games like V Rising.

While the following ten games may not be identical to Stunlock Studios’ smash hit in many ways, as you sink yourself into their interactive thrills, you’ll start to see how these games like V Rising connect.

Are BloodRayne and V Rising similar in tone? Absolutely not. Do they share the same gameplay mechanics? Not one bit. Where these two titles cross is a common theme – war. While V Rising’s war is a bit more player-driven, the titular vamp of this action-packed third-person shooter is a nuisance for Germany’s Nazi power, which is on the cusp of launching the Second World War.

BloodRayne doesn’t hold back on the vampy goodness, with Rayne thriving on blood and unleashing a host of mystical powers. Arguably the coolest part of her arsenal is her pair of blades, which she wields with the proficiency and skill of a vampire used to killing.

The game hasn’t aged all that well (even with its remaster), but if it’s bloody, ruthless vampire action you’re looking for, the janky controls may be worth playing through.

If there’s one place V Rising shines, it’s with its character customization. Amazon Game’s free-to-play RPG Lost Ark isn’t too far behind, offering different tiers of customization that allow players to create the perfect warrior. Character progression is really the core element of the entire experience, similar to V Rising.

Lost Ark’s class-based characters all serve a unique purpose on their quest to find the titular Lost Ark. Ample skill trees and a great variety of weapons give players near-complete control over the type of hero they aim to be.

The two properties share a few similar mechanics, combat, and camera angle, though it’s worth noting that V Rising is a bit darker in its themes. Lost Ark can get a little corny, but there’s plenty there that makes overlooking its relatively poor story development much easier.

Let’s step away from vampires for a moment and travel to the fantastical Hyborian Age. Sentenced to death by crucifixion, players have a rough start in Conan Exiles until the titular hero arrives to set them free. From there, it’s a free-for-all of building, progressing, and surviving an unforgiving world.

Many of V Rising’s mechanics revolve around building, and Exiles does a similarly wonderful job of blending action with the meticulousness of crafting an empire. Just as in V Rising, your enemies may seem like your biggest threat in Conan Exiles, but the most complicated piece of the puzzle is doing enough to leave a lasting legacy.

As you navigate the dangerous world of Conan Exiles, you’ll have plenty of opportunities to fully flesh out a character through the game’s ample customization options and class system. In V Rising, you’re creating a vampire to rule the roost. In Exiles, it’s all about the muscular hero or heroine that will flesh out their kingdom.

If you like the empire-building of V Rising, you’re likely going to enjoy the in-depth kingdom creation of Medieval Dynasty. As the name implies, you’re tasked with building a dynasty from the ground up. It’s no easy feat when you’re faced with limited supplies, thieves and other ne’er-do-wells, and decisions that could make or your break your progression.

Like V Rising, Medieval Dynasty starts you off with practically nothing. Thankfully, the world is full of resources to be mined and turned into tools, weapons, and the safety and shelter needed to survive the night ( or day in V Rising). Medieval Dynasty may be a bit slower-paced than the vampiric romp, but the reward of a hard day’s work is still a big part of the experience.

With patience, skill, and maybe a hint of luck, you’ll go from a peasant with no power to a dynasty sure to last through the ages.

There is a lot that could’ve made Vampyr a more well-rounded experience, but when it comes to being a vampire game, DONTNOD’s drama does a great job of highlighting the question of morality. Not that doubting your place as a vampire is part of V Rising’s story, but Vampyr serves as a great contrast to the freedom of blood-sucking in the online survival game.

Where the two games do crossover is with the vampiric abilities. V Rising may allow for more customization, but Vampyr does a suitable job of providing players with a fun assortment of vampire abilities to tinker around with. Freshly turned Jonathan Reid has a lot to learn about being a vampire, but as he learns, players unlock a fun selection of skills that go beyond blood-sucking.

Both games also have a gothic aesthetic, which creates a dark and dreary atmosphere. So while their playstyles and genre may differ, V Rising and Vampyr do look quite similar in style.

Despite its central characters being of the undead variety, V Rising isn’t what we’d call a scary game. So, we’d like to preface our recommendation of Darkwood with a warning. It’s scary. Maybe not nightmare-inducing, but it definitely won’t be everyone’s bag of tea with its slow-burn horror, eerie audio, and disturbing visuals.

Others, on the other hand, will appreciate its crafting mechanics, especially if they liked those of V Rising. Darkwood takes survival horror to a new level, throwing players into the middle of an ominous forest that appeared out of nowhere. As “The Stranger,” players navigate the horrid world, battling an unforgiving day/night cycle that brings about nocturnal beasties. To survive, The Stranger has to scour for resources, barricade himself into makeshift safehouses, and hope that nothing from the outside can get in.

The tone of Darkwood is a bit bleaker than the vampire survival romp, but it’s still one of the best games like V Rising.

Surviving the RPG adventure of Divinity: Original Sin 2 requires teamwork. Building up your vampire kingdom in V Rising also requires teamwork. Make the wrong allies and enemies in either game, and you’re in for a pretty difficult time.

Original Sin 2 builds upon the original with some much-needed gameplay tweaks, delivering a well-rounded tactical turn-based strategy RPG. You’ll have to build the perfect party to make any progress in the open world and put an end to the Void. Choose your character from six races, including the Undead, and set out alone or with up to four friends through Rivellon to battle the forces of evil.

Though the top-down perspective may be a shallow comparison between Divinity and V Rising, the two also share similar inventory management and character customization options. The deep RPG experience of Divinity should appeal to anyone that enjoyed V Rising’s character development.

If one of the biggest appeals of V Rising is simply that you’re a vampire, then you’re absolutely going to want to take a crack at The Elder Scrolls Online. More specifically, you’ll want to boot up, rush to find a Bloodfiend, and let that sucker bite right into you.

There are so many ways to play The Elder Scrolls Online, but joining the ranks of the blood-sucking undead is arguably one of the best. The additional skill tree and accompanying abilities expand on the core experience, making you feel like a true creature of the night. Things do get a little more complicated thanks to a hit to your overall health regeneration, but getting the chance to sneak up behind an enemy and drain them of their life force is quite delightful.

While V Rising definitely puts more thought into its vampiric skills and abilities, ESO is worth diving into to fill the blood-sucking void.

A game doesn’t have to be steeped in vampiric lore to land on a list of the best games like V Rising. Valheim is a prime example, as it shares quite a few gameplay elements. Players will sink themselves into Norse mythology in this open world online survival game, where the only means of true survival is mining resources to craft bigger and better tools, weapons, and shelter.

Like in V Rising, players will need to build a stronghold of their own, a hub of sorts to return to after a long day of adventuring and solidifying their place in Viking legend. Beasts of Norse folklore seek to impede your progress through this procedurally-generated purgatory. To fight them off, you’ll need to master your arsenal, understand the nuances of each weapon, and approach each encounter carefully.

Valheim features a vibrant world full of wonders and fantastical beings, which can be experienced with up to nine friends. As a relative newcomer to the survival genre, the game does a decent job of standing out and bringing something new to the table.

If there’s one thing that every good vampire game must have, it’s vampire politics and drama. The Legacy of Kain series has always had a firm grasp on building expansive lore that tackles these two elements very well. While Defiance isn’t the strongest entry of the series, it continues the trend well.

Defiance bounces between the titular vampire Kain and Raziel, the Soul Reaver, as they’re forced to work together and battle back the evils looking to consume their world. Having spent much of the series, which started in 1996, duking it out, Defiance flipped the script to give the two a mutual purpose. For players, that means diverse gameplay as both Kain and Raziel are killers with unique abilities.

Legacy of Kain is all about the vampires, and if you’re needing a little blood-sucking fix after V Rising, Defiance is a great place to get it from. As for the previous entries, do a quick Wikipedia lesson on their plots, and you’ll be good to go.

READ NEXT: 10 Games Like Hunt: Showdown You Should Play