A lot of nightmares to enjoy. 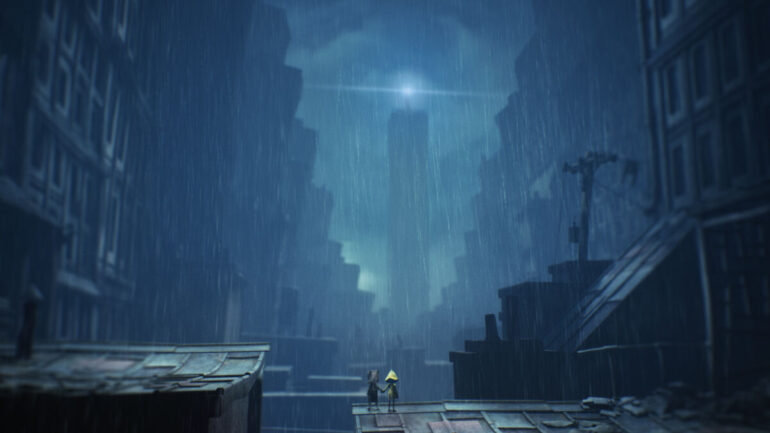 Little Nightmares 2 is a horror game developed by Tarsier Studios, where you play as Mono, a little boy with a brown paper sack on his head. Joining him is the protagonist of the first game, Six, identifiable by her bright yellow raincoat.

The two must traverse an ever-changing environment known as the Pale City, in which the player will have to avoid serial killers, porcelain dolls, and detached ceramic hands that will swarm Mono. But, despite the dangers, you must make it through the world to find the source of the transmission.

The first Little Nightmares took place in an eerie setting known as the Maw, a terrifying ship resort where grotesque guests feasted on the flesh of children. The Little Nightmares series also hosts a comic book and a mobile game for you to enjoy.

If you’re looking for more games like Little Nightmares 2, here are five other games that will make any horror fan jump in fright and squeal in delight.

Inside and Limbo by Playdead are much like Little Nightmares 2, and they are well known for their surrealist take on the horror genre. Both take the player through unsettling worlds where their only option is to flee or hide.

Limbo coerces the player through a monochrome landscape through the eyes of a boy as he searches for his lost sister in a world where he is at the bottom of the food chain. Around the boy are insects that can kill him with one limb, and that’s if the nightmarish environment doesn’t get him first. To survive, the boy must navigate puzzles and use platforms to make it to the end of the game with his body intact.

Inside follows a similar format to Limbo, in that the player controls a boy trying to escape from a world that wants him dead. But, rather than supernatural foes, Inside is based on the cruelty of humans. You have to avoid trained guard dogs that want you dead and stalkers that will hound you throughout the night. Use your wits to avoid detection and hide wherever you can as you try to escape your pursuers.

In both games, you’ll have more questions than answers and must use the environment to succeed. But you will die, or who knows? Maybe you’re already dead.

Thomas has been having night terrors, but when he wakes up from his latest one, he finds himself in a dreamlike state. Only this time, he’s free to act as he sees fit, but what lurks in his mind may want him dead too. In Neverending Nightmares by Infinitap Games, the player must explore a dream world and avoid the dangers plaguing Thomas’s mind.

As a side-scroller like Little Nightmares 2, explore a sketchbook-like house filled with broken glass, a ghoulish girl with bleeding eyes, and sounds that will make you paranoid every step of the way.

Designed after the developer’s struggles with depression, OCD, and paranoia, Neverending Nightmares will take the player through a surreal experience that will leave them questioning their every move.

Among the Sleep by Krillbite Studio is shown through a child’s eyes, just like Little Nightmares, and that perspective is undoubtedly terrifying. In a world that’s so much bigger than you, the only comfort a two-year-old child has is their ever-present teddy bear. Nevermind their eyes, because right now you have much, much bigger things to be afraid of.

Brave a home submerged in darkness as you try to avoid twisted monsters, be forced to hide behind crates and floors, duck beneath bushes and hide in the grass as you desperately try to find safety in the loving arms of your parents. But the danger is real, and you and vastly unprepared. No weapons, no armor, just a two-year-old with a teddy bear in the arms as they navigate an environment twisted by imagination.

Among the Sleep will make a player dread not just the dangers of the child’s home, but of how the story will be resolved. A mother is gone, and her child is suffering. The player is left to ask: Will there be a happy ending?

Fair warning, this experience is truly not for the faint of heart. Developed by Killmonday Games, Fran Bow will take you to a place only found in dreams, or, much like Mono and Six’s experience, more like a nightmare.

Play the role of Fran, a young girl who’s lost both of her parents, and now her only friend is a black cat called Mr. Midnight. But, as if that wasn’t bad enough, the trauma and shock of losing her family have caused Fran to be shipped to a mental asylum in the 1940s, where electroshock therapy was as common as lobotomy. Before that can happen, Fran decides to take a chance and embark on her own to her last living relative. The only problem? Before she can leave, she must first escape. And worse, reality seems to be shifting, and what’s real and what isn’t is a matter of debate.

In this psychological horror game, interact with the environment and try to find the solutions to puzzles in a point-and-click adventure that will leave the player questioning if what they’re seeing is real.

It was a boring history lesson at first, so much so that a young man, Wei Chung Ting, decided to take a nap. But when he wakes up, the school has become dyed in blood red, and there’s a message scribbled in black ink on the wall: “Typhoon Warning.” In an attempt to beat the downpour, he rushes through the school, only to meet another student, Fang Ray Shin. They decide to leave together, only for them to wind up back at school.

And then Chung dies, leaving Ray alone. Not only that, but ghostly creatures. the Lingered, are lurking around the school, and now Fang must find a way out of the school while the world turns into a hellscape. Like Six from Little Nightmares, as Ray you must plan your steps carefully and avoid alerting the creatures that roam the school. Otherwise, this terror will never end.

Explore the history of the school while avoiding creatures that can hear you breathe, make sense of the cryptic warnings left behind, and, most of all, try to escape with what sanity you have. But, much like Little Nightmares, the last challenge may be the hardest of all.

READ NEXT: 10 Games Like Escape From Tarkov You Should Check Out