Frostpunk (PC) REVIEW – I Did My Best 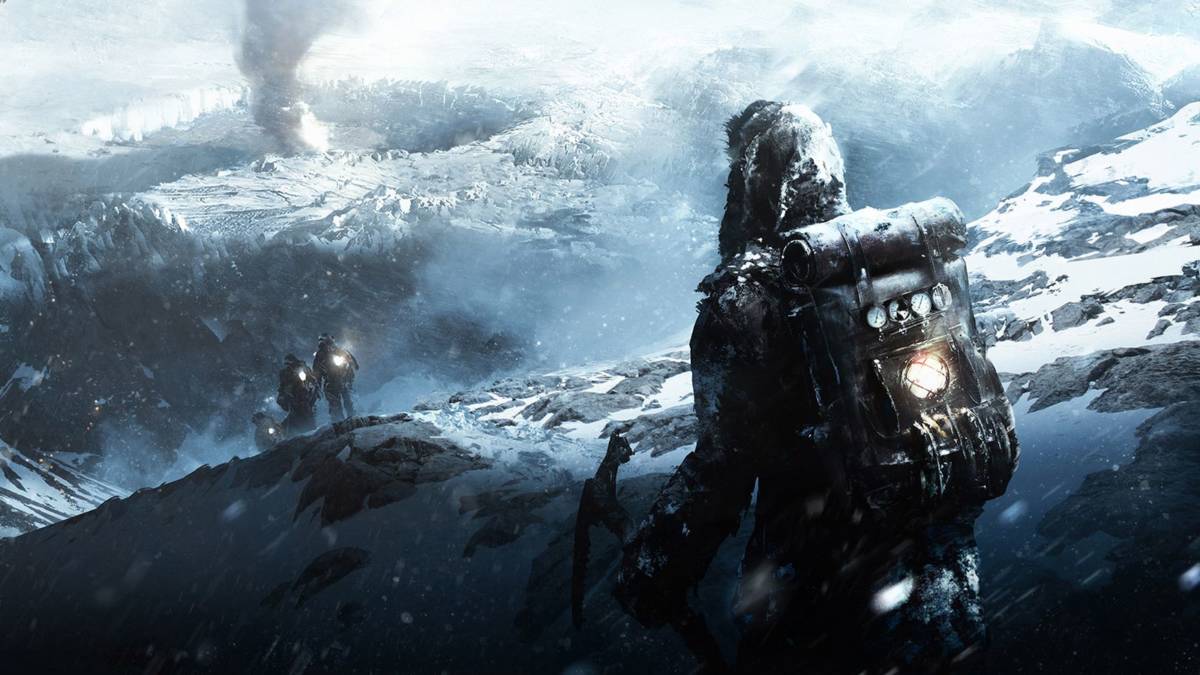 I did my best. No matter how many times I failed during Frostpunk, that’s what I kept repeating to myself. Sure, I somehow enacted a totalitarian state, had my enemies executed, and watched on as the common folk froze to death in their tents, but I couldn’t have done anything differently. Or so I told myself.

Frostpunk is a game that asks plenty of questions, which shouldn’t be a surprise as it’s the newest game from the guys behind the also challenging This War of Mine. When the world is plunged into freezing chaos after a natural disaster in the 19th century, the remnants of humanity make their way to the only hope left: gigantic heat generators designed to sustain life. 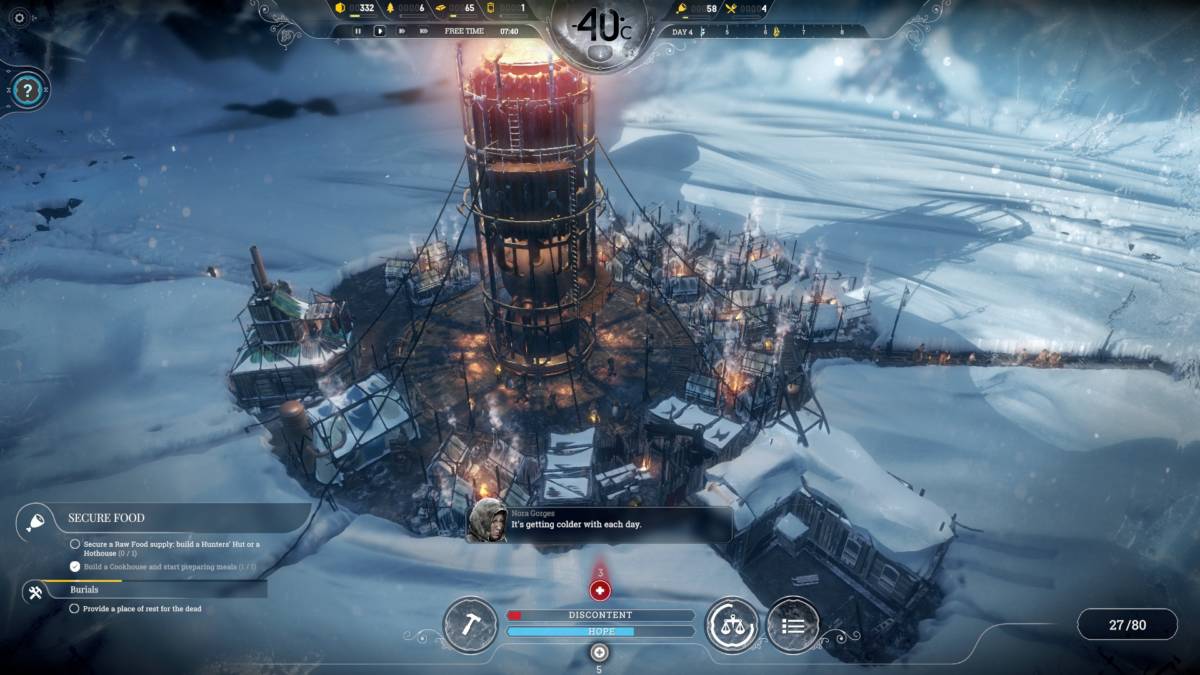 Once you arrive at your hollowed out crater, it’s time to oversee a society and help them to prosper, or to shape it in your own image and desires. Frostpunk seems to rather deliberately nudge the player towards grasping total power, which is surely a statement on how corrupting power actually is. It worked: after a few hours, I no longer even winced when the frostbite set in and the numbers dropped like flies.

The main meat of your time with Frostpunk will be spent trying (sometimes desperately) to keep the generator running. As each new scenario begins, you have a fair amount of workers and engineers at your disposal, who can gather finite resources scattered around the ground. Eventually, however, you will need to spend time on improving your technology to include mines, thumpers, and even machines that can extract materials from the walls of your crater. As well as coal to keep the fires burning, you will need wood for construction, steel for more advanced construction, and steam cores for the biggest game-changers, which are seldom easily available. 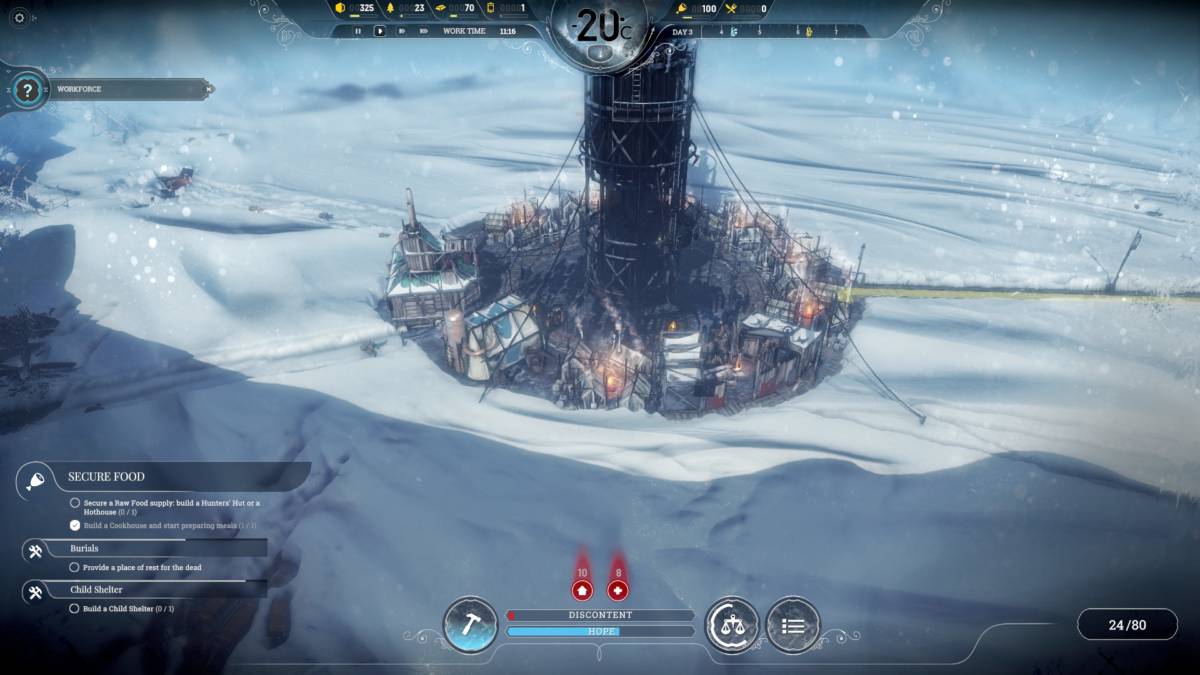 These steam cores allow you to create an evergreen food supply through hothouses, factories to provide prostheses for the frostbitten, and, most impressively, gigantic robot spider things last seen in 1999’s Wild Wild West. They can perform most of the tasks that your normal workers can just as effectively if not more so with one very worthwhile bonus: they don’t complain.

While I can empathise with the plight of the people in Frostpunk, they are incredibly difficult to please. The game brews discontent by having them constantly be in need of something, whether it’s food, warmth, or for you to stop making children do laborious work. It’s the end of the world and everyone needs to pitch in, I say. 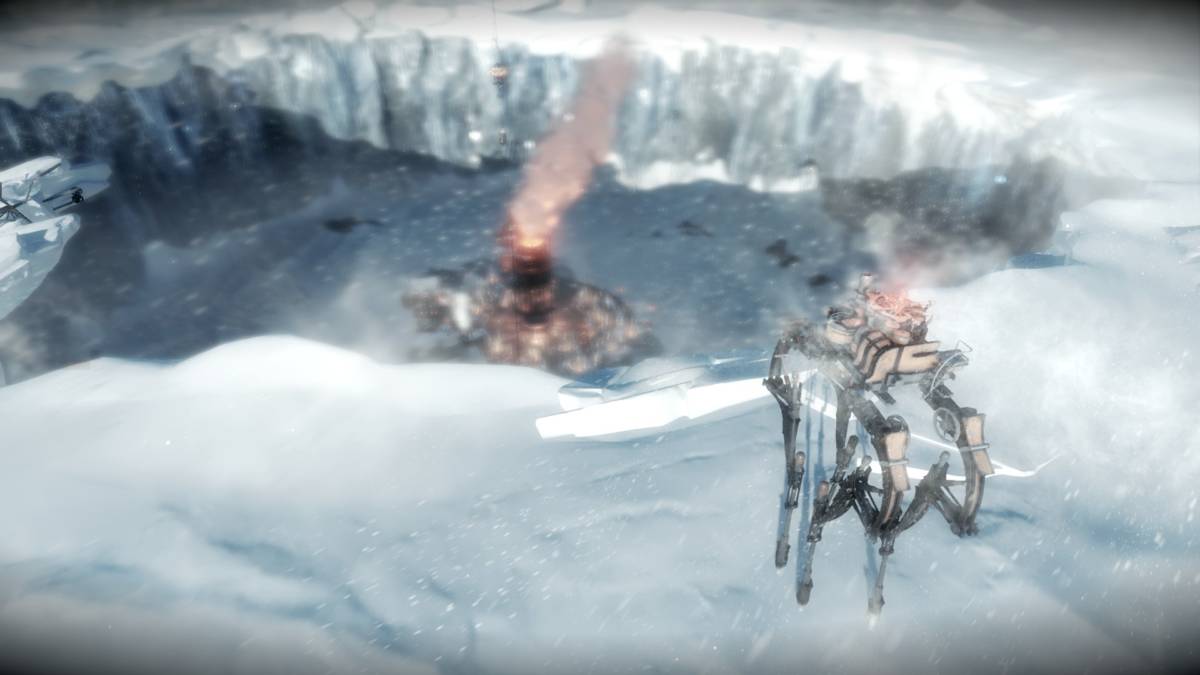 Frostpunk gives you many choices through its Book of Laws mechanic, which can either turn you into a saviour or a sinner. Early on, it will ask you if you want to build a cemetery for the dead or to pitch up a tent and bury bodies in the ceaseless snow. Electing to erect a cemetery will raise hope and open up new branches for similarly boosting laws, whereas chucking your citizens in open graves will cause everyone to, somewhat understandably, be upset. If they thought that was bad, they should see what your next decisions could be — soil is difficult to find in a snowy apocalypse, let’s just say that.

The first “chapter” of the Book of Laws is Adaptation, in which the main goal is to set your priorities down and build towards the future. It’s the next chapter, however, where things become really interesting. With Faith, you can effectively either build a pleasant, god-fearing community or, well, a cult that whips dissenters in the streets. With the Order line, you can either keep a well-policed and moderate society or one that is effectively Nazi Germany. 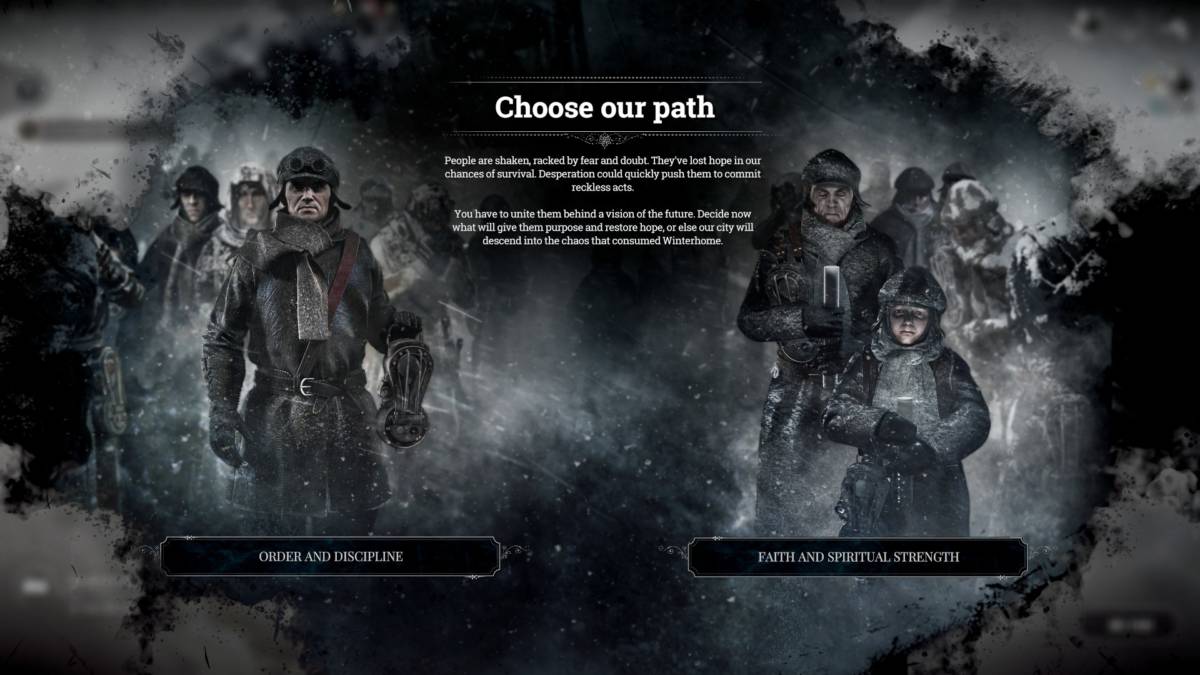 Attempting to appease your society is incredibly engaging, especially as it hinges so much on your continued existence. You need to be wary of Hope and Discontent at all times, lest you suffer the consequences. If your society loses all hope (i.e. all the working children die), you will be banished from the city and left to the cold. Should Discontent rise too high (i.e. a rebel group have had enough of you being Hitler), they will execute you.

This pressure to succeed manifests often throughout Frostpunk, so much so that I couldn’t stop playing for hours and hours at a time. Frostpunk is a timesink as hours of gameplay simply just disappear without you even noticing. I was completely enraptured by it, often finding myself vocally berating my people through the screen for having the temerity to die or to fall sick — quite worrying, really. 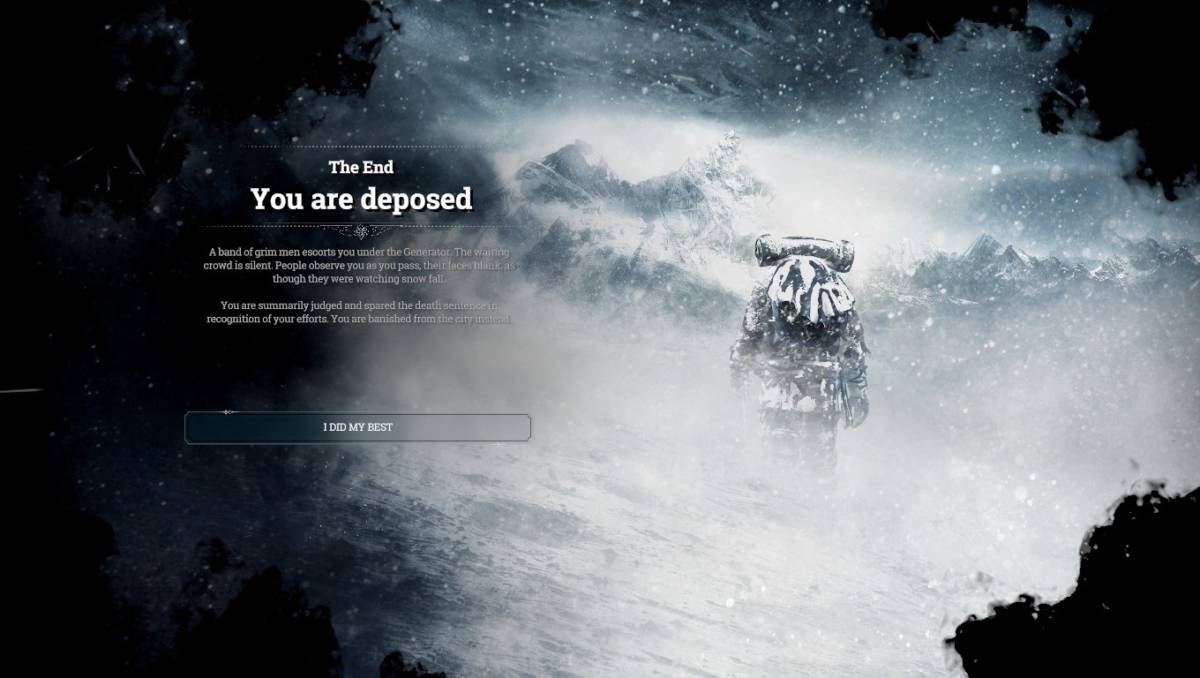 Perhaps I wouldn’t be so agitated if the the weather wasn’t so omnipotent, a constant boss battle that you always seem to be losing. Things start off fairly manageable at around -20°C, which your workforce can potter around in without much fuss. It’s when it gets to around -50°C that the pressures begins to become unbearable. All of your best laid plans go to pot with your workforce completely devastated as you overlooked some essentials, leaving your city temporarily in ruins with nothing functioning until it warms back up again.

I’ve even seen the temperature drop as low as -100°C in Frostpunk as the storms close in and the final scraps of humanity hang on by a thread. You are given ample time to gather as many resources as you can to outlast the weather by hunkering down and waiting it out, but it’s difficult to balance everything perfectly. Your citizens don’t seem to understand that, yes, you’re a dictator, but we also need to ignore that for a bit while we get our wood together. Moments of optimism are fleeting in Frostpunk, so treasure them. It’s a slog that you will likely enjoy through gritted teeth.

Where Frostpunk differentiates itself from other city-builders is that it is actually rather linear. Sure, you can shape the ideals of your people and their numbers, but the experience is by and large a scripted ones. Throughout different days, temperatures will rise, people will respond with the same concerns, and events will be triggered that require you to complete missions. For instance, during one of my playthroughs, a fractured group wanted to move to London after the panic set in, so it was up to me to try to change their mind.

Frostpunk, in its current state, is playable in three different scenarios. A New Home is the main story of the game and sees you trying to foster a society and protect it against itself and an incoming deadly storm. This is pitched as the main hook of the game, but both of the other scenarios on offer were more appealing to me. Perhaps it was from having to repeatedly complete the same objectives over and over again and backtracking after repeated crashes while playing A New Home, however. 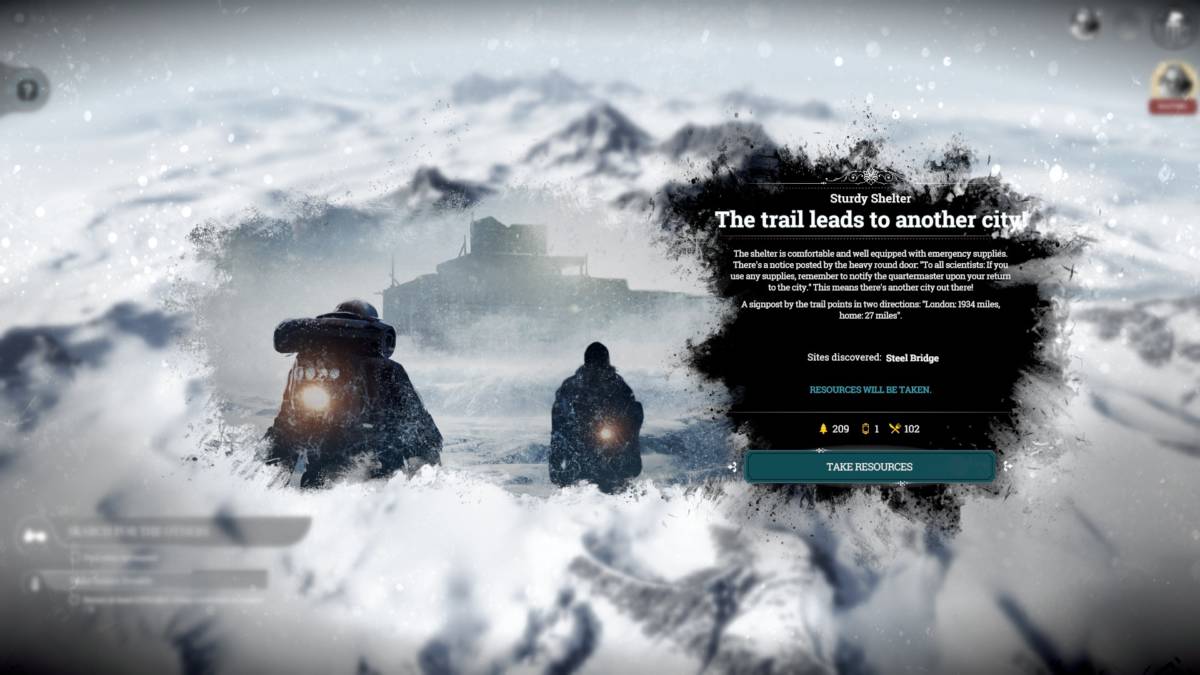 The Arks asks you to to keep seedlings safe from frost, which means keeping them heated whenever the weather drops as dramatically as it tends to. Through a combination of steam hubs, heaters, generator upgrades, and a whole bunch of automatons, you can ensure their safety and their usefulness for future generations. Meanwhile, The Refugees arguably gives you the biggest dilemma in all of Frostpunk: can you welcome every single new group of people in and keep them fed and warm? It’s exacerbated later on when former members of high society turn up at your door. Should you seek revenge on the upper classes of old and cast them out, or do you allow them to find redemption within your sanctum?

As good as these scenarios are, Frostpunk is missing a very important ingredient: free-play. 11-bit Studios understandably want to put the narrative front and center for the game, but they are risking the game’s longevity by not allowing miserable playgrounds to be created and developed. There are sliders already in place to customise your scenarios, so surely there should be the function to let the player go wild and carve out an existence for as long as they possibly can? A fourth scenario is yet to be announced, so it may just be that. 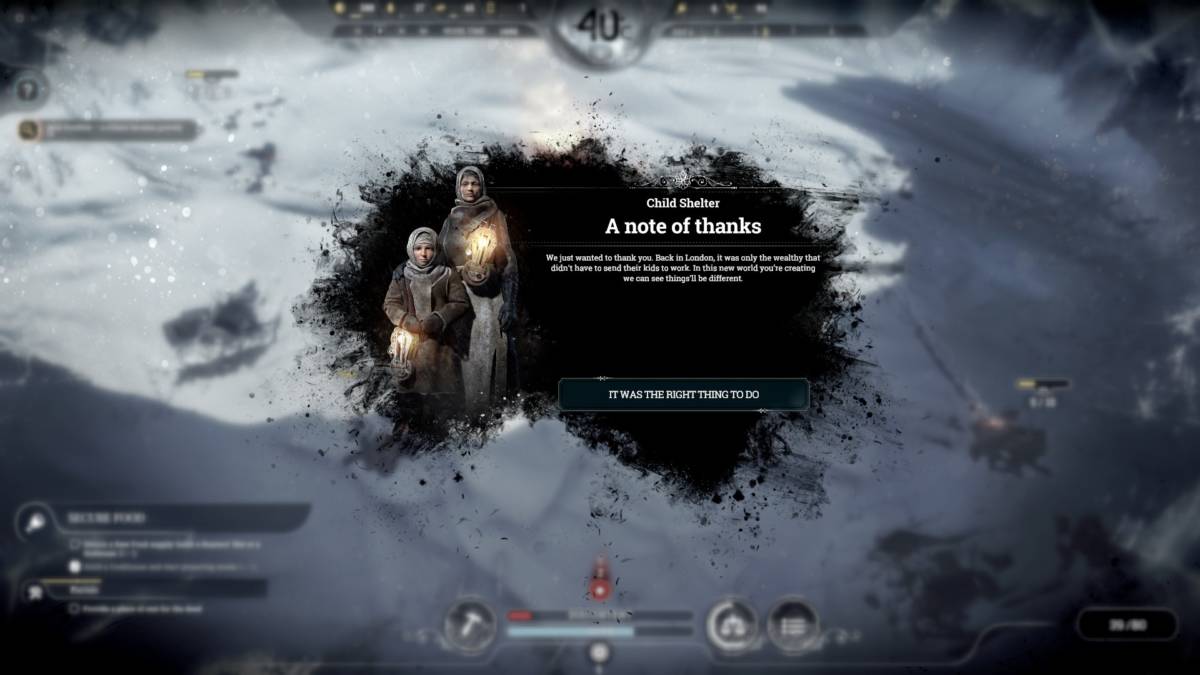 A lack of free-play isn’t the only thing holding the game back, however. As mentioned, it isn’t entirely stable at this point in time with repeated crashes on my end. My rig, a 1060 with 16GB of RAM, isn’t superpowered by any means, but it should be more than enough to run the game relatively comfortably on medium settings. The crashes have eased up, though they still happen on occasion. Something to consider if you’re trying to run Frostpunk at max settings; it doesn’t seem entirely optimised to be running at its absolute best right now.

There are a few other quibbles, too, such as the perspective. It’s an odd one in that you can’t rotate the camera, instead just zooming in and out on your city. While this is mostly fine, it means trying to select anything behind your generator is finicky at best. Frostpunk also feels mercilessly unfair at times, like all of the bad things just dogpile on at once without even giving you a chance to breathe. It makes sense, though: humanity kinda sucks as a whole. It’s just a question of how deep in the mire you want to descend with some almost unthinkable decisions before you can’t come up for air.

Frostpunk is a beautiful game that doesn’t shy away from the ugliness of our species, nor does it pull any punches with its difficulty. It’s an uncompromising, completely captivating affair that shouldn’t be overlooked as one of April’s best new games.

Verdict
While not without some faults and limitations, Frostpunk is an often harrowing parable on society that makes you the monster without you even realising it. Microtransactions: none
8.5