Carrion is a short but undeniably fun reverse horror with plenty of clever ideas that will have you second-guessing meatballs. 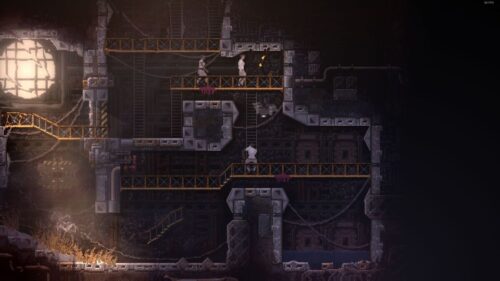 I don’t think I’ll ever be able to look at mince in the same way ever again after chomping my way through Carrion, the reverse horror game developed by Phobia Game Studio and published by Devolver Digital. Playing as a red mass of death that grows even more grotesque following every bite of hapless human, your job is to help it escape, one torn limb and shrieking scientist at a time.

The Carrion Beast isn’t your average video game protagonist, that’s for sure. While games like Dead By Daylight have you playing as the bad guy, few have you causing as much chaos as Carrion — and even fewer are this fun. There might be a slight pang of guilt early on as you ragdoll scientists around and chuck their legs at their mates, but that subsides pretty quickly. You will likely relish stalking from the shadows the more horrifying a beast you become.

No monster is complete without at least a few powers, of course. The Carrion Beast starts off as a little meatball that can use its tendrils to snatch up humans with more powers unlocking along the way, helping you to combat the increasingly beleaguered and desperate forces the shadowy organisation you’re facing throws at you. Before the credits roll, you will be able to take over the bodies of soldiers, harden your exterior against explosives, and send out a hail of spiked tendrils to eviscerate everything in your way.

The game does a great job of doling these out to you over time, the Carrion Beast slithering into radioactive vats and emerging with a strange new power on a fairly regular basis. They all work towards making you feel like malevolent meat that’s borderline unstoppable, which can feel worryingly empowering. How you tackle most enemies is up to you, whether you want to come screeching in, tendrils flailing and heads a-falling, or stalk humans from the shadows, picking them off one at a time and making guttural noises to unnerve them. You are The Thing and these are your playthings.

It wouldn’t be much of a challenge if all your captors cowered from you, though, so Carrion chucks a couple of irritating enemies at you to stop your mindless fun. Soldiers with shields prevent you from confronting them head on, meaning that you have to get creative. One of my favourite tricks was to pick up something like a server and then drop it on top of them, or use their friend’s corpse to chuck them off-balance and then go in for the kill. A giant robot piloted by a soldier has to be picked apart over time as they will tear Carrion Beast to shreds very quickly if you aren’t careful, so there’s a surprising amount of tactical thinking to the carnage here.

When you take a significant amount of damage, you will devolve back into a weaker, smaller version with each form of the Carrion Beast having its own unique abilities. The smallest form can turn briefly invisible, helping you to avoid laser fences and tricky enemies. The middle form can rush forward and break obstacles or squads of enemies, while the biggest Beast can shoot out tendrils in all directions to wipe out opposition and clear a path.

Away from the regular death sprees, Carrion changes the pace with some small environmental puzzles that typically ask you to deposit your biomass to use form-specific abilities. Certain levers can only be accessed by shooting a cobweb through a tight gap, but then you may have to break an obstacle with a charge, meaning that you have to go back and retrieve the biomass. Carrion also often keeps you on your toes by not allowing you to return to full biomass after finishing a puzzle and progressing into the next room full of enemies, which makes you utilise the full spectrum of powers without solely depending on the most powerful ones. That’s smart design, something that is evidenced throughout Carrion’s dark corridors and increasingly unethical locales.

Progress is determined by spreading enough of your biomass in specific locations to eventually break open a “vault” to the next section. There’s no mini-map to help you navigate, the only directional hint coming when you roar and hear something roaring right back at you. While this does take a bit of getting used to, especially as most of the areas are industrial and the path forward isn’t always that obvious, Carrion asks you to backtrack to previous areas to utilise new powers you’ve picked up, so you will be acclimated with the ins and outs of every slaughtering ground before long.

Simply slithering around shows off the game’s attention to detail, Carrion Beast’s mass brilliantly animated depending on what you’re trying to squeeze through. Taking a route through a narrow passage will stretch it out, each “meat section” (what a phrase) reacting to the change. Praise also has to be given to the audio design, the noise of Carrion Beast scuttling around likely to trigger any arachnophobes, though the phenomenal score is what really makes the slaughter feel cinematic, like you’re embodying a big screen monster hunting down the who’s who of genre tropes.

Like most horror movies, though, Carrion is quite the short ride. A fun, blood-soaked ride, but a short one all the same. It took me four and a half hours to dust off the story with the only incentive to go back being extra unlockable tendrils. It’s a shame, because the game doesn’t quite give you enough time to enjoy the Beast at the height of its terrifying powers, things wrapping up shortly after you take on its ultimate form. I would have loved some additional side content, like challenge rooms in which you have to wipe everyone out in a set amount of time, but the story is sadly your lot.

Speaking of story, those expecting much from Carrion will be left wanting. Small bits of background lore tie things together, but there’s not much of an over-arching narrative. There are some brief sections that change things up where you play as a human, though movement and progress feels sluggish and not at all interesting by comparison. A lot of love has been poured into bringing Carrion Beast to hideous life, not quite as much elsewhere.

Regardless, if it’s enjoyable slaughter with some smart ideas you’re after, Carrion will likely have you chuckling away maniacally for a jovially murderous afternoon. A must-play for horror fans who want to be the ones unleashing the scares for a change.

Verdict
Carrion is a lean but undeniably fun reverse horror with plenty of clever ideas that will have you second-guessing meatballs.
8