Fortnite Skins Are Being “Raffled” On eBay

The bizarre ecosystem around Fortnite skins takes an even weirder turn if you go over to eBay. 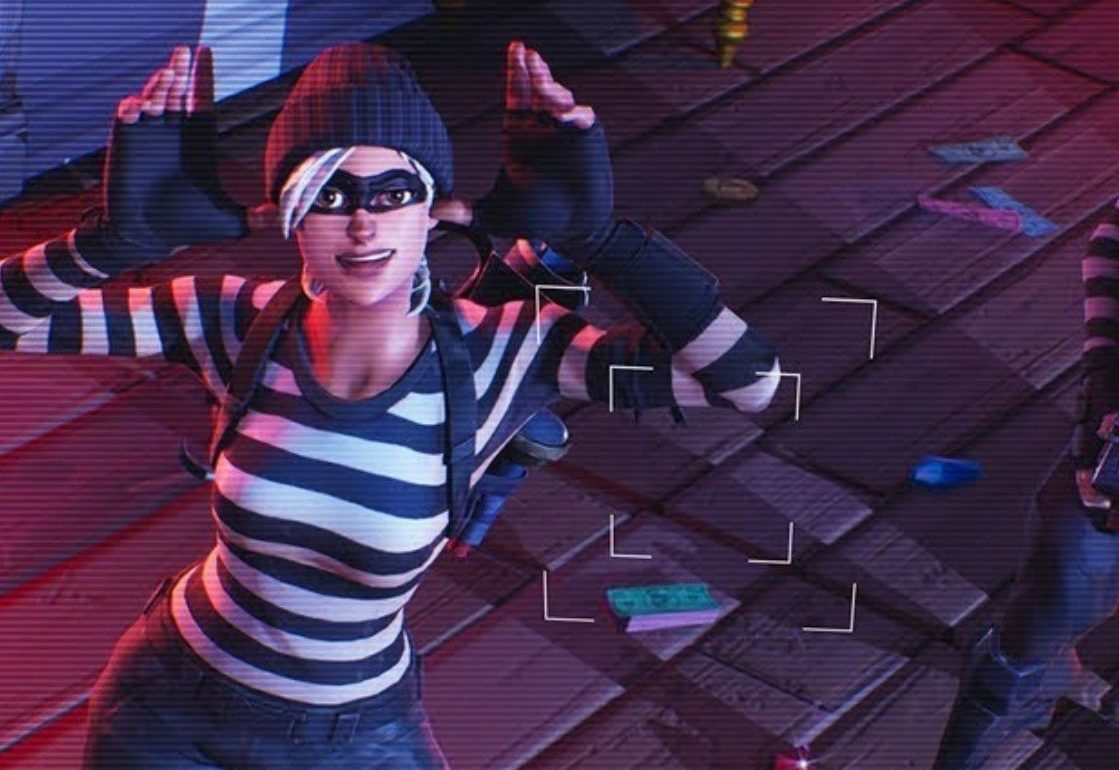 Home
Gaming
Fortnite Skins Are Being “Raffled” On eBay

Fortnite is 2018’s biggest game, a movement that has seeped into wider pop culture and doesn’t look like ending any time soon. What also doesn’t show any signs of abating –no matter how Epic clamp down on it– is scammers trying to earn a quick buck from Fortnite skins.

If you’re an outsider looking in when it comes to Fortnite, there’s an ecosystem and peculiar sense of stature in place that’s built around the game’s skins. These effectively change the player’s appearance while holding no gameplay advantage, though the psychological effect is up for debate. If you see a Renegade Raider running up to you, for instance, you know that that player must be experienced as it hasn’t been seen since the very early days of Fortnite: Battle Royale.

This sense of esteem is what many players think they need to impress or to just look different to everyone else in-game. However, there’s only a finite amount of chances to buy a skin with the in-game currency, V-bucks, which is earned through playing or from a real-life purchase, from the game’s Item Shop. Skull Trooper is the most infamous example of this: a pretty plain skin popularised by the streamer Myth which rose in status as it was previously only available in 2017 when many people had not jumped aboard the Fortnite bandwagon yet. Epic brought the skin back for this year’s Fortnitemares to the sound of weeping credit cards across the globe.

What if Epic never brings a skin you like back, or you just want a bigger haul of skins to add to your collection? Well, you could just get over it, or you could find more nefarious and potentially damaging means instead.

According to the TOS, players cannot trade/sell accounts with/to each other, neither can they (except for a trial period limited to stuff only in the Item Shop at that time) outright give each other items, but this has not stopped players from either swapping accounts for money or misleading others into thinking they can trade for money or social media exposure. If you’ve ever been on Fortnite’s Twitter account, you know it’s a hellhole of spam from which there is no escape. 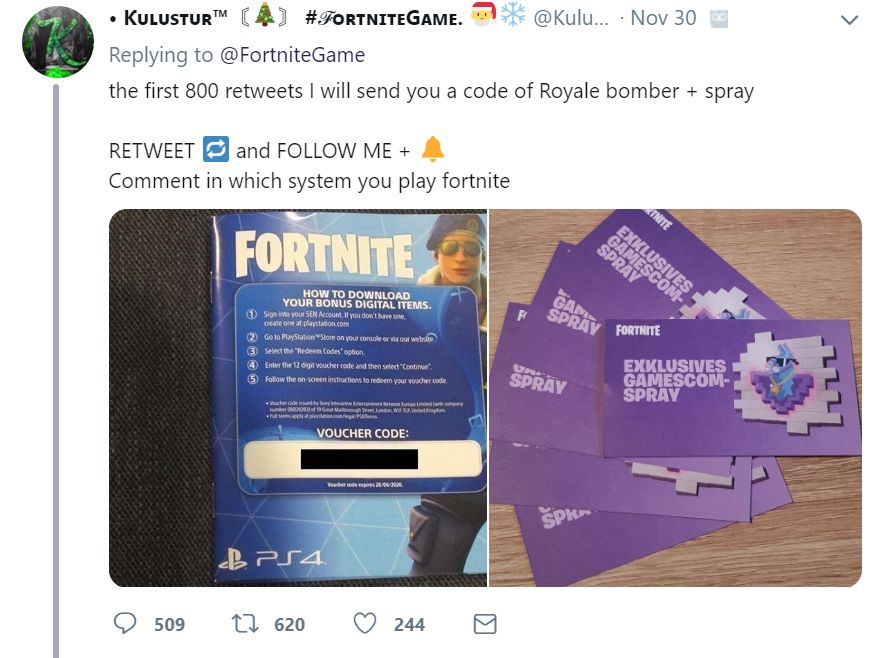 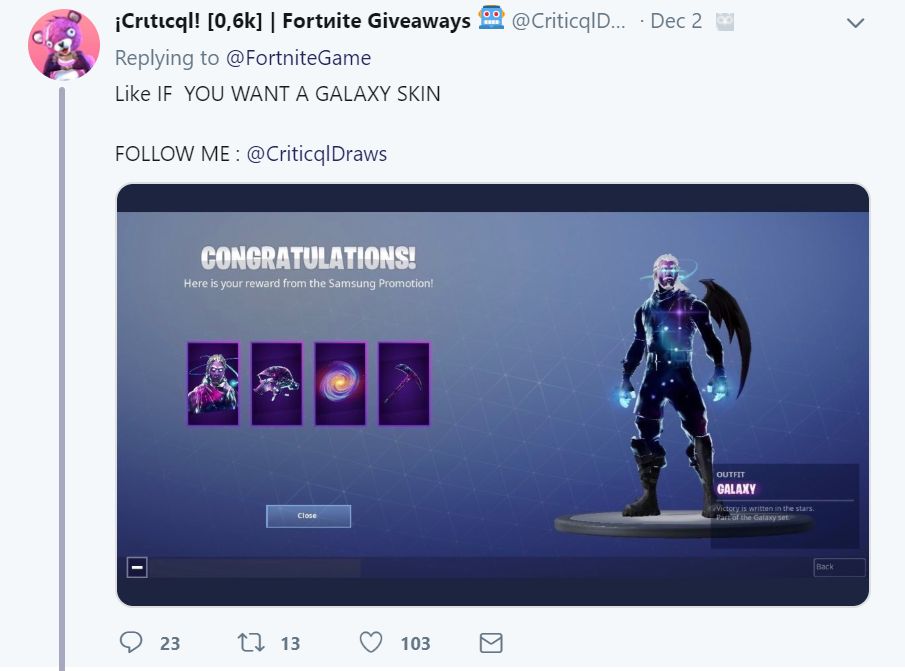 Asking for retweets is hardly a pandemic (though it is highly annoying), but the account trading has been an issue within Fortnite for the longest time, roughly ever since scammers realised the playerbase for the game contains a lot of naive children. Epic have done what they feasibly can to improve security with 2FA and constant warnings, but they cannot cure stupidity.

Fortnite skins being sold on eBay is nothing new; it was in the public eye as early as March when the exclusive (and not great) Twitch skins were being pawned off with alarming regularity. The way account selling works (or is supposed to) is that the seller will fork over their email and password for the account, which will then be “adopted” by the buyer. None of the buyer’s progress from another account can be carried over.

If you search “Fortnite skins” on eBay now, however, there does not seem to be much in the way of outright account selling at all. Something even less agreeable looks like it’s taken its place: raffles for Fortnite accounts, despite the fact that it’s against eBay’s TOS.

I couldn’t ascertain in my research exactly why the tactics for account selling had so drastically changed, but it makes sense if you’re wanting to scam or just earn as much money as you can. With there being no obligation of providing proof as you are “purchasing” a raffle ticket and therefore just a chance of winning the account, it’s a grey area that a lot of sellers are finding success in. This listing, for instance, has had 137 buyers at £1 a pop, meaning that the seller is currently sitting on £137 for a listing that they could technically just churn out again.

There are many different methods to the madness, so I decided to ask some of the sellers how exactly you’d go about winning a raffle and what proof would be provided. As you might expect, there was nothing that didn’t immediately leap out as suspicious.

So this is me raffling off my own account for £2 a ticket and the numbers will be drawn on the 2nd of December, I honestly don’t have any proof of the account other than screenshots, as I sold my PS4 to my old friend and drove it to their house yesterday, so I can only access the account via the app on my phone (hence why I have the screenshots ).

It’s understandable as to why you can’t trust it, but if you’re willing to take my word then please do so as it’s an incredibly OP account.

When asked about the lottery chances being 10% when there were more than 10 people involved and it not making much sense:

“its in the description. There’s an online random spinning wheel with 10 ‘slices’… one slice will be a ‘win’ and the other 9 will be ‘lose’ hence 10% chance of winning. Hope that makes sense :)”

My personal favourite, this one. I noticed that the description for one listing mentioned that the account had been “cracked” and so I asked for further info on what that entailed. The seller just outright told me that it had been stolen.

I’ve yet to find any evidence whatosever that any of these listings have led to the sales of the accounts themselves, but that’s because the sellers don’t need to provide any proof. Even more troubling is the brashness with which these sellers operate: who knows how many of these accounts have been taken from other players?

It should be obvious to anyone that something that breaches two separates terms of conditions should not be something that you put much trust in, and I’d wager that buying a raffle ticket is an even bigger scam than those that purported to be selling Skull Trooper skin for way under value just a few months back. The bottom line? Be happy with your default skin.