Fortnite: 5 Facts About The Island You Need To Know 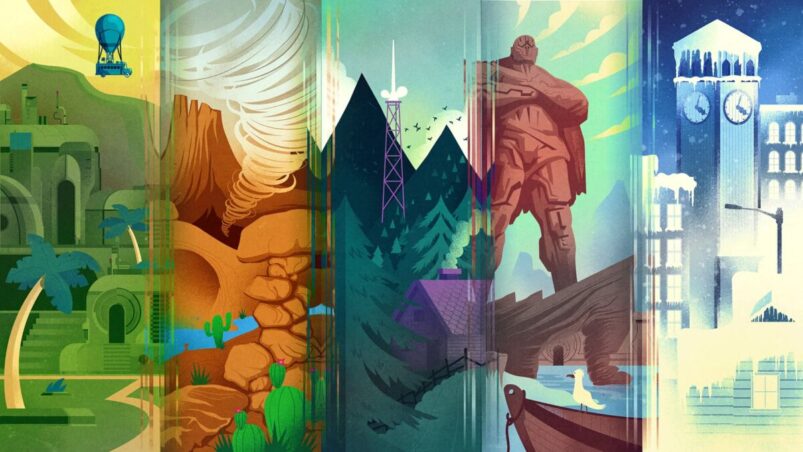 A place to drink mushroom juice from shady corporations, to do tricks in boats and cars, and most importantly, to be yourself. Fortnite: Battle Royale’s Island has had a rich history since its creation in 2017, with the gaming industry forever changed by its innovation. A free-to-play oasis that, outside of its regular building and shooting, belongs to the players.

Destructible environments and community-focused live events help shape the stage where Fortnite takes place. Not only is it malleable through gameplay, with gas cans burning buildings to the ground, but the players’ opinion is just as impactful.

Here are 5 facts from the Fortnite Island’s many years of worldbuilding.

Outside of Fortnite’s brutal gameplay, if a character is lucky enough to be the last one standing and in the exact center of the Storm, they are freed from fighting. Those circumstances are as rare as the chances of getting sent to the Island in the first place by the nefarious Imagined Order (IO). However, many have still managed this ordeal.

Glimpses of a civilization on the Island are sparse and usually revealed in summer events, serving as an explanation to how characters can be relaxing if all they do is fight to the death. The IO strips people of their memories and special abilities before throwing them into the Island’s Loop of battles, but if they manage to escape, all memories from before and after come flooding back.

As such, it’s very likely the society built in this battlefield helps heal the scars from those lucky enough to call it quits, as if they don’t have access to the mystical Zero Point, they’re stuck in there forever. With Bars propping up the economy,, businesses are made and people settle. Pizza and burgers are quite valued.

Some didn’t like this idea of life, and were fortunate enough to tip the scales in their favor by liberating and calibrating the Zero Point, still contained in the IO’s facilities under the Island — but going back home to their past life is nothing but a dream for most escapees.

On a brighter note, the Island and everything on it is beautiful. The countless flora and fauna from all over existence converging into this beautiful slice of hell is enhanced even further by the talent the so-called Loopers bring to it. And under that is an ecosystem that, although digital in reality, remains the most biodiverse in all realities.

2. It Was Developed Quickly

It’s no secret that the battle royale genre was a gigantic trend in 2017, with games finding success far quicker than usual thanks to this formula. Fortnite originally launched with its PvE campaign, Save the World, but as a response to the still-developing battle royale genre, Epic Games scrambled its teams for two months to develop the Island, and all the battling that would take place on it. In the gaming industry, two months for one of the biggest games of all time is certainly no ordinary feat.

There was plenty of thought put into every aspect of not only the mode itself, but the Island’s environments as well. Even though Fortnite takes great pride in its chokehold of players’ minds and wallets, there needed to be some fun and connection to the place that enabled it all. Points of Interest (POIs) quickly adapted to feedback, and some even rose to a legendary status, like Tilted Towers and Dusty Depot.

That affection from the community would have direct payoffs in the ongoing narrative, with Tilted Towers escaping meteors and Dusty Depot being torn apart by them. Recent iterations of the Island’s cities and gardens have yet to reach the same level of attention, but they will always matter the most to whoever joins the game at the time to see them standing. Fortnite is always evolving, but doesn’t shy away from some nostalgia every now and then.

3. A Tough Everything Sandwich

After Chapter 1 — Season X, the Island was gone. Only with the effort of The Seven — existence’s greatest heroes — did it come back to form, but now it had far more uncharted territory.

Previously, all that was shown was the Island surrounded by water and smaller pieces of itself, serving as the entire world of Fortnite. However, Chapter 2 introduced the concept of two Islands connected by the metal inside them. Season X caused a black hole that reorganized all of the atoms from the previous Island into something new, making them tough as bricks.

One of the leading theories of how the Island was made is accretion, that with every portal and manipulation of the Zero Point, the IO brought a residual amount of debris from the multiple realities they visited, causing dusty madness. And due to this soup of all existence, an everything sandwich was made in the form of the Island — and so was the toughest metal ever, the Chromium that composes it.

As previously mentioned, a black hole has had an impact on the Island. It was the result of a last-minute effort to defeat the kaiju known as The Devourer, who had his eyes on eating the Zero Point for the sake of survival. However, not only would the infinite energy kill him, but it would also destabilize and cause the black hole anyway.

Singularity, now revealed to be a member of the Seven, took matters into her own hands and cracked the Zero Point for an upper hand against the beast, resulting in a more controlled destabilization over the other option.

During this chaos, the IO manipulated the Island to their own parameters to ensure a clean slate that fit their plans, but so did the Seven. Each of the new sides were split between the two rivaling groups, the Seven’s presence completely unknown to the IO until Chapter 3. Now, after the IO’s defeat in Chapter 3 — Season 2, the Island is at peace.

5. Its Past Is Mysterious

Ever since its first season, Fortnite’s only hints at a man behind the curtain were bunkers spread throughout the Island. Indestructible and shut tight, these were later revealed to be access points to the IO’s underground complex, watching Loopers from afar.

But with Chapter 3 giving more depth to the battles beyond the Loop, having immeasurable stakes — the salvation of every world and being — The Foundation revealed there was a past unknown to the Loopers. Their memories are suppressed by the IO until their escape from the Loop, so any previous recollection of battles against them were completely wiped.

It doesn’t take much of a catch-up to be convinced to fight people holding you in captivity, though. The Seven have been saving Loopers since the group was formed, under the IO’s watch with their own Island in Chapter 2, and they will continue to protect them until their freedom can be had.

As Fortnite transitions to a future that includes the player as a key part of the big battles, with the most recent event, Collision, giving the ability to pilot a giant Mecha, it will also shed light on its iconic cast of characters and what led them to call the Island their home.