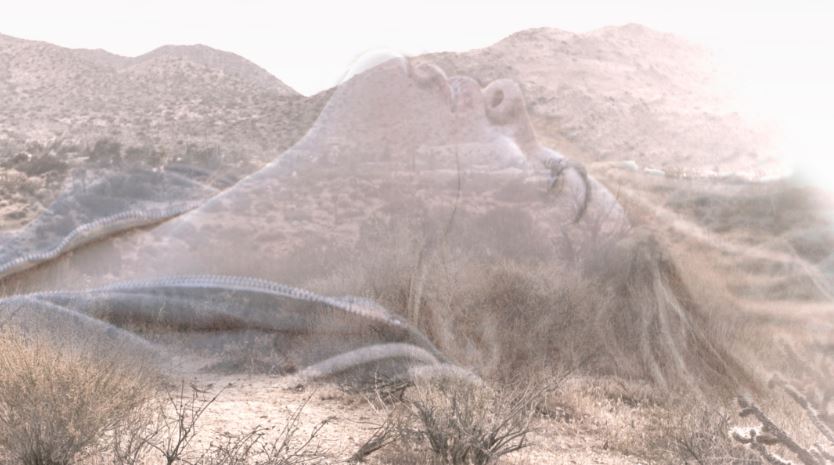 Written by Christopher James Lang and Amanda Todisco (who also stars in the film), and directed by Lang, Valley of Ditches is a low-budget thriller/horror film newly released for streaming or download. Although this is Lang’s first horror film, he’s an experienced director, having made two previous features, both of which were dramas. Lang does a good job here, especially considering this is his first foray into exploitation filmmaking.

The movie begins as Emilia (Todisco) asks her boyfriend, Michael (Jeremy Sless), “Are you afraid of dying?” as the camera stays tight on their faces and bodies. The conversation isn’t deep or anything. These are people in their late teens or early twenties asking very basic questions with very basic answers. And anyway, it’s hard to intellectualize a question like this. You learn the answer through experience. And Emilia is about to have that experience.

The film is about as minimal as you can get: three main actors, a desert, a stranger digging a grave as a captive young woman looks on. An intriguing premise, for sure, but the movie very much wants to be more tense than it turns out to be. A big problem is the music. Khris Clymer’s score is great, very minimalist. Mostly piano with keyboards and an occasional guitar thrown in. But sometimes it’s so good that it becomes distracting, undercutting Emilia’s suffering. Some of the more harrowing scenes would have been better without any music at all. With the music included, these scenes become impressionistic, artsy, which takes away some of the punch. The impressionistic stuff works fine during the flashback sequences and when we get a glimpse into Emilia’s unconscious mind, but it can really dull what might otherwise be very brutal, visceral scenes.

The acting is pretty damn good all around. Russell Bradley Fenton is perfect as the antagonist, Sean. He’s rather androgynous looking and clay-faced and somehow this adds to the character’s menace. And he really does a great job of getting that “nothing behind the eyes” look of a complete sociopath. Jeremy Sless doesn’t have much screentime as Emilia’s boyfriend, but he does a fine job, especially during his one pivotal scene. His performance is quite restrained. Amanda Todisco also delivers a nicely understated performance. In lesser hands, the kidnapped girl thing could have gotten way too over-the-top. Scream queen territory. But Todisco doesn’t give in to B-movie temptation and dials it back a notch, making Emilia’s fear and bravery seem that much more real.

The wide open desert gives you a sense that there really is nowhere for this character to escape. The landscape is beautiful, which can actually distract from the story sometimes. It might not have hurt for the colors to have been a bit more muted, less sunny. A little more grey. However, other viewers might not have this problem. I’m one of those people who possibly finds too much beauty in desolation.

Viewers will either buy the killer’s motivation or not. Same with the attempt at a twist ending, which you can kind of see coming. The character motivations worked well enough for me, though I was scratching my head a bit at first. But some sort of explanation for the kidnapper’s actions was definitely needed in order for the movie to stay well above becoming torture porn, which it is definitely not. Actually, going into Valley of Ditches, I was concerned that the conceit of one man, one woman, one shovel might not be enough for a feature-length movie and that the runtime would eventually be artificially stretched. I was glad to see that I was wrong. Valley of Ditches is a very good exploitation film that gets this close to being great. And it was made by passionate people working with a 35,000 dollar budget. In 2017 money, that’s worth just about a Snickers and a smile. So good on Christopher James Lang and his cast and crew for making it work.