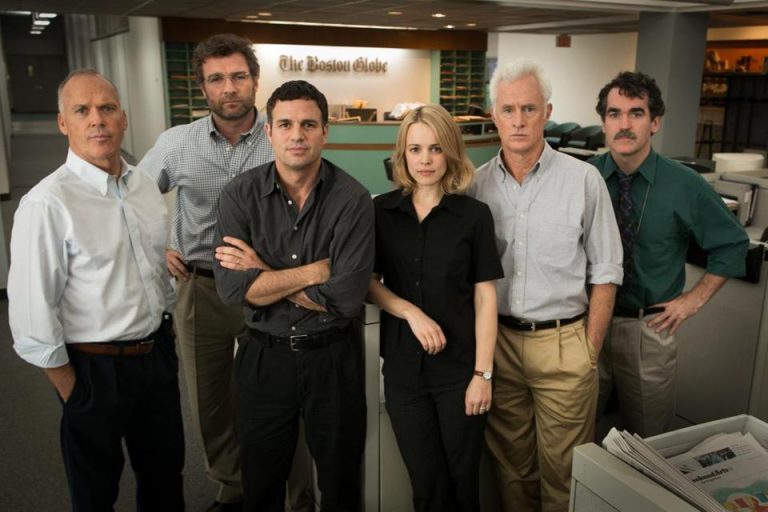 That’s the saying nowadays. Thanks to so called ‘Citizen Journalism’, every Tom, Dick and Harry with a mobile phone who luckily happens to be at the right place at the right time, is now unofficially considered the first reporter on the scene. We wake up in the morning, log on to our computers and observe the news of horrifying, global events on YouTube and Facebook pages. Bloggers, Vloggers and Podcasters are now the first port of call for the consumption of information by many of the apparent ‘YouTube Generation’.

These aren’t true journalists. They lack the education, the experience and the lifelong lesson of knowing right from wrong. Ultimate truth and the fine art of vetting and fact checking is no longer priority. It has been buried by the addiction of immediacy and the thrill of entertainment.

It appears we have forgotten the true meaning and nature of journalism but thankfully, Tom McCarthy’s Spotlight is here to remind us all.

Coming off the back of 2007’s wonderfully charming, The Station Agent and the, let’s-not-talk-about-it, The Cobbler (2014), director Tom McCarthy brings us his gripping low-key thriller Spotlight. A film that made waves in the US last year and arguably one of the most important releases of 2015 has finally landed in Blighty.

Following the true story of the Boston Globe’s Spotlight team, a crew of four members (Keaton, Ruffalo, McAdams, James) who specialise in tackling long-gestating, highly expensive yet pivotal stories, who find themselves suddenly investigating their biggest story to date: the Catholic Church’s long running and systematic cover up of child abuse by priests, not just in Boston but around the world.

In an age where print media finds itself on its last legs, admirably fighting the impossible, like David against the towering Goliath, it’s important we remember its importance. Its value. The way it has shaped the world we live in because soon our grandchildren will look at newspapers the same way we look back on fossilised tools once used by Neanderthals. Spotlight could not be more relevant than it is today. Yes, it may be set over a decade ago, but you need time to digest issues and events of such gravity. Time to find a certain sense of closure or at least an understanding of the monumental happenings (a lesson painfully learned by The Fifth Estate and Oliver Stone’s’ W).

The story of Spotlight should be a simple. It should be black and white. It SHOULD be good versus evil. Yet, somehow the world of Spotlight, very much like our own, is shrouded in shades of grey. Faith in humanity and common decency are tested when revelations that it wasn’t just the Church who swept this scandal under the rug but Boston’s very own community. Mothers, fathers, friends and loved ones, people like you and I, all concealing the gruesome truth in some sordid way of defending their Church, city and family. The odds are stacked against our would be righteous crusaders as it appear it is Spotlight against the world, with the team having to hurdle each bureaucratic barrier put before them. The city of Boston itself evokes a sort of mismatched and uneasy transition from the historic, complex and architecturally stunning Catholic Church buildings to the conservative and dated tower blocks of a 1970s metropolitan nightmare.

“Our heroes don’t battle one ultimate villain with a gun, they battle copious amount of paperwork with a ruler.”

The film shines a light on the true nature of real reporting and the real, everyday folk who work hard to uncover these stories. People who process information, scrupulously research it, meticulously substantiate their findings and have their moral compasses in check. This is not a fast paced, visceral, adrenaline-pumping thriller, in fact the first half admittedly drags. You will find no scenes in which our hero narrowly escapes with his life each time the bad guys try to get him out of the picture in hopes of ensuring the truth stays buried. Our heroes don’t battle one ultimate villain with a gun, they battle copious amount of paperwork with a ruler against a backdrop of drab, colourless office settings with sickly synthetic lighting all whist wearing dull, creased shirts and ties. They tirelessly sit at their desks and work around the clock, neglecting their social lives, wives and children. It becomes an addiction for them, their passion to expose the truth slowly turning into seething hate and anger, anger at the system and themselves for failing to pick up on any of the signs for so long.

One of the most tense and spilling chilling scenes sees Rachel McAdams’s character calmly and casually confront one of the very priests who are at heart of this enquiry. On his doorstep, asking him if he has ever molested a child, expecting some pitiful and bogus excuse, only to be wrong footed.  He coolly announces with a homely smile on his faces, “yes, I have”, which, in turn, is subsequently followed by an odd and disturbing justification for his perverse actions, seemingly implying the true reach and result of the church’s control and handling over these matters.

McCarthy’s film simultaneously holds up a mirror to our own world and a portal to another. It’s a quiet and reserved take that handles the subject matter not only with confidence but maturity and absolute sensitivity. The film is almost a polar-opposite of another Oscar contender this year, The Revenant. While that film, directed by Alejandro Gonzalez Inarritu, featured staggering, visceral imagery and some bold filmmaking. It lacked much below its admittedly gorgeous and breathtaking surface. Spotlight, however, has the opposite problem. The film is bustling with gripping and poignant themes. It features intriguing well-rounded and believably grounded characters, yet its visual prowess and sophistication leaves much to be desired.

McCarthy’s direction, whilst commendably restrained rather than overpowering proceedings, can’t seem to gel with the sheer aptitude of the stellar on screen talent and the dialogue they deliver. It feels as the direction is chasing the film than commanding it. There’s a difference between minimalism and simplicity.

Spotlight is shot so simply and without much dynamism, you are left feeling the film would have benefited from a more interesting directorial take. I found myself counting the number of scenes that featured bog standard and uninspired shooting pattern. Wide shot. Shot reverse shot, shot reverse, rinse and repeat. Its visual language lacked weight and potency. It all felt very televisual. The film felt more static that it should have, the tension was coming from the actors not the filmmaking. While I understand McCarthy was allowing the actors to ‘act’ and attempting not to interfere with that process, the filmmaking form should tell a visual story as well and not leave all to the dialogue.

This film is the epitome of an ensemble cast – there’s no true leading figure. The team itself serves as the story’s protagonist, digging out the disgusting and rotting underbelly of the Boston they never knew existed. Films such as Spotlight often attract household names as a result of an actor’s hope of winning that shiny golden idol by virtue of a teary-eyed, scenery-chewing monologue in anticipation of catching the attention Academy voters. If you excuse one well-earned outburst from Mark Ruffalo’s Mike Rezendes over the absurdity of events, Spotlight isn’t a film of virtuous men and woman shouting righteous speeches. This is a film of glances, of whispers in ears, of having a civilised conversation and glass of beer with an uncivilised character in desperation of finding out the ultimate truth.

Whether you are religious or not, Spotlight will force you to think of answers to question you never wanted to think about.