Fantasy Strike (Switch) REVIEW – And Fireballs For All

A well-rounded package that has something for everyone. 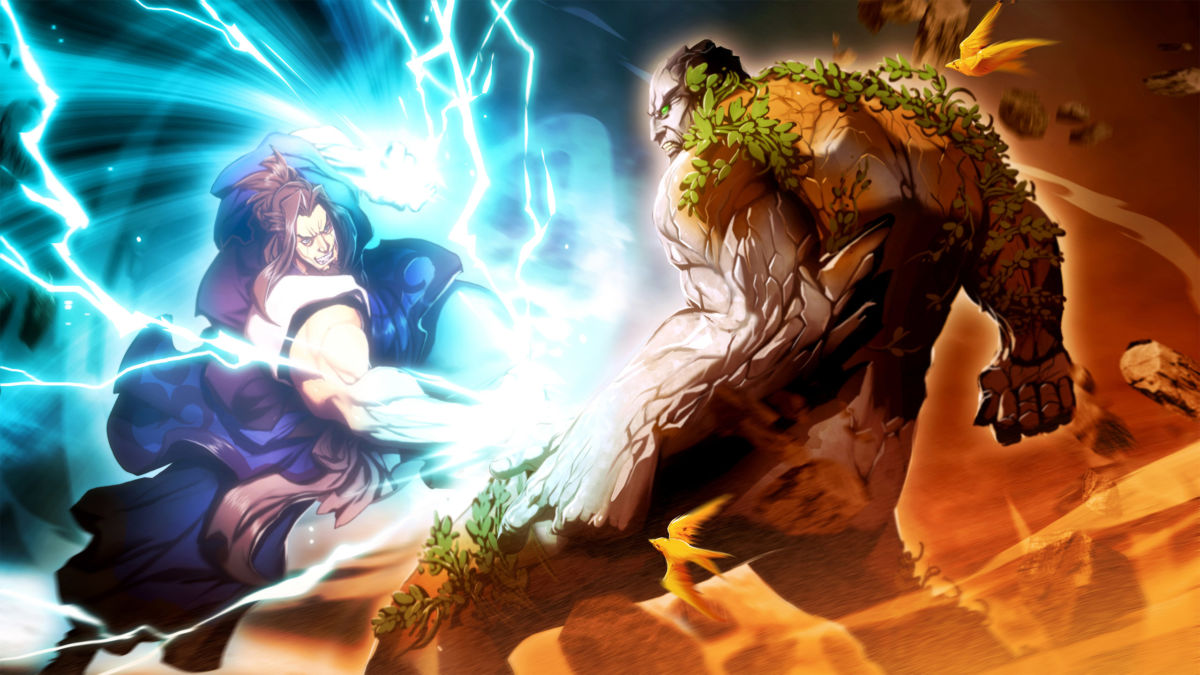 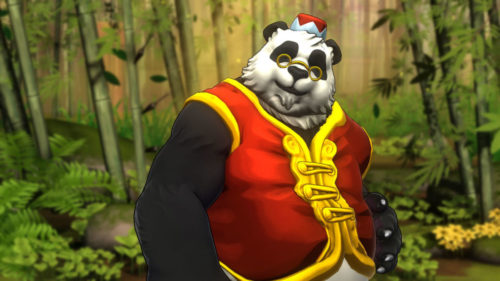 One of the biggest barriers of entry to fighting games is execution, whether that’s the execution of special moves or precise combos that require specific timing. It’s why games like Divekick or Footsies are so interesting, as they boil fighting games down to their essential parts. Execution roadblocks are removed, yet the strategy and tactics are all present.

Fantasy Strike is the next step up from those more simplistic titles, giving players a much larger moveset while still ensuring that all your best tools can be activated with just a simple press of a button. It’s a unique take on the genre that could only really come from a veteran such as David Sirlin, but how well does it pay off? 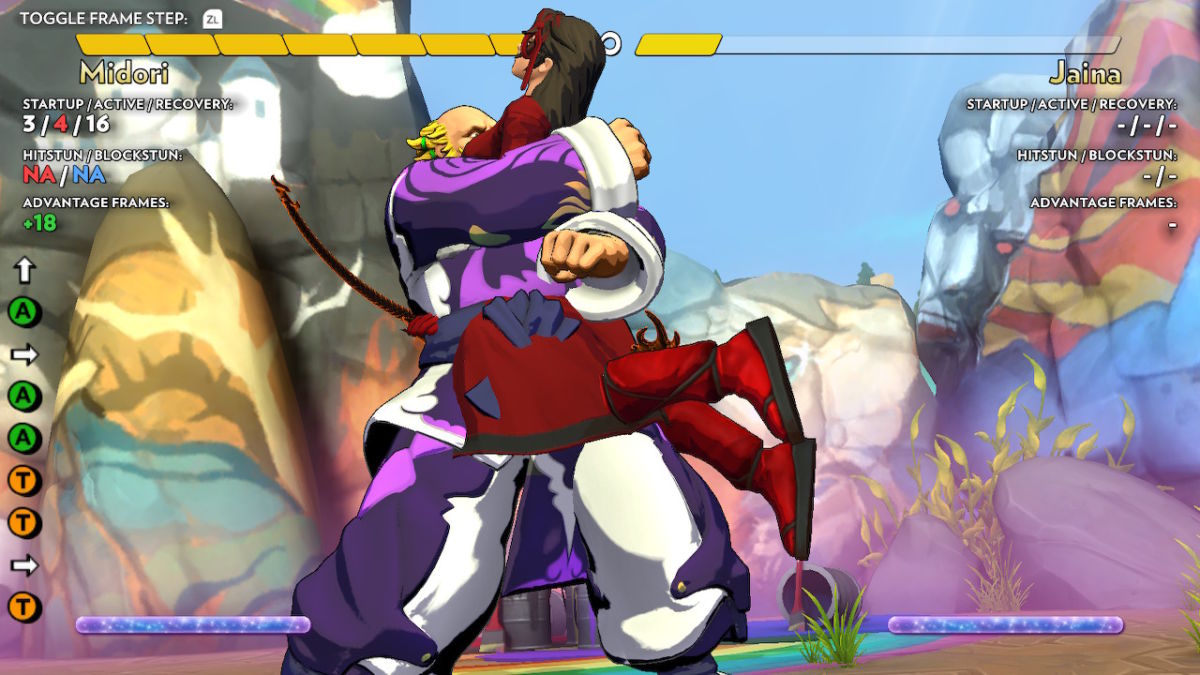 Fantasy Strike is a six button 2D fighting game. Players have a strike button and two special move buttons, along with a dedicated jump button. There’s also a throw and super move button tied to the bumpers. For someone who has played plenty of fighting games — and sucked at most of them — getting used to a jump button is a barrier in and of itself, but thankfully there’s an option to press up to jump that immediately feels much more familiar.

The special move button is exactly what you’d think: you press the button, you do a special move. No dragon punch inputs or quarter circle forwards here, just a simple button press to unleash some of your strongest tools. It’s simple, effective, and quite honestly I’m glad I didn’t have to perform traditional fighting game inputs on the Joy-Cons. 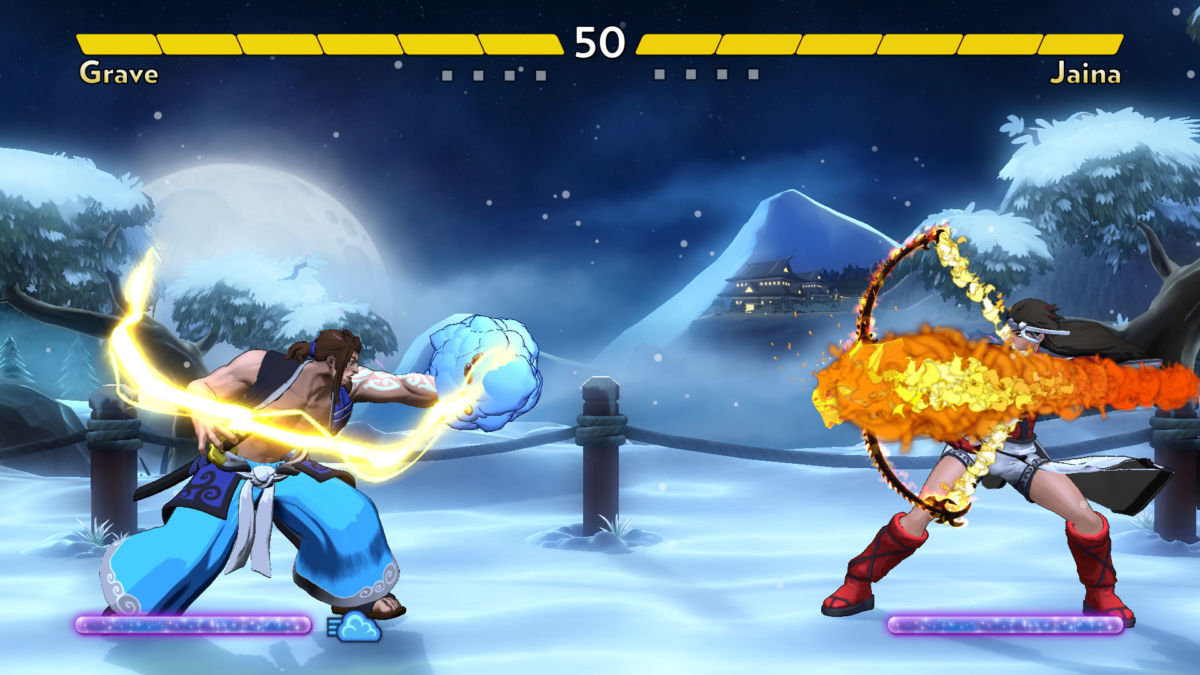 The button layout isn’t the only big difference this game offers compared to the rest of the genre. Fantasy Strike has no high or low attacks, meaning holding back blocks all attacks. While that sounds like an impenetrable wall of defense, blocking too many special attacks in quick succession will lead to you losing a chunk of health, so just holding back after gaining a life lead isn’t going to cut it. Blocking is still vulnerable to throwing and cross-ups too, so experienced players can still find their way through your defenses.

Characters in Fantasy Strike are also explicit in the classes and proficiencies, more so than any other fighting game, giving Fantasy Strike almost a veneer of a hero shooter. We’re not saying that the menu system also looks like it’s been lifted straight from Blizzard’s Overwatch, but we’re saying there are enough similarities for it to not be considered a coincidence.

The roster is split into one of four classes: zoning, rushdown, grappling and wildcard. Zoning characters use their superior projectiles to control space on the screen, while rushdown characters are at home in their opponent’s face. Grapplers specialise in throws, while wildcards have a unique gimmick that aids their gameplay.

Beyond the differences in strategies, each character has their own sized health depending on what class they’re in. Wildcards and zoning characters have 6 chunks in the bar, with one hit generally causing one damage. Rushdown characters only have 5 chunks, while the grappling characters Midori and Rook have 7 and 8 respectively. 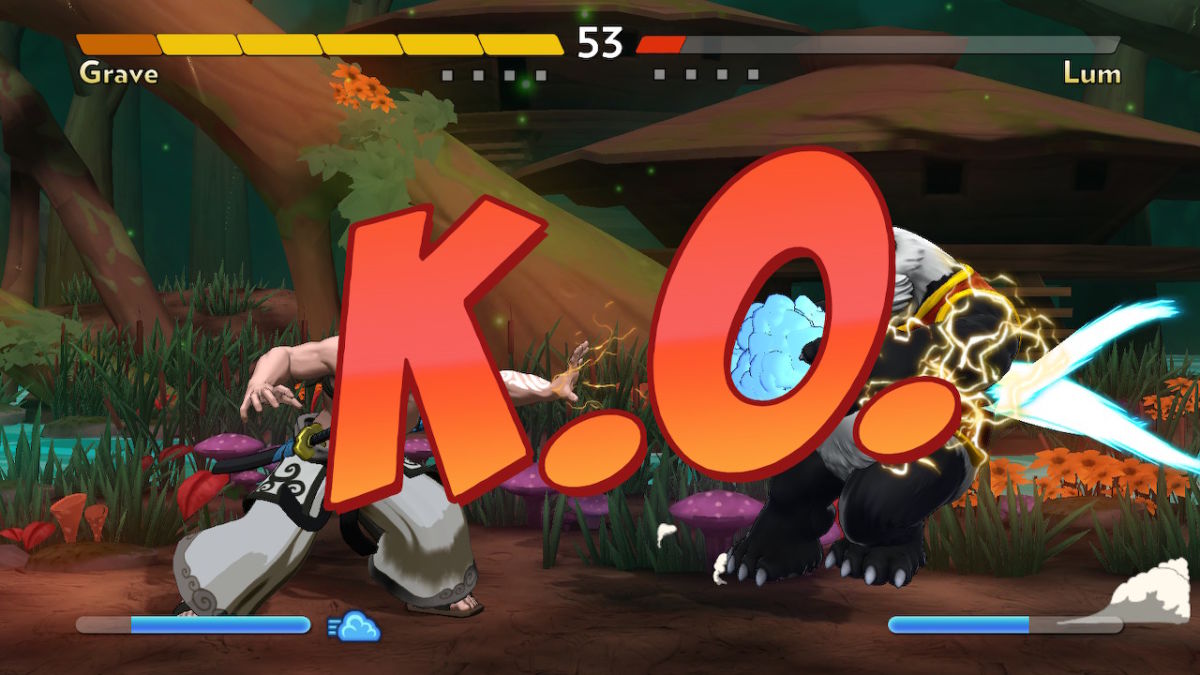 This change in health per character/class is to accommodate the different nuances with each character and class. Zoners and wildcards are pretty versatile, meaning they get a basic amount of health. Rushdown characters have increased combo potential and mobility, so they get less health as a result. Grapple characters aren’t quite as agile, and often need to tank hits in order to get within grabbing range, so their higher health balances things out.

Some of the characters you’ll play as seem pretty similar to established fighting game characters. Grave plays similarly to a Shoto character, with a fireball, uppercut and travelling hurricane attack, and although he’s a zoner, he has good rushdown potential, too. Meanwhile, Gieger plays a lot like Guile, as his “Flash Kick” and “Sonic Boom” attack can’t be used while moving forward, emulating Guile’s charge inputs. 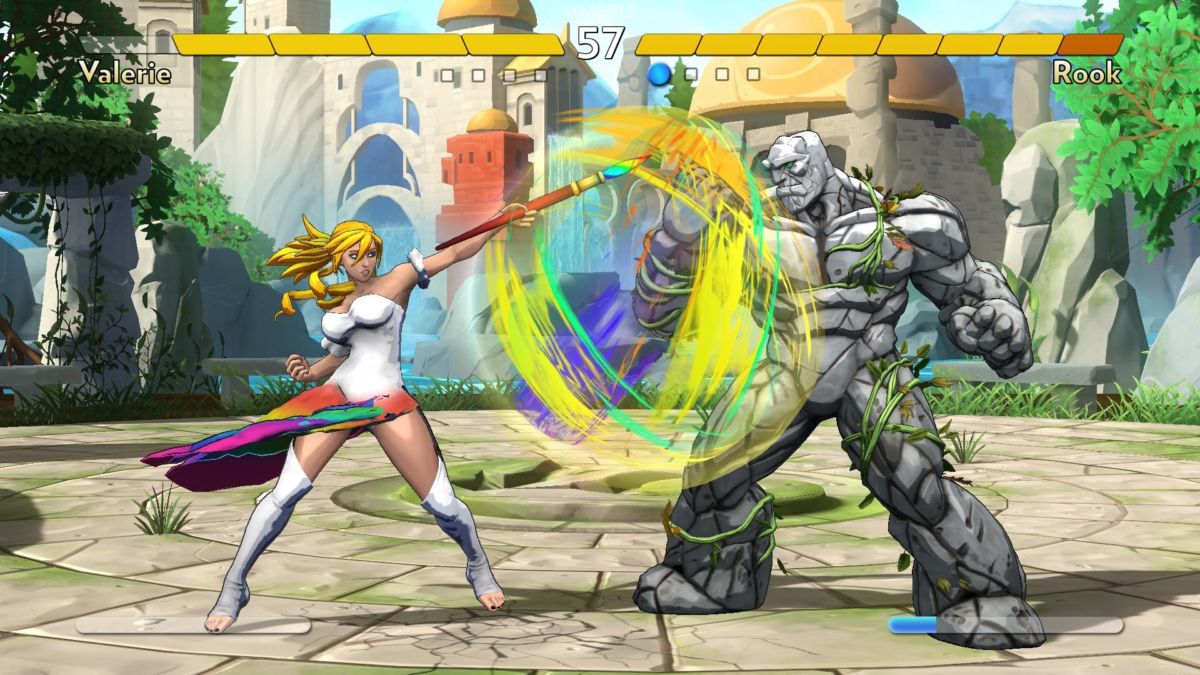 Other characters offer something completely new. Lum is a luck based character that makes him a risky choice, but getting a hard fought win through pure jamminess is its own level of satisfying. Meanwhile, zoner Argagarg takes some of Dhalsim’s stretchy limb tricks and adds some different ways of controlling space. Those tidal waves are mighty pesky, my dude.

The biggest change in the established formula is how Fantasy Strike deals with throw breaks. Ordinarily in fighting games, if someone throws you, you have a small window of opportunity to press the correct button, breaking the throw entirely. It can be unforgiving, as you might have read that the opponent will throw you but pressed the wrong button or simply reacted too late. 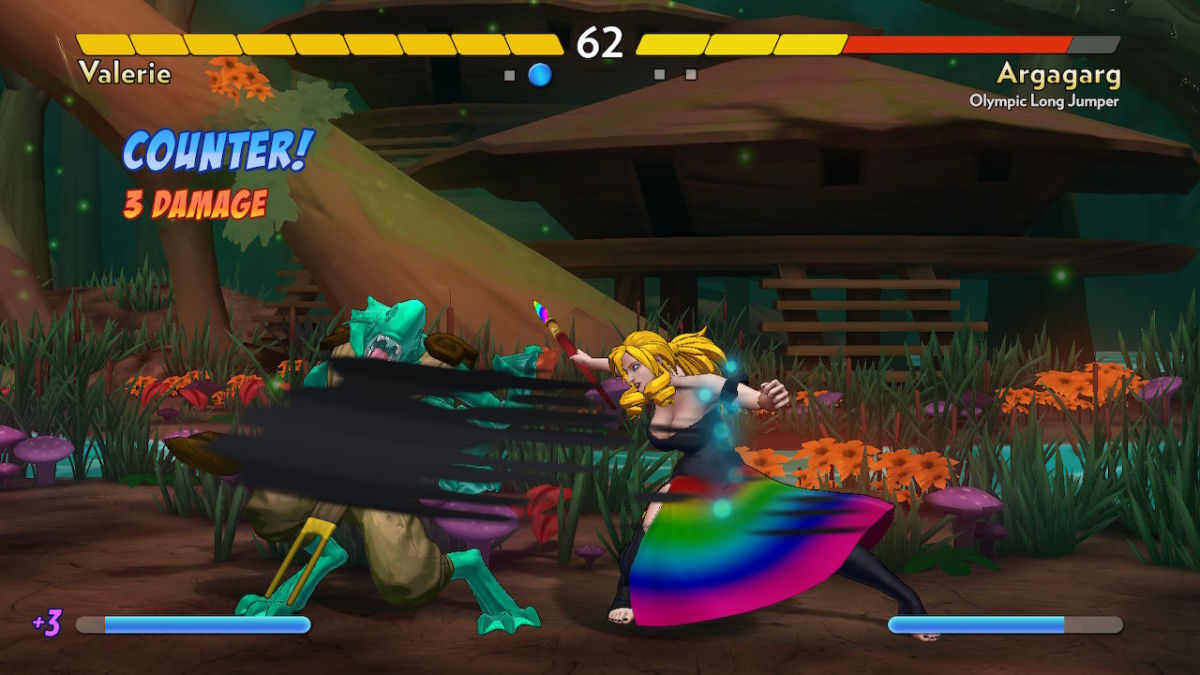 Fantasy Strike attempts to alleviate that with Yomi Counters, which is an interesting throw break mechanic that leads to some interesting mind games. Basically, if you know your opponent is going to perform a throw, you don’t input anything. No holding back, no attack inputs, nothing. Once the throw lands and you haven’t hit input, the Yomi Counter kicks in, dealing automatic damage to your opponent.

The presence of Yomi Counters makes waking up after a hard knockdown much more of a minefield than it would be normally. You can condition your opponent to think that you’ll throw when they get up after a knockdown, only to bait out an attempted Yomi Counter and punish with a full combo.

Yomi Counters don’t work for every throw though, as the grapple characters have their own command grabs that can only be avoided by jumping, making Midori and Rook even more dangerous. They also deal more damage with their Yomi Counters, so mastering the throw game either as or against a grappler is paramount. Honestly, Yomi Counters are a great mechanic that’ll separate the pros from the novices.

Unfortunately, the AI is a bit brainless right now, as they’ll spam throws at you after a knockdown, allowing for an easy Yomi Counter. This just robs the feature of its hype as you know its coming. We’ll have to see how they’re properly used once the online play is live and in the hands of the public. Online play was live before the embargo, but I had like one match with a real person, while the rest appeared to be bots. 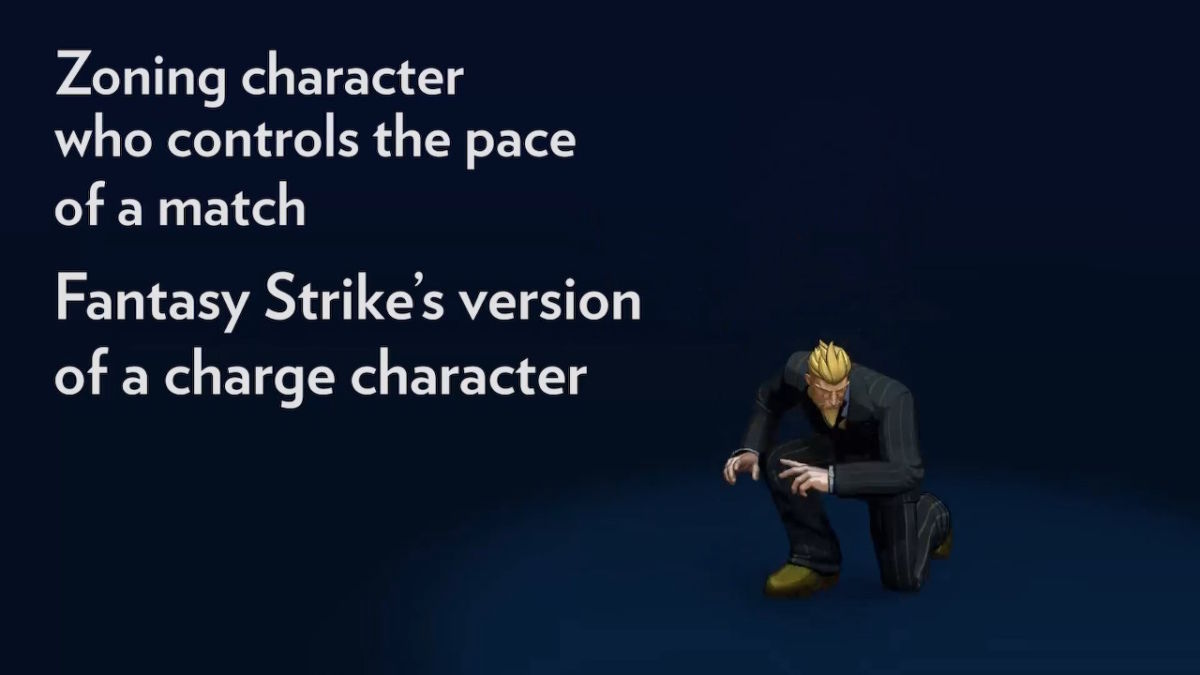 Right now, it feels like zoning is the strongest class right now. Keeping the opponent at bay with projectiles can be tough to deal with, particularly as characters like Jaina are capable of coating the screen with arrows. That said, the ranked mode of the game is designed around team fights more than solo battles. 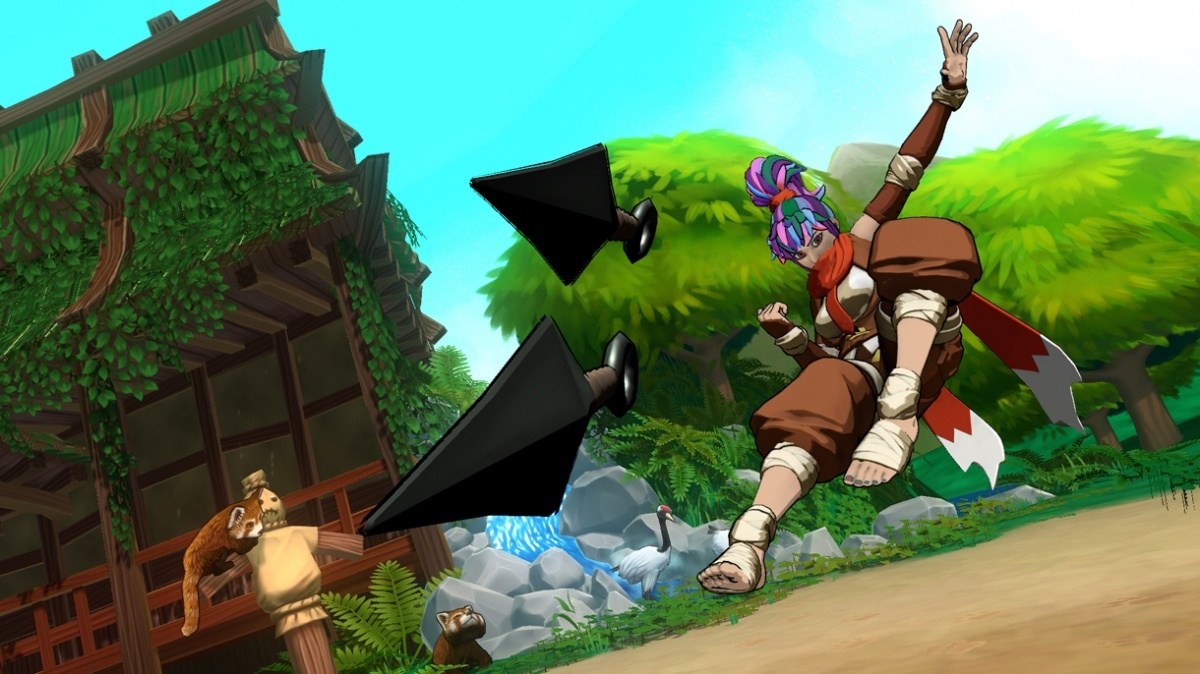 Players compete in first to 3 contests where they must win with each of their three characters, which properly allows players to see who the best truly is. If you lose to a bad match-up, but win the other two matches, you have two more chances to secure the win with your losing character. It’s a mode that incentivises knowledge of multiple characters, which is everything you could ask for in an accessible fighting game.

As for local content, Fantasy Strike boasts a wide range of unique modes, with Arcade ladders, Survival challenges, and Daily Challenges. The highlight is the Boss Rush mode, where you fight a steadily escalating wave of intense boss fights, giving yourself new moves and buffs in between fights. While it’d be nice to see the moves added to regular play in some capacity, it gives Boss Rush more depth than a simple survival challenge.

While Fantasy Strike has plenty going for it, nothing has been announced as of yet regarding post-launch content. Yomi, the card game which the characters from Fantasy Strike originated from, has 10 other characters that Fantasy Strike could utilise, giving the game a lifespan that’ll last long after the game’s launch.

Fantasy Strike also has various seasons where players can compete in leaderboards and ranked modes, but the pre-release season offered no incentive such as cosmetics, costumes and such to climb those ranks. While a Mortal Kombat 11-esque customisation system might be a step too far, some unlockable additional costumes would be lovely. Lastly, what’s the point of Arcade prologues and endings if there’s no gallery mode to replay them, or no unlockables when finishing them? Just a thought.

Fantasy Strike is a well-rounded package that has its cake and eats it too, giving true accessibility and ease of understanding to new players while offering enough depth and mind games to appease experienced players. We’re hoping that Sirlin Games keep supporting the game now that it’s fully launched, but the future looks bright for Fantasy Strike.

Verdict
Fantasy Strike’s philosophy of a truly “accessible” fighting game is a successful one, with plenty to love for new fighting games players and veterans alike.
8
Cultured Vultures is a pop culture website established in 2013 covering all things gaming, movies, and more. We eat your words.
All The News On The Biggest Games