A return to the Silver Age. 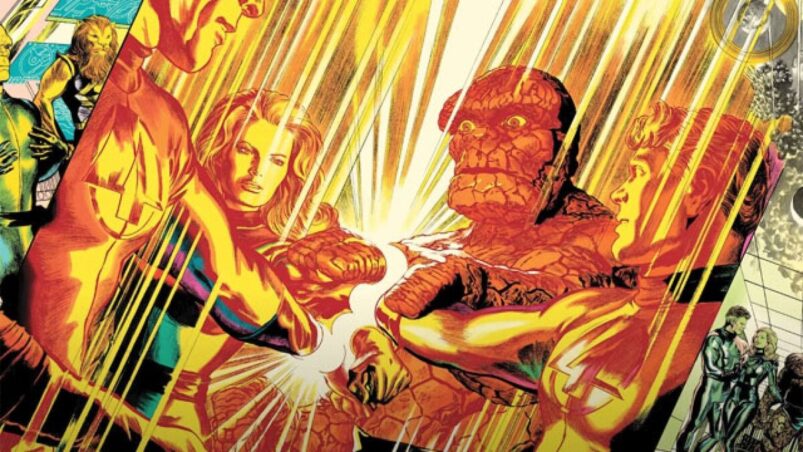 Fantastic Four creators Stan Lee and Jack Kirby’s legendary run on the title ended in 1970 after Kirby left Marvel Comics for rival DC. In the decades since, fans have often speculated where Lee and Kirby would’ve taken the comic book series next, had their partnership not ended. We’ll never know for sure, however, chances are it would’ve looked a lot like Fantastic Four: Full Circle.

Written and illustrated by fan-favourite artist Alex Ross, Fantastic Four: Full Circle is the first instalment in publisher Abram’s Marvel Arts line and picks up pretty much where Stan and Jack left off. Ross uses the pair’s seminal 1966 story “This Man… This Monster” as a jumping-off point for his own tale, pitting Reed Richards, Sue Storm Richards, Johnny Storm, and Ben Grimm against an inter-dimensional baddie with ties to their past.

The ensuing adventure is suitably thrilling, full of the same derring-do and crazy comic book science that defined the Lee/Kirby Fantastic Four run. Even so, Ross never sinks into outright pastiche, despite his obvious affinity for the sensibilities of the Silver Age. Sure, his storytelling isn’t exactly ground-breaking – don’t expect the formalist experimentation or in-depth characterisation of say, Ram V or Brian K. Vaughan here – yet Fantastic Four: Full Circle ultimately feels like a modern spin on classic formula rather than an outright rehash.

This is especially the case where the Invisible Woman is concerned. Ross breaks from the long-standing tradition of presenting Sue as the Fantastic Four’s resident wet blanket, who is always holding the boys back from going on escapades with shrill pleas for them to please think of the children (seriously). Instead, she’s a proactive force to be reckoned with in her own right, reasoning that the best way to deal with a threat to her family is to tackle it head-on.

It’s some of the most striking work of Ross’ celebrated career. It also speaks to one of the underlying themes of Fantastic Four: Full Circle itself: creativity. As Ross himself recently noted, his take on Mister Fantastic is that he’s as much a creative type as he is an inventor – in essence, the imagination aspect that drives both pursuits makes them the same thing.

This idea runs through Fantastic Four: Full Circle, in which Ross portrays Reed as the kind of guy who gets his kicks dreaming up ingenious solutions to impossible problems and putting them to the test. But more than that, it’s visible in the conception and execution of the story itself. Ross is clearly in awe of the artistry Lee and Kirby accomplished with their Fantastic Four run and pays tribute to their work by remixing it for a new audience.

In that sense, Fantastic Four: Full Circle serves as a love letter not just to Stan and Jack, or even Marvel, but to comic book creativity itself. By fusing the best of comics’ past and present together, Ross provides a tantalizing glimpse into the medium’s seemingly infinite future – with readers assuming the role of Reed Richards, itching for our next foray to frontiers unexplored. And with more titles still to come under the Marvel Arts imprint, at least we won’t have too long to wait.

READ MORE: 20 Best Christmas Comics To Read During The Holidays