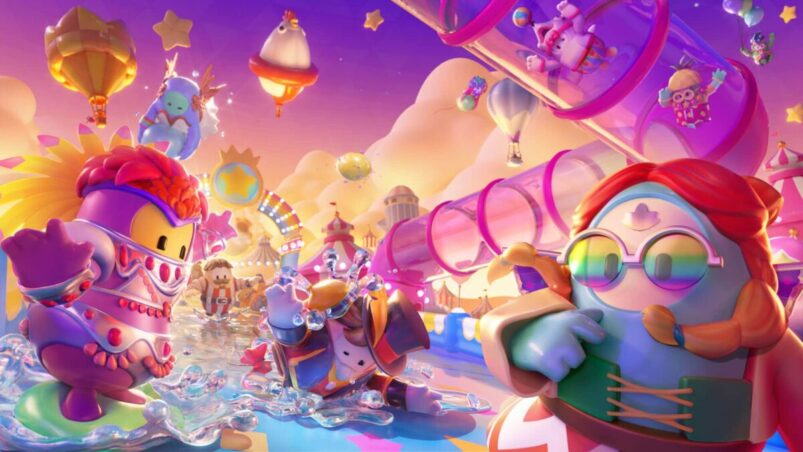 Earlier this week, Mediatonic made waves by announcing that their popular physics-based multiplayer game Fall Guys would finally be heading to other platforms in June, launching with full cross-play too. Players from across PC, PS4, PS5, Xbox One, Xbox Series X | S, and Switch will finally be able to enjoy Fall Guys together, ensuring that the servers will have a healthy selection of players for the foreseeable future.

The future of Fall Guys is certainly looking bright after that reveal stream, especially with the announcement that the game will even receive a level creator to allow players to make their own obstacle courses. The potential that could mean for content creators and community events is very exciting indeed, but the biggest reason to be excited is that it’s finally going free-to-play. While that’s normally a worrying sign for the future of a game, for Fall Guys it feels like it’d be the start of a new lease on life.

The most obvious benefit is the guarantee of players no matter the time or the place. Being able to play for free, with cross-play across all available platforms, is a surefire way to ensure a large community of players, especially when the barriers for online play being a paid subscriber benefit on PlayStation and Xbox have been removed. Switch players might have the short end of the stick in that regard, but that tends to be normal for the Switch as far as online is concerned.

When Fall Guys originally launched on PlayStation, it was available as part of the PlayStation Plus program, which allowed all subscribers to try the multiplayer game at no additional cost to their subscription. It was an incredibly successful move on behalf of Mediatonic, at least in the short term, as it meant that millions of players were available in the first month to experience Fall Guys for themselves.

Unfortunately, multiplayer games require healthy player bases in order to survive, and Fall Guys being a PS Plus game gave it an identity of a game that players shouldn’t shell out money for. If you can get it for free, why should you pay for it? After Fall Guys’ period of PS Plus availability lapsed, interest in the game tanked a considerable amount. The game has maintained some interest in the years between release and now, especially when it was announced for new platforms, but it never managed to stack up to that same level.

Fall Guys isn’t the only game to have dealt with this, however. A few months after Fall Guys, PS5-exclusive multiplayer game Destruction All-Stars launched as a PS Plus game, and it seemingly fared worse than Fall Guys did. Many were of the opinion that it should have been a free-to-play game anyway, and the fact that it’s now going to be part of the PS Plus Premium service when it launches next month kind of confirms that notion.

With Fall Guys going free-to-play, the game’s finally settling into an area that many would deem is the rightful place for it. The amount of cosmetic items that have been available to buy in the Fall Guys shop over the past year or so practically made the game feel like a free-to-play release, but that premium price point for entry likely would have put some people off. This is especially true if it wasn’t launching on new platforms as a free-to-play game. Those who already tried it on another platform probably wouldn’t double-dip, and so on.

It’s not clear yet whether this free-to-play release for Fall Guys on all platforms is going to lead to the biggest boom period for the game since its launch, but the future is certainly looking bright for people who enjoy watching beans getting yeeted by hammers. If nothing else, it’ll just be nice to hop back into the game with a new group of friends.