Evil Dead: The Game Cannot Be Played Offline At All 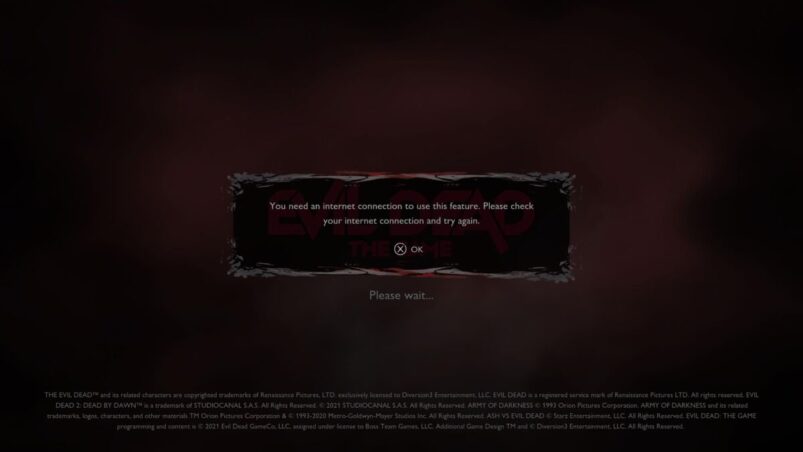 Evil Dead: The Game is the first multiplayer game in the Evil Dead universe, and it’s something that really comes alive once you take the action online and try to hunt down daggers and maps with randoms or friends. But can you play Evil Dead: The Game with no connection to the internet?

The answer is no, you cannot play Evil Dead: The Game offline without an internet connection. We turned off our network connection on PS5 and couldn’t even get past the initial splash screen. We couldn’t access the game on PC via the Epic Games Store either without an internet connection, though that’s more of an EGS problem. That said, Evil Dead: The Game is completely unplayable if you aren’t connected to the internet.

This is pretty disappointing, as Evil Dead: The Game does have modes that don’t require to play the game with other players. There are Missions, which are basically the single-player levels that act as retellings of the franchise’s main story beats and also help you unlock new characters. You can also play solo vs AI in just a normal match with a team filled with AI, so it’s really odd that there’s no option to turn any of the content that you’ve purchased should the internet be down or the platform-specific network is unavailable, even if it requires no online play.

The only reason we could see for this oversight is that the game constantly has to be online to make sure that you have the right to access extra content, like your pre-order bonuses or whatever will be in the upcoming Season Pass. However, apparently it’s because all of the damage values are actually handled server-side by Saber, which is odd. It’s definitely a bummer for preservation, as even Friday the 13th allows you to play offline and that game has been abandoned.

Hopefully Saber Interactive will look into this decision going forward, as right now, it might be a bit of a sticking point. The Missions are probably the best re-enactment of the Evil Dead series to date, yet there’s every chance they will be completely unplayable one day because of the lack of ability to play offline. Not groovy.