Doraemon Story of Seasons is a competent farming sim that’s hampered by snail-paced narrative elements and the wrong kind of tedium. 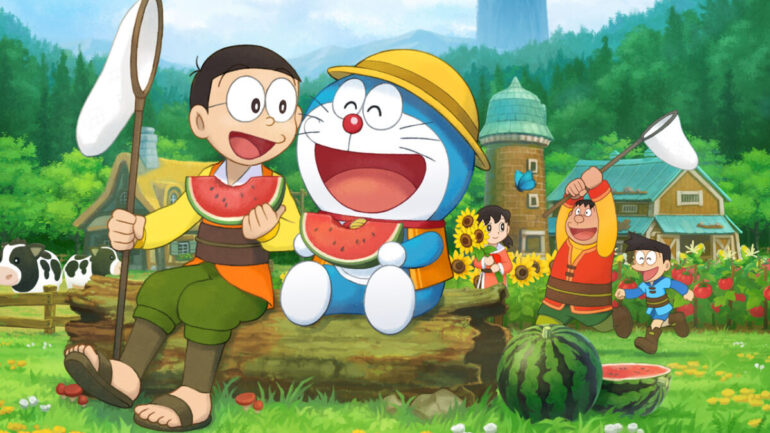 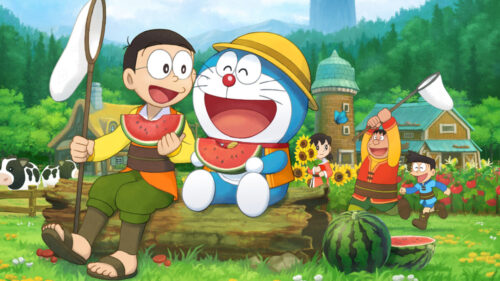 I grew up on a farm. Some of my oldest memories are of chasing down cows that had escaped their pens, pulling corn in thick summer heat, and straining to hammer a rabbit hutch together on a Saturday morning while missing One Piece. Despite all this, the farming sim game has always been an enjoyable, idealized version of my own childhood. All the animal pals and sense of accomplishment, with none of the sore limbs, splinters, or snake bites.

Doraemon Story of Seasons, the crossover between the long running manga series Doraemon and the Story of Seasons series (previously known as Harvest Moon), has finally come to the Playstation 4, bringing with it a cartoonish and whimsical perspective on this hallowed farming sim genre.

You play as Noby, a precocious and kind-hearted boy who, along with a few friends and his companion Doraemon, a robot cat from the future (don’t dwell on it, because the game sure doesn’t), gets sucked through a portal and lands in the mysterious world of Natura, in a town full of mostly friendly, amenable people who have no idea how Noby and co. landed there.

Noby and friends try to find their way around their new surroundings and pass the time until they figure out a way back home. While all his friends find jobs in town, Noby ends up with a run-down farm to take care of. You then spend your days working the land and connecting with the townspeople, getting involved in their personal lives and the overall mystery of the storm that brought Noby and his friends here.

With this set-up in place, the game gives you exactly what you might expect: Noby chops down trees, smashes rocks, tills soil, plants seeds, waters crops, crafts better equipment/ items with the materials he finds, raises livestock, sells his new farming goods, and gives gifts to townspeople to perform the video game definition of being a good friend and trustworthy person. Noby has finite stamina that goes down with every action he takes, and can only do so much before he needs to go to sleep for the day. Seasons pass, certain days are holidays with special events, and before you know it, Noby and his pals are spending years in this strange new land.

It’s all the expected fare of a farming sim in the vein of series predecessor Harvest Moon or the mega-hit Stardew Valley, but with some added touches of Doraemon flavor. For example, in the source Manga, Doraemon has a number of crazy gadgets that he can use to help Noby and friends in any number of shenanigans. As you progress through Story of Seasons, you slowly gain access to more and more of these futuristic items, providing you benefits like fast travel. Unfortunately, due to Noby’s established position in his own continuity, you cannot grow up or date anyone in Natura. Longtime fans of the dating and marriage mechanics from past Harvest Moon/Story of Seasons games will be saddened by this loss, though it is an understandable absence.

While there aren’t any dating systems, there are plenty of other mechanics to occupy your time. From farming to fishing to bug catching, there is always plenty to do. However, the game doesn’t seem very concerned with how you interact with all of these systems. At the start of the game, your backpack is woefully small to the point that when you’re holding all of your starting tools, you only have room for three more types of item. Three. This means you have to be very intentional and careful when you choose what to carry and what to leave behind for the time being, and while this thoughtful approach to Noby’s loadout is an interesting limitation in theory, in practice it means having to run back and forth to your own storage like you’re a tetherball tied to a post.

Noby is also very particular about his positioning and how close he is to crops, or wood, or fruit, or anything in the world. You can use the D-pad to pivot Noby without moving him, and while this may sound like a trivial function, it actually quickly becomes integral to the game, because if Noby is just a frame beyond an item on the ground, he will be unable to pick it up. The game is full of these types of prickly interfacing choices, where the slightest deviation cannot be overlooked and any ideas that might streamline the process are ignored.

There’s also a distinct lack of feedback in activities that you’d think would have some sort of haptic response. From hammering rocks to fishing to mining, actions that should have some texture or weight to them are instead weightless. The appeal of farm sim games like this is certainly the chance for a player to get lost in the routine and fold their brain into the serene repetition of watering crops, collecting materials, going to bed and doing the same thing the next day, but Doraemon seems to have jumped straight to the mindlessness stage, overlooking the aspects of these tasks that make getting lost in them feel fun.

Despite all my frustration, there is good stuff in here. Once you get over the sizable hump of starting your humble farm and get your routine rolling, Doraemon becomes, if not more fun, more gratifying for all the grinding you’ve forced yourself through. No matter how much a pain in the neck it might be to go through the trouble of clearing away the debris on your farm again, there’s still a definite thrill in looking at the splendor of fully-planted fields, happily fed cows and chickens, and a buzzing beehive producing honey. The character models are all very cute and full of personality — it’s immediately clear why Doraemon has been such a popular franchise for 50 years. The soundtrack is pleasant and peaceful, the perfect music for a meditative session of watering yams. The townspeople all have distinct personalities, even if they aren’t particularly deep, which means they’re easy to remember and recognize as they walk around on their daily journeys.

While the visuals aren’t pushing any game system’s hardware, they really don’t need to. The soft lines and bright colors make the game feel very welcoming, more welcoming that the controls do by far. One tiny aspect that I found very endearing: when you begin the game, the loading screen has messages like ‘making speech’s hair,’ or ‘baking some fresh cookies.’ It’s an inconsequential detail, but it does contribute to the warm, bright-eyed spirit of everything. So while the game isn’t pushing any new boundaries in its genre, it’s certainly playable and has enough charm to pull you along for a few hours.

However, all that charm can’t keep you enthralled forever. As someone who grew up on a farm, I can verify that Doraemon Story of Seasons has accurately captured the tedium and frustration of working on one. Tasks take longer than you think they should, and yield far less than you would hope at first until you lower your expectations. Navigating menus transferring things into and out of your tiny backpack is always an awkward exchange. While the beginning of any of these crafting-based, slow-growing farm sim games is meant to emphasize slow, incremental growth that eventually snowballs into massive super-farms operating at the height of efficiency, Doraemon really commits to making the early stages fumbling, grueling, and dull.

The game is also in no hurry to let you play it. The opening cutscene, and subsequent cutscenes before you’re able to do anything but click through dialogue, takes over an hour. Even after this deluge of exposition and character introductions, in which this game introduces you to literally the entire town before you’re allowed to do anything but follow Doraemon from NPC to NPC, the game routinely interrupts your fledgling progress for another cutscene explaining its systems to you in great detail. On the one hand, it’s emblematic of just how much there is to do in here that so many tutorials are warranted. On the other, the game front-loads all of this material with so much density that by the time you’re mercifully allowed to crawl into your own bed, only to wake up to another cut-scene, you’d be forgiven for not remembering this was a farming game in the first place.

Between its tedious gameplay, lack of intuitive game mechanics, and glacial story pace, Doraemon Story of Seasons is a tough one to recommend, especially on the PS4. If you’re absolutely starving for another one of these types of games, it might be more palatable in smaller chunks, played on the go on the Switch. But as a full-time game marrying two long-running franchises, this title has plenty of visual panache, but very little of that creative, joyful spirit has seeped from the visual and into the mechanics. 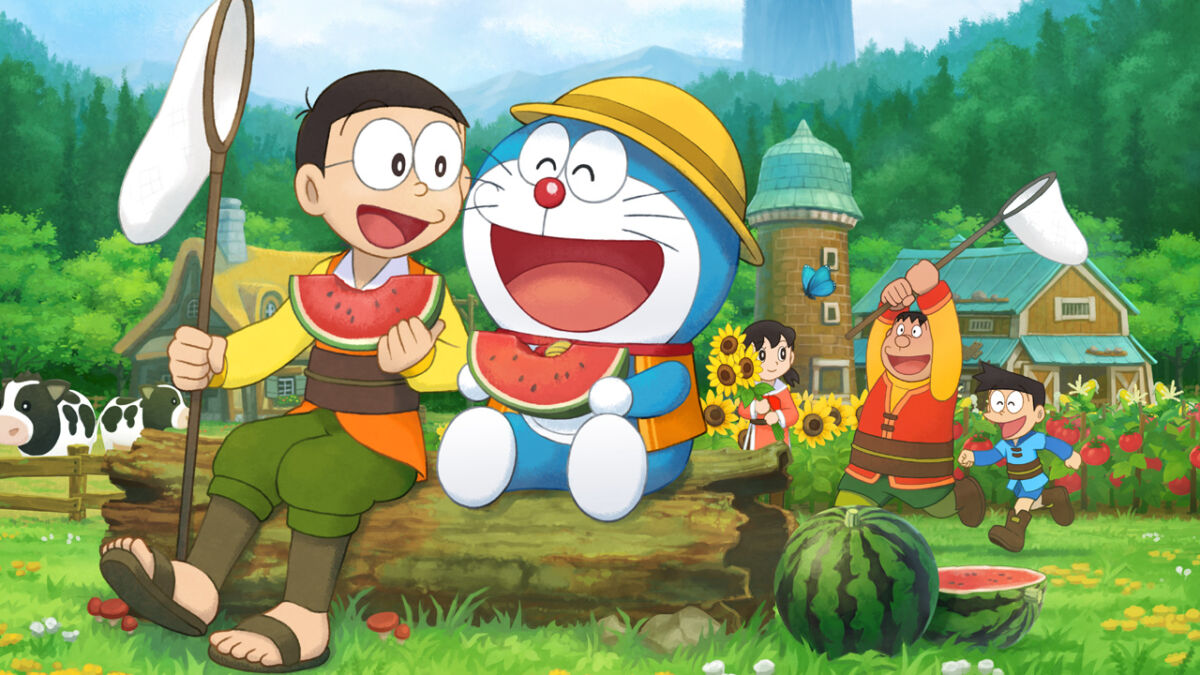 Verdict
Doraemon Story of Seasons is a competent farming sim with an enticing look that’s unfortunately hampered by snail-paced narrative elements and the wrong kind of tedium overwhelming its gameplay.
5.5