On Friday 26th May, Donnie Yen was in conversation with Robert Milazzo (founder of The Modern School of Film) at MCM London Comic Con 2017. Titled as “The State of Martial Arts”, the conversation spanned Star Wars, Donnie Yen’s early life and more, and you can find some of the questions and answers below, transcribed for those who could not attend the panel. (We also took the time to write up the answers to his Q & A with fans, if you’re looking for those!)

RM: I was thinking a lot about the Chinese word “sifu”. How do you define that word?

RM: Do you consider yourself a sifu?

DY: (long pause) Uhhhh…you know, I think I’m both, I’m a teacher and a student. I don’t have many students, because I dedicated the last twenty-something years of my life to the film industry…I would rather call myself a full-time filmmaker and an amateur at martial arts! Everybody on the set, I consider them students I guess, because I like to share my experiences in the decades I’ve spent making action movies. But at the same time I consider myself a student because each time I finish a movie, I look back and I say to myself: “There are so many areas where I can be even better.” And I’ve tried to keep that way of thinking. In each movie, I strive for a breakthrough…there’s so much more to learn. The more I learn, the more I feel like a student! 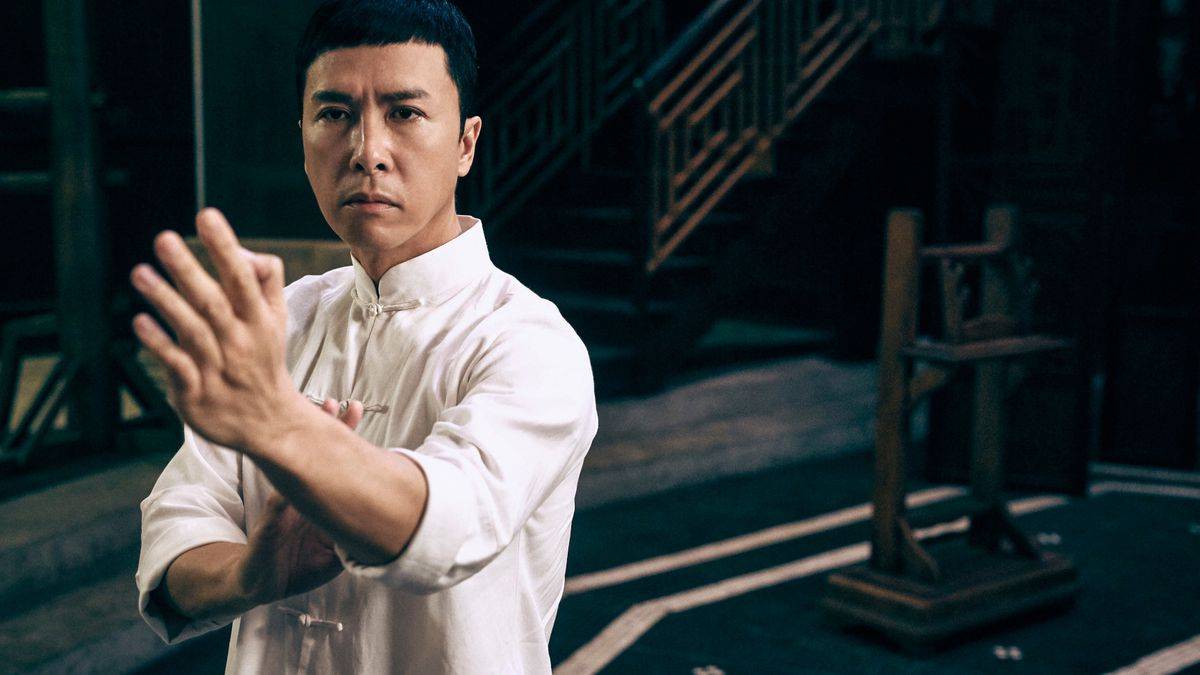 RM: I think there’s a great humility to your work. I think your performances are very passionate, yet humble. I don’t just think it’s the characters–I don’t think you can fake humility…there was a real Master in your family though. Your Mom’s kind of a badass…

DY: I was born in China, and when I was two years old, my father took me to Hong Kong because that was before China really opened up [as a country]. I was separated from my Mom…she stayed in China and dedicated her time to martial arts. She’s always been a great martial artist, as well as a great soprano. That’s a very strange combination! (laughs) Finally, we reunited when I was about ten, eleven years old…I started studying martial arts with her, and then after two years we moved to Boston, where she opened up her Martial Arts Institute.

DY: Around that time was when we moved to Boston, yes. I was about eleven. But you know, as a kid, an immigrant, your parents have no time for you. So what they do is work all day, and I was always a rebel and always curious about other forms of arts besides martial arts. I used to run around and explore different styles of martial arts…I was a little skinny kid in the bad parts of Boston, but that was the kind of person I was, I grew up with this curiosity and went out to explore.

RM: Can you talk about when you first started doing martial arts films? Did you grow up watching them?

DY: I grew up watching kung fu movies all the time, like most of you guys. I grew up in Chinatown and one of my hobbies was watch[ing] the double features at the movies–I used to watch every single one of them! Every one! Three, four movies a week…and I would imitate all the Jackie Chan movies, back in my Mom’s school.

RM: Ip Man is now a household name…the fourth one is coming soon. Did you consider these movies a turning point in your career?

DY: I try to take things one movie at a time. Even back in the days where my career was at the bottom…not even just [the] early stages, I’ve had some curves in my career. Back in ’97 when I directed my first film, I had a lot of financial problems. When I look back I think “wow, I had so many obstacles”, but I also had a couple of breaks…it’s really a long battle with my own career path. I just enjoy what I do, you know? Quite blessed the last twelve, fifteen years. Now I’m very fortunate I can choose my films, and choose the films I like. 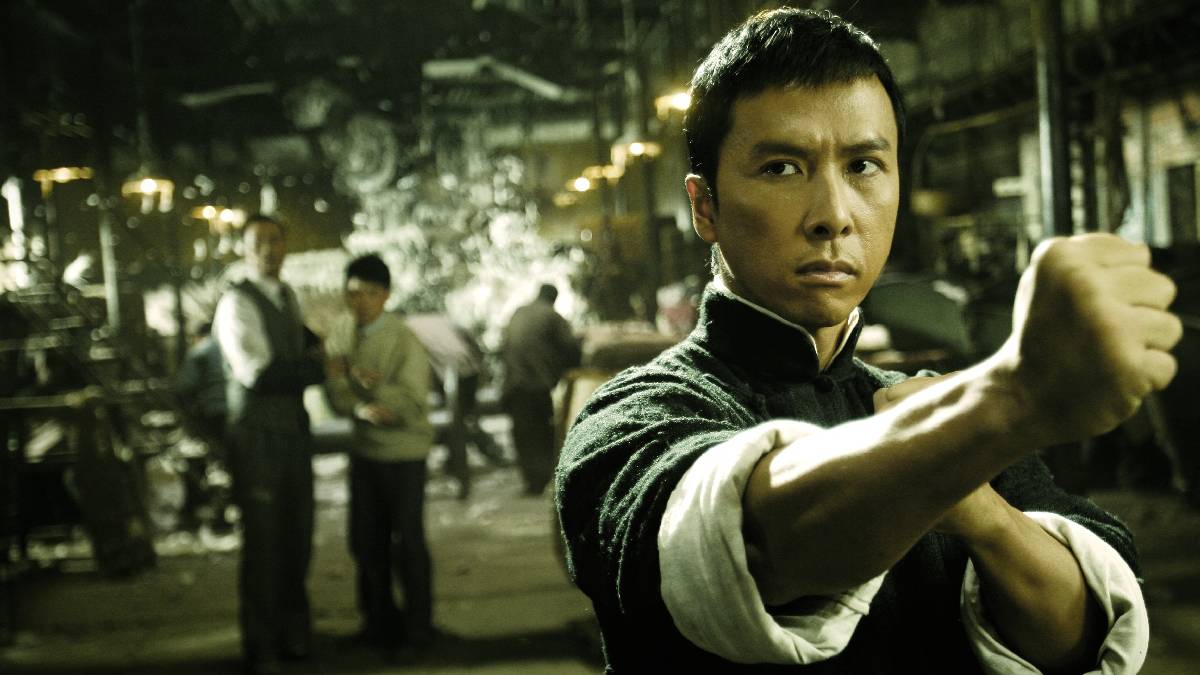 RM: I think it’s important to hear that, especially for people in this room, for fans of your career. No career goes [straight up]. Bruce Lee was the same, before he wrote his book…I know he’s been such a great inspiration to you, you’ve paid homage to him in different films. What did he mean to you when you first watched his films?

DY: Like everybody else, I was a big fan. As a young teenager, I needed a role model, and being Chinese, I didn’t find anybody except for Bruce Lee. I guess as a martial artist, I tried to relate to him…you know, you gotta remember, during my era, we didn’t have a lot of luxuries. No iPhones, my family was working very hard. All my time was dedicated to martial arts. Also piano! (laughs) I come from a strange combination of music and martial arts…I did spend a lot of years studying piano, so I started to explore music too. I found a beat-up old piano at this Boys’ Club so I started learning the piano as a kid. When I was fifteen, I said to myself: “Should I play piano, or be a Kung Fu man?” But I never thought I could be the best musician, but I had this feeling inside that I could be the best martial artist. I still play piano–my kids do too, my wife. I still love music.

RM: So, talking a little more about Bruce Lee, what was your first introduction to those films like?

DY: My father used to take me to cinemas, and Bruce Lee was one of the [movie stars] we always watched. When I was older and started to practice martial arts, I really started to see the beauty in his films.

RM: You’ve worked with Sammo Hung, who’s worked with Lee. Did you ever talk to him about Bruce Lee? Or Jackie Chan?

DY: I’m sure I have, we’ve had lots of conversations. (laughs) The culture in Hong Kong film industry involves taking up different positions–he does different things, like directing, or fight choreography. I learnt lots from them, and through talking to them, about their knowledge and experience in the industry.

RM: I want to go through some of the great martial arts figures and just ask you where you put them in the history of martial artistry. But first, I was thinking a lot about Rogue One, and the Zatoichi influences…

DY: Zatoichi is a classic samurai…blind bladesman. I was inspired by him, yes. The director called me and asked me my thoughts on Chirrut. Chirrut wasn’t exactly like [he is in the film] in the script. He wasn’t supposed to be blind, but the director asked me, and I said “You know what? I think it’d be a lot cooler if he was blind.” (laughs) I also suggested Chirrut should have a sense of humour…the original role was slightly more cliche. “Oh, I’m getting Donnie Yen, be Chinese”, you know? I kind of felt like the world was ready…just because I’m Chinese, I don’t only eat rice! So we collaborated and it shaped the character to Chirrut. Some of the lines I even improvised on set–for example, the part when they cover my face, and I say “Are you kidding me? I’m blind!” I’m so used to improvisation, in my world. It got approved by Disney, and it stayed in the film.

RM: [Chirrut] is such a beautifully drawn character, especially influenced by Zatoichi and such…

DY: The inspiration was from several things, little bit of Japanese samurai movies, little bit of Ip Man…just years of me in my different roles. I was shaping the character on a daily basis as I was filming. I don’t believe you can totally understand the character until the end of the movie. During shooting, you’re constantly getting feedback from actors…you’re learning about the content of the story.

RM: So your history with martial arts is an interesting one…

DY: I might break people’s hearts, but I only started to study Wing Chun a few months before we began shooting Ip Man. You know, a lot of martial artists say to me: “Oh, thank you for what you’ve done, we greatly appreciate it.” For me, I’m a martial artist, it’s in my blood. The most important thing for me is “How do I use my films to connect with people?” I just got really lucky that some of these films also carry along some martial arts influences.

RM: What do you think about someone like Jet Li?

DY: It’s interesting that before Bruce Lee, there were these black and white kung fu movies. Poorly shot, very slow…not very realistic. Lee really brought along the realism. And then, Jackie Chan with the comedy and the acrobatics. Jet Li brought the Northern style of martial arts. You see a lot of the “1,2” choppy style, and there’s a reason for this. Kung fu movies started in Hong Kong, and in Hong Kong you have the different language and culture, and it’s very choppy. Cantonese is a very choppy language compared to Mandarin. Mandarin is like “ahhhh…”, like singing, but Cantonese is like “chop-chop-chop-chop!” So the style that we’ve been practising, like Wing Chun, the “1,2” style, that influenced the majority of the fighting styles in the movies. But Jet Li did the Northern style: all the flow, very fluid motions. From Jet Li, he basically changed the rhythm of Hong Kong action movies.

RM: What do you think about Chuck Norris?

DY: Every single [action star] has their own moments, and their own contributions to the genre during their own periods. I think modern technology’s taught us so much…we have iPhones, we can shoot movies by ourselves, we’re more sophisticated. You can’t necessarily look back at some of these seniors…they changed the whole history of martial arts films.

DY: I’m still changing and evolving and progressing. Every one of my films has something different about it because I’m evolving. It goes back to my statement at the beginning of our conversation, that I feel like I’m a student all over again. Every movie, I feel like there are more things to learn. I think only with this type of openness that you can bring these kind of films to that next level. You cannot sit back and say “Oh, in the past, we used to do that.” A lot of people still compliment [my old movies], but I don’t take it too seriously. I want to progress to another level. I’m always learning.

Thank you to Donnie Yen, the MCM London team and The Modern School of Film for allowing us to sit in on the talk.