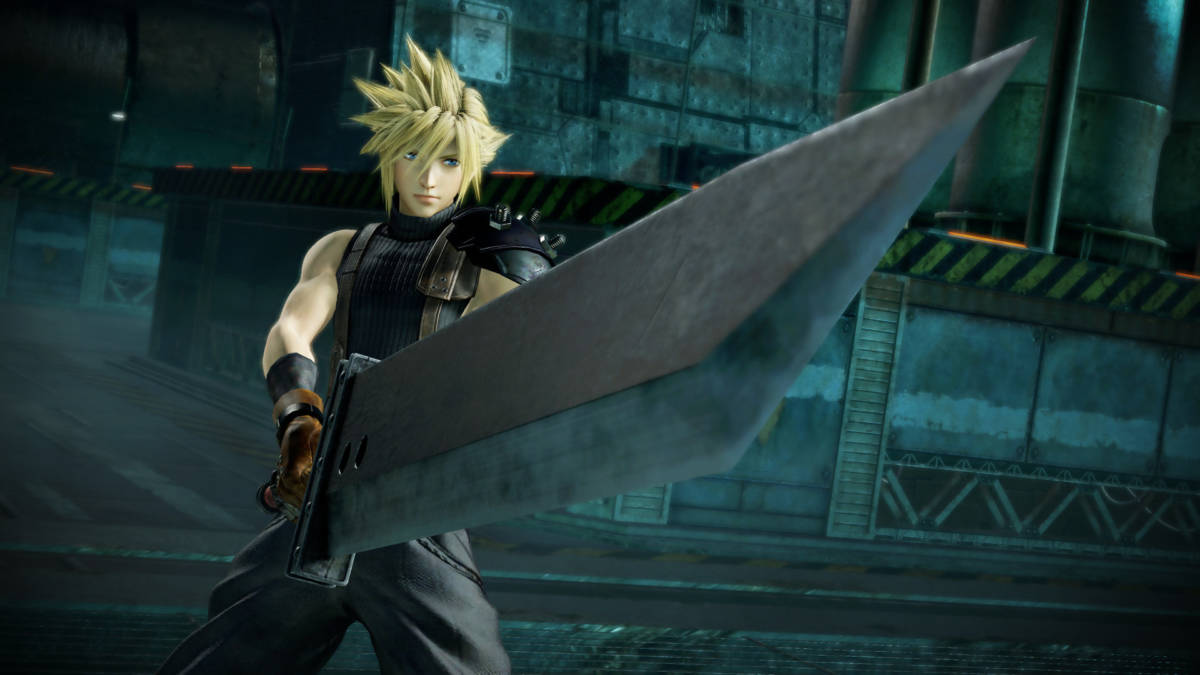 Thankfully, my experience with Dissidia has been mostly positive. However, it did present itself with a few complaints that may switch off more headstrong or impatient gamers. You start the game off with a choice of 6 summons to choose from who are all your favourites of the franchise including Ifrit, Shiva and Bahamut to name a few. Sadly, your choice is picked at random and it’s not entirely clear why, either. For the first hand experience of Dissidia it was baffling that you only had one choice and that was your lot, until you were able to unlock more along the way.

You are then greeted by the familiar voice of a moogle and as a Final Fantasy fan, I have to say I cannot stand the little buggers, especially now that they talk and every other sentence ends with the word ‘kupo’. Thankfully, after you’ve picked up the basics in the tutorial you can switch off the “helpful advice” in the options and I recommended you do so. The game can get frustrating enough without a moogle constantly reminding you to hold L1 to block when you’re in the middle of being bombarded by Sephiroth flying majestically out of nowhere, laying the smackdown and having you fly across the map. 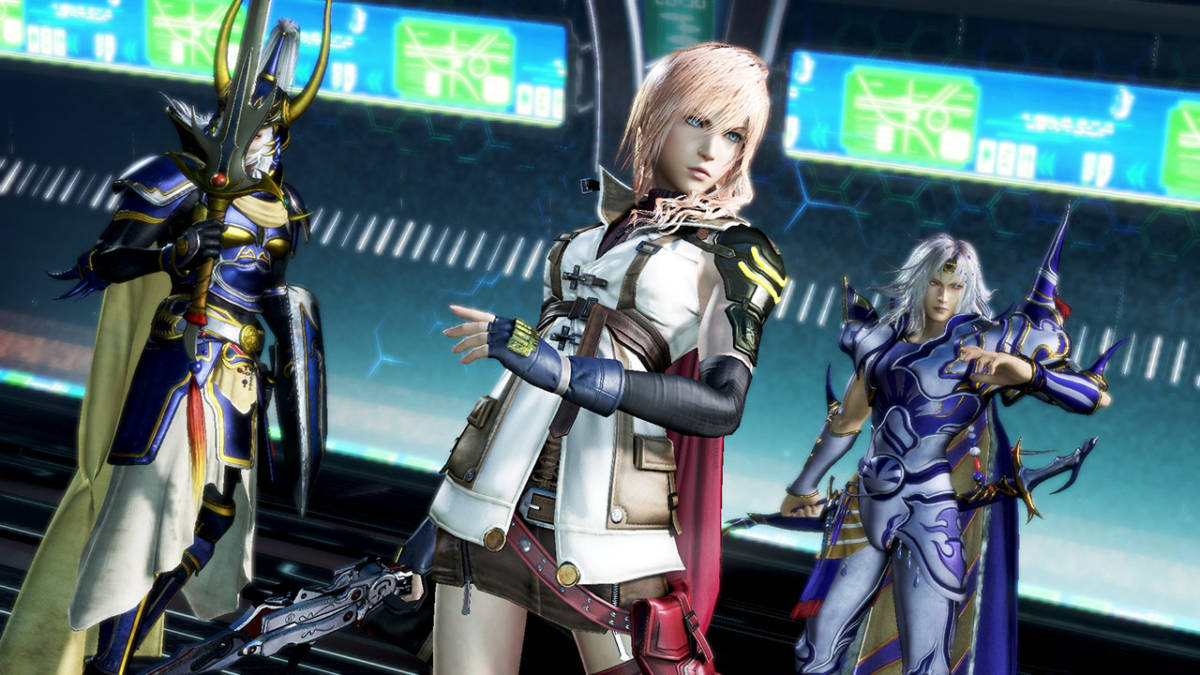 So, off to a rickety start so far, but luckily, the battles are just as tremendously fun as the previous installments; players can pick up to 3 characters from a very in-depth roster, with four different classes at your disposal. There’s the Assassin class, who are light on attacks, but serve as excellent fighters to chip away at your enemy, the Vanguard class are brilliant heavies that can annihilate your opponents with ease, the Marksmen class who are good at ranged attacks from afar and the Specialist class, which I just want to say are a jack of all trades and I don’t think Square Enix nor Team Ninja knew what they are for. In theory, this gives you plenty of opportunity to find a class that’s best suited for you. For me, it was Vanguards and Assassins, though the Marksmen were fun and the less said about Specialists the better. There was something about getting into your opponent’s face and hammering away at them that made the game all the more fun.

The rules of the matches are simple enough: it’s 3-on-3, you run around beautifully detailed maps based off of previous Final Fantasy installments and the first team to achieve 3 knockouts in 3 minutes wins. How to get to that victory is another plan entirely. You have two forms of attack, the circle button, combined with either the directional buttons or the dash button. R1 is your ‘bravery attacks’ – these don’t affect your opponent’s HP but limit their strength instead. You can also build up your strength to unleash your HP attack using the square button. It’s hardly Tekken mechanics, I’ll give you that, but it serves the job well. The map is also littered with summon crystals you and your team need to attack in order to build up your summon meter, so you can unleash your aeon. Summons work as a way to weaken your opponents while sending helpful buffs to your party, aiding you to turn the tide of battle if things are getting tricky.

If you get bored of that, there is another mode known as “core battles”. They essentially work as a more violent and frenzied capture the flag where players must knock opponents away from their cores in order to attack and capture. I didn’t have a personal gripe with the mode, however, it did lead to more headaches for an already action packed game. Perhaps the more seasoned of veterans would relish the challenge.

The overall problem I had with the fighting mechanics was that you’re only really assigned to one HP move. There are more to unlock through character progression either online or offline, but you are resigned to the fact that battles turn into a little bit of a button mash-a-thon and therefore makes grinding a chore. Not exactly what you want to find in a fighting game and it’s an element that really lets Dissidia down. While you have to admire Square for keeping the game grounded in RPG roots, you can’t help but feel a few more combos or at least having a mix and match system would have gone down a little better.

The other gripe I had was the overall pacing of the matches. I understand Dissidia is a fast moving game in combat and in a one-on-one scenario, it worked beautifully. While the combat is fluid and flows like a dream, with other players flying around the map, summon crystals appearing and about a million things flashing before your eyes, this makes the battles as hyperactive as giving a 6 year old child several cans of Red Bull, a tub of sherbert and a gram of speed for good measure. There were moments I lost matches simply because I was distracted by so much going on the screen that I kept losing focus. A one-on-one setting is all well and good, but 3-on-3 was a little too much.

You may be forgiven for thinking that the main menu is lacking in options, compared to other games in the fighting genre. You have the usual online modes, arcade modes, or as it is known as here, Gauntlet Mode, which entails 6 matches where your skills – or rather how good your button mashing skills are put to the test, in order to unlock various goodies, new moves and perks for your party. Then there is the story mode, but don’t just assume you can jump on story mode, finish it in record time and send the game back to your local trade in. 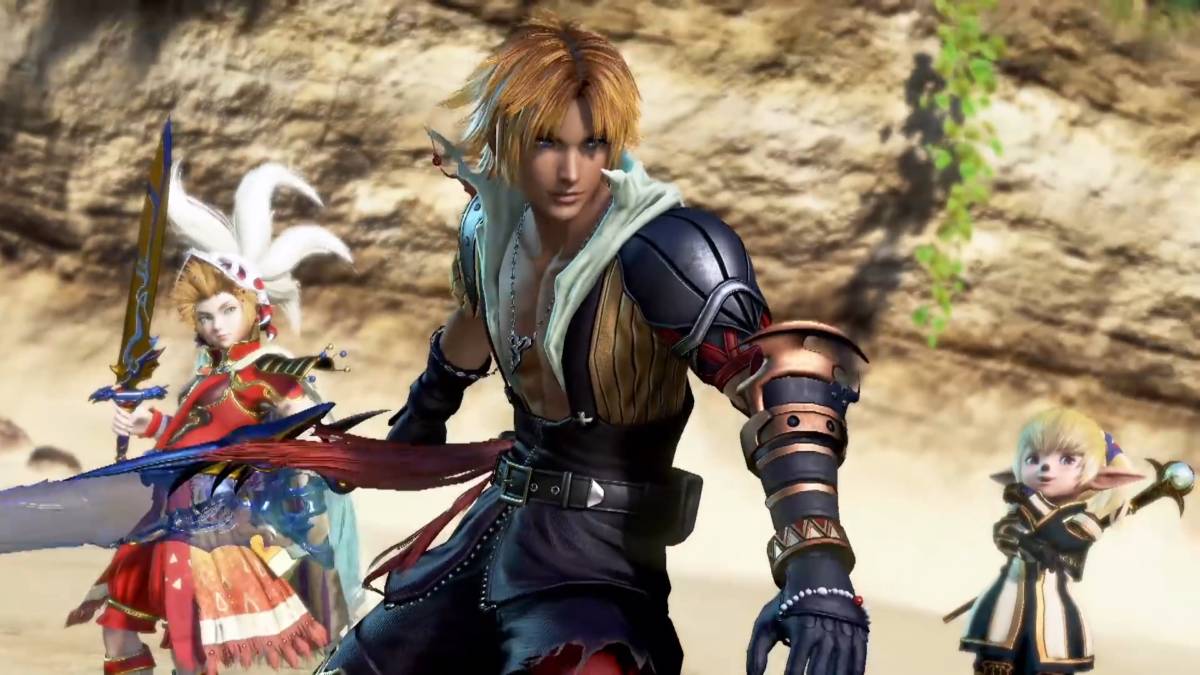 The story mode includes an element call “memoria” and the only way you can gain said material is through levelling up either your online or offline rank through ranked matches or gauntlet mode. To begin with I was a little bit annoyed at this element as personally; I thrive on a story mode. However, as I took the time going through gauntlet after gauntlet, going through each character and levelling them up, beating my high score to unlock more goodies and cosmetic options, I began to understand the method behind this madness.

Square Enix and Team Ninja really want you to get to know the game, maybe even grow to love it for all its interesting quirks. It’s like visiting your grandma’s house and having to eat your brussel sprouts before you can enjoy the sticky toffee pudding. It’s a chore, it’s a grind, but deep down you know it’s good for you and makes the spoils of war much sweeter. However, the fact I needed to unlock 7 memoria just to get through the beginning cutscenes, which were brief, did annoy me at the hard work squandered.

Square, let’s be blunt, we’re Final Fantasy fans. If there’s one thing we can endure, it’s your mercilessly long cutscenes. Perhaps Square were trying to hide that Dissidia’s storyline could probably be viewed and played within a couple of hours. The intention is admirable, but if I’m grinding away 6 matches at a time to unlock more memoria along with frilly outfits for Noctis for an hour or two, all to be greeted with cutscenes before any fighting can take place, then it makes me wonder if perhaps better time would be made if I just played a traditional Final Fantasy game.

Although, there is one tradition Square has kept – a vague and confusing plot. Without trying to spoil too much, the game takes place years after the events of Dissidia 012. The eternal war wages on only this time between the goddess of protection, Materia and the god of destruction, Spiritus. Both hero and villain alike are bewildered into why this war is happening and have agreed to settle their differences to investigate and fight, for lack of a better word, carbon copies of themselves that were left behind in the previous war.

Dissidia was a unique experience for me. What they gave in one hand they were not afraid to taketh away in the other, only what they took away was small and it didn’t completely ruin my experience. Fans of the PSP games will get a tremendous kick out of this and while newer fans may find the control scheme a little daunting to grasp with, they will get into the swing of things very easily.

Verdict
Despite its repetitive nature and vague plot, there’s a lot of fun to be had with Final Fantasy: Dissidia NT that both fighting and RPG fans will appreciate, providing you turn the Moogle off.
8