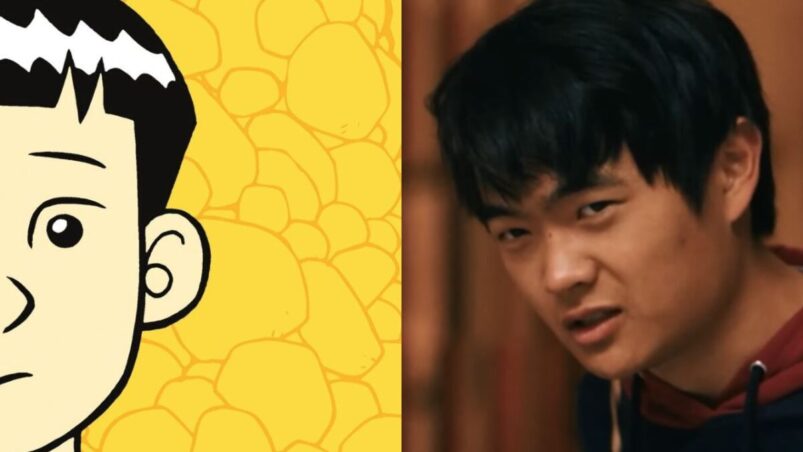 On Sunday, Disney gave us the first look at their adaptation of the acclaimed graphic novel American Born Chinese in a production featurette. It showcased some behind-the-scenes leads and a couple of actors discussing the show and the sense of direction it will take. It also confirmed that the adaptation will be an 8-episode series coming to Disney Plus.

While some of the names of those working on it are certainly accomplished, there wasn’t anything shown or discussed in this first look that gives me hope it’ll do the book justice. The original graphic novel is quite possibly the book with the most impact on my life, but I’m pretty underwhelmed with what Disney has shown so far.

American Born Chinese is an Eisner Award and Printz Prize winning 2006 graphic novel by Gene Luen Yang. It follows three concurrent stories: Jin, a Chinese-American boy just trying to make it through high school without incident, Danny, an all-American boy who has his perfect life interrupted by his embarrassing Chinese cousin, and Sun Wukong, the Monkey King, in a retelling of the beginning of the Chinese literary classic Journey to the West. The stories are unified in their theme of each protagonist trying to find belonging and self-acceptance of their own cultures and backgrounds.

The featurette spends its short time focusing on the magical, “badass” action, and folklorish aspects of the story while also touching on playing up the superhero feel of Sun Wukong. They also mention that the heart of the tale will be the friendship between Wukong and Jin. I’m incredibly excited to see American Born Chinese, or really any Gene Luen Yang work, adapted for a wider audience. I just wish that any of the things describing Disney’s vision were remotely what American Born Chinese is even about.

A distinct kind of isolation is at the core of the American Born Chinese graphic novel. It’s about the “American identity” and the massive struggle that first-generation immigrant children (that being the children of parents who emigrated to a country and grow up in a place their family never did) like myself have to deal with while also coming of age and doing so feeling uniquely alone. You’re never “American” enough for Americans, and you are never “other” enough for your cultural origins – whether that’s Chinese, Latiné, Indian, or whatever, and it’s rare to have someone close that has gone through the same thing to provide guidance.

It’s a horribly honest story that wasn’t normally on bookshelves in 2006. It’s a coming-of-age story that resonated with me on a molecular level, one that I wish someone had written for me when I was a kid failing to figure out how all the races and cultures in me were supposed to mix. I’m at war with all that to this day.

The magic, action, and folklore are all mostly restricted to Wukong’s story in the graphic novel, and the fighting takes place across maybe five pages total. There are no friendships that give any of these characters ease. The “fight” is painstakingly shown to be individual, within the self, and against cross-cultural expectations. The most comic accurate thing in the whole featurette is a blink-and-you-miss-it shot of someone holding a Transformers toy.

In addition to Disney possibly removing or glossing over the raw nature of the original, there’s a huge focus on pulling in other characters from Chinese folklore. This is a common element in Gene Yang’s other works, but there are only two or three that feature in American Born Chinese.

In fact, Michelle Yeoh’s character seems to be dressed identically to Yang’s version of Guan Yin, a goddess featured in a completely different work of his, Boxers & Saints. There’s a shot of Jin possibly getting on a basketball team, which never happened and may be a reference to Yang’s pseudo-memoir Dragon Hoops. Wukong seems to take human form and go to high school, which rings like Yang’s most recent venture over at DC Comics, Monkey Prince. This feels more like a concept compilation of all of Gene Yang’s works and less of a sincere American Born Chinese adaptation.

I hope to the gods I’m wrong and just a little upset that the adaptation doesn’t feel the same as the book. It isn’t a long first look, so I pray there’s lots more to see. I truly want this to do well and have Gene Luen Yang get the flowers he’s long deserved from the mainstream. But American Born Chinese is too important a story for it to be told the way this teaser shows.

The final words of the featurette linger on presenting the Disney “magic,” but the original story to me was a magic killer, demystifying the idea that no one cared about the voices of Americans born in America struggling to be called American. Asian-Americans, other children of immigrant families, and the Monkey King himself deserve better than what might be another sanitized Disney property.

READ NEXT: Ranking The Dynasty Warriors Games From Worst to Best