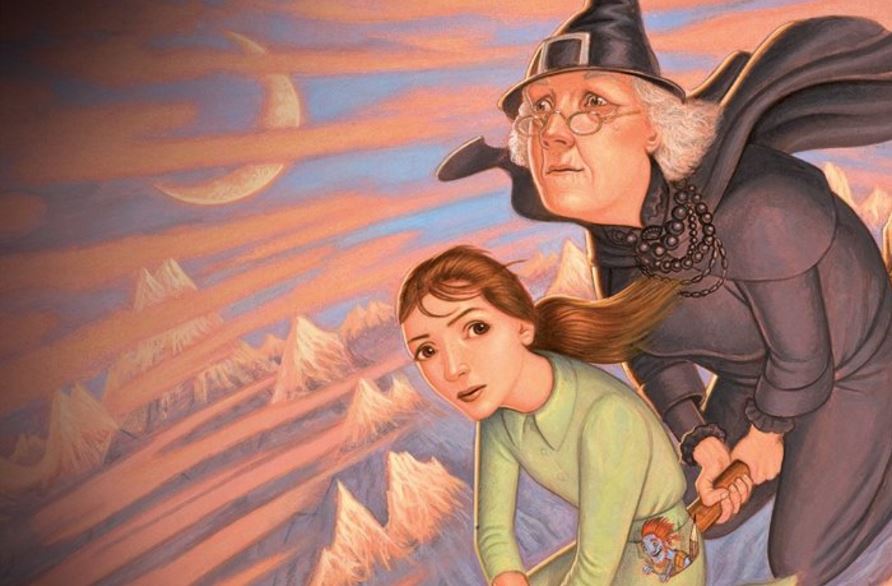 You might remember from my ‘The Wee Free Men’ article that I was raving about Tiffany Aching, the Nac Mac Feegles and the magic of Discworld distilled for kids. ‘A Hat Full of Sky’ follows on pretty much directly from that first book, in some of the most coherent and clear cut plot continuity that the Discworld has produced so far.

Tiffany is an official apprentice witch, travelling away from the Chalk and into the big, wide world; she is going to learn her trade from a more senior witch and hopefully eventually be ready to bring it back home. This direct and no nonsense continuation of the story is another benefit of writing for children, I think; where before you may have had ambiguity, here there is no room for such things.

Reading this book, I couldn’t help but wonder if Sir Terry ever looked back at some of his earlier Discworld novels and thought about the occasional slips in clarity, especially from the first three books, and what he could have done about them if he had the chance. Maybe it was nothing and that’s fine; we all write on a learning curve, of course, but it is interesting to consider.

‘A Hat Full of Sky’ concerns itself with another monster fighting episode as the plot – the Hiver, which inhabits people’s minds and changes them is much scarier than the Queen from ‘Wee Free’ – but the themes being introduced are very much in the vein of the other Witch novels.

Early on, Miss Tick tells Tiffany that witches fear ‘going to the bad’, which we all know is Granny Weatherwax’s greatest anxiety, and the Hiver is a neat way to explain this concept to younger readers. When the creature gets a chance to inhabit Tiffany, it makes her a cruel and manipulative; she steals money from an elderly man, turns a shop clerk into a frog and bullies her contemporaries.

Later on, when Tiffany confronts the creature, we discover the Hiver only gives people what it can see in their imaginations, the things they might do if they were pushed far enough. The Hiver isn’t a bad creature, just as Tiffany isn’t a bad person, but it shows that everyone has the potential for bad. Granny Weatherwax has never been easier to understand than she is by the end of this novel, in which she barely features.

I also have to mention the Nac Mac Feegles again here. They’re still tiny and angry and drunk, but they are also growing into characters worthy of the consideration given any other main player in the Discworld. We get to spend time with Jeannie, the new kelda of the clan and wife of Rob Anybody, the rambunctious but well-meaning Big Man. Jeannie is a modern and forward thinking young woman; not content with being the only Feegle able to read and write, she insists that Rob and the rest of the men learn. At first, she is nervous of Tiffany’s presence in the life of the clan and perhaps even a little jealous – don’t forget that Tiffany and Rob were technically engaged for the few days that she was the emergency kelda – but she eventually insists that Rob take the boys and go to save Tiffany from the Hiver. When Rob laments that Tiffany cannot be having a good time, so far from home and the things she knows, Jeannie replies that she knows. She is, more than anyone, able to understand Tiffany’s plight. Once keldas lead their own clan, they can never go home.

I also want to talk briefly about Rob in his own right. He’s willing to do anything for Jeannie, even learning the letters that scare him so much, but he does not forget what he and the others owe to Tiffany. It is his idea that they go to help with the Hiver. When the Feegles step into Tiffany’s Hiver infested mind and find that the part of her which is still Tiffany is shrinking, Rob sends the others back to get the items required to get rid of the creature. Rob stays though, watching for the creature, because he does not want Tiffany to die without someone at her side. It’s a big idea, for a book aimed at young readers, and one that very much endears Rob as a character who is more than his stereotype. Pratchett had real skill with these beats of humanity, of course, and I am very glad to see that they have not been forsaken in a book that some could dismiss as ‘just for kids’.

“Once we were blobs in the sea, and then fishes, and then lizards and rats and then monkeys, and hundreds of things in between. This hand was once a fin, this hand once had claws! In my human mouth I have the pointy teeth of a wolf and the chisel teeth of a rabbit and the grinding teeth of a cow! Our blood is as salty as the sea we used to live in! When we’re frightened, the hair on our skin stands up, just like it did when we had fur. We are history! Everything we’ve ever been on the way to becoming us, we still are… I’m made up of the memories of my parents and my grandparents, all my ancestors. They’re in the way I look, in the colour of my hair. And I’m made up of everyone I’ve ever met who’s changed the way I think.”