Destroy All Humans! (Xbox One) REVIEW – Resistance Is Futile

Crypto's back, and better than ever. 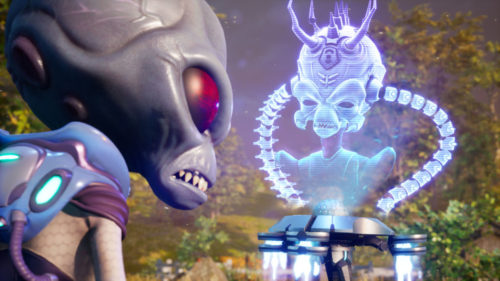 THQ Nordic appear to be doing alright for themselves when it comes to remaking or remastering classic titles. Over the past few months alone, they’ve been responsible for the likes of Saints Row: The Third – Remastered, SpongeBob and now Destroy All Humans, which is a faithfully crafted remake of Pandemic’s fondly remembered humanity annihilation simulator.

One of the PS2 and original Xbox’s most beloved games, Destroy All Humans saw you terrorise 1950s America as one of the Furon Empire’s greatest warriors, Crypto-137. Players move from one invasion site to another, probing and extracting brains and DNA from coast to coast, all the while dealing with a secret human organisation that have their own nefarious plans for the fate of humanity. 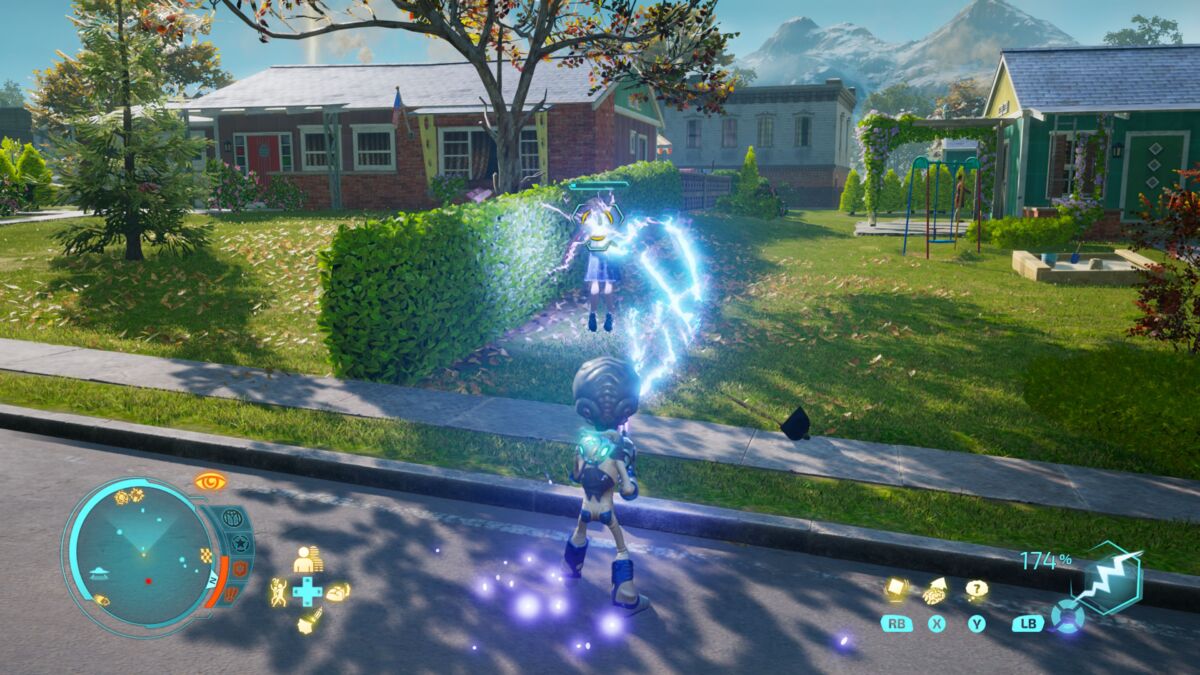 Anyone who played the original version of the game will feel right at home with this remade version. If anything, Black Forest has managed to create a version of Destroy All Humans that lives up to the nostalgic version of the original game that exists in your head. Let’s be honest here, the original game was janky, and had a lot of flaws that made the game more frustrating than it needed to be. For the most part, the new version retains everything you’ll love about the original game, but with a host of necessary updates, improvements and brand new additions.

For starters, the graphics are great, though you may not like the human models that look like they just walked out of a Night at the Museum film set in Madam Tussauds. At the very least, the textures and lighting look beautiful, especially on the One X. The animations seem to have been improved, even if only a little bit, but the majority of the voice lines and dialogue are 15 years old, and will become annoying after they’ve been repeated for the hundredth time. 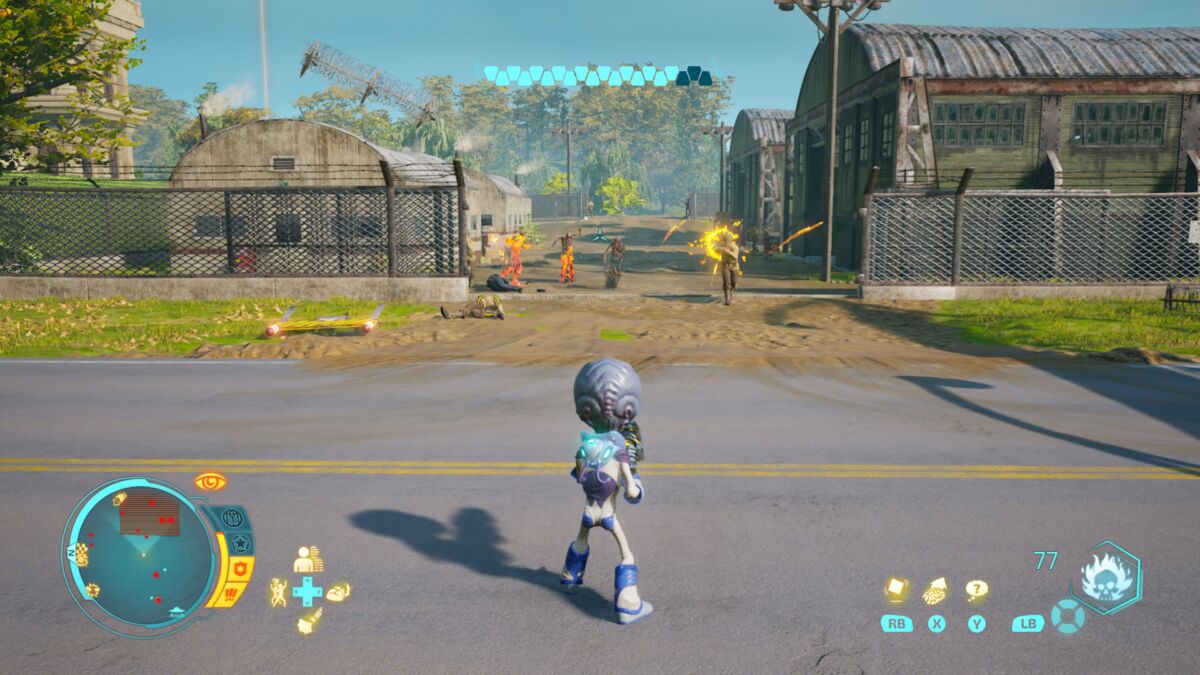 The gameplay is where you’ll see the majority of Destroy All Humans’ improvements. For the uninitiated, players take control of their invasions from the ground and the sky, utilising Crypto’s weaponry, mind powers and Holobob disguises while on foot, or decimating civilisation from above with the much less subtle flying saucer.

Missions will see players alternating between the two, with a surprising number of missions in a game called “Destroy All Humans” requiring you to remain undetected and not murder everyone in the immediate vincinity. That might turn off some players looking for wall to wall carnage from the “Press Any Button” screen until the credits roll, but the stealth missions make a nice change of pace between the wanton slaughter. 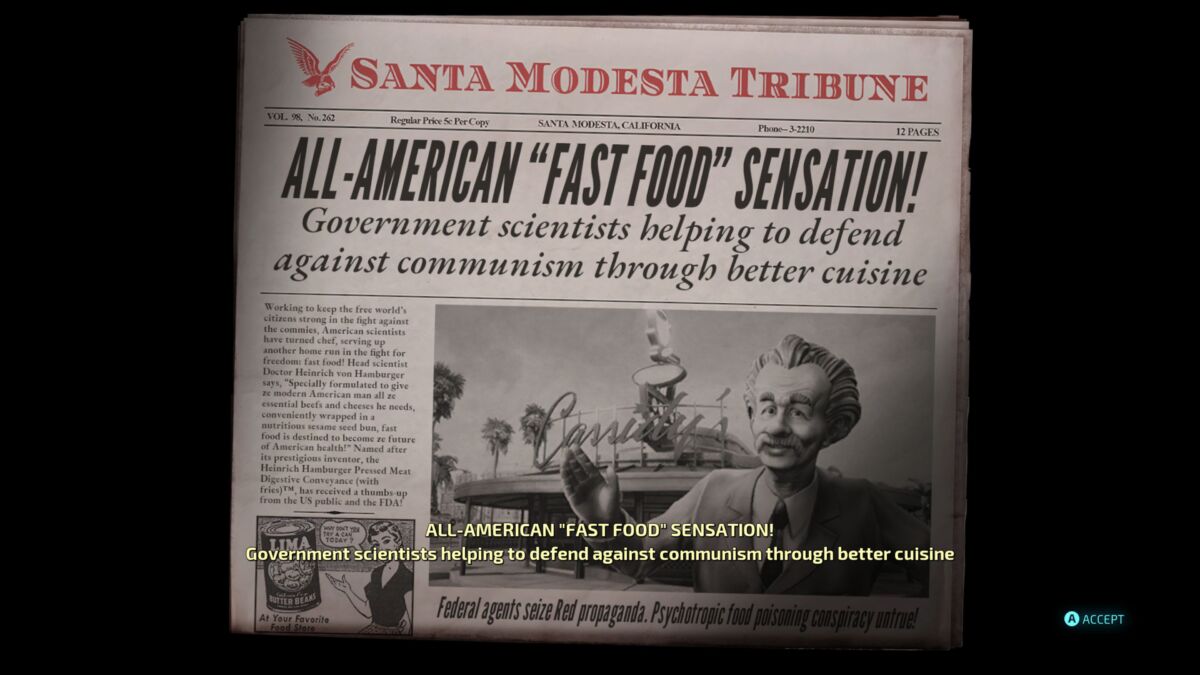 This should sound familiar to anyone who played the original game, but Black Forest have introduced a smorgasbord of gameplay updates that bring the experience into the modern era, the most notable being the brand new mission, The Wrong Stuff. Originally left on the cutting room floor during the original game’s development, the mission sees Crypto infiltrate a military base to sabotage the creation of an experimental jet plane.

The fact that Black Forest managed to take a mission that was initially deleted and include it in the remake proves that this is the definitive version of Destroy All Humans, and in all honesty, it’s a pretty fun mission. It clearly takes its cues from the likes of Hitman, as you engineer some “accidental” assassinations of the military’s top brass, but again, it makes a nice change when you consider its bookended by missions focusing on wholesale slaughter. 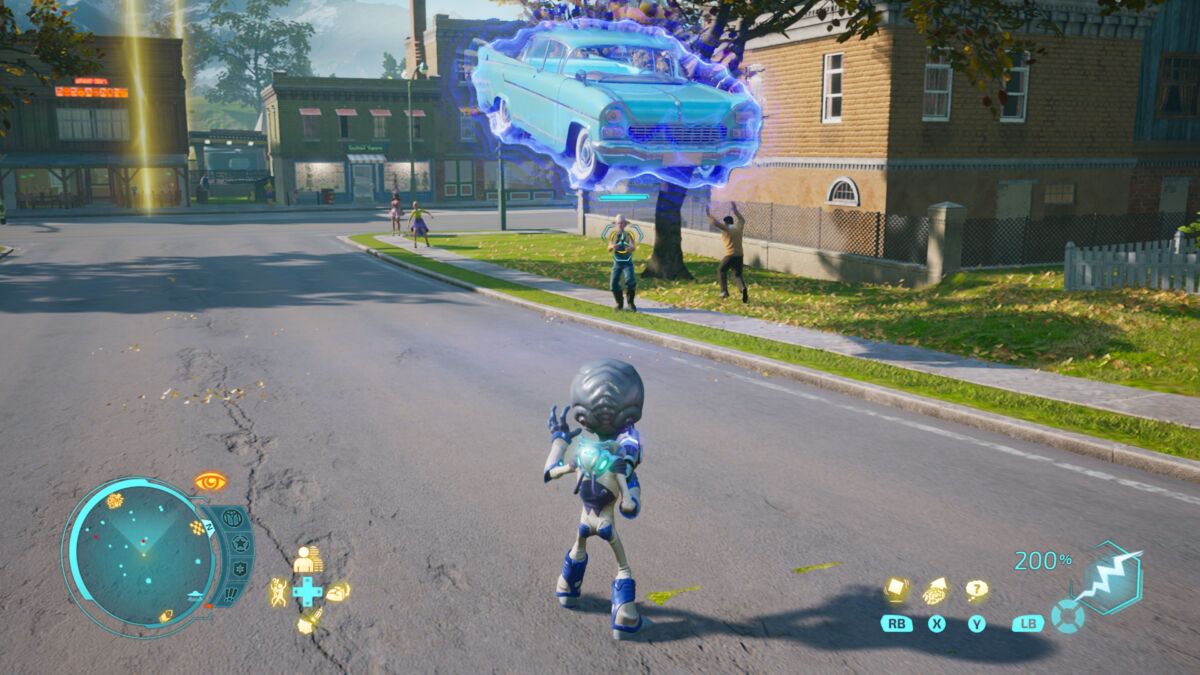 The additions also extend to Crypto’s abilities. One of the most immediate benefits is that players can now multitask between shooting and using mind powers, making you more deadly as a result. Your shield will recharge if you extract a human’s brain, but doing so in the original game was a fiddly experience. Now, you can mash X when highlighting a human to take their delicious gray matter, all the while massacring the local law enforcement.

Crypto’s Holobob ability has been given an upgrade too, allowing players to jump and collect items while disguised. His Follow ability has also been improved, as police officers and soldiers can be commanded to protect you instead of just aimlessly following behind you. They might not sound like the biggest of additions, but they’re quality of life changes that make the game less of a chore to actually enjoy. You can even restart missions from a checkpoint instead of going straight back to the beginning of the level. Isn’t it amazing what games can accomplish in 2020? 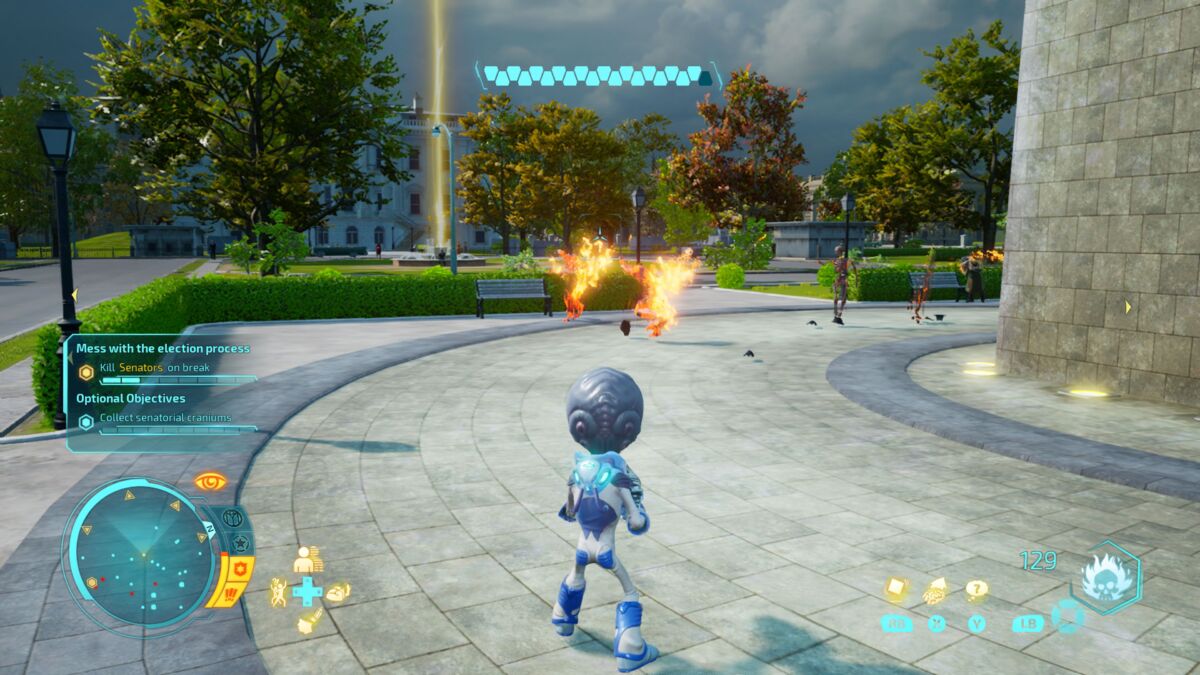 Perhaps the most effective new ability Crypto has is the evade, which gives him a short dash that can get him out of a spot of bother. It doesn’t sound like much, but there are upgrades that can turn it into a hoverboard-like feature, allowing Crypto to zoom around the map at a decent pace.

They’re even called S.K.A.T.E. upgrades, and about the only thing missing is Superman by Goldfinger or Guerilla Radio by Rage Against The Machine playing in the background. If Crypto isn’t in the new Tony Hawk’s game, we riot. It’s an upgrade that makes traversing the levels feel much more satisfying, particularly when you upgrade the ability so you can dash infinitely. Between the S.K.A.T.E. upgrades and Crypto’s ever-present jetpack, you have so much more freedom of movement at your disposal. 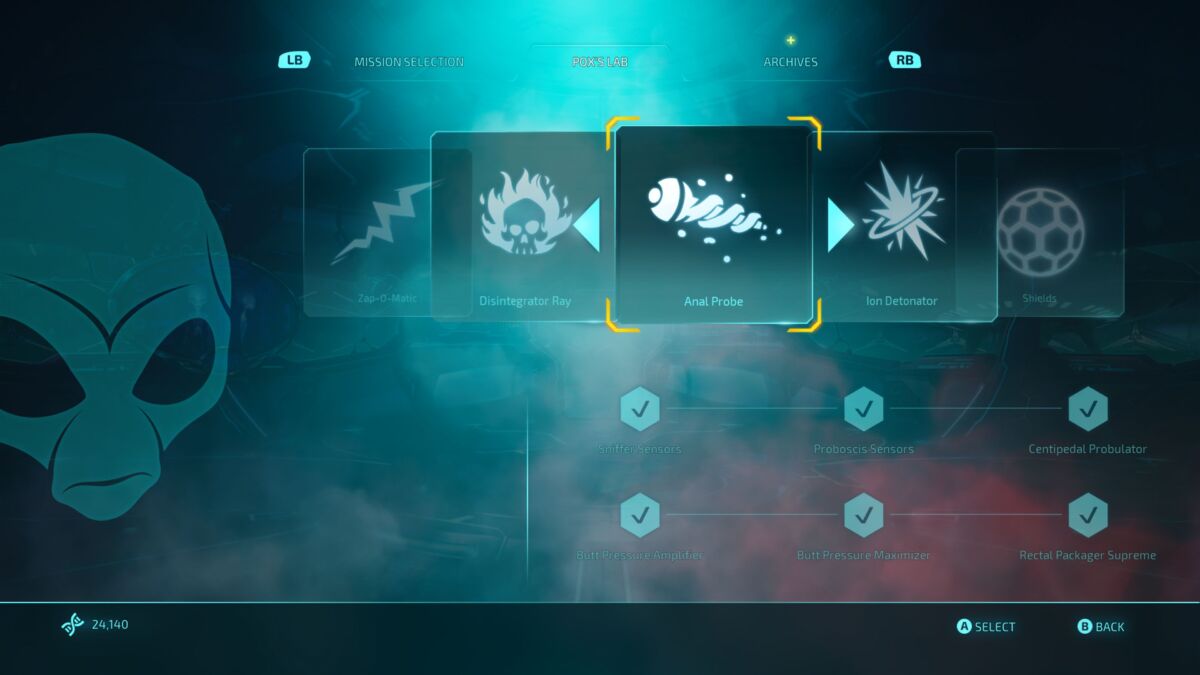 On an additional note, there are way more upgrades now too, with 66 upgrades across all of your weapons, abilities and saucer, as opposed to the 18 in the original game. These upgrades range from your basic health, damage and ammo boosts, to more unconventional upgrades such as extracting someone’s brain causing a chain reaction in surrounding humans where their heads explode after a certain time. That can even be upgraded so that those under the effects of the chain reaction will be brainwashed into protecting you before they die, leading to some hilarious encounters.

In order to claim these upgrades, you’ll need Furon DNA, and ordinarily you’d have to spend your time plucking it from human brains, but the remake has added plenty of new ways to earn more DNA. Each main mission has some bonus objectives that, if completed, will net you some more of that precious upgrade juice. These can range from not being spotted, killing enemies in certain ways or completing an objective without touching the floor. They do add an extra challenge to the core game, but they’re not too difficult to complete, so they’re worth making the effort for. 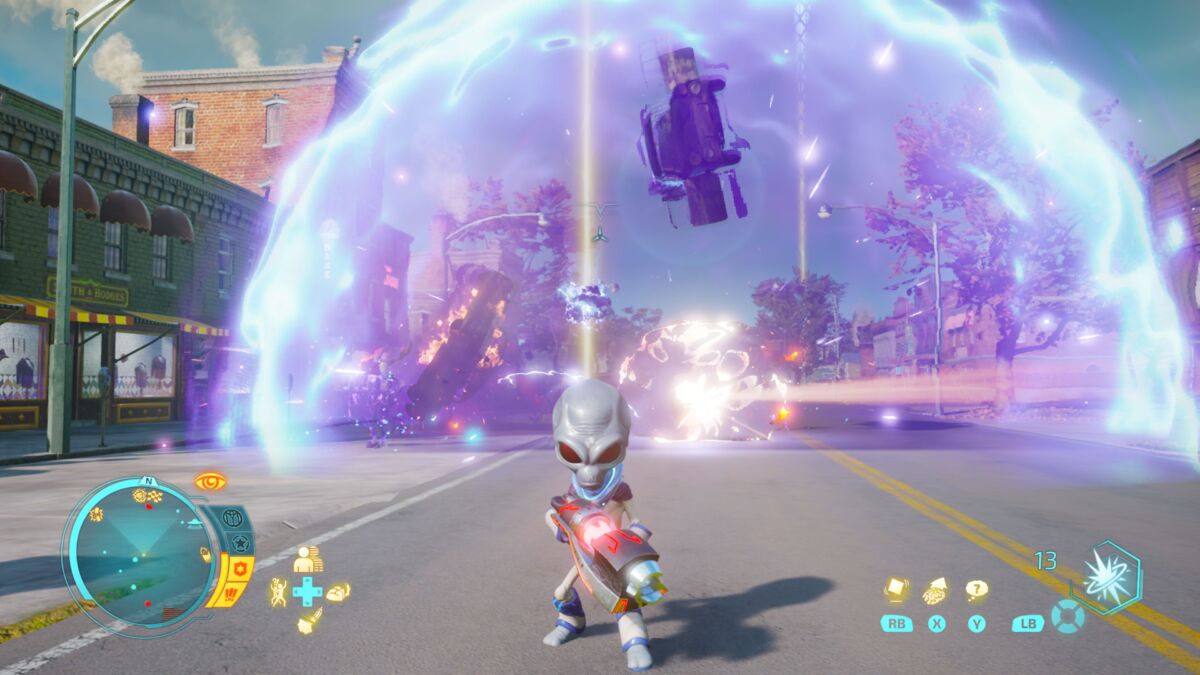 On top of that, players can revisit invasion sites outside of missions to complete bonus challenges, or just generally to muck about and cause some chaos. The challenges include Abduction (yeet things into a giant beam), Rampage (rip and tear), Race (collect drone pieces as quickly as possible) and Armageddon (get in your saucer and turn the town/city into a shot from Independence Day).

Some of the challenge types land better than others, with the Race events making brilliant use of Crypto’s new S.K.A.T.E. ability. Meanwhile, the Abduction and Armageddon challenges felt like they were determined more by luck as opposed to any skill the player had. For Armageddon, you receive more points for draining key targets instead of blowing them up, but they could spawn on opposite ends of the map, meaning you’ll spend more time travelling between high value targets, costing you a 3 star rating as a result. 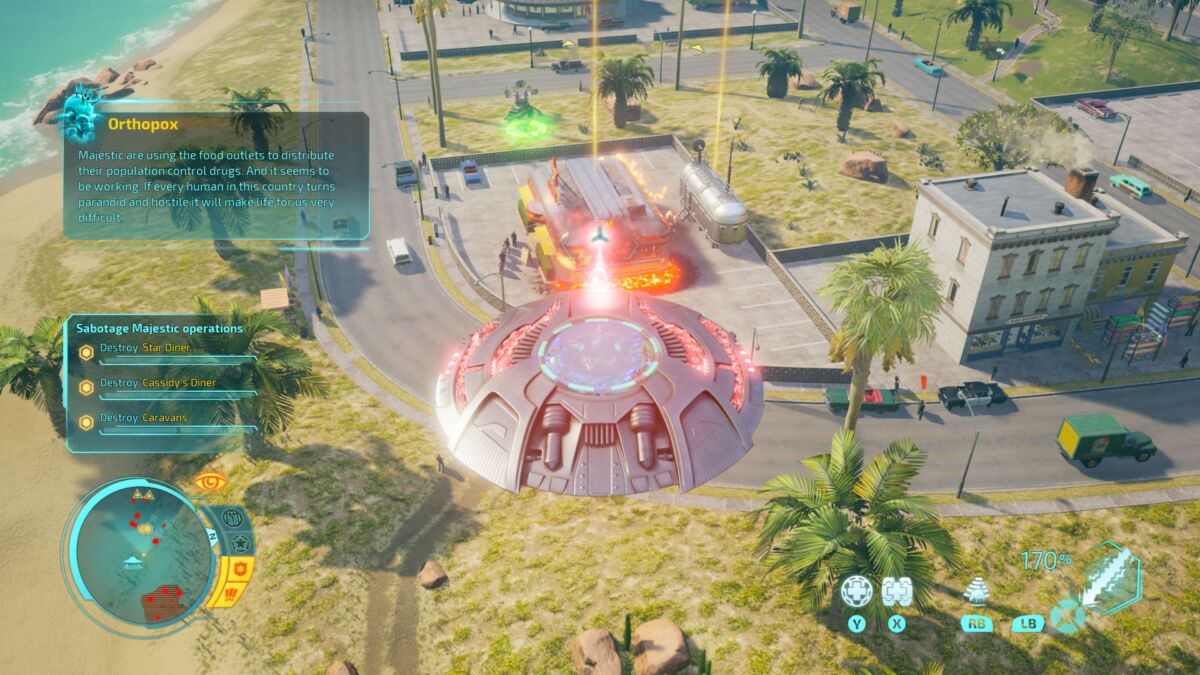 The Abduction challenges also felt dictated by spawn placements. One such challenge, which took place on the Area 42 map, gave me wildly different enemy placements every time I attempted the challenge. While purchasing upgrades is generally a good way of ensuring you do better at a challenge, there are some that just feel like they require good fortune rather than any cohesive strategy.

Destroy All Humans also retains parts of its jankiness from the 2005 version, particularly with regards to Crypto’s Psychokinesis abilities. Human bodies have a bit of a tendency to glitch out when thrown, and the PK combined with the game’s camera can lead to a lot of objects trapped behind walls. The lock on feature is a bit of a pain too, often targeting the wrong enemy or object that you intended to lift, and the framerate can stutter when the action gets a little too intense.

The new mission I talked about earlier also appears to hold the lion’s share of the game’s problems, at least from what I experienced anyway. Infiltrating the base was made harder by the fact it didn’t give me visual indicators that I could open the gates, or where the commanders were that I had to brain scan in order to trigger the next objective. It felt like the most haphazardly put together mission, which is a shame because it’s a mission with lots of potential. A later playthrough of the level after finishing the game was much more successful, so perhaps you’ll be fine if you pick the game up at launch.

Occasional ropey-ness aside, Destroy All Humans is a fantastic remake of a cult hit from two generations prior. Fans of the original game will be happy to see everything they love is both intact and improved, while players who never got on board with the Furon Empire’s decimation of the human race can consider this the perfect opportunity to kneel before their new, less-than-benevolent overlords. 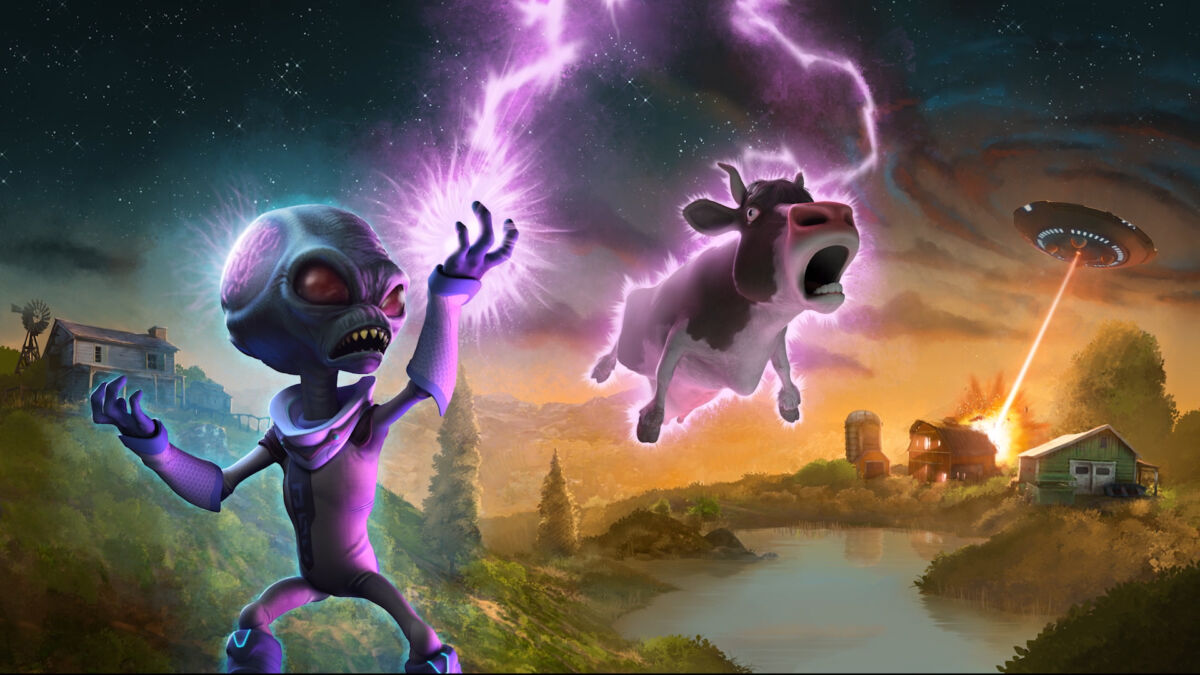 Verdict
The Destroy All Humans remake takes everything players loved about the original game and refines the formula, making it more enjoyable for fans and modern audiences alike.
8
Cultured Vultures is a pop culture website established in 2013 covering all things gaming, movies, and more. We eat your words.
All The News On The Biggest Games