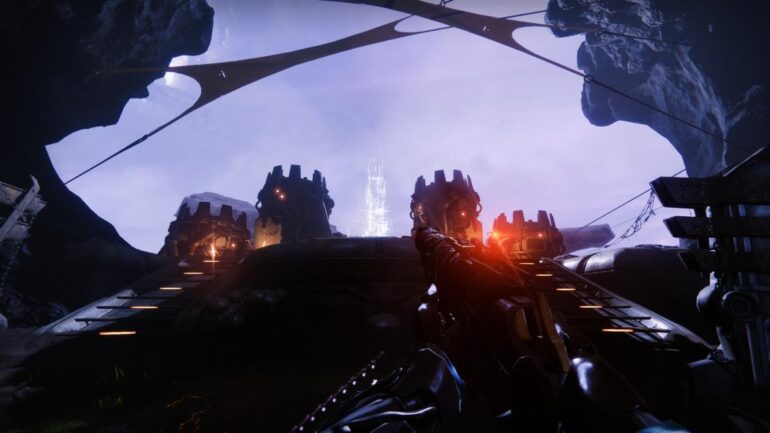 As of Tuesday evening, Reddit user Beastmaster_69 came across a Vex Conflux, a tower-like structure built by Destiny’s race of time-traveling robots the Vex, in the Kingship Dock Lost Sector on the Tangled Shore. Some scattered reports also confirm the existence of a second Conflux appearing on the Tangled Shore zone, but nothing happens when attempting to interact with this one.

The Raid Secrets subreddit and Discord communities are currently hard at work solving a new puzzle that seems to involve this Conflux. When a player interacts with the tower, several Vex enemies known as Oracles will spawn. The puzzle involves shooting them in a specific sequence to unlock something. It isn’t known what the “correct” sequence is right now, but there are 120 possible permutations to shoot the Oracles. Players are being greeted by a Vex Minotaur with every possible combination upon executing it, but as of right now there are only clues as to what this may lead to. If previous Destiny ARGs are anything to go by, this could lead to story developments or even a new hidden mission and quest for players.

Since the Season of the Chosen, Bungie has chosen to not fully disclose the full content schedule after player complaints of being spoiled finding secrets. Now players dedicated to finding their secrets are left wondering what else could be hidden out there. Some dataminers have discovered possible content (Warning: Major spoilers for Season of the Splicer within) that we won’t be seeing until after the Vault of Glass reprised raid opens to all on May 22nd, but only time will tell.

That’s not the only juicy tidbit to add. Yesterday, several prominent YouTubers that broadcast Destiny content such as FalloutPlays, Professor Broman, MyNameIsByf, and Aztecross had received pieces of a video that seem to form pieces of a larger picture. The communities of all of the YouTube and Twitch streamers quickly banded together and solved this puzzle to reveal a secret emblem code for players to unlock.

To use the code, log into your Bungie.net account and go to the Redeem Code page and input the following code: 7D4-PKR-MD7. This will reward you with the Sequence Flourish emblem for your character on your chosen platform.

That’s all in terms of secrets that are being discovered as of the time of writing, but more content will likely be found in the coming days and weeks as the plot unfolds in Season of the Splicer, which is shaping up to be Destiny 2’s most story-rich season yet.