Deadly Premonition 2 And How to Love a Janky Game 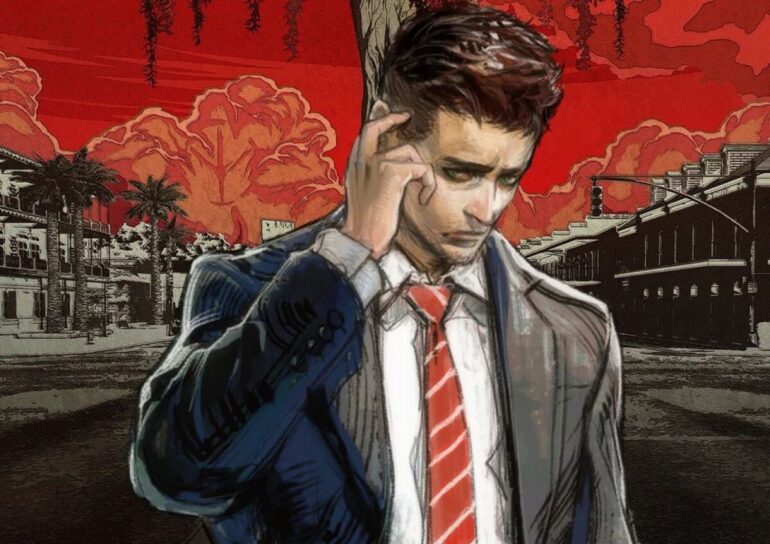 Deadly Premonition 2: A Blessing In Disguise, the long-awaited sequel to 2010’s cult hit Deadly Premonition (called Deadly Premonition: Origins in the Switch eShop), is a survival horror detective game that cuts back and forth between 2019 and 2005, as you follow FBI agent Francis York Morgan’s efforts to solve a mystery in the past and investigate the case’s strange reopening in the present.

It wears its surreal, Twin Peaks-esque absurdity on its sleeve, with a world full of idiosyncratic characters, grotesque boss fights, and a loopy sense of humor throughout. But what’s really special about Deadly Premonition 2, and the reason that brings us here today, is that Deadly Premonition 2 plays like it doesn’t care whether or not you’re having any fun.

The game’s technical performance struggles have been well documented — it often struggles to maintain a double-digit frame rate, especially in the game’s outdoor sections. Animations are buggy and choppy, and the whole thing looks like it’s meant to run on the Nintendo GameCube without straining the hardware. In terms of narrative, it also had some controversy at its mishandling of its trans character, deadnaming her extensively and depicting the character in question in a generally tone deaf way. We won’t dive into that controversy here because developer Swery has issued a statement resolving to issue a story patch to fix this representation. The patch was implemented in early August, and also made some performance updates to relieve some, but not all, frame rate issues.

Swery’s wise choice to issue a statement to admit his mistake in handling the trans narrative, but, not in regards to the game’s patchy visuals, tells us a lot about the game’s priorities. First, that, rightly, the depiction of real human perspectives and experiences, particularly a marginalized and oft maligned identity in both pop culture and in reality, is far more important than how good virtual trees look. And second, while these hurtful narrative elements can receive a facelift, the choppy, janky elements of Deadly Premonition 2 are, on some level, part of the intended experience.

The entire experience of playing DP2 might be summarized as ‘uncanny.’ It is the image of an open world game, but the image is faulty, almost like a tracing of a famous drawing. Aiming is a nightmare, Morgan seemingly always ready to aim his gun exactly where the enemies aren’t. When traversing the city, bumping into a curb can completely stop your movement. Dropped items are only discernible as a slight glimmer on the ground. To play DP2 is to constantly reckon with what you know about playing video games, because none of these systems are technically wrong, they just aren’t quite right either.

This subtle but unmissable gap between expectation and execution creeps into the narrative of the game as well. You fight enemies with a gator tranquilizer gun instead of a regular gun. Agent Morgan jets around the fictional New Orleans-adjacent town of Le Carré on a skateboard, because someone stole his car before the game begins. Character dialogue calls out the arbitrary video-gameness of the world around you. With characters dropping the games title in conversation twice, (quick wink at the camera), Morgan at one point mentioning a pair of other FBI agents could be the lead of the hot new video game (slow wink at the camera), and later lamenting the string of pointless fetch quest he, and you, must embark on to move the story forward (less a wink to the camera and more a sympathetic hand on the camera’s shoulder).

The game frequently takes a detour into the medium of a visual novel, wherein your only input is in selecting dialogue choices, and you will at times go up to half an hour without doing anything other than watching an episode of this virtual season of True Detective. At the very beginning of the game, when you first get the prompt to tilt the control stick to move your character forward, it doesn’t actually matter what direction you push the stick— you can pull it back and the character will still walk forward, then left, and around a corner, all like they’re on a railroad track. Your input is superficial — the game doesn’t really care if you feel in control.

So what’s the point of all of this? Why make a game that has so much friction between its form and function? To answer that, we may need to consult a German playwright and theorist Bertolt Brecht. A pioneer of a style of theatre called Epic Theatre with his collaborator Erwin Piscator, Brecht believed that popular theatre had gotten away from its didactic routes, and popular shows full of spectacle and style were doing more cultural harm than good. To Brecht, a work of art should first educate its audience, and while that education can surely be entertaining, as his shows are full of music and comedy, the ethos and ideology must be its first priority. To accomplish this education, a responsible and attentive audience should see the construction behind their entertainment. They should see all costume changes, see all the strings showing that hold up the special effects, see every lighting implement and never forget for a moment that what they’re seeing is constructed. In his own words: “Art is not a mirror held up to reality, but a hammer with which to shape it.”

One of Brecht’s favorite words for this effort to show the strings is Verfremdungseffekt (bless you), which roughly translates to “alienation effect,” or more literally, “the art of making things strange.” To make his plays strange and “alienate” his audience’s immersion, Brecht would have characters outright state how a scene would end and who would die, write characters that refused to be sympathetic or likable, and make sure that every was understood as an ideology first, and a character a distant second.

DP2 likewise seeks to alienate us from the glitz and immersion of modern blockbuster gaming. Whereas The Last of Us Part II gave us a massively ambitious sequel and a story about the horrors of revenge and the terrible consequences of violence, Deadly Premonition 2 gives us a Preacher who won’t help you on your quest until you give him a can of spam, and a quest to go bowling at the local diner so you can have an epiphany from how the pins land. This is how you solve a murder and stop a serial killer. The characters in DP2 want to be characters in a video game, and nothing more. They are cardboard signs with the word ‘Quest Giver’ scrawled on it in magic marker.

You cannot escape a quintessential ‘video game-y’ feeling in every jittery, glitching frame of Deadly Premonition 2. Earlier I joked that this game was designed to run smoothly on a Gamecube, and that statement might be truer than it appears: This is a game that has stripped away so much of what it is to be a video game in 2020. There’s no possibility of DLC, or microtransactions, or emotionally stunning motion capture. There is an FBI guy you control. He has a gun. There are bad monsters to shoot, so you shoot them. Doing a headshot gets you money. Just like the game bounces back and forth from 2019 to 2005 as Agent York remembers the case from his past, so too do we bounce between our present selves, and the games we used to play, when the world appeared simpler to us. It wasn’t, of course, but when we were younger, we didn’t know what reality and adult life was yet.

This doesn’t mean Deadly Premonition 2 is a nostalgic game. It’s the opposite: By invoking the design and play style of the games of a bygone era, it shows us how far we’ve come, technologically, and socially. While the execution could have been better, a trans character has a sizable role in DP2’s story, something that would have been harder to do (and likely with even worse execution) in the mid-2000s. For York, and for the player, this game is about juxtaposing our naive past selves with our current, more experienced present.

Even though this description might have made Deadly Premonition 2 sound like a punitive slog through outdated game design, there’s one other thing to understand: Because of all these janky elements, because of the exaggerated world and characters you explore, because it is willing to have your cool, quirky FBI agent traverse the world on a skateboard, Deadly Premonition 2 is still fun, even with all its alienating aspects. It’s definitely an acquired taste, like the epic theatre of Brecht, which also calls for you to enjoy its open-handed aspects and rejection of more entertaining norms. And even though the pain and danger of nostalgia is one of the game’s chief thematic concerns, the sensation of playing something that feels like it came straight from a wormhole to the year Pscyhonauts and Resident Evil 4 came out does spark a glimmer of joy.

Musician and artist Brian Eno has a famous quote about outdated technology: “Whatever you now find weird, ugly, uncomfortable and nasty about a new medium will surely become its signature. CD distortion, the jitteriness of digital video, the crap sound of 8-bit – all of these will be cherished and emulated as soon as they can be avoided. It’s the sound of failure: so much modern art is the sound of things going out of control, of a medium pushing to its limits and breaking apart.” This is the final piece of what makes Deadly Premonition 2’s aesthetic and mechanical hiccups so compelling. It’s fundamentally flawed in an undeniable way, but these flaws are what makes it special. A 2005 game, released in 2020. Just like it says in the title, the game is a blessing in disguise.

READ NEXT: 15 Weirdest Video Games Ever Made