Dead Island 2 Should Bring Back The Analog Control System

Possibly the most specific, niche thing I've ever written. 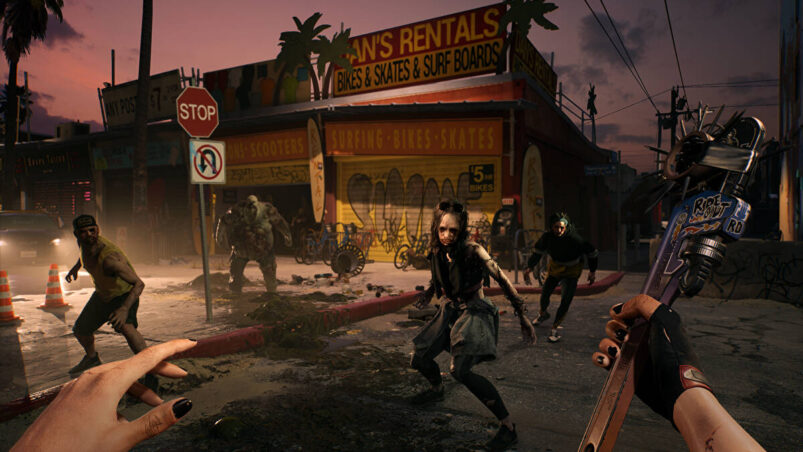 We can’t be the only ones still reeling from the fact that Dead Island 2 was officially re-revealed in the year of our Lord 2022. Not only that, but it’s scheduled for release early next year too. Naturally, we’re only going to believe that the game is actually real once it’s in our hands and playable, so for now, we’re just going to have to contend with the reveal trailer and information we’ve already received.

Dead Island 2 looks to continue the zombie slaying co-op action of the original game, only replacing the tropical island of Banoi with Los Angeles, and the City of Angels certainly doesn’t look so heavenly when the dead are walking the Earth. While current DI2 devs Dambuster Studios may be tempted to look towards how original Dead Island developer Techland reiterated on the formula with Dying Light when creating Dead Island 2, their best idea might be found by going back to the source: Dead Island’s analog control scheme.

For the uninitiated, the analog control scheme was a method of attacking in Dead Island that replaced the traditional “press buttons/triggers to attack” with something a bit more interesting. Players would hold down the left trigger to target an enemy, then use the right analog stick to control their attack movements. Think along the lines of EA’s Fight Night series and you’re about there, only replace boxing gloves with flaming spiked baseball bats.

The results were, well, to be honest, they were clunky and a bit fiddly to use. The main problem was the fact that you needed to lock on to a zombie or enemy in order to start attacking, but in a game where threats come at you from all sides and you need to keep your head on a swivel, locking on can sometimes be a death sentence. Imagine trying to turn to the right, only to charge a swing with your weapon because the camera and the weapon controls are the same.

By the sounds of that paragraph, having an analog system in Dead Island 2 might come across like more of a detriment, but the control system had a lot of potential. Instead of just simple slashes and strikes, the analog system allowed for much more complicated attacks like uppercuts and low sweeps, along with more targeted strikes on a zombie’s limbs. The analog system made it much easier to dissect a zombie, picking apart their weak spots before going in for the kill.

Those Fight Night comparisons become even more apt if you play as Sam B, who had a special power that allowed him to punch zombies and send them flying. With the analog control system, his punch felt much more satisfying than just the Who Do You Voodoo? singer wildly throwing haymakers into the zombie horde. Sometimes it’s just nice to be able to vary up your punches, you know?

The analog control system felt like a flawed but ambitious way of making Dead Island’s combat feel more immersive, kind of in a similar way to VR. Sure, the analog stick is never going to truly recreate human actions on a 1:1 scale, but having more control over the force and direction of your attacks is certainly a lot more interesting than hitting the right trigger/R2 repeatedly until all the enemies fall over.

Truthfully, it’s probably unlikely that Dead Island 2 will feature a return of the analog control mode, especially considering the game’s only out in a few months, but it would be nice to see a faulty system that had a lot of potential receive a second chance to shine on perhaps a grander stage. Of course, I’d only use it to smack zombies in the legs all day to watch them fall over, but that’s besides the point.

READ MORE: 32 Best Zombie Games You Should Be Devouring