Even if it may take you quicker than an afternoon nap to dust off, Darq is an experience that horror fans won't want to miss. 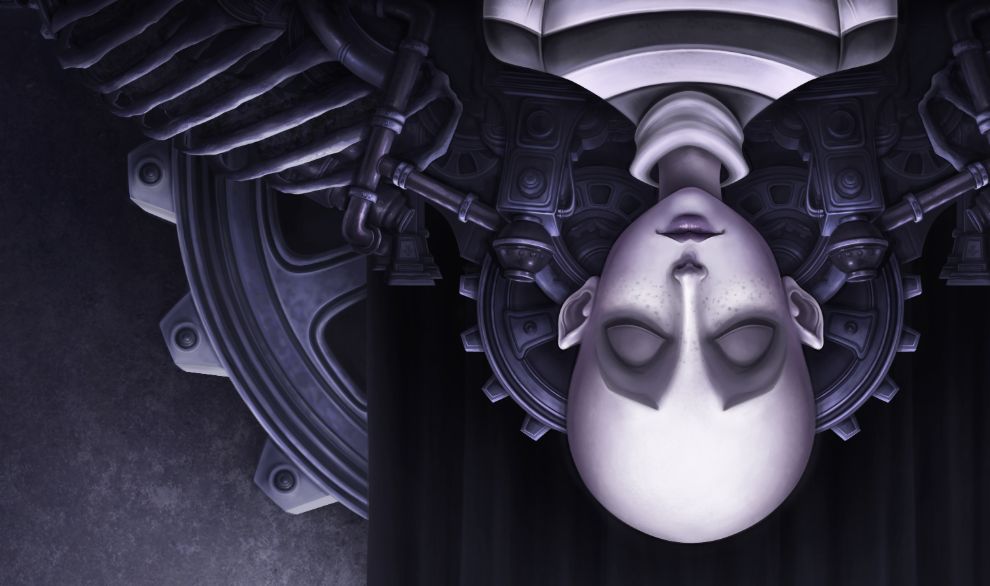 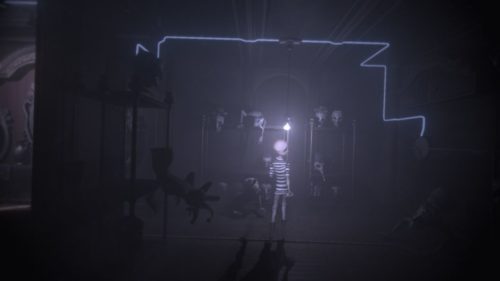 A lot of us look forward to our dreams at night. My personal favourite (and weirdly recurring) dream involves me worrying about having to take my maths GCSE, only to wake up and happily realise that I am 27 year old guy who already scraped through the exam well over a decade ago. But what if I couldn’t escape the dream? What if I was trapped in my dream with no escape, forever failing to do long division? That’s the exact premise Darq, a side-scrolling horror puzzler, provides as we are pushed deeper and deeper into the worried mind of a young boy.

Well, I say “exact premise”, but semi-nude grandmothers wheeling after you and lampshade-headed women with pistols is a bit more extreme than dreaming about forgetting what algebra is. Inspired by the likes of Little Nightmares and Inside, Darq may at first look a little familiar, but its gravity-shifting mechanics and grimace-inducing creature designs are just two of its features that help it stand out. 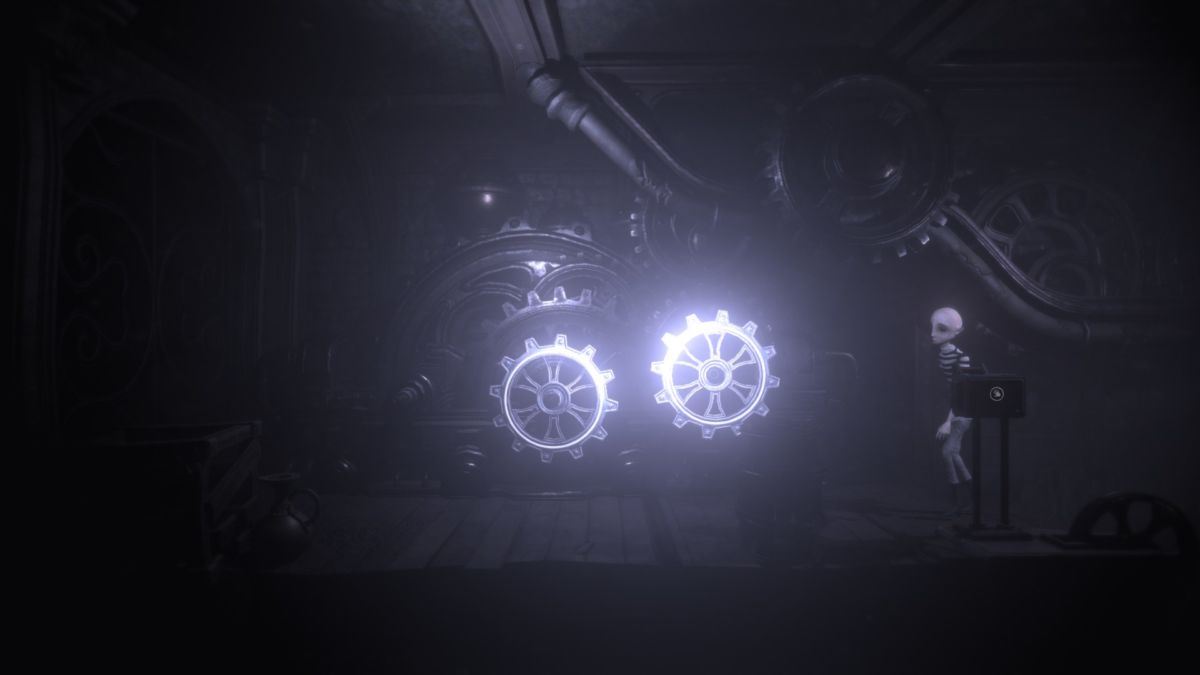 You play as a bald, incessantly distressed young boy by the name of Lloyd who realises that he is trapped within his dreams. You wouldn’t know this without first looking at the official description, however — Darq really doesn’t explain itself in-game at all. There are a lot of aesthetic hints to suggest an overarching storyline related to problems in Lloyd’s family life, but I was never really able to stitch it all together.

This basic setup instead allows Unfold to go a little wild with not only the increasingly unsettling imagery it chucks at you, but also in how deep and complex the mechanics can logically become. Darq’s main gameplay hook is the ability to walk on walls to reach different places. This is evidenced early on when there’s a gap you cannot cross, but instead a switch you can flip to close a door, which you can then climb up and then onto the ceiling to eventually reach the other side. Darq will often have you indulging in a light smirk when you figure out one of its many ingenious puzzles. 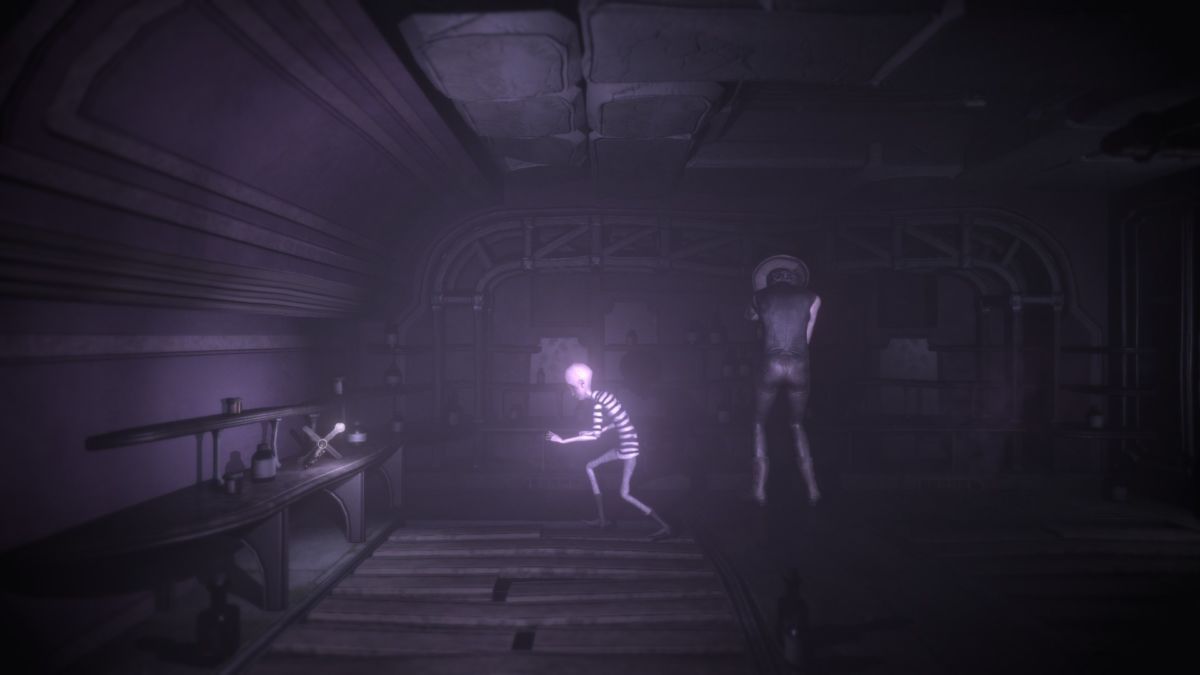 One such puzzle isn’t the biggest and most complex puzzle the game has to offer, though it stuck with me all the same. On a train level, I had to get to a particular area but only had a toy piano in my inventory. As Darq takes place in a dream world, I realised I could place it on a small platform and watch it expand into a full-sized piano. After flicking a switch to change the perspective of the room, the piano (which was now upside down) crashed through the floor to reveal a secret passageway. The aforementioned semi-nude grandmother awaited me, though, so maybe I should have just stayed where I was.

Darq’s enemies feel like slightly more PG versions of what stalks the streets of Silent Hill, deformed humans morphed with random objects to chilling effect. The wheelchair motif pops up a few times in regards to the delinquents of Darq, but there’s also a giant human-bird in a top hat, a decayed-looking man who shields his eyes, and a Trick r’ Treat inspired young boy with a covered face. You have no means of defending against them apart from hiding or sneaking away from them, though the generous checkpointing means that failure isn’t a nightmare. 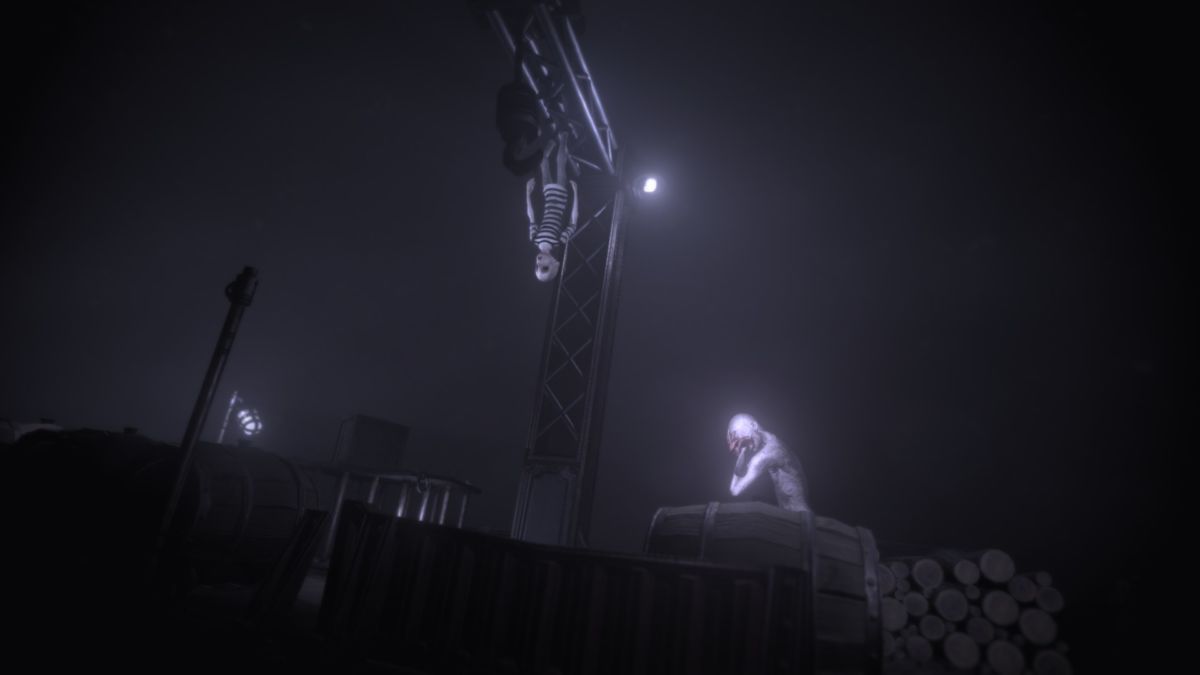 While Darq is undeniably a horror game, it’s a horror more in The Witch vein than The Conjuring: there’s some tension throughout but few scares until right at the end when it becomes a bit of a pulse-pounding terror. For its majority, Darq doesn’t really seem to want to scare you that much, it instead keen to showcase its puzzles and allow you to soak in its noir, Burton-esque atmosphere than gasp at its creatures, which appear sporadically. Darq is terrifically unnerving when it begins and near its end, but there’s little to quicken the heart rate in its middle third, which is when the game in general sags a little. Luckily, the game reinvents itself so you can’t get too complacent.

Just when you think you have the wall-climbing figured out, Darq introduces levers to completely flip your perspective around and move you from plain-to-plain. You only ever move along a straight path, but some levers allow you to go forwards and backwards to discover new areas. These turn rather simple looking levels into engaging, multi-faceted puzzles where you have to sequentially pick up X to put in Y and then enable Z. As someone who usually doesn’t agree with puzzle-centric games (see: not good at maths), I found Darq to strike a fine balance between being mentally taxing while never making the solution too far out of reach. Sure, you may have to backtrack a fair bit, but Darq’s morbidly beautiful environments mean it never feels like a slog. 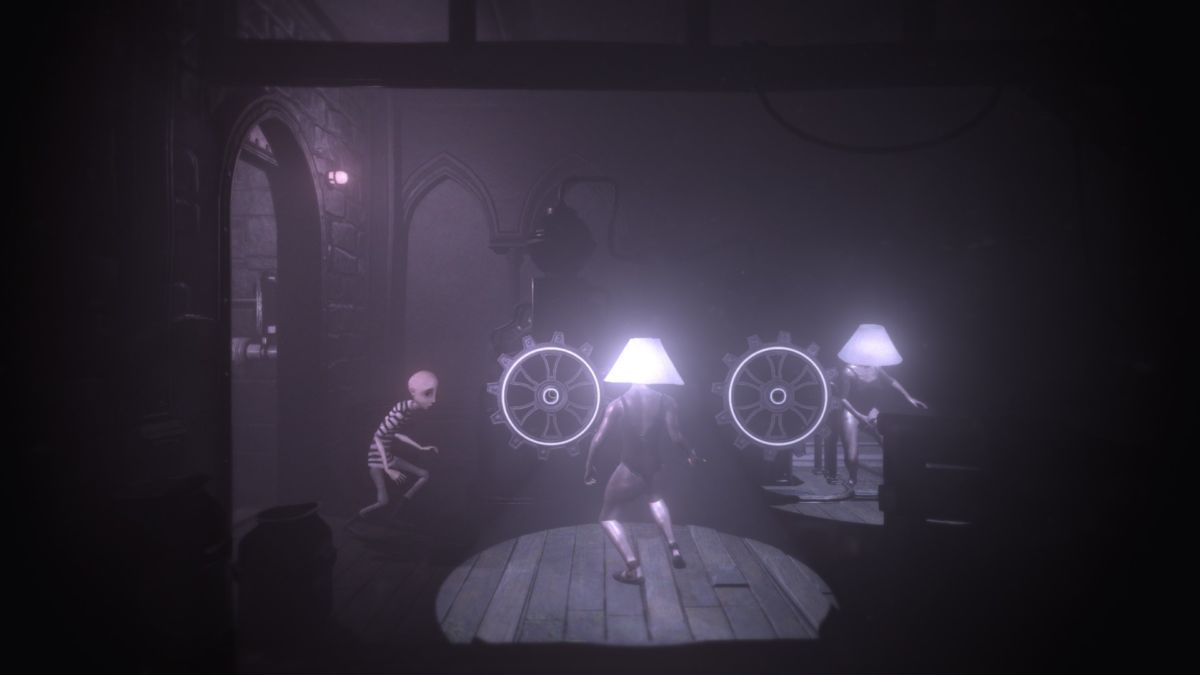 It’s a shame, then, that it’s all over so soon. Consisting of just seven levels, Darq never really gets into a deep sleep before the credits roll, it being beatable in 2-3 hours, maybe even less if you have a galaxy brain. This brevity is compounded by the fact that it doesn’t feel like you’re nearing the end — I was still waiting for a bit more blatant storytelling by the time I reached the final level.

Despite its short length, Darq is a horror experience that will probably stick with you far longer that it takes to complete. While those who love all things Playdead will probably gravitate towards this the most, Darq has enough innovation backed by a uniquely grim style to make it something that all fans of horror shouldn’t sleep on.

Verdict
Even if it may take you quicker than an afternoon nap to dust off, Darq is an experience that horror fans won't want to miss.
8