He's only just getting started. 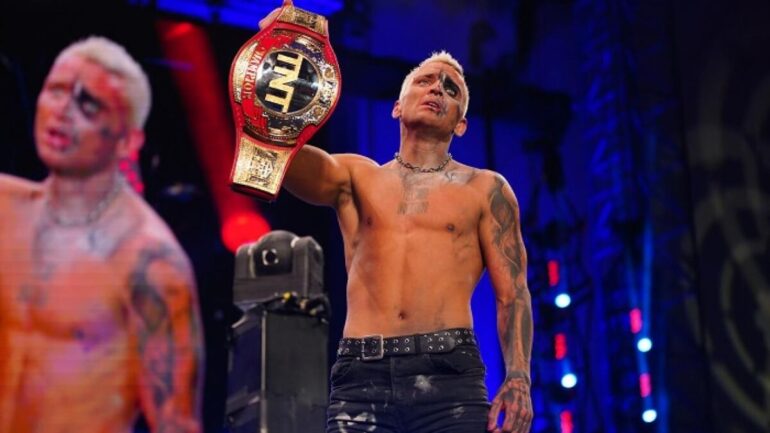 As TNT Champion, Darby Allin has gone from strength to strength, with AEW’s ‘Enigma’ transforming into the perfect example of a fighting champion. He has rejuvenated the championship after it stagnated in his early reign, with the addition of exciting weekly defence.

The likes of John Silver, Jungle Boy and most recently Dark Order’s 10 have stepped up to the champion in a succession of great AEW Dynamite main events. In fact, Darby has headlined Dynamite episodes more often than some of AEW’s more established top stars, with only a few doing so more than him. This has been thanks, in part, to his recent weekly title defences, but he has main event experience beyond this too.

Darby has elevated himself, fellow wrestlers and the TNT title as a whole in his reign to date, but how has he done it?

In 2021 so far, Darby Allin has defended the TNT Championship a grand total of nine times against a great list of opponents: Brian Cage, Joey Janela, Scorpio Sky, John Silver, JD Drake, Matt Hardy (in a Falls Count Anywhere match), The Butcher, Jungle Boy and 10. With the exception of his defence against The Butcher (which took place on AEW’s inaugural house show), each was wrestled on the promotion’s flagship TV product.

Weekly title defences are a fundamentally sound, and delightfully successful way of establishing a champion and their title. AEW did the “fighting champion” gimmick with Cody’s TNT title run last year, but Darby’s reign has been paramount in lifting him and the championship from a short-lived regression in Allin’s early days as champion.

When you look at the list you see a real variety of talent, which speaks volumes of Darby’s work ethic and sheer skill as a pro wrestler. The “fighting champion” moniker has been placed upon many a titleholder in wrestler history, whether it be John Cena and his famous US title run in 2015 or Samoa Joe and his spectacular ROH World title reign in the early 2000s.

Doug Williams, Asuka and RVD have all had memorable “fighting champion” reigns too, but I think Darby stands out as special among this crowd. AEW’s ‘Enigma’ clearly isn’t the first champion to defend his gold on a very regular basis, but he’s perhaps the best AEW has had in its short history so far.

As I’ve noted, the collection of talent Darby has defended his championship against is one of the key reasons his title reign has been a success. Merely casting a passive eye over the list of Darby’s nine title challengers makes clear that he has faced very different wrestlers from one week to the next. From Matt Hardy and Joey Janela to Jungle Boy and Scorpio Sky, the list is noticeably varied.

This is evidence of Darby’s versatility as a pro wrestler – he can wrestle different styles and structures against different (and unique) opponents. His Falls Count Anywhere encounter with Matt Hardy was wrestled like a hardcore brawl, whereas his match against Jungle Boy, just seven days later, took on a more archetypal “indie” style.

This speaks to both the strength of Darby Allin as a champion, and the title as a whole because they give opportunities to promising young wrestlers, like Scorpio Sky and John Silver, a chance to battle in spotlighted situations. As champion, he has gained valuable experience that’s being shared with similarly youthful and rising-star roster members.

Matt Hardy is of course an example of an already experienced wrestler challenging for the TNT Championship, raising the stocks of Allin even further than they already were. Of course, Darby knocking off established talent is a surefire way of moving him up the ranks in the fans’ mind and in kayfabe with the win/loss ranking system.

When we speak about raising the stocks of Darby Allin, look no further than Sting. The ‘Icon’ has aided the TNT Champion greatly, delivering a great aura of legitimacy to one of AEW’s most promising young stars.

The unique, cinematic Street Fight pitting Sting and Darby Allin against Team Taz’s Brian Cage and Ricky Starks is testament to the wealth of upside Sting has to give to his young ally. This in turn raises the image of the TNT Championship, because the champion is presented as a real top star of the company, so that championship is seen as a top prize too.

Sting has developed his own image in AEW, while using his experience, legend status and popularity to raise the stocks of Darby Allin simultaneously. This is phenomenal, but importantly Darby is in the lofty position he finds himself in today because of his own work.

Darby is already a top star. His ceiling is as high as can be, so there is much room for the ‘Enigma’ to grow, but his rise from a relative unknown to a huge star is already a meteoric one.

Darby debuted in AEW at 2019’s Fyter Fest event, fighting the well-established Cody to a time-limit draw of 20 minutes in a star-making performance. He later challenged Chris Jericho in a fiery Philadelphia Street Fight, for the grandest prize: the AEW World Championship, which helped consolidate his new found stardom.

Since then he has been elevated more and more through superb character work, including great promos and personality exploring vignettes, fantastic matches and sheer fan popularity. Truly, he’s now one of AEW’s top stars.

An explosive wrestler holding the TNT Championship – the perfect fusion for AEW’s rising star. Darby is the epitome of a “fighting champion”, importantly elevating himself and the title to the near pinnacle of the promotion.

READ NEXT: Why Randy Orton vs. Mick Foley Was So Important For WWE