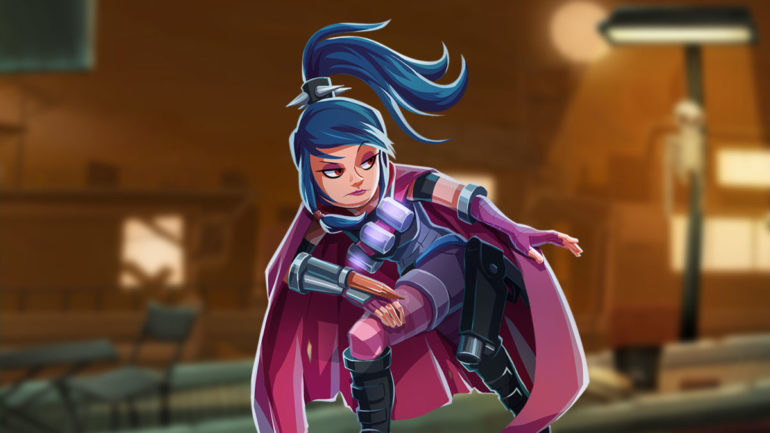 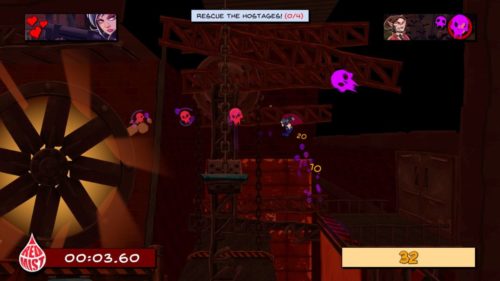 Just a quick glance at Damsel is enough to inform you that this game doesn’t take itself too seriously. The cartoon vibe ensures that it always has a sense of fun about it. Developer Screwtape Studios obviously wanted players to enjoy themselves getting stuck into the action rather than be immersed in the world, which is exemplified best by Damsel’s focus almost entirely on the gameplay.

That isn’t to say that there’s no narrative. Told through a small sample of comic panels after each mission, the story follows the titular Damsel as she investigates a large vampire-owned corporation. While humans and vampires have been able to live together in imperfect harmony, the Red Mist Beverage Corporation threatens that shaky peace. They’ve been kidnapping humans to harvest their blood to use as a secret ingredient in their bestselling drink Red Mist. 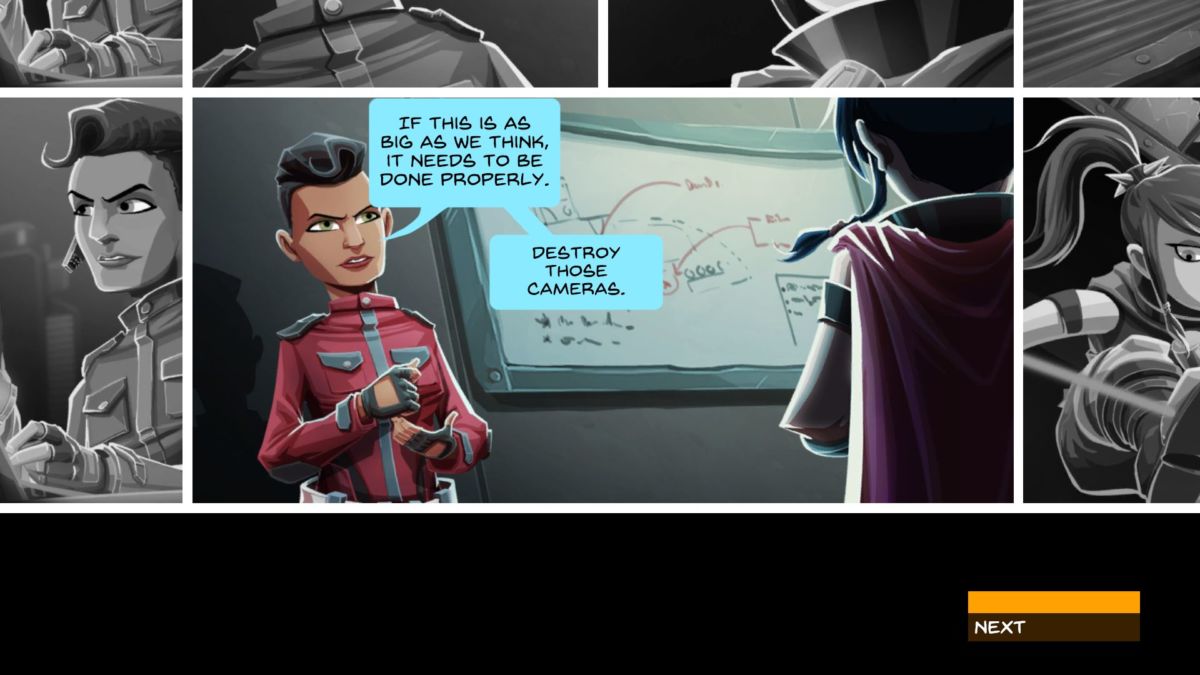 The premise is reminiscent of the moment in Blade: Trinity when we get a glimpse of the human farms. The idea of being kept alive to be used as cattle to feed a blood-sucking monster isn’t a particularly nice one. Some might argue it’s a worse fate that simply being bitten and turned into a vampire, but Damsel keeps things lighthearted so that things don’t get too grim. More than anything the story is there just to add some meaning to the constant flow of missions.

There are a total of 75 stages across three chapters. Each one only lasts around a minute, although you’re likely to need several attempts to beat many of them. The difficulty here doesn’t come from the combat. Fighting can become frantic later in the campaign but it is the fact you are constantly juggling several elements at once. Stages will have only one of a select group of key objectives to complete. You either have to wipe out all enemies, destroy coffins and cameras, hack computers, collect skulls, free hostages or defuse bombs. 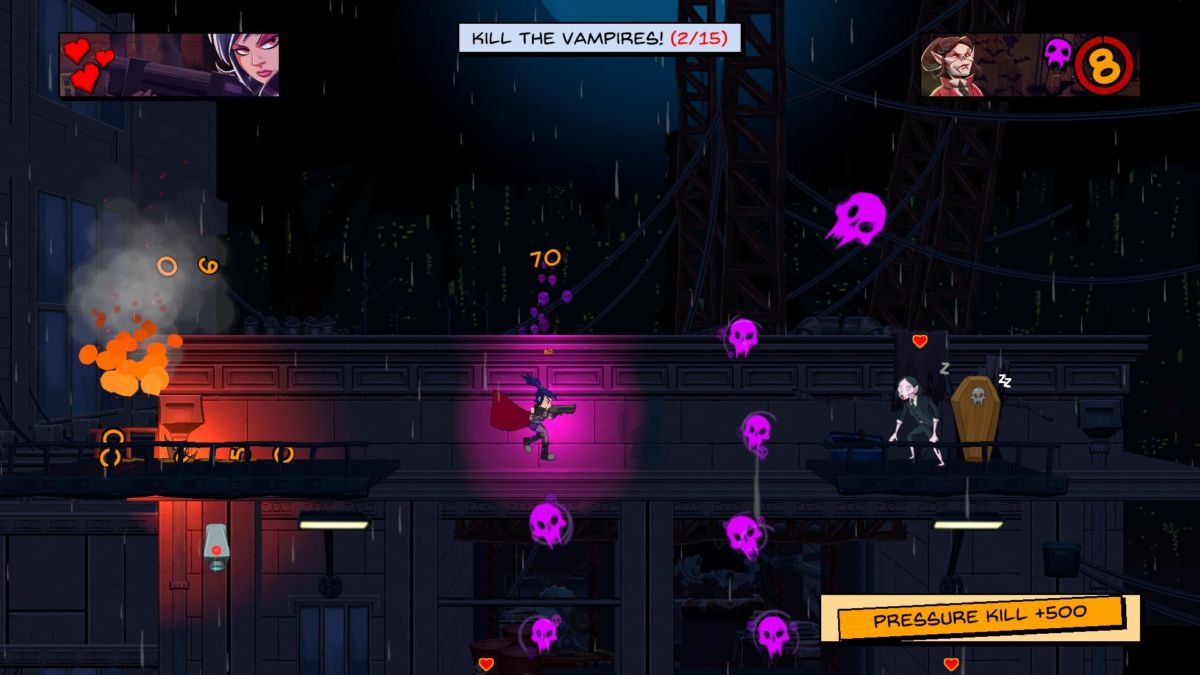 Despite there being just one set objective for each level, you’ll end up having to manage others during playthroughs. That’s because bombs and hostages will still show up when they are not part of the mission goal. Sure, you can ignore the hostages, as rescuing them isn’t required for some missions, but you still have to be careful where you are shooting. One stray bullet will kill them and require you to restart. Likewise, setting the timer on a bomb by getting too close will almost certainly mean you’ll have to defuse it, unless you can finish the level in the 15 seconds before it blows.

This constant need to be aware of everything that is going on in a level keeps you constantly on edge. There is never a moment to breath in Damsel, as each level ends up being tense and chaotic as you try to decide which is the best way to approach the various problems. Ultimately, it creates a really enjoyable experience where you gain a huge amount of satisfaction from beating your previous best attempt. Comparisons can be made with the likes of Super Meat Boy in that respect, as once you get into the groove of a level you just completely immersed in trying to slowly improve. 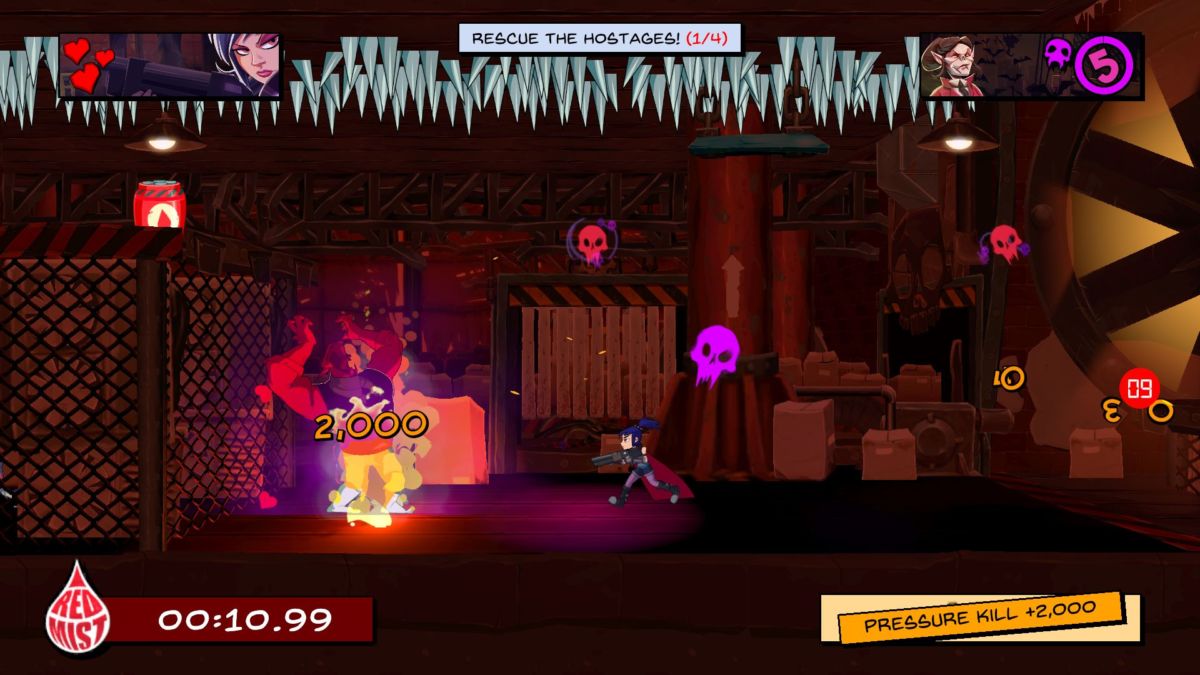 Considering how fast paced the experience is, it would have been easy to get bogged down with complicated controls and mechanics. Thankfully, the developers have opted to keep things fairly simply. You only have three abilities, and even melee attacks and shooting are mapped to the same button, meaning you only ever have to worry about using the A, X, and B buttons along with the thumbsticks for moving and aiming.

Some people might be disappointed that you don’t unlock more skills as you progress, however it ensures there’s a good flow to the gameplay and means you can quickly get very familiar with the mechanics. Intuitive controls and a more focused ability set also helps you to understand exactly what you need to do in each level, and the brief tutorial section in the first couple of stages is enough to prepare you for the rest of the game. 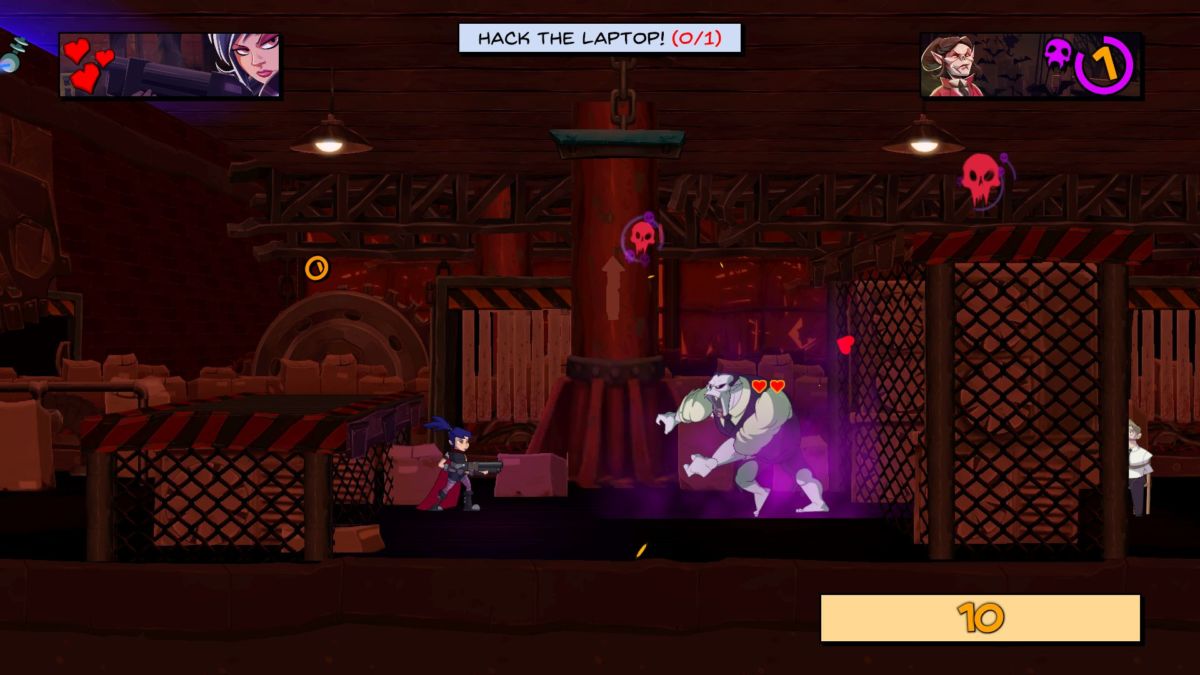 Outside of the campaign, Damsel has two other modes. Damsel Dash offers a different challenge each day, with assets from previous stages being reused, though the objectives and placement of enemies or items changes. The other is the Arcade mode, which uses the same levels from the campaign but only gives you a set amount of lives to see how far you can get. The aim in both modes is to rank as high on the leaderboard as possible, with finishing levels quickly, completing optional objectives, and collecting skulls will increase your score.

Screwtape Studios clearly want Damsel to be a game in which players come back to time after time to set new scores. The intense gameplay and bite size levels are built around this concept, as they allow players to quickly dive in and try to beat their previous scores over and over again. The main issue with this approach is that it doesn’t leave much room for variety. Whether it’s the fact that the Arcade mode reuses the same stages from the campaign or the limited range of enemies, each stage does start to feel a bit too similar to each other after you play for a while, so much so that the levels sort of merge together and there isn’t enough to make them distinct from each other. Perhaps the best way to avoid this is to play Damsel in small chunks rather than in big sittings. 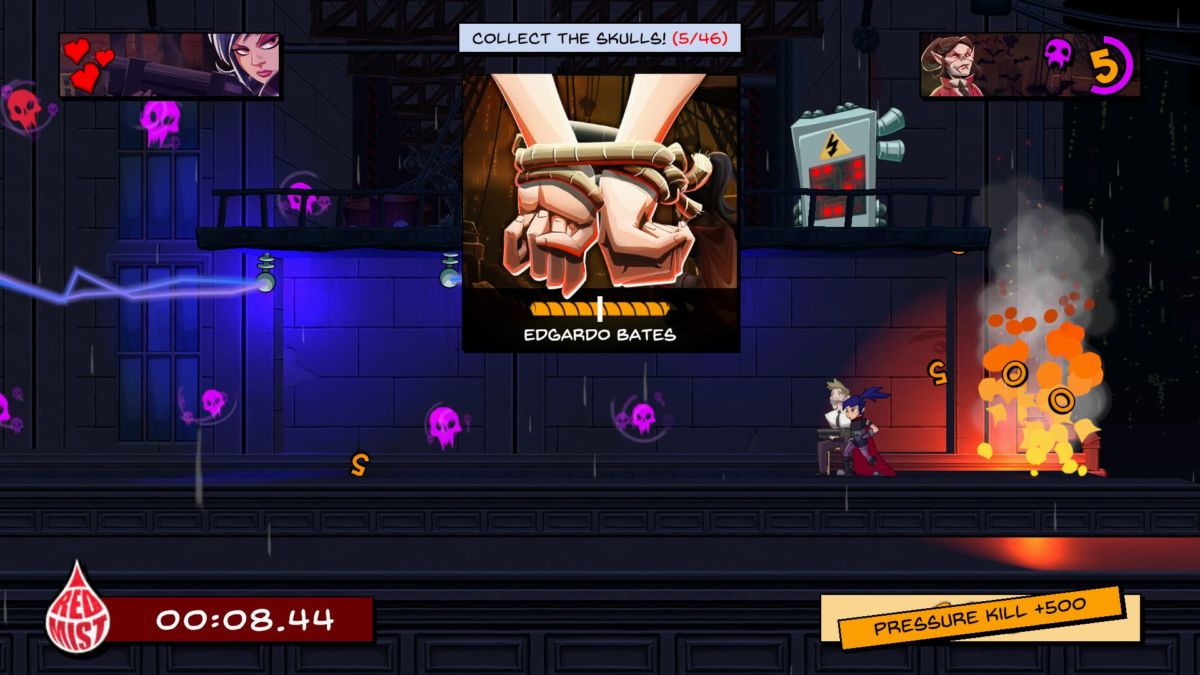 Less disappointing is the overall presentation. Damsel is visually slick and the distinctive style really helps its personality to shine through. There are tons of great looking special effects as well. Setting vampires on fire or blasting barrels for huge explosions provides a good deal of satisfaction. I didn’t notice any graphical hiccups either, while the animations all remained silky smooth throughout. The synth rock soundtrack is a perfect accompaniment for the visuals and setting. A thunderous boom that comes with each shotgun round ensures you get a sense of its power as you rampage through the enemies.

Although Damsel is a game that lacks some variety, it more than makes up for it with excellent gameplay and great presentation. While it is obviously suited to those with quick reflexes who love trying to climb their way up leaderboards, it’s accessible enough at the lower difficulty setting to still be fun for a wider audience. New daily challenges and strong encouragement to better your scores mean there is plenty of replay value for those who enjoy what the game has to offer and want to launch an assault on the leaderboards. What makes Damsel so impressive, though, is that it is such a stylistic and exciting game. It provides intense moments at a near constant rate, giving you a good idea of what battling an evil vampire corporation would actually be like. 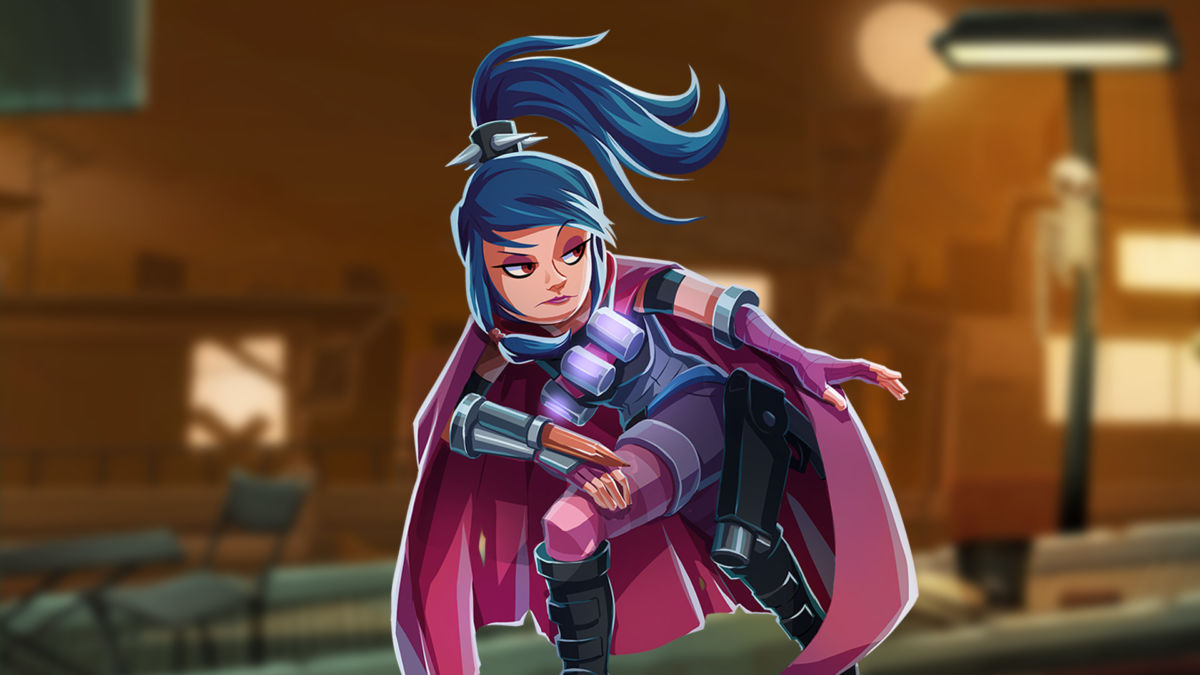 Verdict
Damsel is a fast paced and stylish affair that keeps your heart racing with intense gameplay, despite some eventual repetitiveness.
8