The CV Guide to Hayao Miyazaki

Animated feature films in the West tend to fall into two categories: a) Pixar and b) Everyone else trying to copy Pixar. There is no middle ground, so that means we either have to tolerate some rinsed morality tale featuring celebrity-voiced cars and animals learning how to be nice to each other, with a catchy song at the end. Televisual bastions like Adult Swim and South Park offer shorter, darker ways to push buttons but for the most part, the landscape is flat bar the occasional anomaly like The Lego Movie.

In Japan, however, animation can be used to tell any story the creator likes as unlike the West there is not one target audience but hundreds of them. And one man in particular is synonymous with the gold standard for versatility and imagination in telling stories through the medium of animation: Hayao Miyazaki.

Miyazaki, along with this production house Studio Ghibli, has been making awesome films for decades. Apparently, the 73-year-old won’t be making films anymore as he announced his retirement shortly after the release of his moist recent film, The Wind Rises, in Japan last year. We better hope and pray that there’s a young pup at Studio Ghibli with Miyazaki’s chops, as both world cinema and life in general are worse off now that he won’t be making films anymore. Oh noes!

Thankfully, the body of work left behind by the venerable animator is staggeringly good. You should watch all of the films he’s directed (not every Studio Ghibli film is a Miyazaki joint) but in case you’re unsure where to start, here’s an idiot-proof guide to selected highlights from the man’s work. 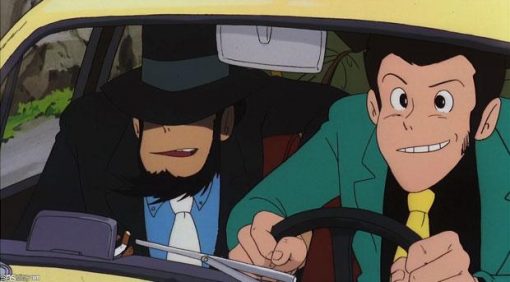 Fun fact: Miyazaki’s first outing as a director wasn’t a Ghibli picture at all but an adaptation of a much-loved icon of manga and anime: Lupin III. The Castle Of Cagliostro, released in 1979, was Miyazaki’s directorial debut but he also wrote, designed and storyboarded the film, at the time one of the most expensive animated films in Japanese history. The story is centred around gentleman thief and loveable rogue Arsene Lupin the Third and his attempts to foil a crime lord holed up in the titular castle.

The film has hardly any of the story tropes that Miyazaki would become known for (humanity’s relationship with nature, morally ambiguous antagonists, strong and/or interesting female characters) but it does bear his attention to detail and gift for spectacular set pieces and is huge fun from start to finish.

THE FAMILY FAVOURITE: MY NEIGHBOUR TOTORO (1988)

Charming, understated and whimsical to the point of rapture, My Neighbour Totoro is a masterclass in how to make a film for children that speaks their language without treating them like morons. A pair of little girls move to the countryside and make friends with a mysterious forest spirit, and not a great deal else happens.

It doesn’t need to, as Miyazaki guides us through the story with near-holistic effortlessness. Interestingly, the film was originally released in 1988 as a double-feature with Grave Of The Fireflies, a harrowing tale of two children trying to survive in the rubble of post-war Japan. Since then, it has gone on to find its own destiny and Totoro himself is now to Studio Ghibli what Mickey Mouse is to Disney.

A film as comfortable in an arthouse cinema as it is in the family DVD collection, this as close as any movie gets to comfort food and a warm, lasting hug.

If My Neighbour Totoro was Miyazaki’s gentlest smile, the film he made nearly 10 years later was his fiercest scowl. Princess Mononoke is a dark fantasy with plenty of nightmare fuel to spare as the director rails against humanity’s greed and warmongering at the expense of the natural world. The film’s opening sequence, in which the hero attempts to fend off an attack by a vengeful demon, is tense and laden with moments of horror, and things only get darker from there on in.

Never one to indulge in mindless violence for the sake of it, Miyazaki is in give-no-fucks mode here as people are subjected to decapitation, dismemberment, demonic possession and natural disaster, but such moments of brutality are juxtaposed with images of incredible beauty and wonder as Miyazaki reminds the viewer that the natural world can conjure up things far more wonderful and intimidating than anything humanity is capable of. The fearsome creativity at work here clearly took a lot out of Miyazaki as he announced it would be his last film as director. Or so he thought, as he would return a few years later to make the film that would finally cement his reputation worldwide as a genius.

THE MASTERPIECE: SPIRITED AWAY (2001)

Exactly which film is Miyazaki’s best is the subject of much debate, but as far as this writer is concerned, Spirited Away is far and away his crowning achievement. It almost works as a greatest hits of sorts as every storytelling trick and technique that Miyazaki learned or became known for over the course of his career is deployed here in masterful fashion. As with many Miyazaki films, at its core it’s a wonderfully inventive children’s story but the sheer amount of creativity on display here is gobsmacking. Alongside the incredible visuals is an inspiring, uplifting message about the value of hard work and perseverance.

The highest-grossing film of all time in its native Japan, it remains Miyazaki’s biggest commercial success to date and won the Oscar for best animated feature at the 2002 Academy Awards. Perhaps sensing that he had nowhere else to go in terms of sheer brilliance, Miyazaki announced that he was once more out of the game and retired.

Fate, however, had other plans.

For the follow-up to Spirited Away, Studio Ghibli opted to adapt a book by English children’s author Dianna Wynne Jones, reportedly one of Miyazaki’s biggest influences, and the director for the project would be Mamoru Hosoda.

At the time, Hosoda’s biggest gig had been directing episodes of the crass Pokemon rip-off Digimon and not long after production began, he abruptly left the project after the top brass at Studio Ghibli felt that he was unable to cut the mustard. Miyazaki was handed the directorial reins and once again came out of retirement. The end result is a colourful, complex movie that at times struggles to hold its own against Miyazaki’s other works. There were so many ideas and themes at work in the film that shoehorning them into two hours was a challenge.

The irony, of course, is that Miyazaki is one of those filmmakers like Tarantino, Scorcese or The Coen Brothers: him on a bad day is everyone else on a good day, and there is still plenty about the film to make it worth your while.

THE ENIGMATIC FAREWELL: THE WIND RISES (2013)

I recently reviewed Miyazaki’s The Wind Rises so in the interests of avoiding repetition I’ll avoid saying too much about it here other than to say that, upon reflection, I may have been a little too harsh on it by calling it a ‘flawed masterpiece’.

Whatever flaws the film has are so slight as to be almost imperceptible, and the movie is a perfect final bow as Miyazaki closes the book on his directorial career with the dignity and thoughtfulness that is one of his trademarks.