Don't let it get the better of you. 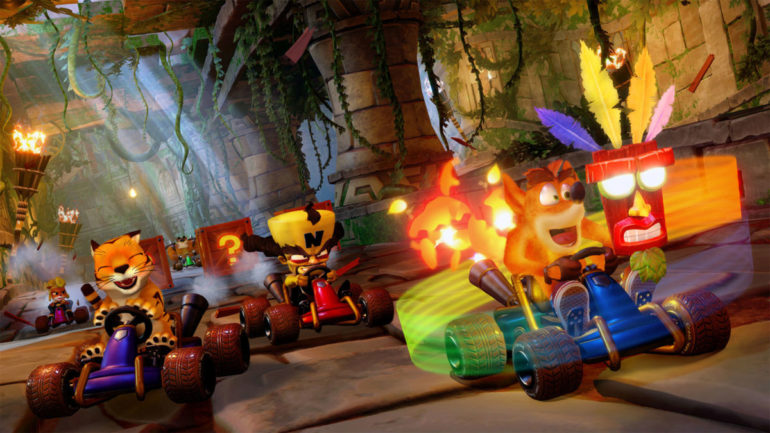 Released today (June 21st) for PS4, Xbox One, and Nintendo Switch (I almost called it the “Nitro Switch”, that’s how on my brain this game is) Crash Team Racing Nitro-Fueled did exactly for the kart racer what N.Sane Trilogy did for the platformer. It brings a classic back with a new lease of life, all while making some of us question whether we were always this bad at the game to begin with.

Developed by Beenox (the original game was the work of Naughty Dog), Crash Team Racing Nitro-Fueled stays true to the original CTR formula, which is providing a kart racer so fiendishly unfair that it makes Mario Kart look like Coffin Dodgers. Okay, maybe not, but CTR was designed to cause the most friction between friends and its remake wholly knows this, it causing several rifts in the Donnellan household in no time.

If you’ve been struggling to get to grips with Nitro-Fueled after a lifetime of Mario Kart or having not played CTR at all in two decades, here are some quick and painless tips to help you out in this excellent kart racer remake. Look, all of the tips in the world aren’t going to stop you from getting missiled three times in twenty seconds, okay?

1. Boost, baby
Quite simply the best Nitro-Fueled tip I could give, you need to lean on the power slide boost if you’re to have to any hope of getting first place.

It takes a little getting used to, but if you are about to enter a corner, hold down your hop button (L1/R1, LB/RB, L/R depending on your platform) while also holding the direction down in which you want to drift.

Once you see black smoke, press the opposite shoulder button. So, if you’re sliding with L1, press R1. You can then press this multiple times to get a significant speed boost, but you still need to time it properly while continuing to hold your slide button.

Can be fiddly, but you will get it down to a science soon.

2. Collect the crates
No, not the power-up crates: The “striped crates” that are typically a lot less numerous on any given track. You want to try and get these crates if you can as they give you Wumpa Fruit. If you get ten Wumpa Fruit, you get a speed boost and your power-ups are also more effective.

There is a risk/reward factor with this, though, as these crates are usually not on the optimum path for speed, so you may have to weigh that up first.

3. Jump up and down
It’s rare for a Crash Bandicoot track to be completely straight, so expect plenty of bumps along the way, which can sometimes include some big jumps. If you jump just before the ridge of the jump, you should propel yourself forward and also get a nice speed boost upon landing.

If you can find a way to squeeze in a jump after just doing a sustained power slide, you could possibly go from last place to first; the speed boost is that beneficial when combined.

The AI seldom seems to do that on medium difficulty, so take advantage of the small margins when you can.

4. Travel in the slipstream
An old racing game classic mechanic, this one. If a racer is directly in front of you and has just used a speed boost, they will often have a slipstream that you should slip into for a speed boost.

It may not necessarily help you speed past them, but it will certainly keep you at the right pace.

5. Save your ballistics
A kart racing necessity here. If you’re neck and neck with someone and trading first and second place, be careful with how you use your pick-ups, and also how you approach crates. If you go through a crate while in first place, you won’t get much worthwhile, but second place is another story.

If you think you can naturally overtake first place, don’t use your missiles immediately to do so. Instead, save them for if they end up going past you again so you can set them back.

Similarly, if you have beakers or bombs, these can be placed behind you by holding down on the d-pad/analog stick and the use button (circle on PS4, A on Switch, B on Xbox One).

6. Give yourself a headstart
Is it even a karting game unless this is a little mechanic for the start of the race?

While you’re waiting on the starting line, wait before you rev your engine right up until a split second after the final red light appears and just before it turns green. This will give you a distinct speed advantage from the off and boost you away. The AI doesn’t always take advantage of this, so you really ought to.

Crash Team Racing Nitro-Fueled is available now for PS4, Xbox One, and Nintendo Switch. Check out some of the other biggest new games of June 2019 below.