It's Halloween, so we took a look back at one of the more light-hearted takes on the vampire genre. 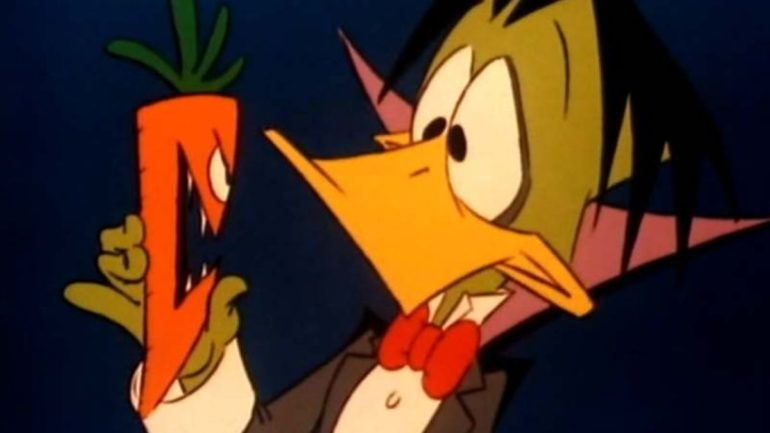 I wouldn’t have thought that cartoons about vampire ducks would be such a popular subject, but I just learned about 1979’s short-lived Quacula, from The New Adventures Of Mighty Mouse And Heckle & Jeckle. So, I came here today to talk about the one I grew up with. A show I remember fondly, but hadn’t seen in forever — it’s time to get spooky in Transylvania with Count Duckula.

As a kid, I never realized how much British television we got here in the states, but I remember that opening image proclaiming that the show was produced by Thames Television. Count Duckula spun out of Danger Mouse, another fun series from Cosgrove Hall Films. In that show, Duckula was a much different recurring character, villainous, but he would undergo an extreme change for his own show. He’s still a vampire duck who wants to find stardom in show business, but an infusion of tomato ketchup took away his evil nature and desire to suck blood. I’m not sure why I’m explaining all of this when the intro does such a good job:

The opening comes across as an epic tale, similar to the material it parodies, an intro that tells the character’s origin in an engaging way and doesn’t need to do it in over the course of an episode or two. Duckula’s theme also expresses the fun tone and hits those horror themes so well—it’s an instant classic. What other series shows occult symbols, a bull riding a unicycle, and the protagonist dying twice in its opening? The outro carries on where the intro left off and sends the viewers home happy.

Geraldine Laybourne, the head of Nickelodeon though the 80s and most of the 90s, wanted the network to receive another show from Cosgrove Hall Films. After going through several ideas, she saw a picture in Brian Cosgrove’s office. Count Duckula had caught her eye and the rest was history. Early on, one of the writers found that extra level of silliness for a vampire character by making him a vegetarian. This one decision seemed to set the tone for everything else that would come afterward.

The humor shown is very British, almost anachronistic in a way, like a timeless play, resembling that of Shakespeare’s works—each adventure being a comedy of errors. This is usually because of the Count having some new scheme, falling for something, or ridiculous characters showing up to do everything wrong. They occasionally break the fourth wall and nod at the camera as if to make sure the joke was appreciated. I’ve always thought foreign cartoons seemed more intelligent, knowing viewers are often eager to consume and learn. Re-watching Duckula, I think the creators weren’t focused on making a kids cartoon but something more for all audiences.

Each tale saw the main trio of characters heading off on a new adventure out of boredom, random happenings, or the search for fame and fortune. Count Duckula, Igor, and Nanny don’t fit together particularly well. Rather, their chemistry is based on how their differing goals and personalities keep them apart while familiarity insists that they stay together. Duckula doesn’t want to be a vampire, having his eyes set on celebrity status, acquiring items, and his vegetarian food. Igor yearns for the days of his ruthless masters, encouraging his new boss’s more sadistic side. Nanny is caring and protective of her Ducky-Boos, but quite dimwitted as well, leaving her at odds with the other two. She is a special level of dumb, occasionally charging through walls to enter a room even though there is a door right next to her, but does have a couple of episodes where she is, oddly, the reasonable one.

These three have a sense of loathing for each other, but never enough to spend the effort to leave or find other friends and family. They’re bound to each other and even though their sniping comments can borderline on hostile aggression, they always end up back together. Each character upsets the flow for one or both of the others and many of the traits Duckula shows are just as bad as the other two, no matter how he sees himself. This kid-friendly cartoon often teaches kids how to be petty and sarcastic. A deeper look shows how Duckula is concerned about not living up to the reputation of those who came before him, even though he’s nothing like those monsters—well, he doesn’t drink blood at least. In many ways it’s about death, leaving a legacy, and not blindly following what is expected. The show’s best underlined theme is how it says that it’s okay for someone not to know what they want to do with their life.

There are some wild personalities in the show past the three protagonists. Duckula has several enemies, those who want to steal from him or send him back to the afterlife. Although Igor endeavors to turn Duckula into a monster like his ancestors, he would never want to hurt anyone. He’s so unlike other vampires that he can actually go out in sunlight and doesn’t share the powers of those who came before him. The main antagonist, Doctor Von Goosewing (a parody of Dr. Abraham Van Helsing) sees his nemesis as purely evil and refused to believe that this new Duckula is any different than the others. As a vampire hunter—and quite the talented inventor—he blindly concocts schemes to destroy the Count, even though Duckula rarely fights back.

There are other odd people or supernatural creatures that pop up to cause trouble in direct forms or just causing turmoil between the main characters. This ranges from zombies, thieving crows, mechanical werewolves, aliens, a Frankensteinian monster, as well as an interior decorator that Igor and Nanny can’t stand. There is also the castle cuckoo clock, that has two bat-like figures that emerge to tell (bad) jokes and comment on the episode, breaking up the story.

The castle is its own character, with massive halls, gothic style, and unique abilities. The structure can teleport to any location and with the aforementioned cuckoo clock can manipulate space and time, but no matter where it takes the heroes, it always returns to its original spot in Transylvania at dawn. This fun mechanic gave the writers a lot of freedom and helped make sure the show had less chance of becoming stale, with the characters always winding up in new and strange places. I was surprised how quickly they were sent into space.

Count Duckula thrives on its wacky situations, a vast array of comedic stylings, and outrageous personalities. Those characters are brought to life by some great voice talent that may not have been well-known in the states. David Jason voiced Count Duckula and was known for his live-action role in an odd little show called Only Fools and Horses, but in the realm of animation, I remember him as Mr. Toad from The Wind in the Willows. Jason was destined to play the title character, as he had already portrayed Duckula in the episodes of Danger Mouse, and was the voice of the rodent spy himself.

Brian Trueman provided the voice of Nanny as well as a few others here and there for various shows, but he might better be known as a writer for Danger Mouse, eleven episodes of Count Duckula, and Thomas the Tank Engine and Friends. Jack May played the part of Igor, my favorite character, known mostly for his live-action roles in The Man Who Would Be King and Adam Adamant Lives! Rounding out the cast is that wonderful narrator voice by Barry Clayton. The iconic intros were meant to parody Vincent Price, who was supposedly outraged at not being approached to provide the voice himself. Apparently, he would have accepted.

The group seemed to genuinely enjoy working on the show and that comes through in many of the episodes as we watch the chemistry of the performers, humor, and how crazy they let some of the plots get. There are plenty of references and nods to a variety of different things throughout the series, especially other pop-culture bits. Each episode has a theme, but I was often pleasantly surprised with the versatility, art history jokes to literature-based stories like Jack and the Beanstalk, Sherlock Holmes and The Phantom of the Opera. The strangest piece of trivia might be that the skeleton appearing in the end sequence is supposed to be that of Michael Jackson.

Airing from 1988-1993, Count Duckula ran for four series, totaling up to sixty-five episodes, each running about twenty-two minutes. The full run of the show was released in the UK while only the first season (26 episodes) was put out in the United States. Not only did America not receive the entire show on home release, but the DVDs can be a tad pricy and harder to track down than their region two counterparts. Not wanting to spend too much money and living in a world of streaming services now, I checked online and was pleased to see it available for everyone. I re-watched the cartoon in its entirety on YouTube where it has been uploaded on Count Duckula’s very own (legit) account.

The episodes have been digitally remastered and touched up. It shows a little more in some parts than others, but overall everything looks good. I love the thick lines and bold colors, as well as the use of negative space and sketches for backgrounds. It reminds me of Mike Mignola’s art style – best known from his work on Hellboy.

Duckula was popular back in his days, spawning two PC games—news to me—and a series of comics in North America by Marvel (under their Star Comics imprint). Just as Duckula was a spinoff of Danger Mouse, the duo of Gaston and Pierre would receive their own show, now appearing as human characters named Victor and Hugo. Not everyone was a fan, though, as outlets like the LA Times gave Count Duckla a poor review when it first aired.

In somewhat of a surprise, Count Duckula did appear on televisions again in 2015 as a guest of the Danger Mouse reboot series. This retooled version of the character was a mixture of his original incarnation from Danger Mouse and the Duckula we knew from his own show. It’s a shame that the new Danger Mouse didn’t also mean a new Count Duckula show and more adventures for their favorite vegetarian vampire duck, but at least he had a final encore in the spotlight.

Until something new comes along for him though, I enjoyed experiencing this zaniness again, and as the narrator always says, “Goodnight out there…WHATever you are!”